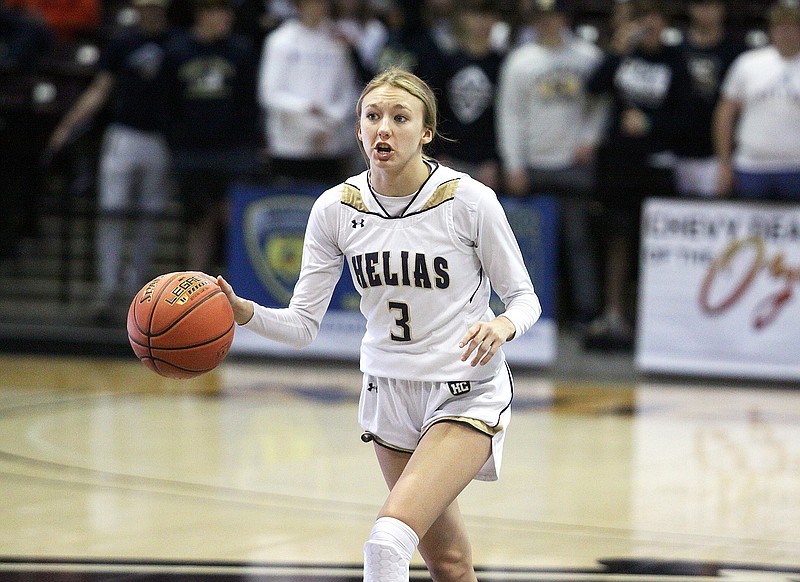 Mikah Edwards of Helias dribbles the ball up the court during the Class 4 girls third-place game against St. James last season at JQH Arena in Springfield. (Greg Jackson/News Tribune)

The Helias Lady Crusaders are coming off a Class 4 Final Four appearance.

Bumped up to Class 5, they are looking for a similar finish to this season.

“I hesitate to call it pressure, it’s more our expectation,” Helias coach Garrett Wiggans said as the Lady Crusaders prepared for tonight’s season opener against Blair Oaks in Wardsville. “If you go around to any high school or any athlete, you’re going to hear Final Four or a state championship as their ultimate goal.

“We were close to winning it, now it’s an expectation and I’d rather it be that than pressure.”

Helias returns four starters and a lot of reserves from a team that finished third in the state tournament.

“We are blessed to have a lot of experience from our starters,” Wiggans said. “The girls on the bench were along for the ride as well.”

Even with that experience, Helias has just one senior on its roster in 5-foot-6 guard Mikah Edwards. She will be starting at point guard for the third straight year.

“Each year, she’s gotten better and better in the point-guard role,” Wiggans said. “At the pace we want to play, she has to lead us. She’s a high-energy kid.”

Edwards averaged 7.3 points, 4.2 rebounds and 2.5 assists as a junior on her way to first-team all-district and second-team all-Central Missouri Activities Conference honors.

“She wants to play a high level of basketball,” Wiggans said.

Koelling, a 6-1 forward who is receiving Division I offers, was an all-state selection after averaging 13.8 and 6.8 rebounds for the Lady Crusaders.

“Being able to score and rebound and play defense, she is strong in all aspects of the game,” Wiggans said. “She feels the expectations of being a Division I prospect, but she’s dealing with those very well.”

Morris, a 5-10 forward, literally jumped onto the scene last season. She pulled down 222 rebounds for the Lady Crusaders.

“Ava knows she’s not going to get score a lot of points many nights, but she can grab a lot of rebounds and that’s big for any team,” Wiggans said.

“She keeps possessions alive for us,” Wiggans said.

Galbraith, a 5-8 guard, does a little bit of everything for the Lady Crusaders.

“She drives to the hoop, she can shoot the outside shot, she can dish it,” Wiggans said. “But I think one part of her game that can get overlooked is her defense.”

Kenadi Harrison, a 5-5 sophomore who was one of the first players off the bench last season, will round out Helias’ starters.

“She’s worked hard at improving her game and she’s going to be a huge piece for us,” Wiggans said.

The first players coming off the bench this season figure to be sophomores Maddy Larkin, Alaina Meyer and Lauren Verslues.

“They know what their roles will be to help us win,” Wiggans said. “They are high-energy players, every single one of those girls were essential parts of us making it to the Final Four.”

Abby Verslues, another sophomore, will miss the first six weeks of the season after having surgery. Lela Mueller and Lydia Moellers, both sophomores, also figure to see time on the varsity.

Wiggans believes the Lady Crusaders won’t be intimidated by moving up one classification.

“We have experienced Class 5 before two years ago,” Wiggans said. “I like the fact if you win district, you only have to win one game to get to the Final Four versus having to win a sectional and a quarterfinal.

“But we are going to have to beat some good teams if we want to win.”

With that in mind, the Lady Crusaders have boosted the strength of their schedule.

“We need to play good competition, the regular season is the building block for the postseason,” Wiggans said. “We have to approach every game with the idea of getting better.”

After tonight’s opener, Helias will play next week at the Fatima Comet Classic. The other tournament on Helias’ schedule is the Holiday Hoops Tournament, scheduled for Dec. 27-29 at Capital City High School.

The Lady Crusaders do not have a home game until Jan. 5, when they will take on Sedalia Smith-Cotton.