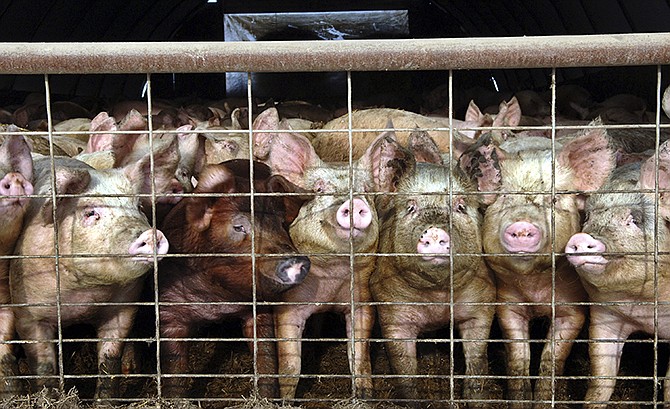 In this 2005 photo, a group of young pigs stare out of a pen at a hog farm in central North Dakota.

The Environmental Protection Agency is charged with protecting important waterways from pollution, but manure from concentrated animal feeding operations, or CAFOs, continues to harm waterways -- and only one-third of the largest facilities have a federal permit.

EPA permits require CAFO operators to tell the agency how much waste the animals will produce and how the manure will be disposed of.

States are largely responsible for issuing these permits, but that has resulted in patchy oversight, despite CAFOs being known environmental dangers.

In some states with hundreds of large CAFOs, including Indiana, Idaho and Arkansas, zero facilities have a federal permit.

A single CAFO can produce millions of gallons of manure per year. When the waste enters waterways, the nitrogen and phosphorus present in the manure can make water dangerous to drink and produce harmful algae blooms.

The Clean Water Act of 1972 mandated the EPA to protect "waters of the U.S.," a much-debated term that currently includes interstate rivers and wetlands and the smaller bodies of water that flow into or otherwise impact those interstate waters.

The EPA's solution to protect waterways from CAFOs and other potential polluters is the National Pollutant Discharge Elimination System (NPDES). The agency requires NPDES permits for facilities that plan on discharging waste to federally regulated waterways.

These permits cover about 30 percent of the country's 21,000 large CAFOs. (Smaller CAFOs that discharge directly to waters of the U.S. also may be required to obtain NPDES permits, but those facilities are not counted in the EPA's annual NPDES implementation reports.)

NPDES permits require CAFO operators to submit information to the EPA, including:

• the topography of the CAFO site;

• the exact locations of production areas and manure storage facilities;

• details of the construction of the confinements, the number and type of animals;

• an estimate of the amount of manure produced;

• plans detailing how manure will be disposed.

Some environmental activists say the NPDES program doesn't capture enough CAFOs, arguing that all CAFOs -- even smaller ones -- pose a risk to the environment.

"There's just been a 'catch me if you can' system, where if a CAFO says, 'I don't discharge,' they basically don't have to seek a permit unless the state regulating agency says they do and sets a higher standard than EPA," said Tarah Heinzen, legal director at Food and Water Watch, a nonprofit environmental group seeking changes to the EPA's regulation of CAFOs.

In response to questions about why the rate of CAFOs with NPDES permits varies so widely from state to state, the EPA stated the majority states are responsible for issuing permits.

"CAFOs that discharge into waters of the U.S. are required to obtain a NPDES permit from the respective permitting authority," a spokesperson for the EPA said. "In general, EPA does not have site-specific information for unpermitted CAFOs."

The percentage of CAFOs with an NPDES permit varies widely from state to state.

The EPA rarely issues permits at the federal level, instead authorizing state environmental agencies to implement the NPDES program.

The EPA has authorized states to enforce other initiatives, like the Resource Conservation and Recovery Act. Delegating authority to states "ensures national consistency and minimum standards while providing flexibility to states in implementing rules," the agency states on its webpage for the RCRA. Other federal agencies also delegate programs to states for this same purpose.

All state agencies must follow the EPA's basic standards for issuing NPDES permits. However, some states go beyond the federal agency's guidelines, issuing more permits than required.

Oregon's state law, for example, allows the state environmental agency to require any enclosed animal operation to apply for an NPDES permit, regardless of the number of animals present. As a result, there are more NPDES permits issued in Oregon than there are CAFOs.

NPDES also isn't the only oversight of CAFOs. Each state has its own permitting requirements beyond the federal program, often requiring many of the same documents as the NPDES permit.

In Minnesota, CAFOs can choose between obtaining a state permit or an NPDES permit, though the NPDES permit is required for those that directly discharge to a qualifying body of water. Both permits require plans to prevent manure from harming the environment and maps describing the facilities.

The rules and regulations -- including what qualifies as a CAFO -- differ across state lines, and information on CAFOs isn't centralized, making large-scale analysis of CAFOs and their impact on the environment difficult.

Iowa has more CAFOs than any other state -- nearly 4,000 -- but only 4 percent have NPDES permits.

The EPA standard is "both the floor and the ceiling" in Iowa, Heinzen said.

Iowa law bars the state department in charge of issuing the permits -- the Iowa Department of Natural Resources -- from issuing permits outside of the bare minimum required by the EPA.

"In Iowa, ag is king -- corporate ag in particular, " said Lisa Whelan, deputy director of Iowa Citizens for Community Improvement. "There's a lot of political donations ... the industry has a lot of power and it's reflected in our laws."

The Iowa DNR has come under fire before for lax enforcement of CAFO regulations. In 2007, environmental groups including Iowa Citizens for Community Improvement petitioned the EPA to take away the Iowa DNR's authority to issue NPDES permits on behalf of the federal government.

In response, the EPA launched an investigation into the Iowa DNR. In a report released five years after the initial petition, the agency found several issues with the Iowa DNR's administration of CAFO permits, including that the state agency did not have a sufficient program to determine whether unpermitted CAFOs needed NPDES permits.

The Iowa DNR also was failing to respond to violations of the Clean Water Act in a timely manner, the EPA said.

In 2013, the Iowa DNR and the EPA agreed on steps the Iowa DNR would take to improve its CAFO permitting program.

Each year, the Iowa DNR reported its progress on those steps to the EPA, including asking the state's Environmental Protection Commission to fully adopt the federal NPDES rules and adjust its permits to be in compliance with the federal rules. Notably, this plan also forced the Iowa DNR to track down unpermitted livestock operations and determine what regulation those facilities required.

The Iowa DNR located more than 5,000 potential animal feeding operations that required further investigation by the agency. At the time of the final report in 2018, only eight of those sites were found to be large CAFOs, and the Iowa DNR determined that those facilities didn't discharge.

This process allowed the agency to keep its authority over the NPDES program.

But some groups, including ICCI, haven't seen the results they wanted, including designating more CAFOs as "point source" polluters -- those directly discharging to waterways, Whelan said.

The Iowa DNR did not respond to questions about its administration of the NPDES program.

One reason for the low rate of NPDES permitting across the country is that CAFOs often don't directly discharge waste into waterways. Instead, pollution more often occurs when rain causes manure lagoons to spill over into waterways, or washes manure off of crop fields where it had been used as fertilizer.

The Clean Water Act specifies CAFOs are point sources. However, in the same paragraph, the act includes an exemption for "agricultural stormwater."

Instead of treating every CAFO like a point source, the agency instead has used the "agricultural stormwater" clause to exempt many CAFOs from NPDES permitting.

"This is an area where EPA has made a big mess of things with a very convoluted approach to its rules," Heinzen said.

In 2003, the EPA implemented a "duty to apply," meaning that all large CAFO operators had to apply for an NPDES permit. But a federal court struck down that rule two years later, preventing the EPA from enforcing universal permitting in the future.

Food and Water Watch also is using the courts to push for closer monitoring of CAFO discharges by challenging Idaho's general CAFO permit, which "lacked monitoring" to ensure permitted facilities were following the rules, Whelan said.

"For us, the whole thing is about accountability and it's about the transparency connected with the permit," Whelan said. "That's one of the things that people want -- they want a level playing field."

Investigate Midwest is an independent, nonprofit newsroom. Its mission is to serve the public interest by exposing dangerous and costly practices of influential agricultural corporations and institutions through in-depth and data-driven investigative journalism. Visit www.investigatemidwest.org.