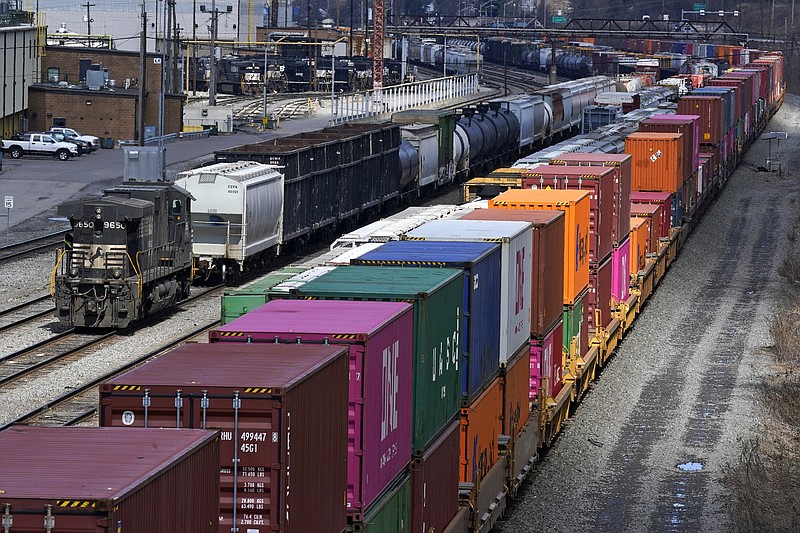 FILE - This April 2, 2021, file photo shows freight train cars and containers at Norfolk Southern Railroad's Conway Yard in Conway, Pa. Railroad engineers accepted their deal with the railroads that will deliver 24% raises but conductors rejected the contract casting more doubt on whether the industry will be able to resolve the labor dispute before next month’s deadline without Congress’ help. The votes, Monday, Nov. 21, 2022, by the two biggest railroad unions follows the decision by three other unions to reject their deals with the railroads that the Biden administration helped broker before the original strike deadline in September. (AP Photo/Gene J. Puskar, File)

OMAHA, Neb. (AP) -- Consumers could see higher gas prices and shortages of some of their favorite groceries during the winter holiday season if railroads and all of their unions can't agree on new contracts by an early-December deadline that had already been pushed back.

The likelihood of a strike that would paralyze the nation's rail traffic grew Monday when the largest of the 12 rail unions, which represents mostly conductors, rejected management's latest offering that included 24 percent raises and $5,000 in bonuses. With four of the 12 unions that represent half of the 115,000 rail workers holding out for a better deal, it might fall to Congress to impose one to protect the U.S. economy.

The Retail Industry Leaders Association said a rail strike "would cause enormous disruption" although retail stores are well stocked for the crucial holiday shopping season. It's not clear what a strike would mean for packages because FedEx and UPS, which both rely on rail to some degree, haven't commented in detail.

"Fortunately, this year's holiday gifts have already landed on store shelves. But an interruption to rail transportation does pose a significant challenge to getting items like perishable food products and e-commerce shipments delivered on time, and it will undoubtedly add to the inflationary pressures already hitting the U.S. economy," said Jess Dankert with the group that represents more than 200 major retailers.

There's no immediate threat of a strike even though four unions have rejected deals the Biden administration helped broker before the original strike deadline in September. Those unions agreed to try to hash out a contract before a new Dec. 5 strike deadline. But those talks have deadlocked because the railroads refuse to add paid sick time to what they've already offered.