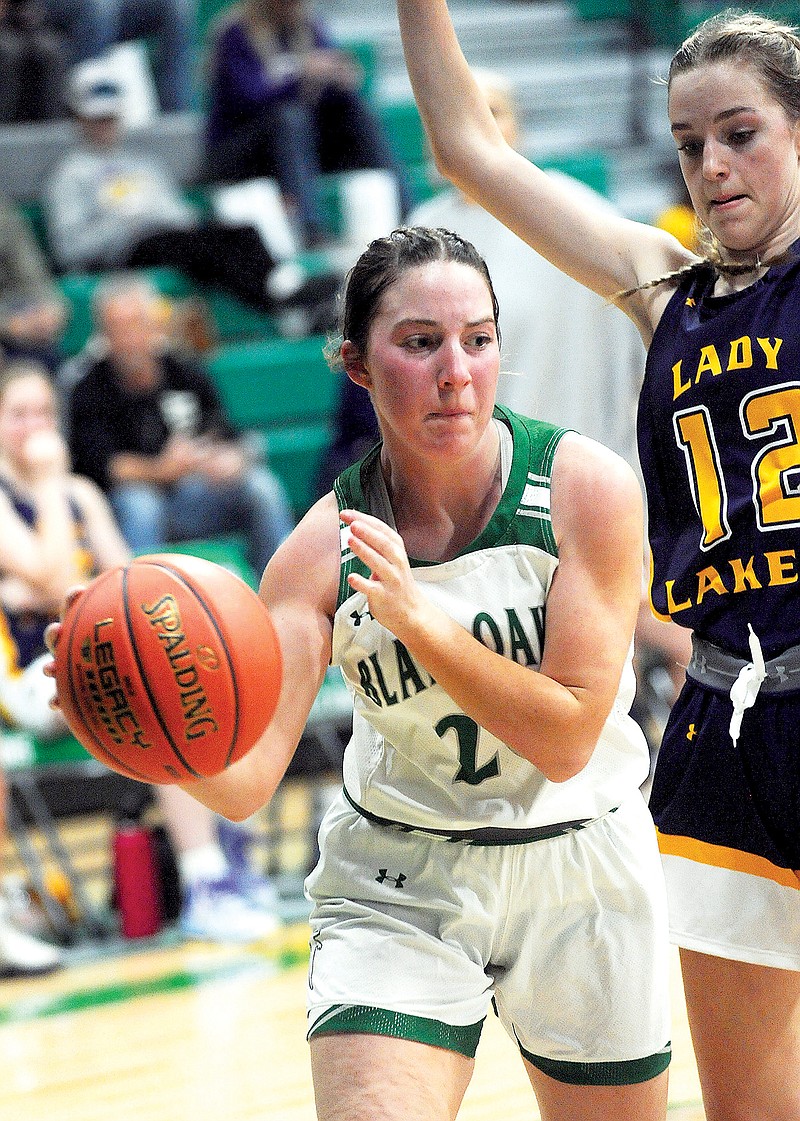 WARDSVILLE -- The Blair Oaks Lady Falcons decided the best way to win a tightly contested game was to never give up hold of the lead.

Blair Oaks led for the final 20 minutes Monday, and although the Camdenton Lakers cut a 12-point deficit in the fourth quarter down to three points, the Lady Falcons held on for a 46-39 victory in their season opener.

“I was really proud of the girls, we had a lot of adversity in that game,” Blair Oaks coach Brandon Moore said. “We’re a young team and we’ve got some girls that are stepping up into new roles.”

Blair Oaks trailed 12-6 after one quarter. The Lady Falcons used an 11-0 run in the second quarter to take the lead for good.

“What we talked about (between quarters) is you have to trust each other,” Moore said. “You have to beat them with a pass, you can’t just attack off the first or second pass.”

Chesney Luebbering started the run for Blair Oaks with a 3-pointer from the top of the key, making the score 13-9.

“That got her going, and it looked like she was in rhythm for the rest of the game,” Moore said. “

Baley Rackers made 1-of-2 free throws, then drained a 3 from the right wing to tie the score at 13 with 4:33 left in the second quarter.

Emma Wolken grabbed a loose ball on the Lady Falcons’ next possession and scored a layup. She added a pair of free throws to push the Blair Oaks lead to 17-13 with 3:00 left in the first half.

Camdenton went more than 14 minutes without a field goal from the 2:24 mark of the first quarter to the 3:50 mark of the third quarter.

From the start of the second quarter to the midway point of the third quarter, Camdenton missed 11 consecutive shots and committed 15 turnovers.

“Defensively, the whole game, we were solid,” Moore said, as the Lady Falcons held the Lakers to 26 percent shooting (11-of-43) and forced 25 turnovers. “We cut down on dribble penetration and we got some deflections, got some steals. Turnovers led to points for us.”

Blair Oaks led 19-16 at halftime and pushed its lead to 34-24 by the end of the third quarter. But with a short bench, foul trouble caught up to the Lady Falcons in the second half.

Autumn Bax, Rackers and Belle Boessen each had three fouls by the 5:30 mark of the third quarter. Bax and Rackers picked up their fourth fouls late in the quarter and did not return until less than five minutes remained in the fourth quarter.

“That was hard to juggle, but I thought they handled it well,” Moore said.

Boessen scored a basket off a loose ball early in the fourth quarter, giving the Lady Falcons their largest lead of the game at 36-24.

Then Jacee Peterson and Oakleigh Hill went to work for Camdenton.

Peterson scored six straight points and Hill followed with four consecutive free throws to cut the Blair Oaks lead to 39-34 with 4:45 to play. Hill knocked down a 14-footer and Peterson scored inside to make it a one-possession game at 41-38.

“Those two led the charge,” Moore said. “Peterson is a really good player, very strong inside.”

The Lakers had opportunities to tie the score, but Hill’s first 3-point attempt was off the mark and her second attempt was blocked out of bounds by Bax with 1:38 to play.

“When you get into those situations in crunch time, with a minute or two minutes left on the clock, you get a little tight and a little nervous,” Moore said. “The girls didn’t know any different, they just kept playing hard.”

Blair Oaks missed the front end of back-to-back 1-and-1s late in the fourth quarter, but the Lady Falcons finished the game by making 5-of-6 free throws -- three from Bax and two from Wolken.

“Sometimes there’s a little more pressure on a 1-and-1,” Moore said, “because you think, ‘Man, if I don’t make this one, then I can’t shoot the second one.’ Just go up there and knock it down, don’t worry about the second free throw.”

It was a balanced effort from Blair Oaks, as Wolken scored a team-high 14 pints and Luebbering added 10 points. Wolken, Bax and Taylor Groner each grabbed seven rebounds.

“Everybody played their part,” Moore said.

Blair Oaks (1-0) turns around and hosts Helias tonight. The two-quarter JV game starts at 6 p.m., followed by the varsity contest.

“Every game is a measuring stick for us,” Moore said. “Win or lose tomorrow night, we’re going to find out something about ourselves.”