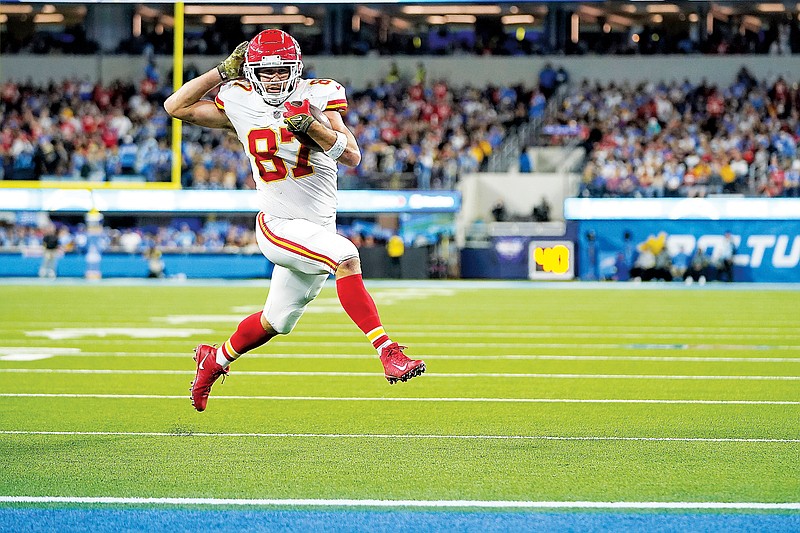 Chiefs tight end Travis Kelce runs in for a touchdown during the first half of Sunday night’s game against the Chargers in Inglewood, Calif. (Associated Press)

INGLEWOOD, Calif. -- Patrick Mahomes and Travis Kelce ended up putting on a performance that made The Fonz proud.

Mahomes connected with Kelce for three touchdowns Sunday night -- including the go-ahead score with 31 seconds remaining -- as the Kansas City Chiefs rallied past the Los Angeles Chargers 30-27 to stay atop the AFC.

Mahomes met Emmy Award-winning actor Henry Winkler before the game. Winkler, who played Fonzie for 12 seasons on the iconic television show “Happy Days”, received a signed jersey on the sideline. Kelce got in the act by wearing a T-shirt before the game that had a picture of The Fonz and said “Football. Family. Fonzie”.

When Mahomes and the Chiefs got the ball at the KC 25-yard line with 1:46 remaining, he had his usual cool and calm presence.

“When I went in the huddle, it was let’s just do it. Everyone had the mindset of take it one play at a time and get it when it counts,” said Mahomes, completed 20-of-34 passes for 329 yards.

After the Chargers had pulled ahead 27-23 on Justin Herbert’s 6-yard touchdown pass to Joshua Palmer with 1:46 left, Mahomes directed a six-play, 75-yard drive that took just 1:15.

It was the 11th time in the regular-season Mahomes had a game-winning drive in the fourth quarter.

Despite missing two receivers due to injuries, he completed 3-of-4 for 48 yards on the drive and scrambled twice for an additional 22.

The Chiefs also benefited from a third-down holding call on Chargers’ safety Derwin James after an incomplete pass.

After a 16-yard run by Mahomes and Kansas City timeout, Mahomes hit Kelce on a short crossing route Kelce took to the end zone for a 17-yard touchdown,

“We didn’t have our full arsenal of weapons. I was ready for the matchup,” said Kelce, who had six catches for 115 yards. “I knew they were going to play man-to-man and Patrick was going to look for me when it was 1-on-1. I was able to finish the game off on a positive note.”

Herbert and the Chargers had one final chance, but Nick Bolton intercepted a deflected pass to seal it for the Chiefs (8-2), who swept the season series from Los Angeles (5-5) and took a three-game lead in the AFC West.

It is the third straight year the Chargers have had a late lead at home against the Chiefs and were unable to finish.

“You should be frustrated. To not beat those guys is disappointing because we felt like our level was good enough to win, but we didn’t finish plays in that fourth quarter to get it done,” Chargers coach Brandon Staley said after Los Angeles lost its second straight to fall to 5-5.

With a one-game lead ahead of four teams in the conference, Kansas City is in position to claim home-field advantage throughout the playoffs.

Kelce scored at least three touchdowns for the second time in his career. He scored four in a Monday night win Oct. 10 against the Raiders.

“Patrick and Travis calm everything down on both sides of the ball. The good players really stepped up when we needed it,” Chiefs coach Andy Reid said. “I’m proud of our guys for stepping up offensively and defensively. That’s big-time football at the right time.

Herbert went 23-of-30 for 280 yards and two touchdowns, both to Palmer, who had eight receptions for 106 yards. It was easily the Chargers’ best offensive performance in nearly a month as the unit was bolstered by the return of receivers Keenan Allen and Mike Williams.

Allen, playing only his third game due to a nagging hamstring injury, had five receptions for 94 yards, including a 46-yard catch up the right sideline on the go-ahead drive to put the ball on the Chiefs 16-yard line.

“Mike (Williams) is about as tough as it gets, and Keenan (Allen), too. They’re special competitors, so any time that you get those guys out on the field, something good is going to happen. But, unfortunately, it didn’t go our way today,” Herbert said.

It was Kelce’s 34th game with at least 100 yards receiving, surpassing Rob Gronkowski for the most by a tight end in NFL history. Eight of his 11 TDs this season have come in prime-time games.

Kelce gave Kansas City a 13-10 lead early in the second quarter on a 4-yard screen pass where he imitated Pro Football Hall of Fame cornerback Deion Sanders’ high-skipping dance on his way to the end zone.

Kelce’s 32-yard touchdown on the opening play of the fourth quarter put the Chiefs on top 23-20. Kelce caught the ball at the L.A. 26 after Asante Samuel Jr. made a diving attempt, broke a tackle by Nasir Adderley at the 16 and went up the right sideline for the score.

After Harrison Butker’s 33-yard field goal on the opening possession gave the Chiefs a 3-0 lead, the Charges promptly answered on their first drive in three plays. Palmer beat Juan Thornhill in single coverage and Herbert found him for a 50-yard touchdown.

It was the first time in 20 regular-season games that Kansas City had allowed a touchdown on an opening drive.

Notes: Chiefs RB Clyde Edwards-Helaire suffered an ankle injury in the first quarter, Thornhill had a calf injury in the second quarter and WR Kadarius Toney strained a hamstring in the third quarter. None returned to the game. … Williams’ return for the Chargers was short-lived. He reinjured his ankle after a 15-yard reception in the first quarter. … LB Kenneth Murray came out in the third quarter with a neck injury. … S Nasir Adderley had a thumb injury in the fourth quarter. … Next Sunday, the Chiefs host the Los Angeles Rams and the Chargers play at the Arizona Cardinals.