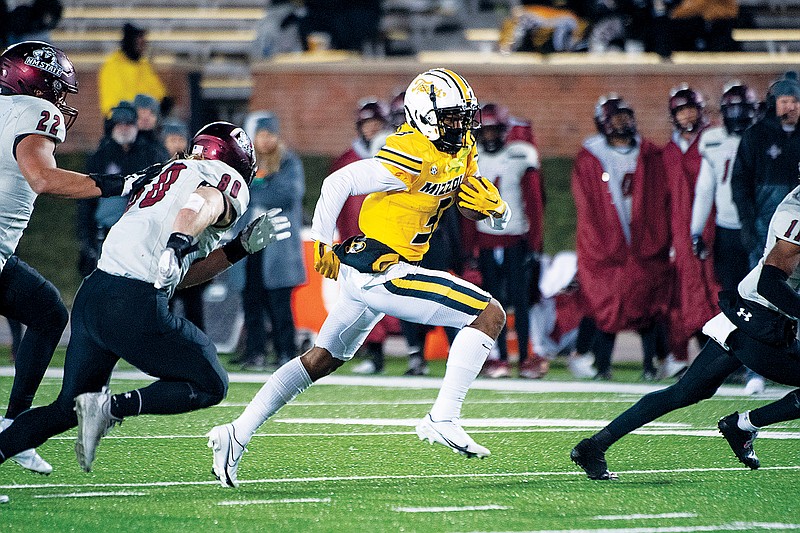 COLUMBIA -- Missouri did what it needed to do Saturday night.

Coming in with a 4-6 overall record, the Tigers had to rebound from a tough loss to keep their bowl hopes alive. They did exactly that, scoring on six of their first seven drives to build a 45-14 win against the New Mexico State Aggies at Faurot Field.

“You look at college football today, a lot of games that didn’t go exactly the way everybody thought or expected,” Missouri coach Eli Drinkwitz said. “People played down or didn’t play as well as they possibly could have. The challenge for our team and our seniors was to play to our standard.”

The game was highlighted by strong offensive performances from a number of players. Brady Cook completed 19-of-27 passes for 251 yards and three touchdowns to go with seven carries for 71 yards to lead the Tigers’ rushing game.

Seniors Barrett Banister and Cody Schrader celebrated Senior Night in style. Banister had a career-high 91 yards on seven catches, while Schrader went above 100 total yards with 70 rushing yards on 18 carries and another 47 receiving yards on four catches.

“Cody is the same guy every day,” Drinkwitz said. “He runs really hard, he protects the football, he protects the quarterback. He had two catches for third-down conversions. … He’s Mr. Consistent, it’s why he’s such a good player.”

With the big win never in doubt, the Tigers were able to get looks at many younger players who haven’t spent much time on the field this year.

Freshman quarterback Sam Horn got one series in the fourth quarter, but his only completed pass was called back for a penalty. He rushed for 10 yards.

“I didn’t expect that play to score,” Cook said. “He turned on the jets, that was impressive.”

“That felt great, being a kid from Missouri, I grew up dreaming of doing something like that,” Hoerstkamp said. “I didn’t come in tonight expecting that, just trying to get a win. When I saw the play, I thought the play was dead or something. I thought, ‘No way there’s this much space.’ Sure enough there was. I heard someone say, ‘Go score,’ and I thought, ‘Say less, I’ll go ahead and do that.’”

Freshman running back Tavorus Jones had a 32-yard catch to go with four carries for 12 yards.

“I think it’s a real opportunity for them to develop and see what playing in a college football environment is like, see how fast the game moves,” Drinkwitz said. “… I thought some of those guys handled it really well and I thought some of them didn’t to be honest. Some of the guys out there probably didn’t take advantage of the opportunity the way they needed to.”

Luther Burden and Schrader both scored two touchdowns to reach seven offensive this year. Schrader has scored all seven on the ground, while Burden has three rushing and four receiving.

Burden started Missouri’s scoring when he ended the Tigers’ first drive with a 12-yard screen pass, hurdling over a defender and blocker locked up and falling at the goal line.

His second touchdown came near the end of the third quarter when he caught a pass on a jet sweep to the left, cut upfield and went untouched for a 14-yard score. Because of where Burden collected his three passes, though he only had 35 yards through the air, he had 42 yards after the catch.

“The main goal this week was to get the seniors their rock,” Burden said. “I had two seniors in my room with Barrett and Tauskie Dove, it was real important to get those guys the rock.”

Schrader got his first score on a 1-yard run to end a 17-play drive that took more than 6:30 off the clock in the first half. He scored again on a 5-yard run on the opening drive of the third quarter.

Missouri’s other touchdown came on the defensive end early in the fourth quarter when redshirt freshman Daylan Carnell jumped a route at the 40, intercepted a pass and picked up a block at the goal line for a pick-6. Jalani Williams then ended the Aggies’ next drive with a leaping interception to give the Tigers two turnovers.

“I thought Jalani Williams did a great job after Joseph (Charleston) went out,” Drinkwitz said. “He played pretty much the rest of the game and had a big turnover. Daylan Carnell also did a nice job.”

Harrison Mevis was 6-of-6 on extra points and added a 43-yard field goal to finish Horn’s lone drive.

Missouri (5-6, 2-5 Southeastern Conference) will play its regular-season finale at 2:30 p.m. Friday as it hosts Arkansas in the Border Line game.

New Mexico State (4-6) will play its scheduled final at Liberty at 11 a.m. Saturday, but might reschedule a game against San Jose State that was postponed on Oct. 22.