Boston rallies No. 1 South Carolina past No. 2 Stanford 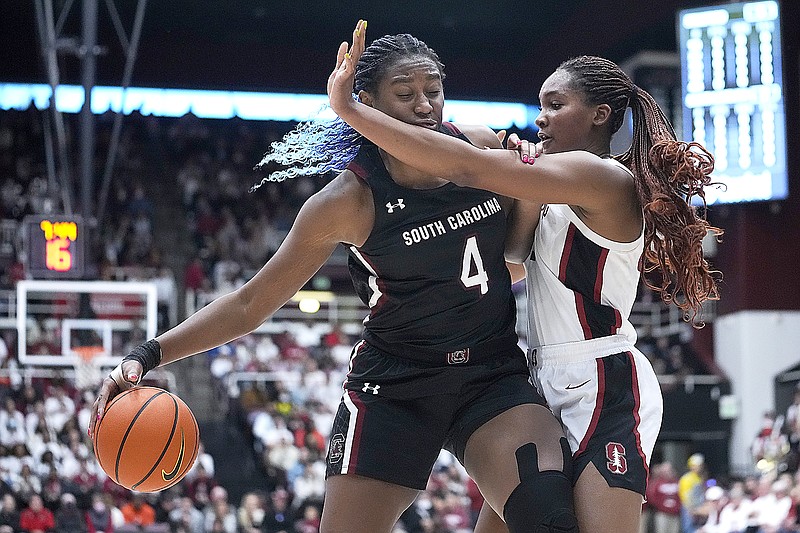 South Carolina forward Aliyah Boston (left) drives to the basket while defended by Stanford forward Kiki Iriafen during the first half of Sunday's game in Stanford, Calif. (Associated Press)

STANFORD, Calif. -- Dawn Staley pulled her South Carolina women close into the huddle and asked them to fight.

Aliyah Boston heard that one-word request and took charge when it mattered most, delivering as she has day after day during a decorated career.

Boston overcame early foul trouble to score 14, including the tying jumper with two seconds left in regulation, Bree Hall hit a 3-pointer with 42 seconds left in overtime, and No. 1 and defending champion South Carolina rallied past second-ranked Stanford for a 76-71 win Sunday in a dramatic early-season showdown.

South Carolina’s Victaria Saxton missed both free throws with 24.3 seconds left but a jump ball moments later gave possession to the Gamecocks (4-0). Stanford got a chance with 10 seconds left after Agnes Emma-Nnopu’s steal but Haley Jones couldn’t get the ball in-bounds before a 5-second violation.

Stanford (5-1) then blew another opportunity, receiving a technical with 3.4 seconds left after Kiki Irifen called a timeout in the backcourt it didn’t have.

VanDerveer’s Stanford team led most of the afternoon but couldn’t deliver the winningest women’s basketball coach and Hall of Famer her 1,163rd career victory.

Cameron Brink scored Stanford’s first four points in overtime and finished with 25 points, five rebounds and four blocked shots. But she fouled out trying to swat a shot with three minutes remaining.

South Carolina’s Brea Beal made a 3-pointer with 14 seconds left in the fourth. Jones then missed the first of two throws with 12.5 seconds remaining. After that, South Carolina had one more chance -- which Boston ran with to force overtime.

VanDerveer and Staley wore long-sleeve white T-shirts featuring Brittney Griner’s name and image in support of the WNBA star who is incarcerated in Russia.

Ashten Prechtel came off the bench to block five shots and grab seven rebounds as Stanford saw its 17-game home winning streak end at Maples Pavilion, which held a standing-room-only sellout crowd of 7,233 for the nationally televised matinee.

“This is what women’s basketball is about, has been about, and now is the time that the product we’re putting on the floor should be seen by as many eyes as possible,” Staley said.

Zia Cooke’s layup with 7:54 to go in the fourth got the Gamecocks within 54-50, then neither team scored for nearly the next four minutes. Both missed high-percentage opportunities while facing stingy defense.

Brink made five of her first seven shots and had 12 points after the first quarter.

“There’s a lot we left out there on the court,” Jones said. “But also in the grand scheme of things it’s November, it’s our first loss so I think there’s a lot left on the table.”

The teams met in December last year in Columbia, S.C., with the same rankings. South Carolina rallied from 18 back to win that one. The higher-ranked team has won the last nine matchups in the series.

The Cardinal triumphed in both previous meetings on their home floor.

Stanford beat South Carolina 56-55 in the 2021 national semifinal before edging Arizona 54-53 for the program’s first title since 1992.

In November 2010 -- 12 years ago this coming week and early in Staley’s coaching career at South Carolina -- she brought VanDerveer to the visiting locker room for a pep talk with the Gamecocks after Stanford’s 70-32 rout.

This time, it was Staley addressing the Stanford team and its supporters who stuck around well after the game.

“If you have an insatiable desire to learn like I do as a student of the game, it’s going to take getting your head knocked off a few times, then you adjust,” Staley said.