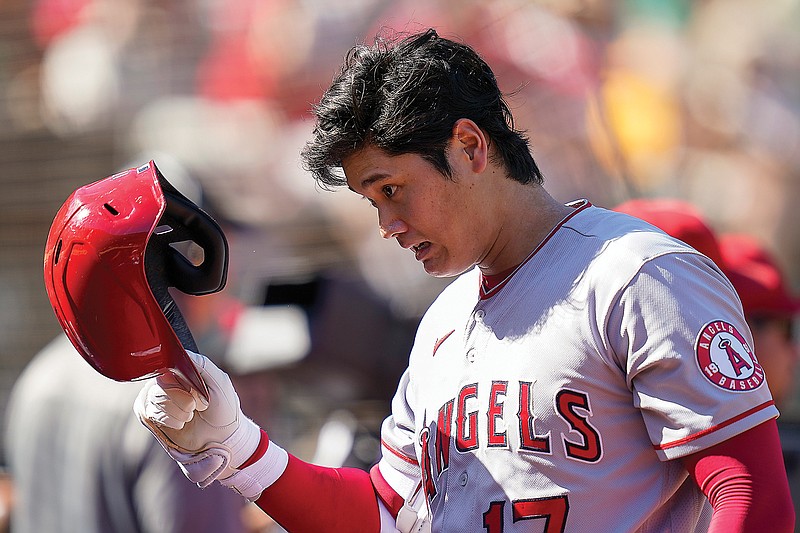 In this Oct. 5 file photo, Shohei Ohtani walks to the Angels' dugout during a game against the Athletics in Oakland, Calif. (Associated Press)

It was awards week for Major League Baseball, and there weren’t too many surprises.

First to be announced Monday, the Seattle Mariners’ Julio Rodriguez nearly swept the American League Rookie of the Year with 29-of-30 first place votes (the Royals’ Bobby Witt Jr. took fourth with a second-place vote and four third-place votes). The Orioles’ Adley Rutschman took second after an astounding season post late call-up. If Rutschman had played the full season, not only would he likely have been in higher consideration, but the Orioles might have made the playoffs, since they had the best record in the A.L. East after his call-up May 22.

Atlanta Braves’ outfielder Michael Harris II beat teammate Spencer Strider for the National League Rookie of the Year, both were great candidates and either winning would have been reasonable. St. Louis’ Brendan Donovan took third with 22 third-place votes.

Tuesday we learned the Cleveland Guardians’ Terry Francona and the New York Mets’ Buck Showalter won managers of the year. Francona helped propel a Cleveland team that was expected to end near the bottom of the A.L. Central to a top spot in the division, while Showalter took what was expected to be a top-of-the-line Mets team to more than 100 wins. Neither were unexpected.

Wednesday’s Cy Young awards were completely uncontested, with both being unanimous votes for just the second time in MLB history (the only other time was 1968 when Detroit’s Denny McLain and St. Louis’ Bob Gibson both swept). The Miami Marlins’ Sandy Alcantara and the Houston Astros’ Justin Verlander were both dominant through the season, with Verlander collecting his third Cy Young in his Hall of Fame career.

None of those awards really merited all the much discussion or debate through the end of the season. It was pretty clear who the deserving winners were, but Thursday was different.

Thursday, the Most Valuable Player awards were given out.

First up, the Cardinals’ Paul Goldschmidt won the 18th MVP in Cardinals’ history, giving them the most in the National League, and the total is second only to the New York Yankees’ 21.

The race was close all year, but Goldschmidt seemed to be the leader throughout, holding the Triple Crown lead for much of the last couple of months before placing third in batting average (.317), fifth in home runs (35), and second in RBI (115).

But while there was some intrigue in the National League, there was a significant amount in the American League.

The Yankees’ Aaron Judge had one of the best offensive seasons ever, totaling 62 home runs with a .311 batting average and 131 RBI for first, second and first, respectively, in the A.L. He single-handily carried the Yankees to the playoffs as they crashed through the second half of the season, he got on base .425 percent of the time and compiled 10.6 WAR.

A no-brainer, right? Especially since he ended up with 28 first-place votes.

But, while Judge had one of the best offensive seasons ever, the Los Angeles Angels Shohei Ohtani had arguably the best overall season ever (only really up against Ohtani last year).

I think there’s already become some fatigue to Ohtani’s magic and MVP is a narrative award. I have a feeling this argument is going to happen basically every year for a while. As long as Ohtani is both a respectable hitter AND a respectable pitcher, he should automatically be the MVP.

There is no way to be more valuable for a team than for one player to be two players.

Thing is, he also had a 2.33 ERA in 166 innings pitched with 207 strikeouts and a 15-9 record. He was worth 6.1 pitching WAR, giving him 9.5 combined to get near Judge, take out the penalty that Ohtani gets for DHing when he’s not pitching and they’re basically equal.

I get it, Judge was incredible and held the narrative through the year as he chased Roger Maris’ (not the real) home run record (You can not respect Bonds all you want, but he hit 73 baseballs over the outfield fence in 2001. That’s a fact, it’s not up for debate). Ohtani played on a team that floundered through the second half and wasn’t close to the playoffs.

But we need to recognize what we’re seeing for what it is. Ohtani is one of the most impressive athletes we’ve seen in any sport. There’s a reason nobody has been this effective as both a hitter and a pitcher, not even Babe Ruth. Both of those things are incredible difficult and he’s not just respectable at both, but he’s a middle of the order hitter and an ace pitcher at the same time.

Any year he does both, he’s the MVP in my book, without question.