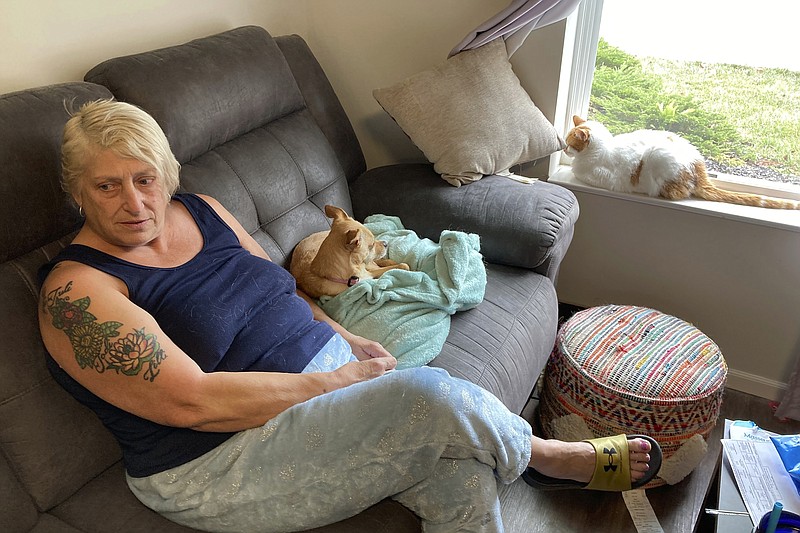 Janna Sharrett relaxes at home on a day off from her job as a full-time customer service rep for a contact lens and eyeglass company, on Tuesday, Nov. 1, 2022, in Grove City, Ohio. Sharrett earns $14.94 an hour but pays just $695 a month in rent thanks to the affordable housing apartment developed by a local nonprofit to expand the number of low-rent options in central Ohio. A shortage of housing of all kinds in the region is raising concerns as Intel Corp. develops a $20 billion project expected to add thousands of new residents. (AP Photo/Andrew Welsh-Huggins)

COLUMBUS, Ohio (AP) -- Intel's announcement earlier this year of a $20 billion manufacturing operation bringing thousands of jobs to rural Ohio was greeted as an economic boon.

But behind that enthusiasm lurked a pressing question.

"Where are we putting everybody?" asked Melissa Humbert-Washington, vice president of programs and services at Homes for Families, which helps low-wage workers find housing in a region already suffering a major shortage.

Intel says its initial two computer chip factories will employ 3,000 people when the operation is up and running in 2025. The project is also expected to employ 7,000 construction workers. And none of that includes the hundreds of additional jobs as Intel suppliers move in, along with the expected boom in the service sector.

Such housing challenges are playing out across the country as companies increasingly come under fire for failing to consider the shelter needs of their new employees or the impact big developments will have on already tight housing markets.

Experts agree that years of underbuilding dating to the Great Recession of 2008 has caused widespread housing shortages. Nationally, the country is short about 1 million homes, according to Rob Dietz, senior economist at the National Association of Home Builders. The National Apartment Association estimates a rental shortage of about 600,000 units.

"We have underbuilt housing by millions of homes over the past 15 years," said Dennis Shea, executive director of the J. Ronald Terwilliger Center for Housing Policy. "So when a big company comes into a community that is supply constrained, the demand that they're going to inject ... is going to affect home prices and rental prices because there's more demand than supply."

For a big company's impact on housing, look no farther than Intel's own operations in Chandler, Arizona, which grew from a small agricultural city of about 30,000 in 1980 when the company built its first factory to a high-tech metropolis of 220,000 today. That was accompanied by tremendous housing growth, and today Chandler is running out of developable land, with nearly 95 percent of the area built out with residential, office, industrial and retail projects, according to the Greater Phoenix Economic Council.

The challenge for areas like rural Ohio is that they don't have local employees to build or staff a large project, said Mark Stapp, director of the Center for Real Estate Theory and Practice at Arizona State University. There's neither the housing nor the infrastructure to accommodate the thousands of new arrivals, increasing housing prices and possibly forcing existing residents out.

"It's economic development. It's going to employ people. But you are probably going to have to bring a lot of people into the area," he said. And "those jobs require housing."

"If you don't recognize that and don't properly plan infrastructure, land use policies and manage that growth, it can be a big problem. The great opportunity turns into a big problem."

In central Ohio, the Intel site is rising on hundreds of acres of rural land once occupied by farm fields and modest homes where large business parks have also sprung up near major thoroughfares. The region has averaged about 8,200 building permits per year for both single-family and multi-unit buildings, even as job and population growth estimates predating the Intel project called for more than twice that, according to the Building Industry Association of Central Ohio.

"We're not building enough of anything," said the group's executive director Jon Melchi. Central Ohio, with about 2.4 million residents today, will grow to at least 3 million by 2050, the group said.

The central Ohio shortage includes the "missing middle" of workforce housing, or homes up to $250,000, said Tre' Giller, CEO and president of Metro Development, one of Ohio's largest apartment developers. A recent Zillow search showed only about 570 listings for homes $250,000 or less in the area.

The housing pressure is especially intense for low-wage workers. Central Ohio already has about 71,000 households considered "severely rent burdened" -- families spending more than half their income on housing, said the Coalition on Homelessness and Housing in Ohio. The region has only 34 affordable units available for every 100 low-rent households, it said.

The problem is even more severe in Licking County, home to the future Intel plants, where more than one in five renters are considered severely rent burdened.

Affordable housing is crucial for the low-wage workers who keep the economy running, from pre-school teachers to medical assistants, said COHIO executive director Amy Riegel. But housing also has to be viewed on a spectrum: Without enough higher-end properties to purchase, buyers will snap up rentals, which then shuts out workers of limited means.

"Housing is definitely an ecosystem," Riegel said. "If you add housing at one end, and don't take care of the other end, it has an impact and a ripple effect through the whole system."

On the Nov. 8 ballot, Columbus voters approved a $200 million bond issue aimed at increasing the city's affordable housing stock for homeowners earning less than $50,000 annually. "We simply do not have enough places for people to live," Mayor Andrew Ginther said in announcing the issue in July.

Janna Sharrett is grateful for her apartment in an affordable housing complex in suburban Columbus as the region braces for Intel's arrival and its real estate impact. The 60-year-old customer service rep works from home and earns just $14.94 an hour. Her rent on the one-bedroom apartment she shares with her dog, Bella, and cat, Daisy, is $695.

The $6.5 million, 28-unit building where Sharrett lives was developed by Homeport, a Columbus-based nonprofit that works to expand affordable housing. Sharrett moved in two years ago seeking relief from a $1,000 rent payment, and today isn't sure what she'd do without it.

She worries about the needs of people like herself as the region grows through projects such as Intel.

Across the country, a growing number of companies are responding to housing concerns by rolling out ambitious plans for thousands of units of new housing -- though efforts fall far short of actual needs.

In 2021, Amazon launched its $2 billion Housing Equity Fund to create over 8,000 affordable homes across three regions where it operates: the Puget Sound in Washington state; Arlington, Virginia, and Nashville, Tennessee.

In 2019, Apple said it would commit $2.5 billion toward easing California's housing crisis, one of a number of initiatives by high tech companies. This month Walt Disney World picked a developer to construct affordable housing on 80 acres of its land in Orange County, Florida.

Intel, too, looks forward to partnering with Ohio community leaders to prepare for the increased housing demand over the next few years, said Intel spokesperson Linda Qian, without providing details.

Experts say it's in Intel's best interest to contribute toward alleviating the region's housing shortage. Employers in greater Columbus already blame high worker turnover and reduced productivity on long commute times, according to a report by the Affordable Housing Alliance of Central Ohio.

"Without the housing product it can easily stifle the workforce needs of Intel and others," said Jamie Green, a Columbus-based planning consultant.

As the Intel project unfolds, it highlights the challenges ahead, said Leah Evans, president and CEO of Homeport, which developed Sharrett's affordable apartment complex.

"This just brought to light that for every one job you create, you've got a commute and you've got a housing unit" need, Evans said. "You have to be thinking about all those things." 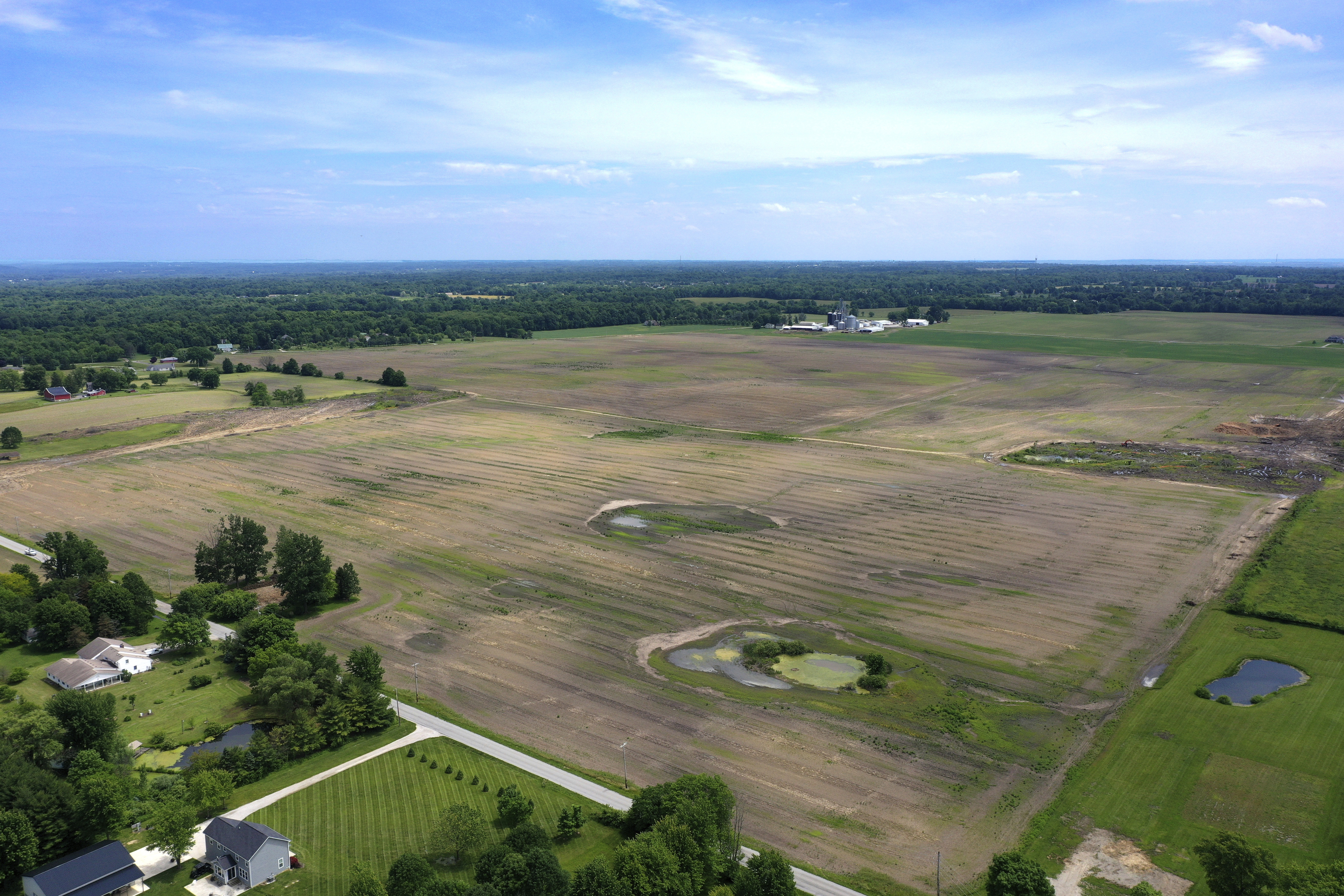 FILE - This aerial image taken with a drone on June 8, 2022, shows a portion of land in Johnstown, Ohio, where Intel plans to build two new processor factories. Intel’s announcement of the $20 billion manufacturing operation bringing thousands of jobs to central Ohio has been greeted as an economic boon. But it has also raised concerns about the impact on a region already suffering a housing shortage. (AP Photo/Gene J. Puskar, File) 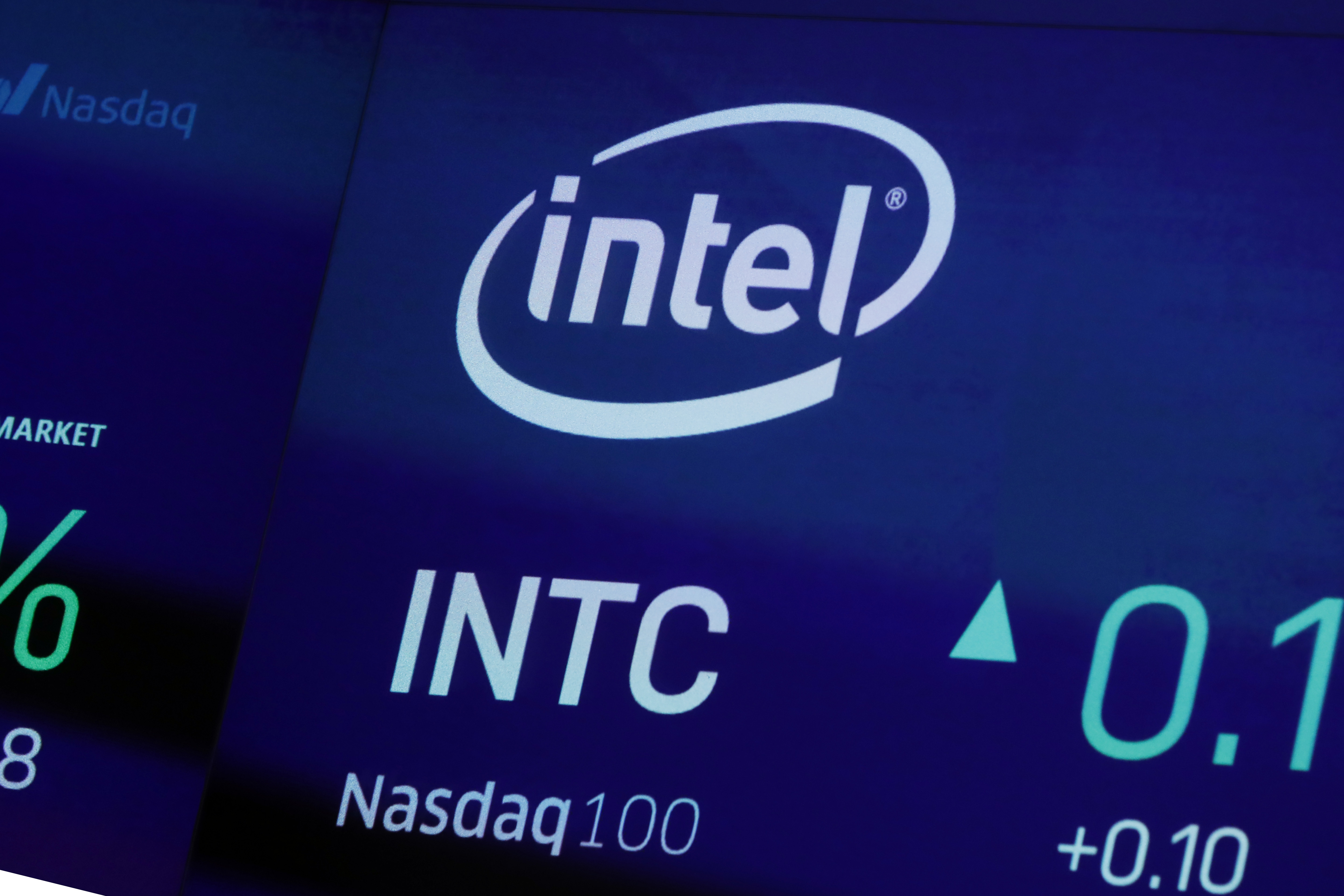 FILE - The symbol for Intel appears on a screen at the Nasdaq MarketSite in New York, Oct. 1, 2019. Intel’s announcement of the $20 billion manufacturing operation bringing thousands of jobs to central Ohio has been greeted as an economic boon. But it has also raised concerns about the impact on a region already suffering a housing shortage. (AP Photo/Richard Drew, File)