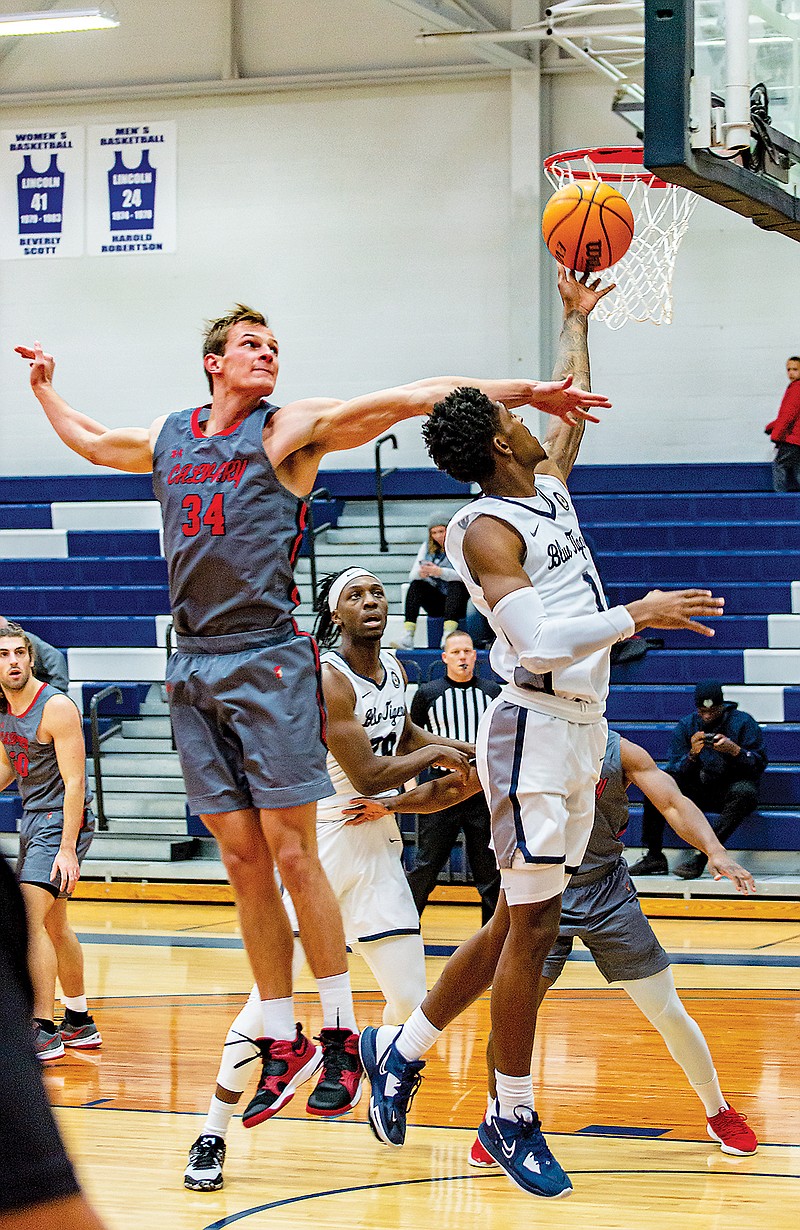 Artese Stapleton of Lincoln puts up a layup against the defense of Calvary’s Cedric Maxwell during Saturday afternoon’s game at Jason Gym. (Ken Barnes/News Tribune)

There are dominating victories and then there’s a whole different category the Lincoln Blue Tigers reached Saturday at Jason Gym.

The Blue Tigers shot 65 percent as a team and led wire-to-wire for a 128-36 victory against the Calvary Spartans to cap off the program’s first 3-0 start to a season since 2015-16.

“It’s always nice to learn when you win,” Lincoln coach Jimmy Drew said. “Part of learning how to win is just winning. Our guys did a good job of locking in for 40 minutes. That was a 40-minute game that we played well throughout. That was our challenge to them.”

Drew was looking for his team to start faster than the Blue Tigers had in the previous two games, and they definitely did that.

With a small tweak to the starting lineup -- Frank Yetna was inserted in the place of Caleb Wright -- Lincoln jumped out to a 13-2 lead just a little more than three minutes into the game against Calvary’s 1-3-1 zone on a pair of 3s by Emmette Page, a dunk by Kevin Kone, a corner 3 by Jamar Madge Jr. and a fastbreak bucket by Artese Stapleton.

“We made a lineup change and I think Frank came in and provided us defensive energy, provided us more of a presence on the defensive rebounding side of it,” Drew said. “I thought he was big lift for us.”

The second half was even more lopsided, as Lincoln shot 66 percent from the field and held the Spartans to 20 percent shooting after intermission. This formula led to the Blue Tigers outscoring Calvary 66-14 in the second half.

Despite the big advantage on the scoreboard the Blue Tigers energy level never wavered, as Lincoln had players diving on the floor and playing hard-nose defense the whole game.

“I love it, I love guys walking away with floor burns,” Drew said. “That teaches them a lot. We don’t play the score, we play to our standards and I think they did that for 40 minutes tonight. Our guys were diving for loose balls, taking charges in a game that got out of hand. That just shows that they are starting to buy in to playing to our standards instead of the scoreboard.”

Stapleton’s bid for a quadruple-double ended with about 11 minutes left after he intentionally fouled to allow Drew to sub out him and the rest of the starters to allow the deeper parts of the bench to get their chances.

“He was terrific,” Drew said. “He’s been good for us all the way through. He’s a guy that makes us go.”

The final 11-plus minutes belonged to the younger part of the Lincoln roster and allowed an opportunities for guys like freshman Tyvin Garrison to showcase his talents.

Garrison finished with 18 points on 6-of-8 shooting and grabbed five rebounds and two steals down the stretch.

“We really like our young guys, (Garrison) being one of them,” Drew said. “For him to come in and produce the way he has as a freshman, it’s impressive and it shows his future is so bright.”

Kone ended with 18 points and 15 rebounds on 9-for-11 shooting, Page added 16 and shot 6-for-7, Madge Jr. collected 14 points on 5-for-9 from the field and Arash Yaquibi posted a 4-for-5 shooting line while scoring 10 points as the other Blue Tigers to reach double-figures.

Lincoln (3-0) will now have a nine-day layoff until its next game, which is the MIAA opener Nov. 28 on the road against Pittsburg State (1-2).

The Blue Tigers will be relying on their players to make sure they stay fresh for the conference opener.

“You never like long breaks like this,” Drew said. “Certainly you like to stay in a rhythm, I think we are getting into a rhythm now. We have to be smart with it.”