Injuries at receiver a concern for both Chiefs, Chargers 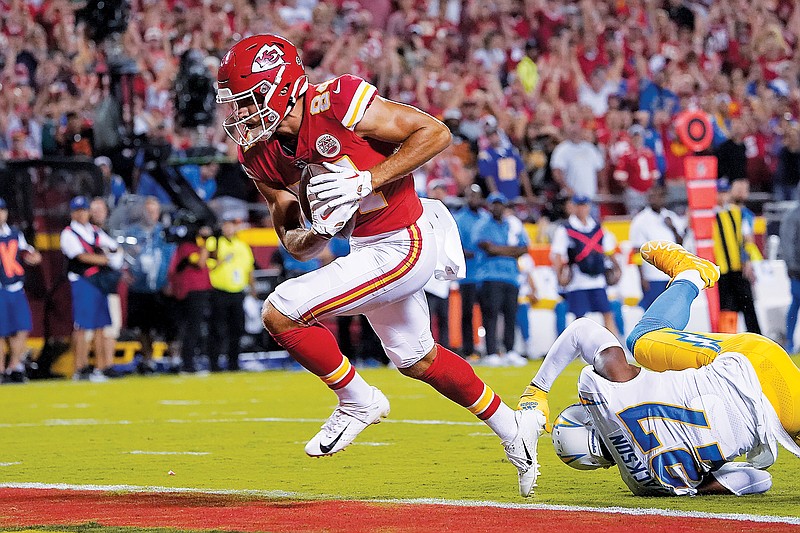 LOS ANGELES -- Fans usually expect a passing duel when Patrick Mahomes and the Kansas City Chiefs face Justin Herbert and the Los Angeles Chargers. That might not be the case tonight, with both teams unsure of who will line up at wide receiver.

The Chiefs (7-2) won’t have Mecole Hardman and likely will be missing JuJu Smith-Schuster for the prime-time showdown. Hardman was placed on injured reserve Thursday with an abdominal injury. Smith-Schuster remains in concussion protocol after taking a helmet-to-helmet hit in last week’s win against Jacksonville. Fellow receiver Marquez Valdes-Scantling has been dealing with an illness.

The Chargers (5-4) can empathize. Keenan Allen has played in only two games due to a nagging left hamstring strain, and Mike Williams was out the last two weeks with a high right ankle sprain. Allen and Williams returned to practice this week, but both have taken part only in individual drills and are questionable.

Smith-Schuster, Hardman and Valdes-Scantling have 97 of the Chiefs’ 245 receptions. If they can’t play, Kadarius Toney, Skyy Moore and Justin Watson can expect bigger roles.

Toney, acquired from the New York Giants on Oct. 30, had four receptions for 57 yards and a touchdown last Sunday against the Jaguars.

“We put guys in positions to succeed. And so for me, it’s about executing the offense, finding the open guy and getting the ball out of my hands, letting those guys make plays,” Mahomes said. “We’ve seen over the year that these guys can make plays in big moments. And so, we’ll give them those chances as well as have some younger guys step up.”

The Chargers have been inconsistent on offense all season. Herbert’s rib injury, which happened in a Week 2 loss to the Chiefs, affected his play for a couple of games, but the injuries to the receiving group have had a bigger impact.

DeAndre Carter and Joshua Palmer have stepped up at times, but Los Angeles has been lacking a deep threat, with most of the passes being screens, dump-offs or within 10 yards of the line of scrimmage.

“For the people that are in the NFL, sometimes you just have to hang tough, and I think our group has done a really good job of that,” Chargers coach Brandon Staley said. “That’s just been the type of year it has been, but I think that our group is improving because we’re figuring out more ways to play. I think that is a positive with your group because it is reality.”

The Chargers need a win if they want a realistic shot at catching the AFC West-leading Chiefs.

A victory by Kansas City would give it a sweep of the season series and a three-game lead in the division with seven games left.

“We’re not looking ahead to being three games up, or whatever it is. We’re looking at what can we do to win today so that we can win on Sunday,” Mahomes said.

The Chiefs are 26-3 in games played in November or later since 2019. Meanwhile, the Chargers are 0-3 this season against teams with a winning record.

Derwin James had one of the hits of the year when he body-slammed Travis Kelce near the goal line late in the third quarter of the teams’ first meeting. The tackle added another chapter to a competitive rivalry between the Chargers safety and the Chiefs tight end.

According to Next Gen Stats, James has covered Kelce on 36 snaps during their six matchups since 2018. Kelce has been targeted seven times and had only four receptions for 14 yards.

Against the rest of the Chargers’ defenders in the same period, Kelce has 45 receptions for 605 yards and four touchdowns.

“It’s always fun playing him. He knows who I am, and I know who he is,” said James, who had nine tackles in the Week 2 game. “Every week is fun whether it is (Kyle) Pitts, (George) Kittle or Kelce. Out of all of them, Kelce is probably the best one at getting open when the play breaks down and getting separation.”

The Chargers and Chiefs offensive lines are among the league leaders in fewest sacks allowed.

Los Angeles has allowed a league-low 13 and is tied with Tampa Bay with the lowest percentage on dropbacks at 3.2 percent.

Kansas City is second with a sack-allowed rate of 4.2 percent with 16 allowed, which ranks fifth.