An ode to decorating with plaid 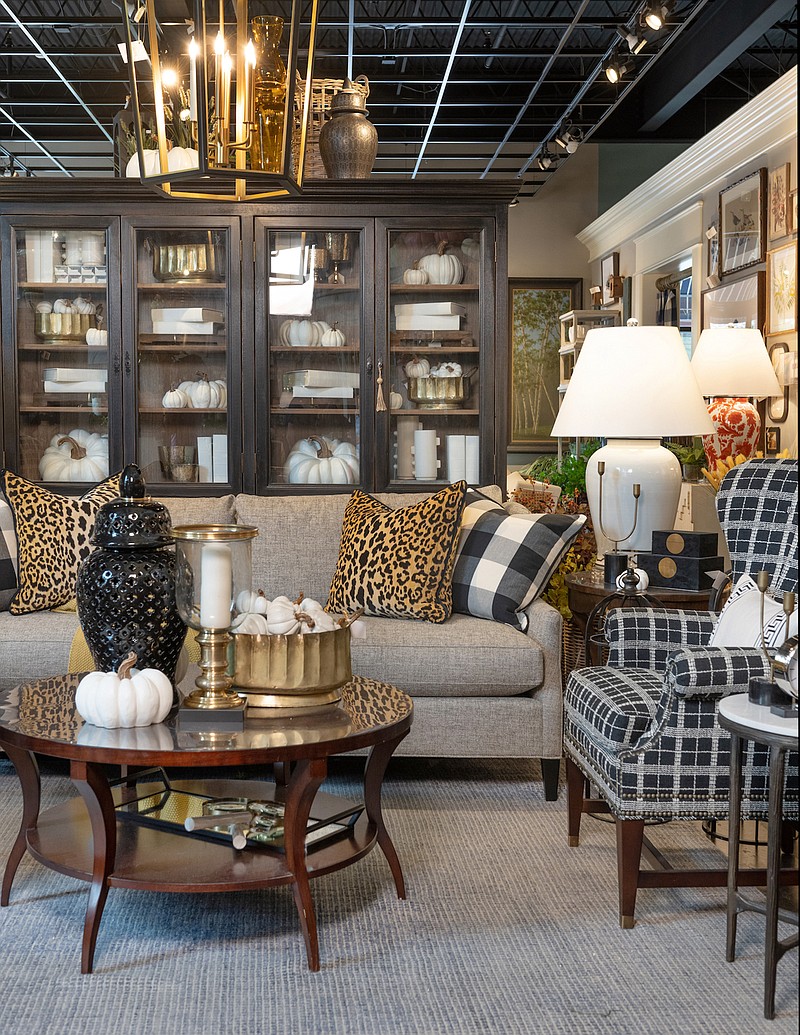 Buffalo plaid pillows and a black and white plaid chair mix and match beautifully in this stately room. (Provided photo/TNS)

From decorating with buffalo check to styling classic tartan, plaid is an incredibly versatile pattern with a rich history. While plaid is often associated with fall and winter, you know I believe this pattern looks great all year long.

I've previously written about my love for plaid, from Scottish tartans to the bold and beautiful check pattern. While we certainly don't have the time for me to wax poetic about every type of plaid there is, I did want to take a moment to highlight the variety of ways you can decorate with your favorite plaid pattern this season and beyond.

Suffice it to say, this may be one of the Scottish's greatest legacies in the fashion world thus far. While the history of tartan goes back to as early as 3000 BC, and though ancient pieces of cloth have been found in more areas of the world than just Scotland, the Scots have become known for their ties to the textile. Dating back to the 1600s, the tartan pattern has been a mark of a Scottish man. Different patterns and colors served as clan or family identifiers, and they wore kilts that proudly showed off their family's grand plaid. Scottish families continue to carry on the tartan tradition, and in the textile world, the timeless patterns will never go out of style.

If you ask someone to close their eyes and imagine plaid, it is likely a tartan that immediately comes to mind. Tartan (or the Scottish plaid) is the plaid pattern best characterized by horizontal and vertical lines intersecting each other that together form different sizes of squares or checks all throughout the fabric. Among the most popular patterns are the Royal Stewart, Clan Wallace and Black Watch.

Go bold if your love for plaid is insurmountable. Decorate with this pattern in larger pieces like a sofa, rug or floor-to-ceiling window treatments. If you aren't fully on board with the plaid look, try using it as an accent in pillows or a throw blanket. Although it is used often around this time of year, plaid can be used year-round to add dimension to your design. I often think of plaid as a neutral in this way.

People often mistake gingham and buffalo check patterns for each other, but they are not the same. The two largest differences are scale and color. Buffalo check typically has a large scale and is traditionally found in red and black and white and black colorways. Gingham, on the other hand, is typically a small-scale pattern and traditionally found in red and white and blue and white colorways. Both have uniform squares made from crossing vertical and horizontal lines that, when overlapping, create darker squares. Both differ from a "checkered" pattern, which, like a checkerboard, consist of squares in two alternating colors wherein the same color does not share a side with a square of the same color. All these patterns are part of the family of checks.

Decorating with gingham and buffalo plaid

Wander off-grid to a playful cottage aesthetic by decorating with gingham. While this pattern has been thrust into the spotlight with the emergence of cottagecore, its popularity as a pattern is not new.

While decorating with gingham may conjure quaint country cottage vibes, it is actually a very versatile pattern. With the simple use of scale and color, this pattern can transition from a French country table to a stately dining room wall. Larger-scale prints work well on drapes, walls and bold vibrant colors. In a small-scale pattern or natural or toned-down colorway, the fabric boasts a beautiful aged finish -- perfect for a period home. Pair your gingham with florals for a classic look that can work in any room.

The checkerboard motif has recently stepped into the spotlight as the check of the moment. The classic staggered arrangement of (traditionally) black and white squares, reminiscent of a chessboard, is once again popping up across flooring, textiles, wallpaper and more. When used lightly, these checks can add a bolt dash of print and eclecticism into a room. While black and white checks go through periods of peak popularity (like right now), they never completely go out of style and complement many other patterns and styles. Apply a checkered fabric to pop a traditional armchair; selecting a more neutral pattern (white on gray) gives it a modern feel, while a more distinctive pattern (blue and white) looks more traditional.

The windowpane, as the name implies, is a variation of the plaid pattern, which looks reminiscent of windowpanes. Consider this fabric the bigger brother of the graphic check that is somehow in a league of its own thanks to its popularity in men's clothing.

In the living room, plaid pillows, blankets, window panels, rugs and upholstery add subtle visual interest without the busyness of a more complex pattern. In the kitchen and dining room, coasters, napkins, place mats, tea towels and tablecloths or runners bring in a dash of style. And in the bedroom, crisp windowpane bedding elements are so much more exciting than solid alternatives.

While often associated with men's suiting fabric, chef's pants and Sherlock Holmes' hat, houndstooth has found firm footing in home decor. More dynamic than idle squares, houndstooth looks like it's on the move. It's a type of twill made by alternating bands of four dark and four light threads in both vertical and horizontal directions. One thread is advanced at each pass to give it its characteristic slant. Small-scale houndstooth is casually referred to as puppytooth. While there's no dimension threshold separating the two, houndstooth at this more reserved scale is undeniably classic.

While houndstooth traditionally has a clubby, highbrow tone, used in the right way it can also feel fresh, bright and youthful. Windowpane plaid isn't the only one capitalizing on its relationship to men's clothing. To add a tailored, clean and classic look associated with men's fashion, incorporate houndstooth in one of a variety of scales and colors. Although it's considered a traditional pattern, large-scale houndstooth has a more contemporary aesthetic. But it is also important to consider the size of the houndstooth pattern in relationship to the components of your furniture piece. A larger pattern "falling off" the side of a thin swooping arm of a chair would lose its refinement. Elegance is in the details. 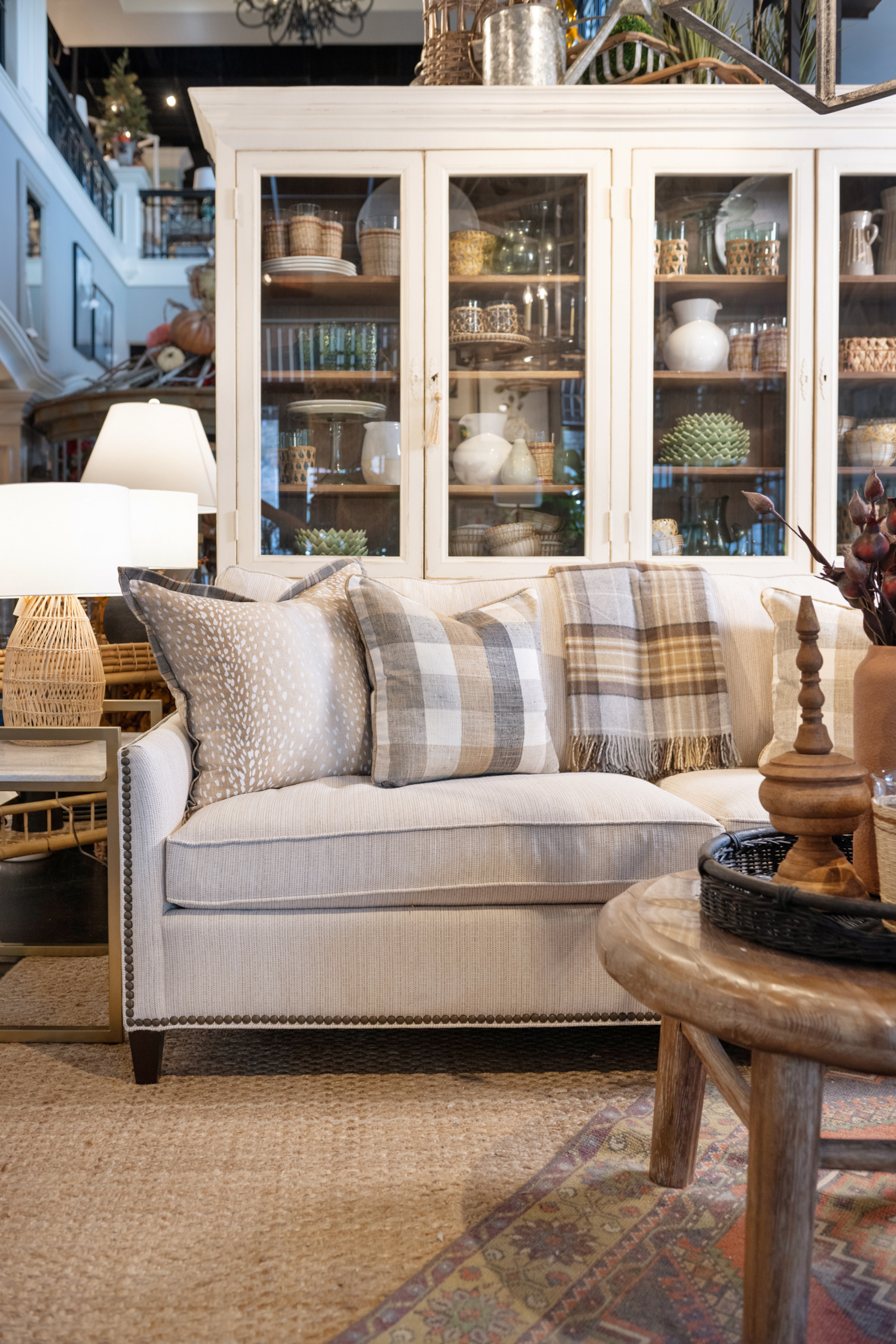 Decorate with neutral plaid to get a look you love without going overboard. (Provided photo/TNS) 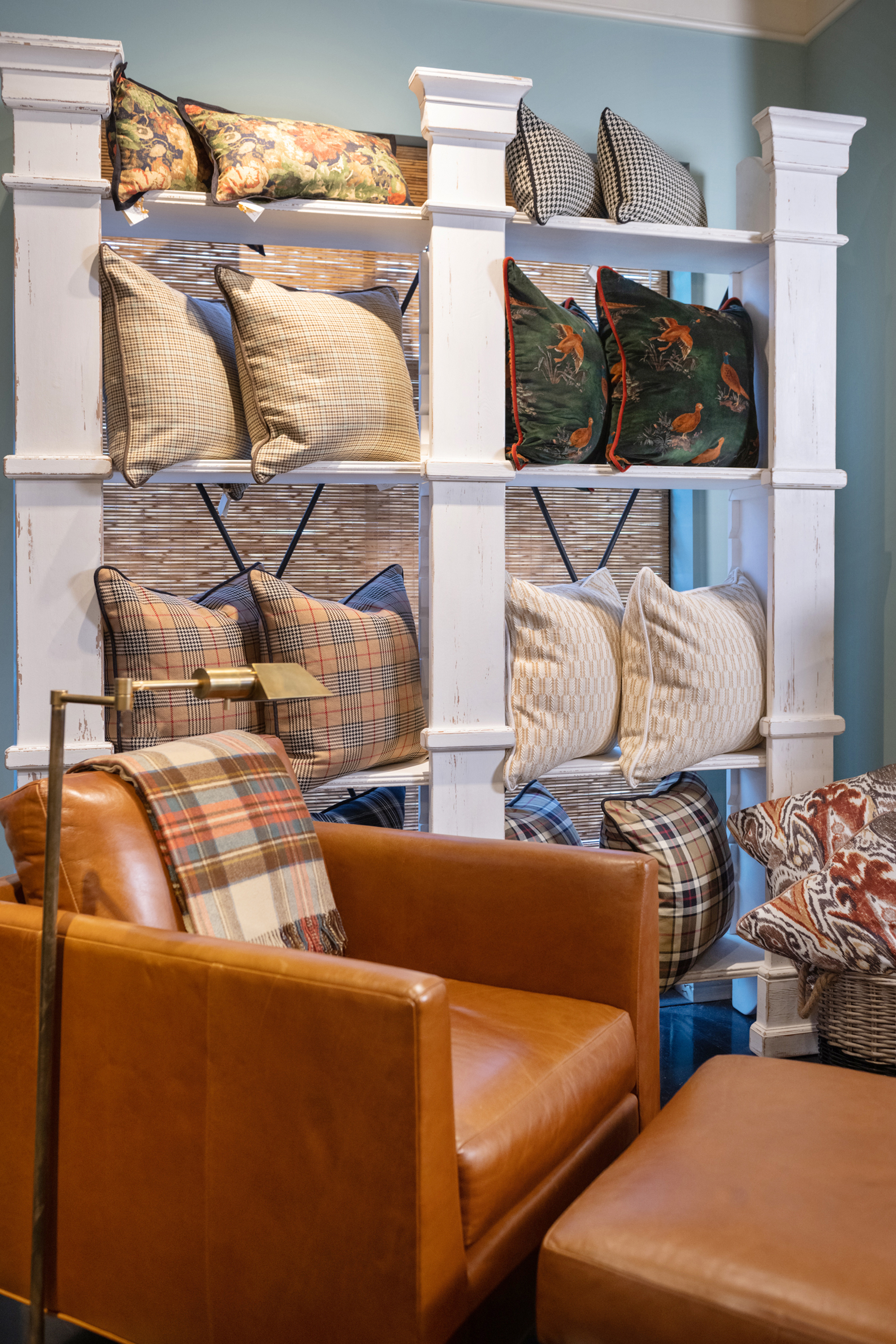 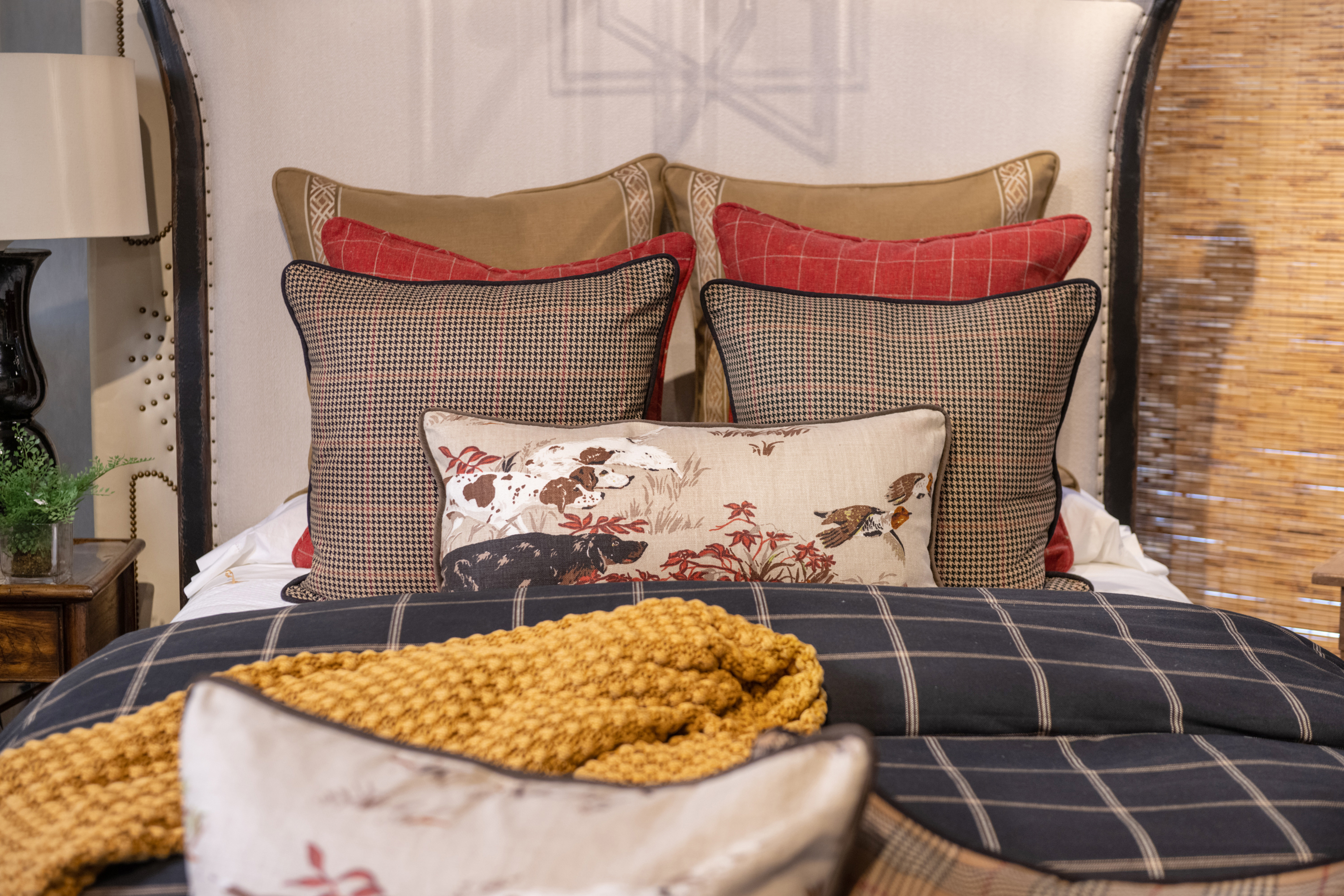 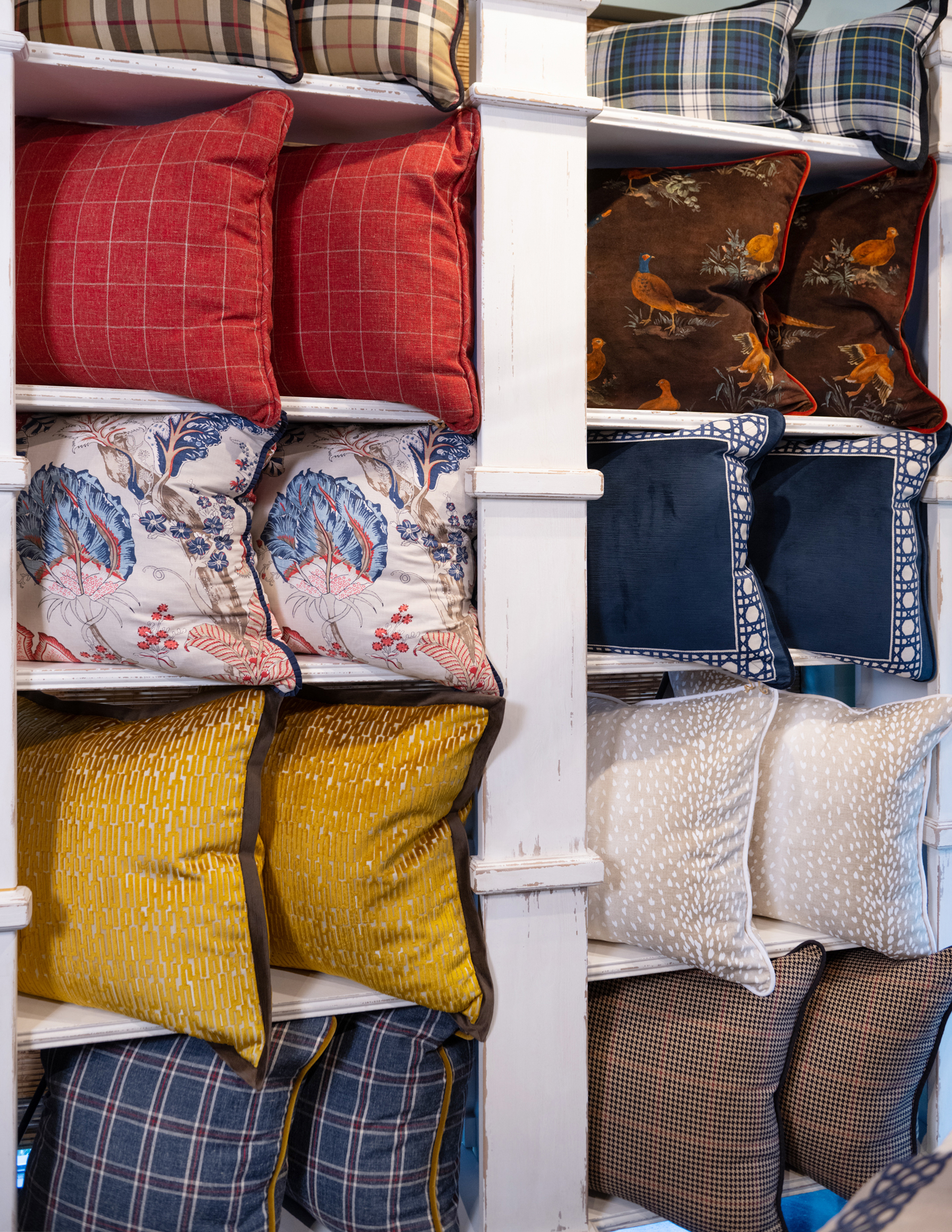 Windowpane, tartan and checkerboard plaids are on full display in this beautiful pillow wall. (Provided photo/TNS) 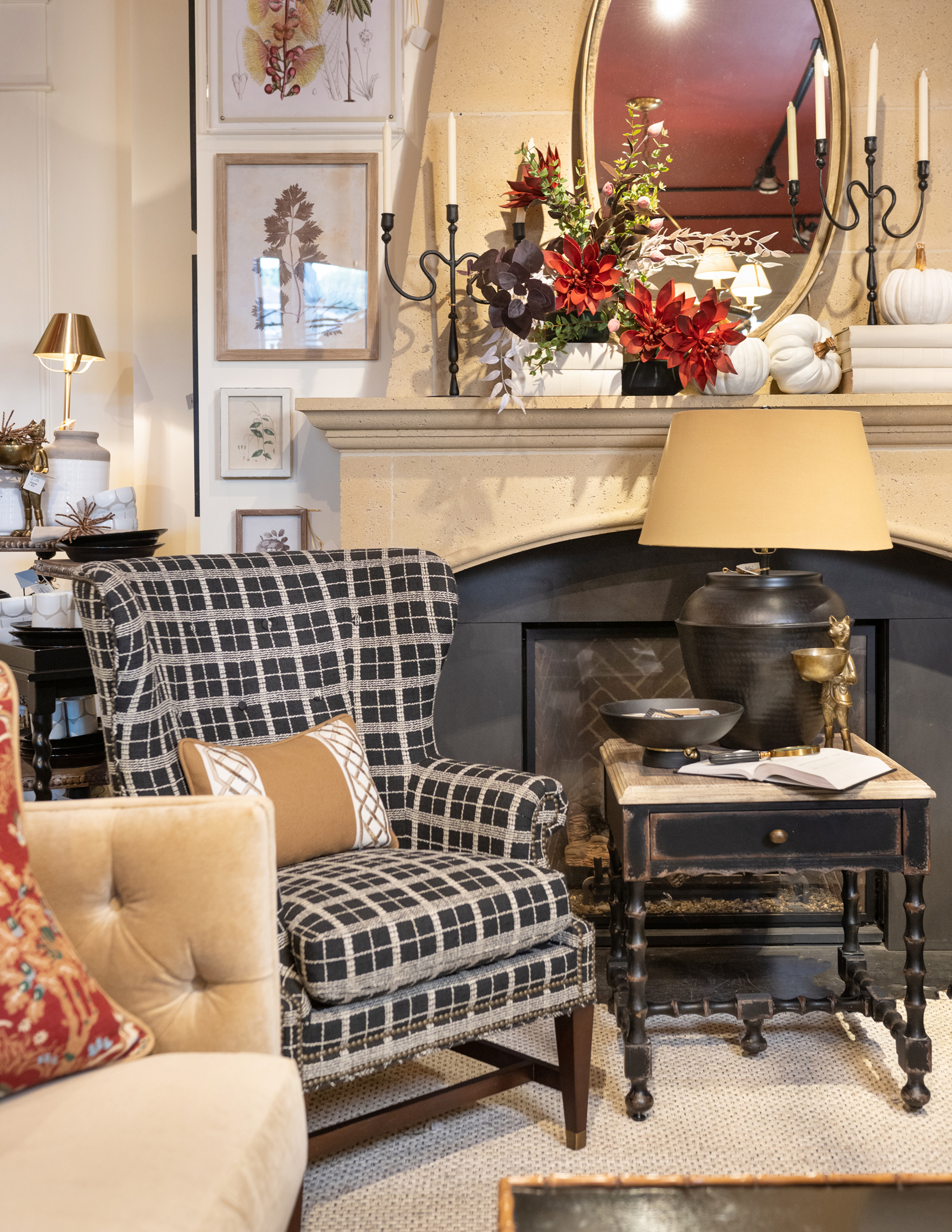 This black and white checkered plaid is a striking addition to a neutral living room. (Provided photo/TNS)

Print Headline: An ode to decorating with plaid