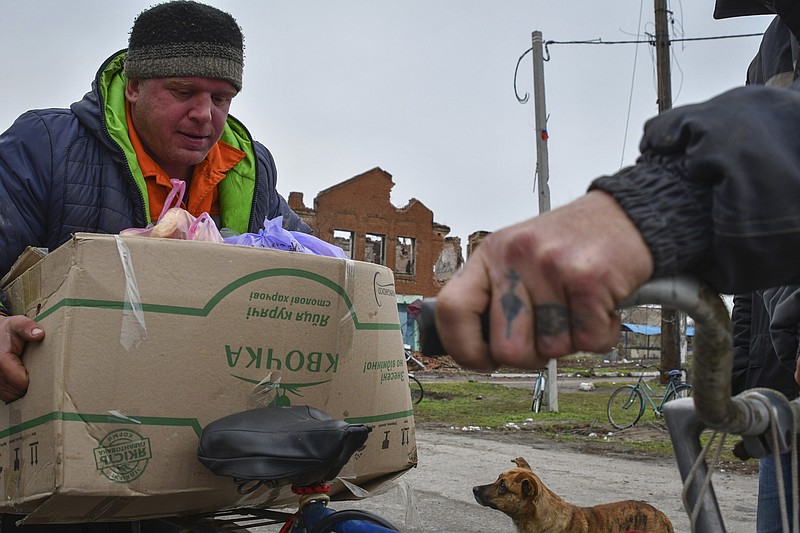 KYIV, Ukraine (AP) -- Ukraine's electricity grid chief warned of hours-long power outages Friday as Russia zeroed in on Ukraine's energy infrastructure with heavy artillery and missile attacks that have interrupted supplies to as much as 40 percent of the country's people at the onset of winter.

"You always need to prepare for the worst. We understand that the enemy wants to destroy our power system in general, to cause long outages," Ukrenergo's chief executive Volodymyr Kudrytskyi told Ukrainian state television. "We need to prepare for possible long outages, but at the moment we are introducing schedules that are planned and will do everything to ensure that the outages are not very long."

The capital of Kyiv is already facing a "huge deficit in electricity," Mayor Vitali Klitschko told the Associated Press. Some 1.5 million to 2 million people -- about half of the city's population -- are periodically plunged into darkness as authorities switch electricity from one district to another.

"It's a critical situation," he said.

Klitschko added that Russian President Vladimir Putin's military planners apparently are hoping "to bring us, everyone, to depression," to make people feel unsafe and "to think about, 'Maybe we give up.'" But it won't work, he said.

"It's wrong, it's (a) wrong vision of Putin," he said. "After every rocket attack, I talk to the people, to simple civilians. They (are) not depressed. They were angry, angry and ready to stay and defend our houses, our families and our future."

Kudrytskyi added that the power situation at critical facilities such as hospitals and schools has been stabilized.

Those facilities were targeted overnight in the northeastern Kharkiv region, where energy equipment was damaged, according to governor Oleh Syniehubov. Eight people including energy crews and police were injured trying to clear up the debris, he said.

Moscow's attacks on Ukraine's energy and power facilities have fueled fears of what the dead of winter will bring. Ukraine's energy infrastructure had again been targeted Thursday, two days after Russia unleashed a nationwide barrage of more than 100 missiles and drones that knocked out power to 10 million people.

Those attacks have also affected neighboring countries like Moldova, where a half-dozen cities across that country experienced temporary blackouts.

In the past 24 hours, Russian forces unleashed the breadth of their arsenal to attack Ukraine's southeast, employing drones, rockets, heavy artillery and warplanes that killed at least six civilians and wounded six others, the president's office said.

In the Zaporizhzhia region, part of which remains under Russian control, artillery pounded 10 towns and villages. The death toll from a Russian rocket attack on a residential building in the city of Vilniansk on Thursday climbed to 10 people, including three children.

In the wake of its humiliating retreat from the southern city of Kherson, Moscow intensified its assault on the eastern Donetsk region, where Russia's Defense Ministry said Friday its forces took control of the village of Opytne and repelled a Ukrainian counteroffensive to reclaim the settlements of Solodke, Volodymyrivka and Pavlivka.

The city of Bakhmut, a key target of Moscow's attempt to seize the whole region of Donetsk, remains the scene of heavy fighting, the regional governor said.

The Russian Defense Ministry also said Ukrainian troops were pushed back from Yahidne in Ukraine's eastern Kharkiv province, and Kuzemivka in the neighboring Luhansk province. Donetsk and Luhansk were among the four Ukrainian provinces illegally annexed by Moscow in September, together with Kherson and Zaporizhzhia.

At the same time, Moscow is fortifying its defenses in the southern region to thwart further Ukrainian advances. Russian troops have built new trench systems near the border of Crimea, as well as near the Siversky-Donets River between Donetsk and Luhansk Oblasts, according to a British Ministry of Defense report.

Meanwhile, Ukrainian and international investigators were forging ahead on uncovering suspected war crimes committed by Russian forces during the Kharkiv region's near seven-month occupation. Ukraine's National Police said Friday that its officers had initiated over 3,000 criminal proceedings against Russian troops.

Reports of torture and other atrocities committed by Russian troops have also emerged from the southern Kherson region, where Ukrainian officials said they have opened more than 430 war crimes cases and are investigating four alleged torture sites.

Alesha Babenko, a 27-year-old from the village of Kyselivka said he was arrested by the Russians in September and locked in a basement, then beaten daily while bound, blindfolded and threatened with electric shocks.

"I thought I was going to die," he told the AP.

"We have received credible allegations of summary executions of persons hors de combat and several cases of torture and ill-treatment, reportedly committed by members of the Ukrainian armed forces," Bogner said.

The recapture of Kyselivka after Russia's withdrawal last week has sparked hopes in neighboring Mykolaiv province that they will once again have tap water, which was switched off after the village fell into Russian hands. But Mykolaiv administrator Vitali Kim predicted Friday that could take several weeks.

Hungry and cold, Kherson residents lined up Friday for food from a charity, with many saying they had nothing to eat and had no heat or electricity. Residents were further shaken after a missile struck the fourth floor of an apartment building, reminding them that the Russian occupation may be over but not the danger from Russian missiles.

"There was an explosion ... it was very scary. We cannot calm down," said Tatiana Kruvorchko, who lived in the building.

Despite the tremendous hardships across Ukraine, one hopeful sign emerged with the news that the first train from Kyiv to Kherson would be departing Friday night. Ukraine's state rail network Ukrzaliznytsia said 200 passengers will travel on the train -- the first in nine months.

Dubbed the "Train to Victory," the train's carriages were painted in eclectic designs by Ukrainian artists and the tickets were sold as part of charity project. 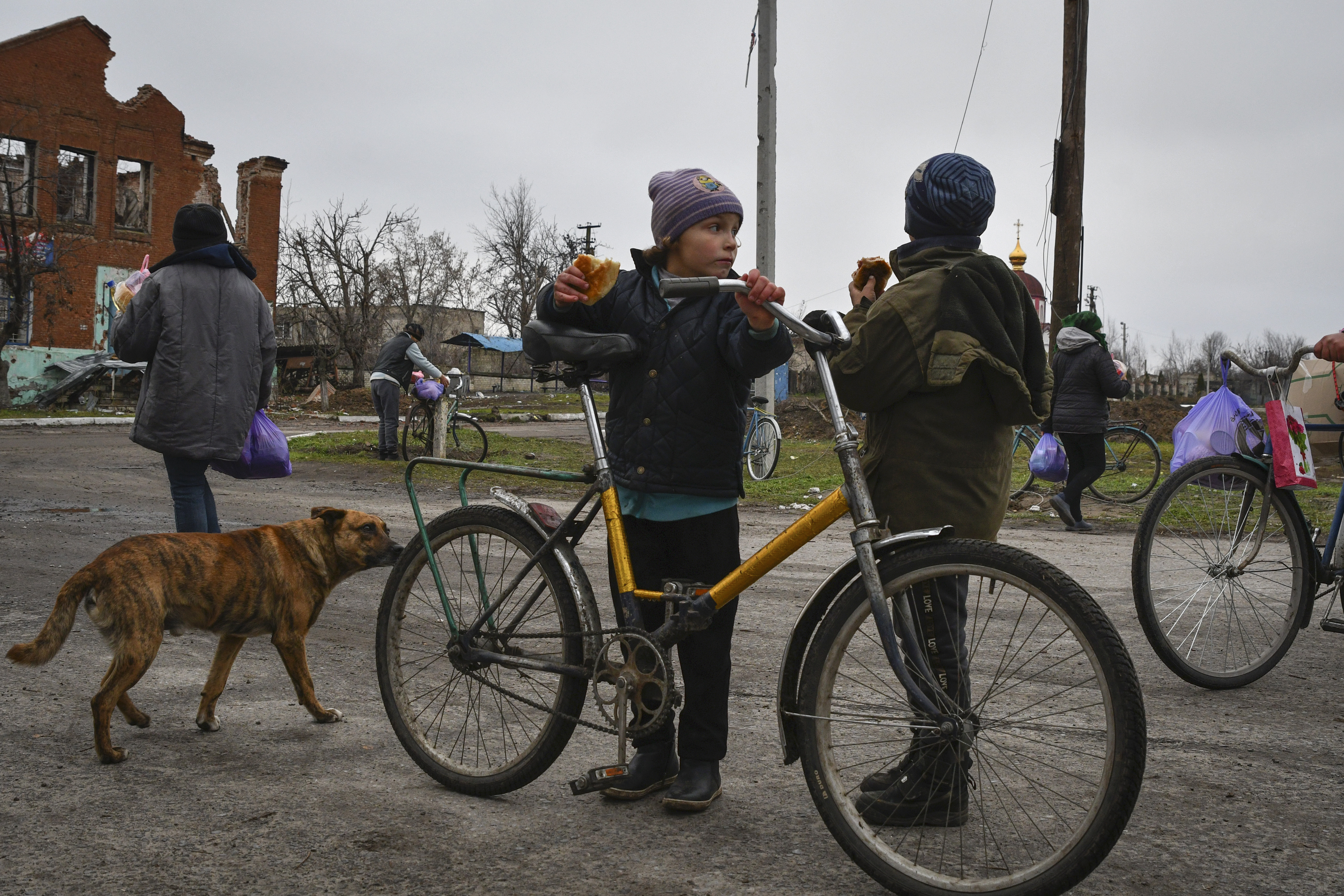 An Orthodox Church is seen amid destruction after shelling in the village of Drobysheve, Donetsk region, Ukraine, Friday, Nov. 18, 2022. (AP Photo/Andriy Andriyenko) 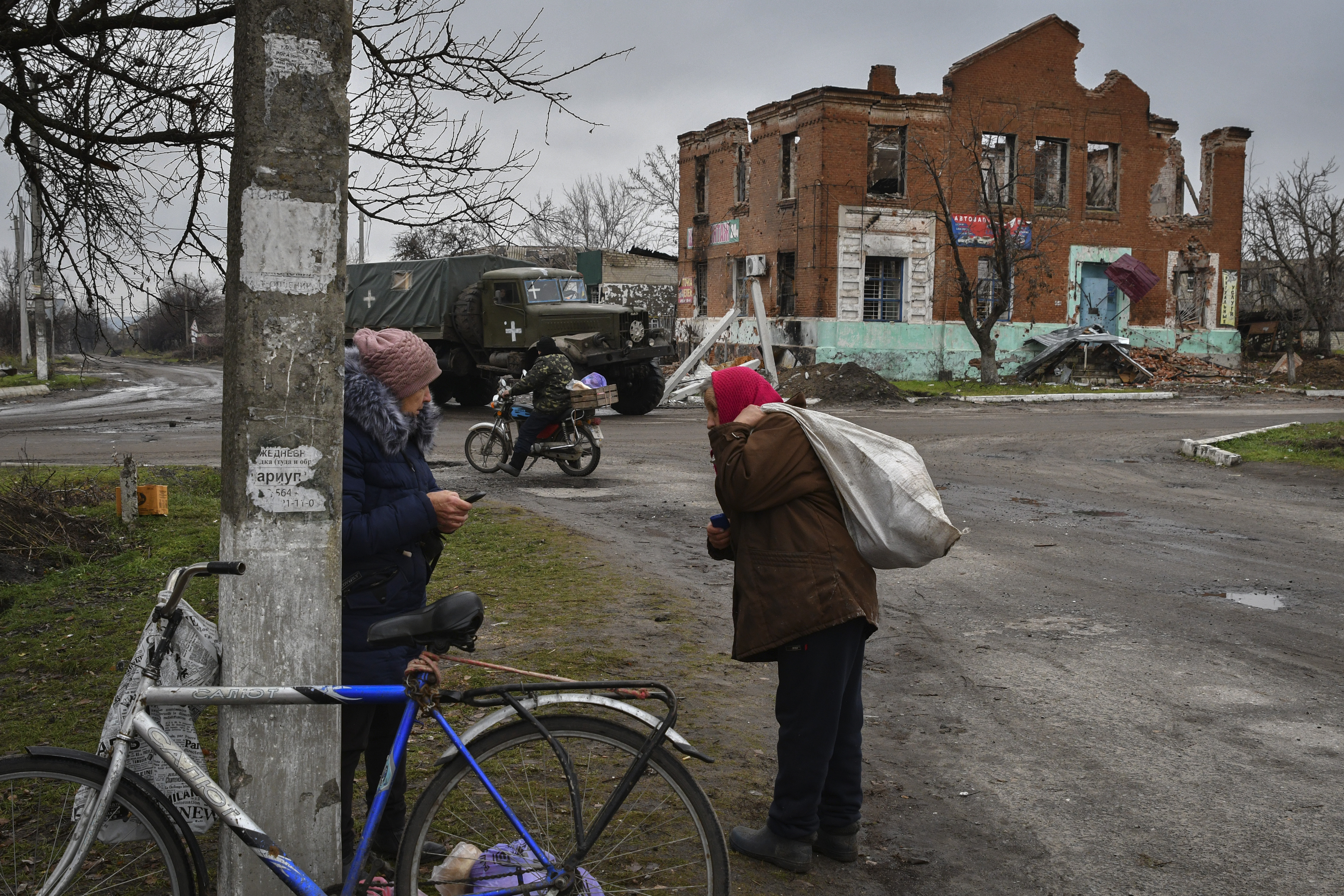 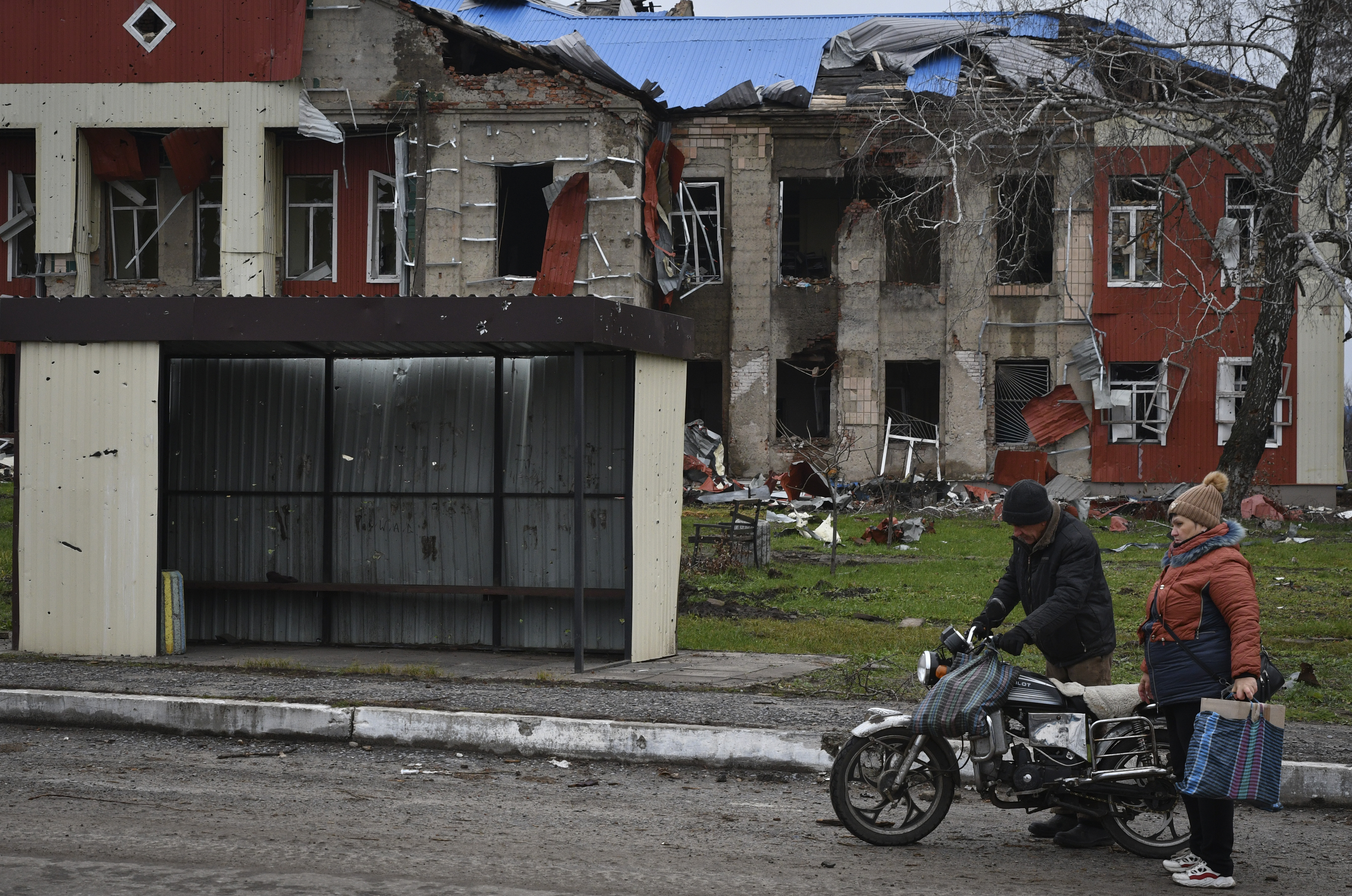 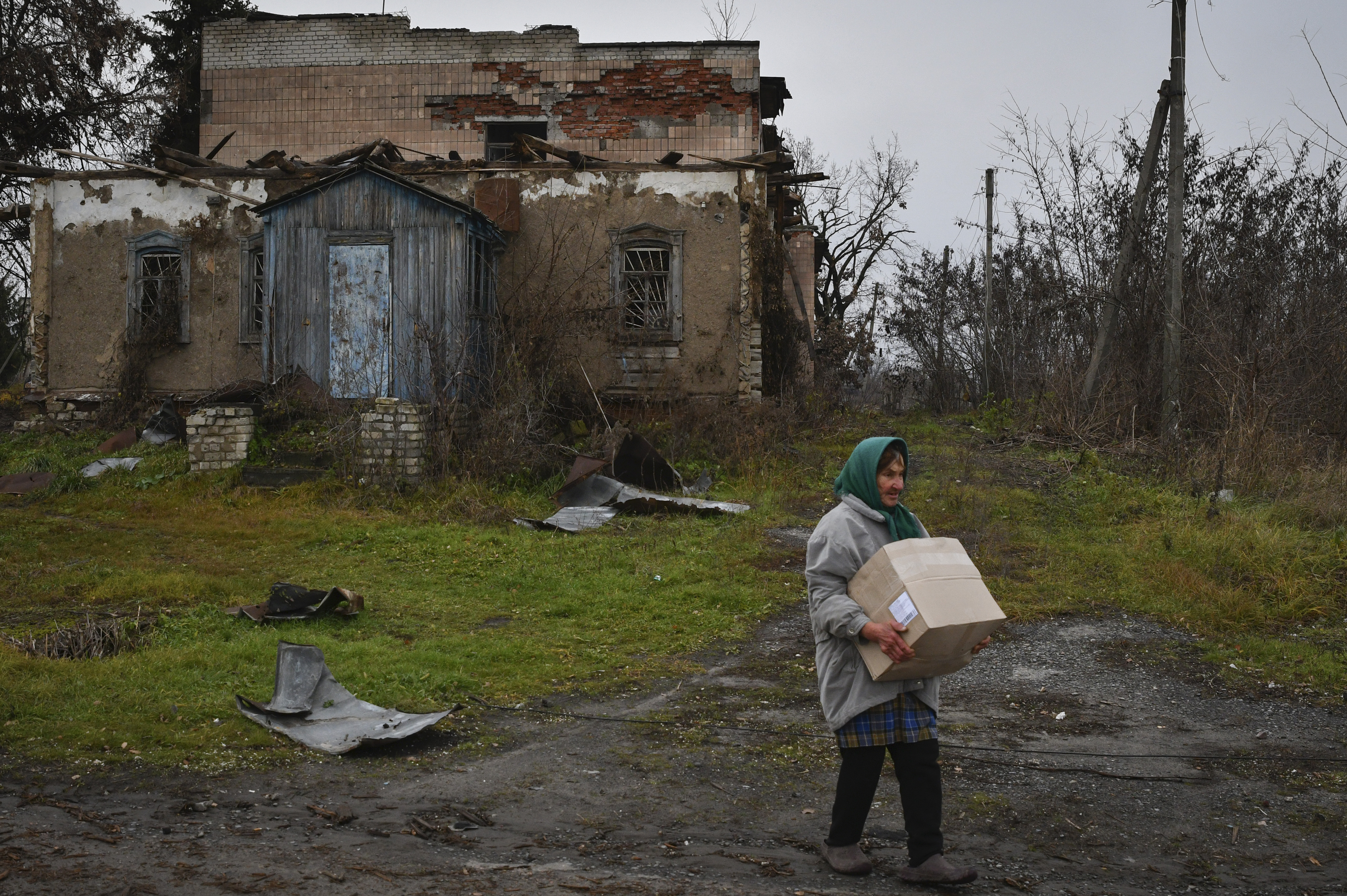 A woman carries a box with food after receiving it at a humanitarian aid point in the village of Drobysheve, Donetsk region, Ukraine, Friday, Nov. 18, 2022. (AP Photo/Andriy Andriyenko) 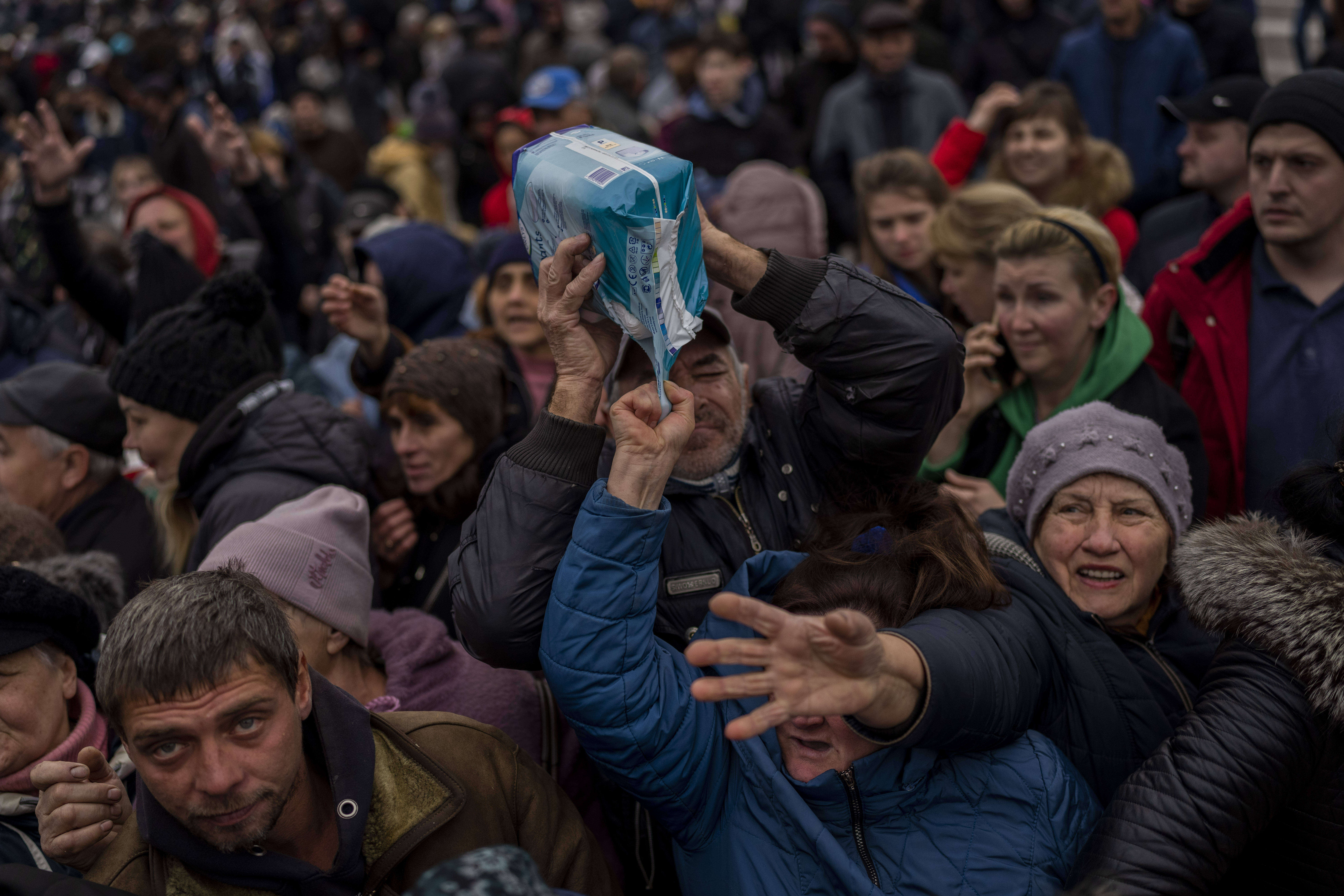 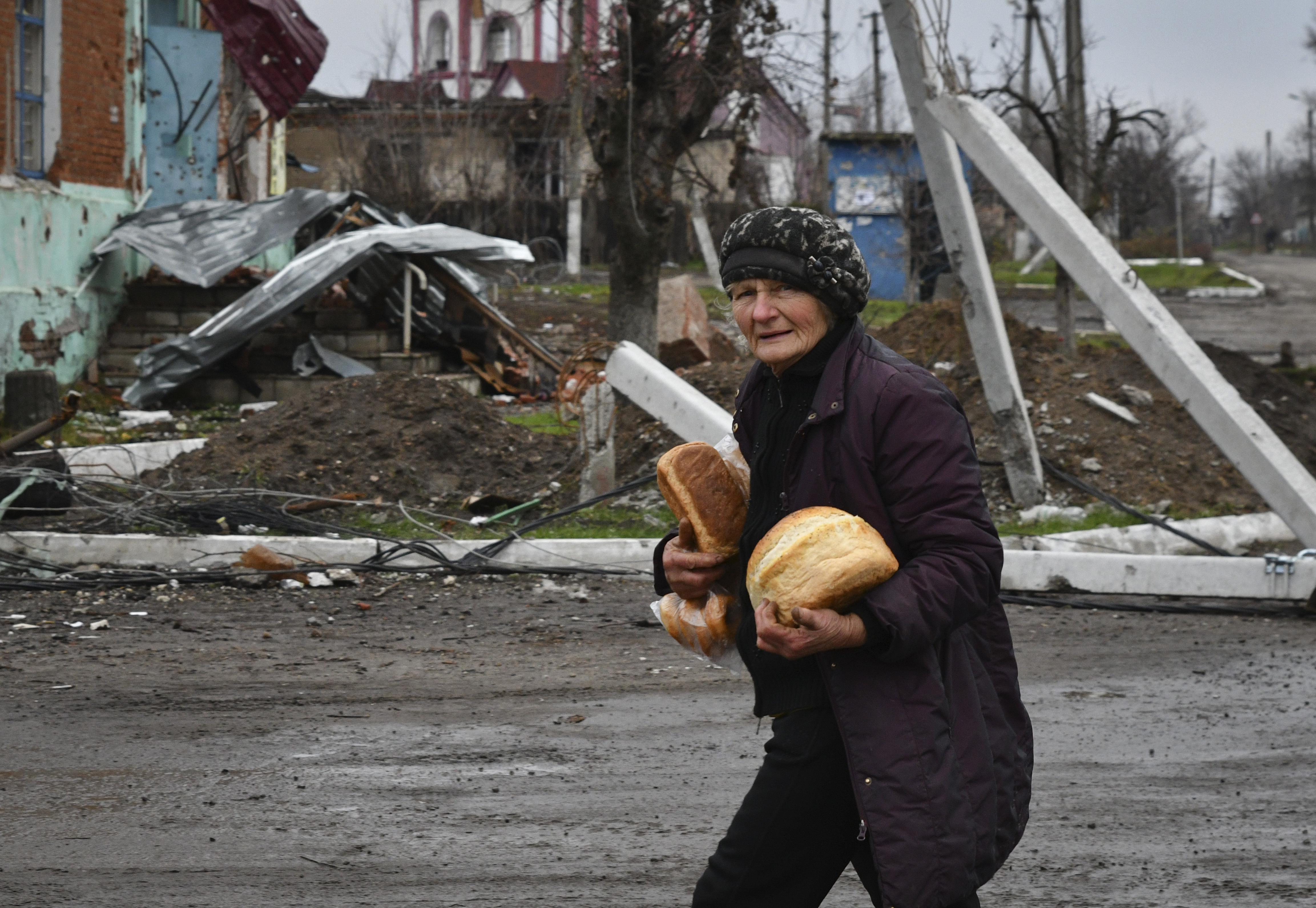 A woman carries bread after receiving it at a humanitarian aid point in the village of Drobysheve, Donetsk region, Ukraine, Friday, Nov. 18, 2022. (AP Photo/Andriy Andriyenko) 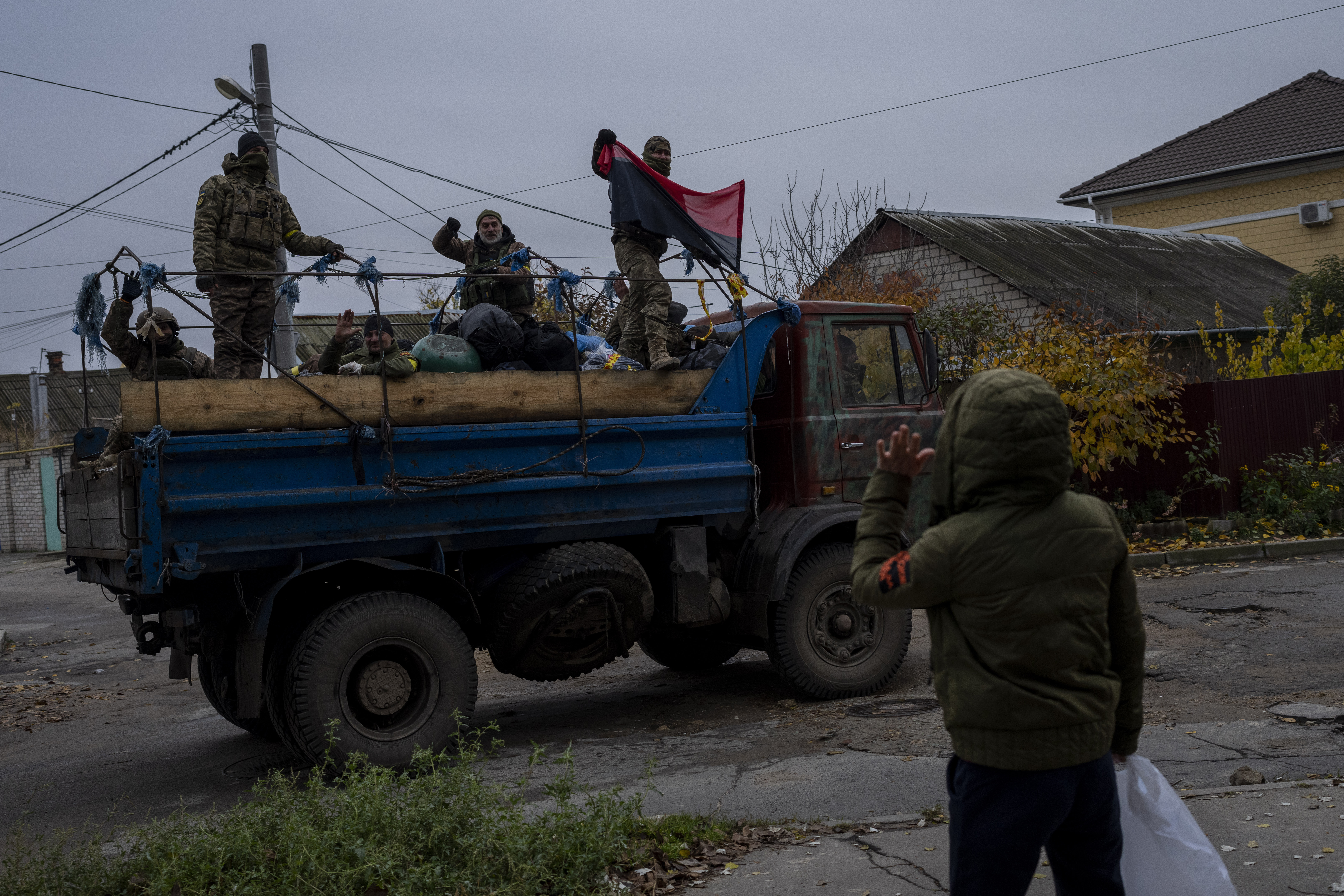 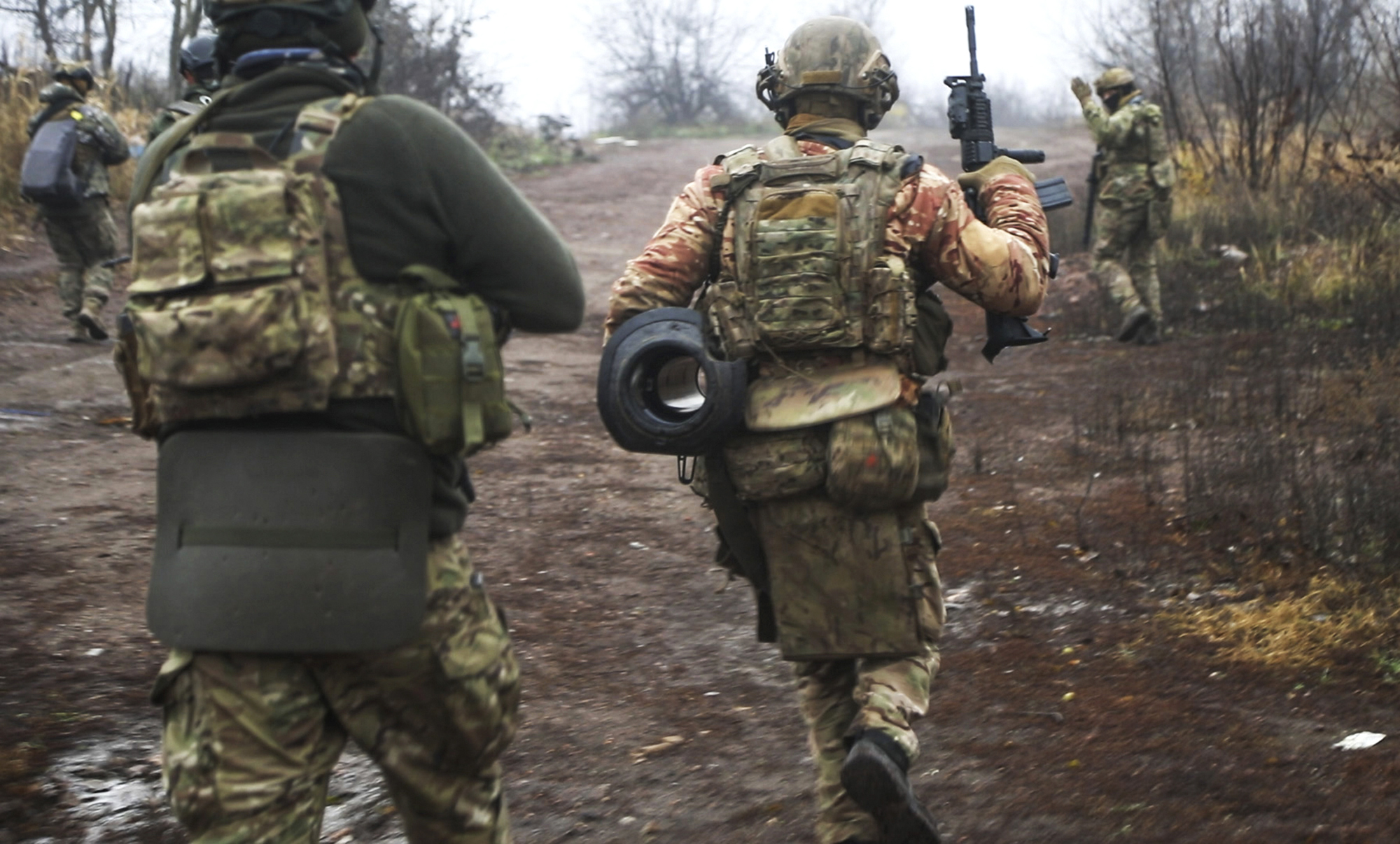