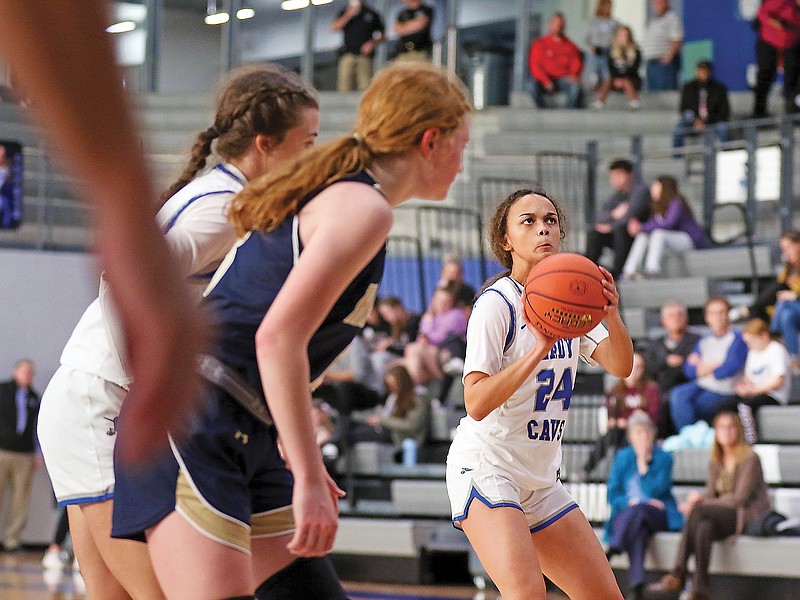 Kambry Pistel of Capital City gets set to shoot a free throw during a game against the Helias JV team in the Holiday Hoops Tournament last season at Capital City High School. (News Tribune file photo)

“I think that’s our biggest turnaround since I got here three years ago,” Capital City coach Ashley Agee said. “The style of play and the kids really getting after it. Three years ago, we didn’t do that, hustle was a walk, so just changing the culture and being leaders and being teammates. Wanting the best for our teammates not ourselves.”

The Lady Cavaliers continue that growth at 7:15 p.m. today when they open the season against Licking at the Blue Fish Basketball Shoot-Out in Rolla.

Agee said though she expects a somewhat sloppy game, as she said is usual for season-opening matchups, she wants to see that culture continue to take hold.

“Running and doing the things that we’ve been working on for the last two and a half weeks,” Agee said of what she is looking for today. “… They’re gonna make mistakes, but just going in knowing that they’re listening, they’re learning, they’re soaking it in. … Taking that in and seeing some leadership from the older ones and sharing the ball.”

Those older ones are seniors Natalie Allison and Rylea Sanning, as well as junior Kambry Pistel. Agee said that trio will fill the leadership roles this season and will highlight a regular lineup including junior Jada Anderson and sophomores Addison Jones and Amaura Austell.

“Natalie Allison was our leading scorer last year and does a lot of things, she has a high IQ for basketball,” Agee said. “She is currently out with some shoulder things, so hopefully we’ll have her back right after Thanksgiving. … Jada Anderson, my post player who shared time last year and started about half the season, she’s only gotten better. … Then Addison Jones, she was my starting point guard last year, she’ll be back and only looking for her to get better. She’s a great kid who leads by example.”

Agee said Jones will also be one of the main leaders on the team from the point guard position.

“I always think she’s the leader on the floor, bringing the ball up,” Agee said. “I think she’s a natural leaders, she’s not a big talker … but she’s textbook. She works hard, high IQ, good motor and does everything by example on the floor.”

The Lady Cavaliers enter the season with 10 players on varsity and two injuries, including Allison, so along with the starting five of Pistel, Sanning, Anderson, Jones and Austell, junior Michele Narug, sophomore Aslyn Marshall and sophomore Danijah Fluellen will get time off the bench.

“Michele Narug, she’s coming back from an ACL team midseason last year, so she’s getting back and she’s handles it pretty well,” Agee said. “… Aslyn Marshall, she saw some time a little bit last year in the post, she’ll be our second post this year, but she’ll probably get a lot of time when Jada needs a sub. And Danijah Fluellen, she’s another quick little guard, … she’s really quick off the dribble, she likes to go to the hole.”

The youthful Capital City roster will take on a schedule largely similar to the one that led them to a 7-18 record last year, with appearances in the Tipton Tournament from Nov. 28 through Dec. 3, the 12 Courts of Christmas Shootout on Dec. 17, the Holiday Hoops Tournament from Dec. 28-30 and the Southern Boone Classic from Jan 30 to Feb. 4.

The Cavaliers scored 44.6 points per game last year and allowed 52, Agee said lowering the latter number is her main concern as the year gets started.

“We went back to last year and looked at where we were getting beat, it was on second-chance or third-chance opportunities,” Agee said. “And it was just simply rebounding and points in the paint. I always say, ‘Even if team hit 10 3s on you, that’s only 30 points.’ … We changed up our main a little bit to protect the paint, making sure we’re offering help. We no longer deny, it’s just you’re on ball or you’re help. We want to make teams shoot contested, outside shots. Team’s are gonna shoot shots, but you can kind of determine the ones they take.”

Agee is looking forward to the continued progression of the program.

“I’m just looking for a better season,” she said. “I think we can keep growing and progressing. We’re going in the right direction.”