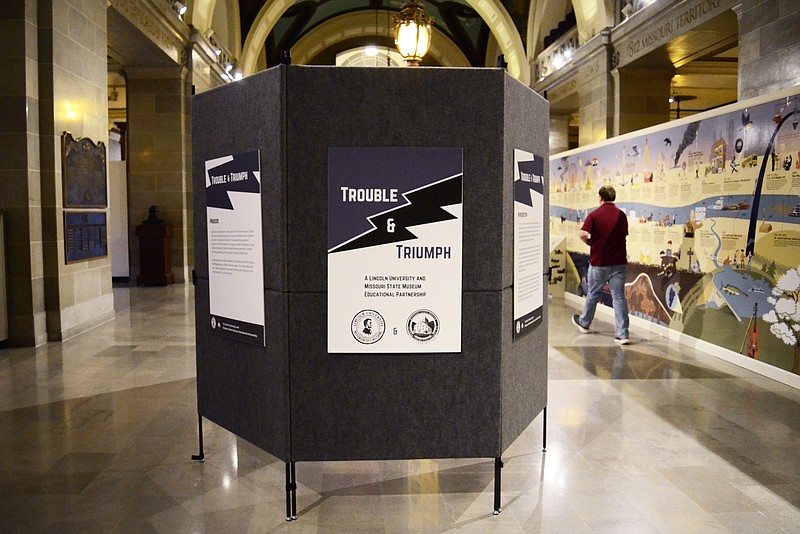 Eileen Wisniowicz/News Tribune A Capitol employee walks by the "Missouri Black History" exhibit in the Missouri State Capitol on Thursday, Nov. 17, 2022. The exhibit was created by Lincoln University students in partnership with the Missouri State Museum.

An updated "Missouri Black History" exhibit is on display in the Capitol through the end of the year thanks to a partnership between the Missouri State Museum and Lincoln University.

Lincoln, one of Missouri's two historically Black universities, offered a special topics course in museum studies last fall after it was approached by the Missouri State Museum's former assistant director in 2020 with an idea to revamp the museum's Black history panels.

The COVID-19 pandemic and museum staff departures pushed the project back to May 2021.

A team of LU instructors and museum staff then worked during the summer to create the special topics course, which involved developing the course framework, selecting required readings and creating assignments.

Christine Boston, associate professor of anthropology and sociology at Lincoln, taught the course the following fall and a dozen students from a variety of majors enrolled.

Coursework centered around theory and application of anthropology and political science concepts, as well as themes from museum staff. Classes were held both on campus and at the museum.

"This in and of itself was a challenging endeavor, but then we had a series of additional challenges, making this an even more daunting undertaking," Boston said in a museum news release. "Several instructors left for different roles. What started as a committee of six ended with two: myself and Tiffany Patterson from the museum. Thankfully, we had a really good foundation to work from, having spent the summer discussing our goals, vision and execution of the course, so we were able to manage."

Students were given autonomy to select and research content they found to be important or thought had appeal to wide and diverse audiences.

Boston said her goal was to create cohesive student groups to work together on a panel of their choosing.

"They produced some really great content and told some amazing and hard stories in their panels," she said.

Mary Franklin, a senior sociology major who worked on the Pennytown portion of the project, said she hopes museum visitors are enlightened by the updated exhibit.

"I hope this project teaches visitors that African-American people are community builders, entrepreneurs, professionals and proud people," she said.

Lincoln's partnership with the Missouri State Museum will continue with updates to several other exhibits in the works, including one on the Iron Riders and one on Black towns and settlements.

The "Trouble and Triumph" exhibit is on display at the Missouri State Museum, located on the first floor of the Capitol, through the end of December. 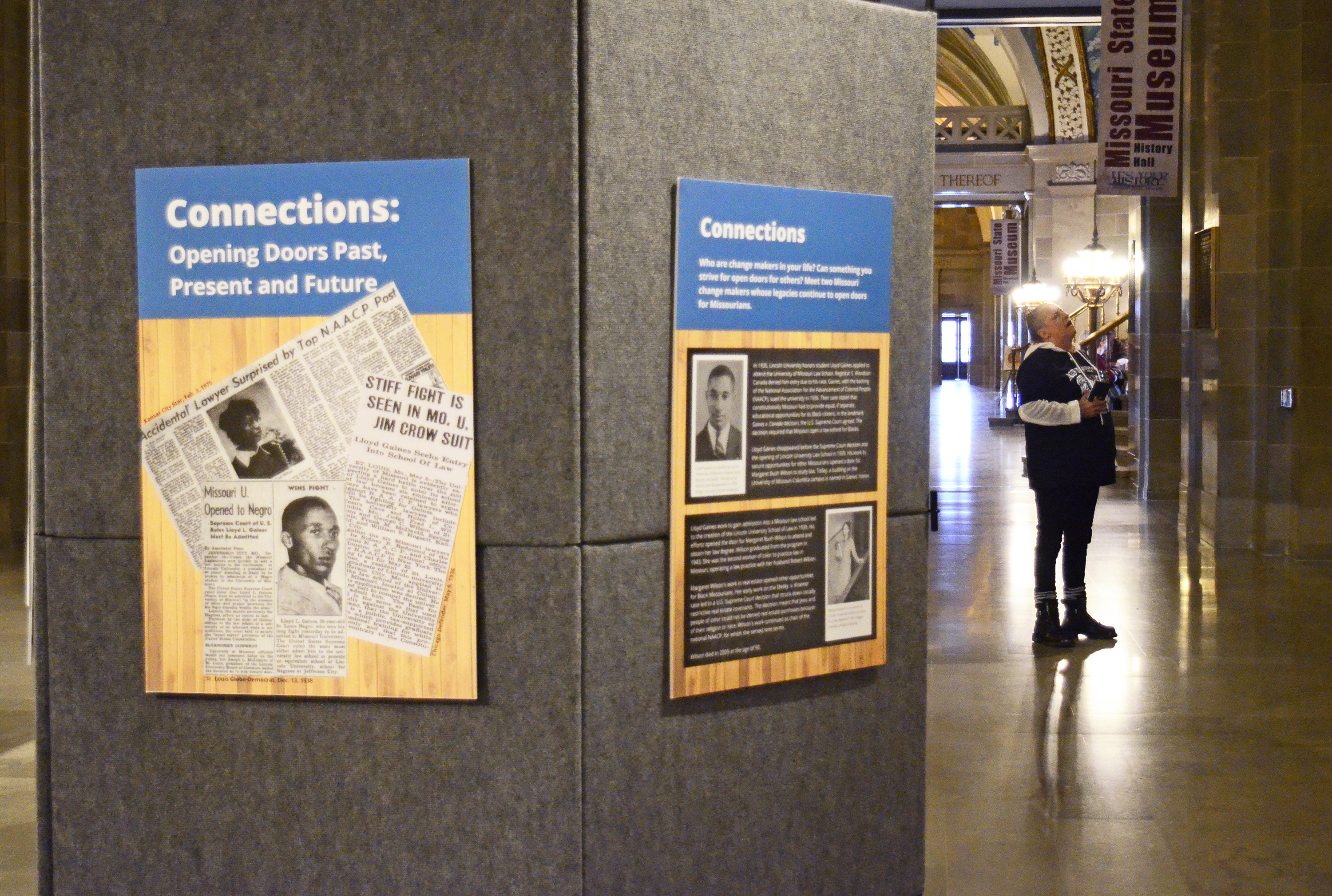 Eileen Wisniowicz/News Tribune A museum goer reads an article near the "Missouri Black History" exhibit at the Missouri State Capitol. Students from Lincoln University worked on telling the story of Pennytown and displaying it on the first floor of the Capitol. 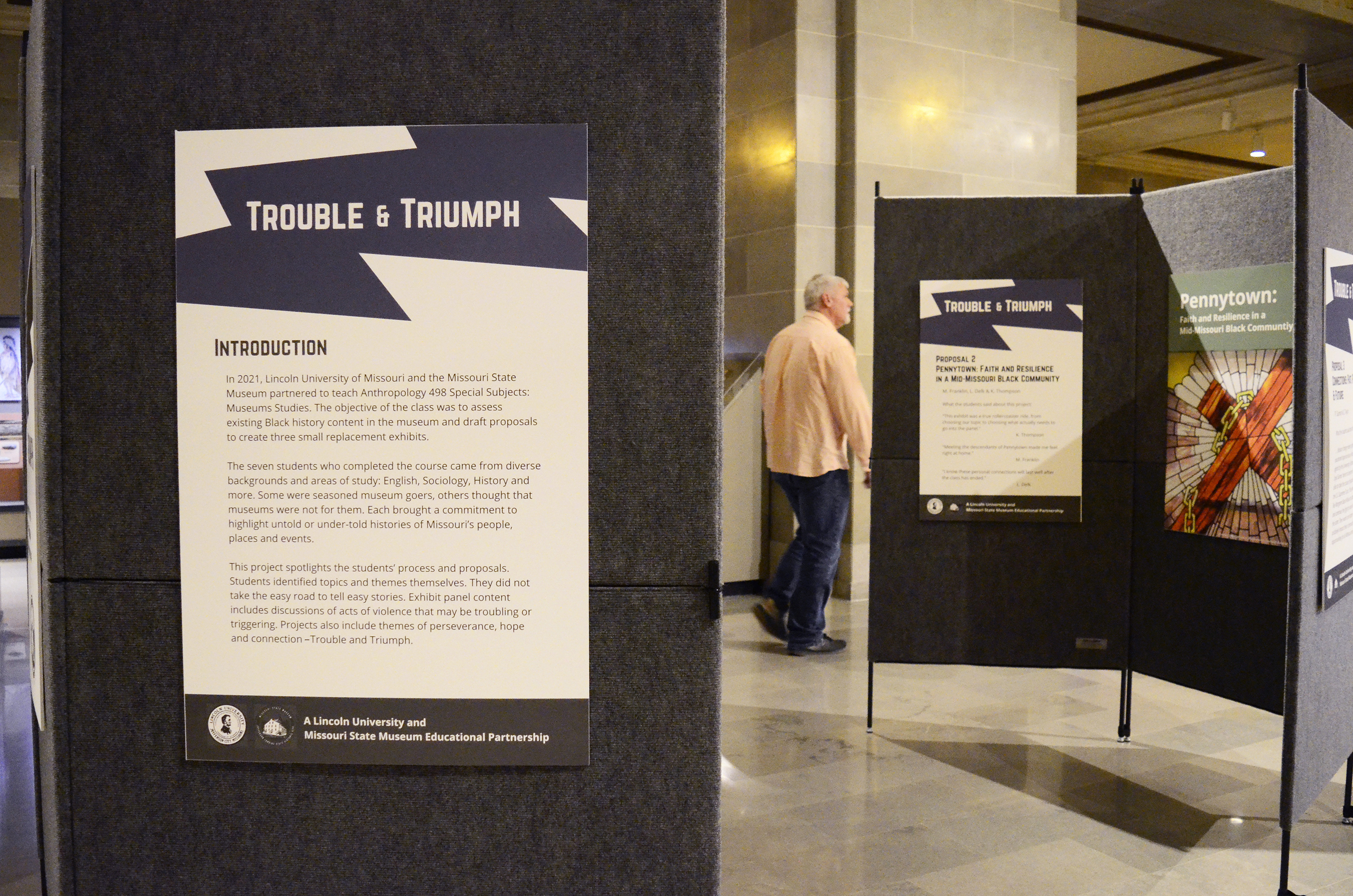 Eileen Wisniowicz/News Tribune A person walks by the "Missouri Black History" exhibit that can be found in the Missouri State Capitol. The exhibit focuses on untold stories of Black history throughout Missouri.