Chiefs RB Pacheco, a seventh-rounder, making most of his chances 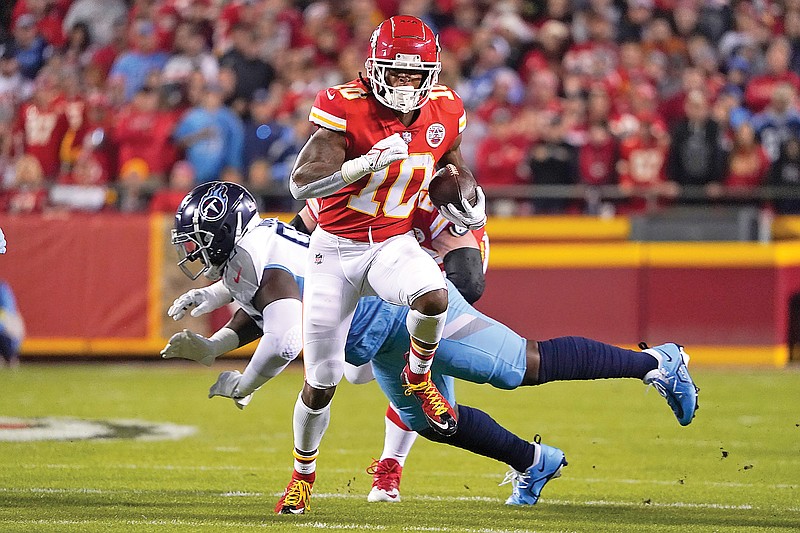 Chiefs running back Isiah Pacheco runs past a Titans defender during a game earlier this month at Arrowhead Stadium in Kansas City. (Associated Press)

The fact the seventh-round selection has supplanted a 2020 first-round pick underscores the point.

After showing flashes of brilliance in training camp, Pacheco has moved ahead of Clyde Edwards-Helaire on the unofficial depth chart in Kansas City, getting the bulk of the carries on gameday. He had season-highs of 16 carries for 82 yards last week against Jacksonville, when Edwards-Helaire never got a chance with the ball in his hands.

“I’ve definitely been going at it every week, getting the feel for different teams, different schemes,” Pacheco said.

“For me, it’s having the same mindset every day I come into the building: going to work, going to the practice field, go 100 percent, so when it gets to game day, go at a high level.”

Chiefs coach Andy Reid said this week it wasn’t by design Edwards-Helaire, their 2020 first-round pick, did not get a carry against Jacksonville, or that his only two targets in the passing game fell incomplete.

At one point, Edwards-Helaire was supposed to be in for an entire series, but the Chiefs went three-and-out.

Still, it’s not difficult to notice Pacheco has simply been more productive. He has 60 carries for 279 yards, which is more yardage than third-round pick Rachaad White of the Buccaneers on the exact same number of carries. Pacheco’s average of 4.7 yards per attempt is a half-yard more than Edwards-Helaire this season.

“He’s learning on the move, but he’s had some good snaps,” Reid said. “It’s worked out well where Clyde’s getting reps and he’s getting reps, and I think that’s healthy. We’re able to throw fastballs at the guys and then (Jerick McKinnon) is getting in there and doing his thing more on third downs.

“We’ll just keep bringing him along,” Reid said, “but I like his progress.”

The fact Pacheco was the penultimate running back selected in the draft -- the last if you consider Zander Horvath of the Chargers a fullback -- is a little hard to believe.

Pacheco tested better than nearly every other running back at the NFL scouting combine, tying for the best time in the 40-yard dash at 4.37 seconds despite his 215-pound frame.

Part of that might have to do with his inconsistent use at Rutgers, where Pacheco never got more than 169 carries in any of his four seasons. Some teams may simply not have had enough tape on him to fully realize his potential.

Yet time has proven where players are drafted -- running backs in particular -- hardly portends success or failure.

Sure, the league’s leading rusher, Saquon Barkley, was the No. 2 overall pick of the Giants in 2018, and the Titans’ Derrick Henry was a second-round selection two years earlier.

But four of the top 12 running backs by yardage this season went in the fourth round or later, including the Dolphins’ Jeff Wilson, who wasn’t drafted at all.

The top two running backs taken in April, Breece Hall of the Jets and Kenneth Walker III of the Seahawks, were selected in the second round and have had dynamic debuts -- though Hall is lost to a season-ending knee injury.

But Pacheco has more yards rushing than 16 running backs that were drafted ahead of him this year.

“I said it all throughout camp, we’re pushing each other to be better,” McKinnon said, “and it’s something that’s continued forward, and I think it’s showing when that person gets their number called, they’ve risen to the occasion.”

Or bounced back from a mistake.

That was the case when Pacheco fumbled early in the Chiefs’ 27-17 win against Jacksonville. Rather than hang his head on the sideline, Pacheco vowed to make up for the gaffe.

And in a sign of how much Reid trusts him, the Chiefs went right back to Pacheco when they got another chance with the ball.

“It just showed me that I can be something in this offense,” Pacheco said. “I just have to continue to put in that work.”

Notes: WRs JuJu Smith-Schuster (concussion protocol) and Mecole Hardman (abdominal injury), along with WR Chris Lammons (concussion protocol), did not practice Thursday. … Chiefs special teams coach Dave Toub said Kadarius Toney will return punts going forward. “He has to do some things with reads, but that’s part of the learning experience,” Toub said. “He is going to get better, but he’s something with the ball in his hands.”