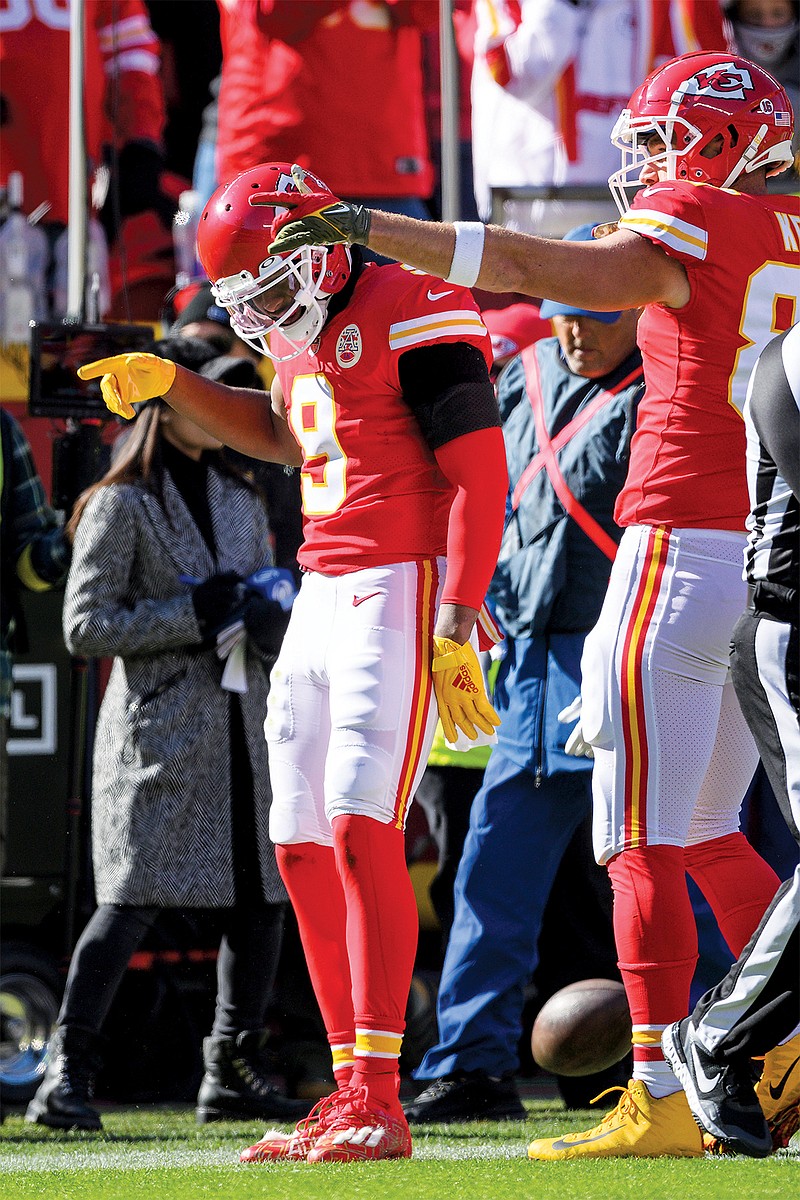 Chiefs wide receiver JuJu Smith-Schuster is joined by tight end Travis Kelce in celebrating a first down during Sunday’s game against the Jaguars at Arrowhead Stadium in Kansas City. (Associated Press)

KANSAS CITY -- Chiefs quarterback Patrick Mahomes was missing his top three wide receivers in practice Wednesday because of injuries and illness, and the situation might not be a whole lot better when Kansas City visits the Chargers this weekend.

JuJu Smith-Schuster remained in the concussion protocol after taking a helmet-to-helmet hit from Jacksonville safety Andre Cisco in last Sunday’s win against the Jaguars.

Smith-Schuster remained on the turf for several minutes before he was helped to his feet and off the field with help from teammates, and it’s unlikely he will be cleared to play any time soon.

The Chiefs were also missing Mecole Hardman, who missed the 27-17 win against the Jaguars with an abdominal injury, and Marquez Valdes-Scantling, who was dealing with an illness that popped up during the past couple of days.

“We just put guys in position to succeed. For me, it’s about executing the offense, finding the open guy, getting the ball out of my hands and letting them make plays,” Mahomes said. “We’ve seen these guys in big moments. Hopefully we get guys back later in the week, but if not, we’ll be ready to roll out there.”

Yet the trio of missing wide receivers were each in the midst of their best stretches this season.

Smith-Schuster had five catches for 113 yards and a touchdown against the Bills, seven for 124 and a score against the 49ers and 10 for 88 yards against the Titans.

And he had a couple of catches early on against Jacksonville before the pass across the middle set him up for Cisco, whose shoulder and helmet hit Smith-Schuster in the head.

“We’ll just take him day by day. We’ll be cautious with him,” said Chiefs coach Andy Reid, adding that he had not heard from the NFL about the hit. “We’re not going to do anything that you shouldn’t do according to what the data shows.”

Hardman, in the midst of a contract year, had scored in three straight games with five touchdowns total over that span before missing last week’s game against Jacksonville. He was targeted a season-high nine times against Tennessee.

Valdes-Scantling had three catches for 60 yards and his first TD with the Chiefs last Sunday.

Meanwhile, Moore has just seven catches for 106 yards. Watson has seven for 113 yards and two scores. And Toney has played 37 snaps total during his Kansas City career, though his performance against the Jaguars was encouraging.

Toney had four catches for 57 yards and his first NFL touchdown while adding 33 yards on the ground.

“I wasn’t surprised by him making the plays,” Mahomes said, “but us being able to move him around as much as we have. It’s a testament to him. He’s gotten in here, he’s learned multiple positions, we’ve moved him around -- he’s not in one spot.

Especially if the Chiefs are missing two or three of their other wide receivers.

Notes: DE Frank Clark returned to the team after serving his two-game suspension for violating NFL rules. … RT Andrew Wylie had positive results from an MRI on his sprained elbow. He practiced Wednesday with a brace and should be available Sunday. … The turf inside SoFi Stadium in Los Angeles has been in the crosshairs after a series of injuries with many players telling the NFL that games must be played on natural grass, though SoFi was not specifically mentioned by the NFLPA last weekend. Reid is in the same camp, saying: “I’ve listened to all the studies -- density studies. I’ve seen the different compounds they’ve put in there. I still like grass.”