Allen, Williams return to practice for Chargers ahead of game vs. Chiefs 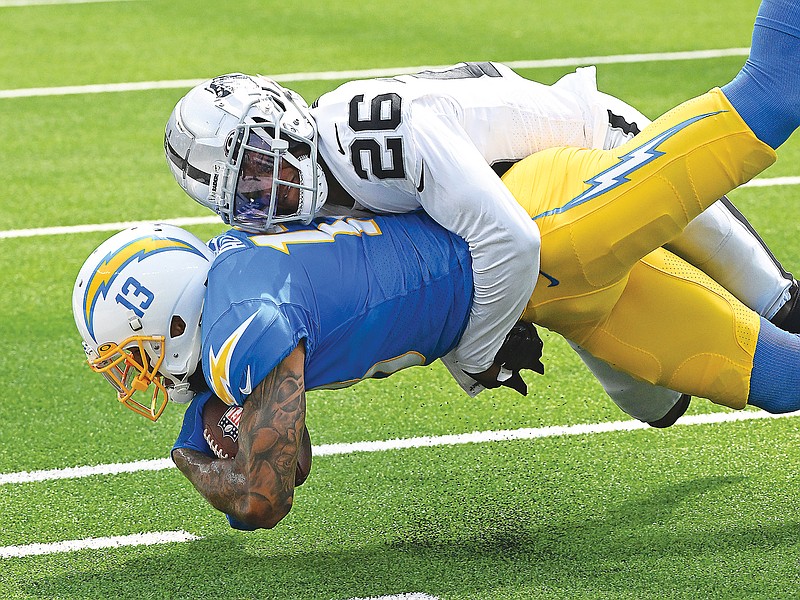 COSTA MESA, Calif. -- Brandon Staley was able to do something Wednesday he has rarely had a chance to do this season -- relay positive news about players returning from injury.

Los Angeles Chargers wide receivers Keenan Allen and Mike Williams were back on the practice field as the Bolts ramped up preparations for Sunday night’s pivotal home division game against the Kansas City Chiefs.

Allen and Williams participated in individual drills and could progress to team drills today.

“I’m hoping that it’s energizing as we, hopefully, can get some guys back. There has been a lot of subtraction. I’m looking forward to addition,” Staley said.

Williams -- who leads the team in receiving yards (495) and is tied for second in catches (37) -- sprained his right ankle in the fourth quarter of an Oct. 23 loss to the Seattle Seahawks.

Williams has frustrated the Chiefs throughout his six-year career. He has at least six receptions and gone for 100 yards three of the past four times he has faced Kansas City.

“The rest of the guys have stepped up with me and Keenan out, but it would be big for the offense if we could get back,” Williams said.

Allen strained his left hamstring during the first half of the Sept. 11 opener against the Las Vegas Raiders. He missed the next four games before seeing limited action against Seattle.

Allen experienced a setback during the bye week while running and has been out for the past two games.

“I’m just going out there and doing what I feel, trying to stay pushing forward and not going backward. I’ve had it happen two to three times already, so I kind of know what not to do,” said Allen about returning to practice.

Staley wasn’t ready to predict whether his top two receivers would be ready after being sidelined the past two games.

“I think we’re just going to build them up as we go and I think we’ll be able to tell you a lot more as the week goes on. Friday, I will probably have a lot better report,” Staley said.

It would come at the most opportune time if both could play.

The Chargers (5-4) are in postseason contention, but are two games behind Kansas City (7-2) in the AFC West.

A loss Sunday night would likely spell the end of the Chargers’ hopes of a division championship and leave their only route to the playoffs being a wild-card spot.

Without Allen and Williams, the Chargers passing attack has mostly relied on passes within 10 yards of the line of scrimmage.

Tight end Gerald Everett will work his way back into practice after suffering a groin injury in the first half.

The biggest position group that remains a concern is the defensive line.

With Christian Covington and Otito Ogbonnia placed on injured reserve, the Chargers signed Tyeler Davison off Cleveland’s practice squad. Joe Gaziano will be promoted off the practice squad for the game.

The Chargers, who dress five defensive linemen during games, were down to three during the fourth quarter against the 49ers.

“It’s all hands on deck,” defensive lineman Breiden Fehoko said. “It doesn’t matter what week it is, you have to execute. That’s how we’re going to approach this week.”