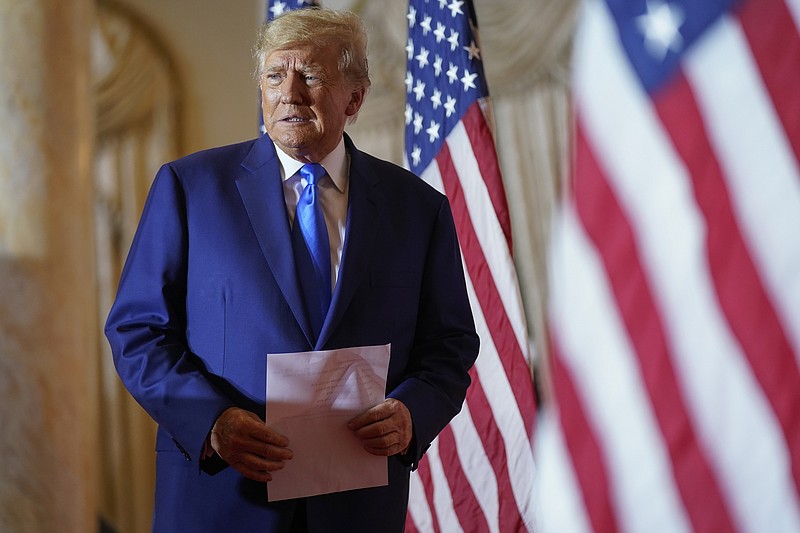 PALM BEACH, Fla. (AP) -- Former President Donald Trump said Tuesday he will mount a third White House campaign, launching an early start to the 2024 contest. The announcement comes just a week after an underwhelming midterm showing for Republicans and will force the party to decide whether to embrace a candidate whose refusal to accept defeat in 2020 pushed American democracy to the brink.

"I am tonight announcing my candidacy for president of the United States," Trump said to an audience of several hundred supporters, club members and gathered press in a chandeliered ballroom at his Mar-a-Lago club, where he stood flanked by more than 30 American flags and banners that read, "MAKE AMERICA GREAT AGAIN!"

Trump enters the race in a moment of political vulnerability. He hoped to launch his campaign in the wake of resounding GOP midterm victories, fueled by candidates he elevated during this year's primaries. Instead, many of those candidates lost, allowing Democrats to keep the Senate and leaving the GOP with a path to only a bare majority in the House.

Far from the undisputed leader of the party, Trump is now facing criticism from some of his own allies, who say it's time for Republicans to look to the future, with Florida Gov. Ron DeSantis emerging as an early favorite White House contender.

The former president is still popular with the GOP base. But other Republicans, including former Vice President Mike Pence, are taking increasingly public steps toward campaigns of their own, raising the prospect that Trump will have to navigate a competitive GOP primary.

He's launching his candidacy amid a series of escalating criminal investigations, including several that could lead to indictments. They include the probe into dozens of documents with classified markings that were seized by the FBI from Mar-a-Lago and ongoing state and federal inquiries into his efforts to overturn the results of the 2020 presidential election.

Another campaign is a remarkable turn for any former president, much less one who made history as the first to be impeached twice and whose term ended with his supporters violently storming the Capitol in a deadly bid to halt the peaceful transition of power on Jan. 6, 2021.

But Trump, according to people close to him, has been eager to return to politics and try to halt the rise of other potential challengers. Aides have spent the last months readying paperwork, identifying potential staff and sketching out the contours of a campaign that is being modeled on his 2016 operation, when a small clutch of aides zipping between rallies on his private jet defied the odds and defeated far better-funded and more experienced rivals by tapping into deep political fault lines and using shocking statements to drive relentless media attention.

Even after GOP losses, Trump remains the most powerful force in his party. For years he has consistently topped his fellow Republican contenders by wide margins in hypothetical head-to-head matchups. And even out of office, he consistently attracts thousands to his rallies and remains his party's most prolific fundraiser, raising hundreds of millions of dollars.

But Trump is also a deeply polarizing figure. Fifty-four percent of voters in last week's midterm elections viewed him very or somewhat unfavorably, according to AP VoteCast, a survey of more than 94,000 voters nationwide. And an October AP-NORC poll found even Republicans have their reservations about him remaining the party's standard-bearer, with 43 percent saying they don't want to see him run for president in 2024.

Trump's candidacy poses profound questions about America's democratic future. The final days of his presidency were consumed by a desperate effort to stay in power, undermining the centuries-old tradition of a peaceful transfer. And in the two years since he lost, Trump's persistent -- and baseless -- lies about widespread election fraud have eroded confidence in the nation's political process. By late January 2021, about two-thirds of Republicans said they did not believe President Joe Biden was legitimately elected in 2020, an AP-NORC poll found.

VoteCast showed roughly as many Republican voters in the midterm elections continued to hold that belief.

Federal and state election officials and Trump's own attorney general have said there is no credible evidence the 2020 election was tainted. The former president's allegations of fraud were also roundly rejected by numerous courts, including by judges Trump appointed.

But that didn't stop hundreds of midterm candidates from parroting his lies as they sought to win over his loyal base and score his coveted endorsement. In the end, many of those candidates went on to lose their races in a sign that voters rejected such extreme rhetoric.

While some Republicans with presidential ambitions, like former U.N. Ambassador Nikki Haley, have long ruled out running against Trump, others have said he would not figure into their decisions, even before his midterm losses.

They include Pence, who released a book Tuesday, and Trump's former secretary of state, Mike Pompeo, as well as former New Jersey Gov. Chris Christie, who ran against Trump in 2016. Other potential candidates include Texas Sen. Ted Cruz, South Carolina Sen. Tim Scott and Virginia Gov. Glenn Youngkin. Trump is also likely to face challenges from members of the anti-Trump wing of the party like Maryland Gov. Larry Hogan and Wyoming Rep. Liz Cheney, vice chair of the House committee that has been investigating Jan. 6.

But the person who has most occupied Trump and his allies in recent months is DeSantis, whose commanding reelection as governor last week was a bright spot for Republicans this cycle. The former congressman, who became a popular national figure among conservatives during the pandemic as he pushed back on COVID-19 restrictions, shares Trump's pugilistic instincts and has embraced fights over social issues with similar zeal.

Trump's decision paves the way for a potential rematch with Biden, who has said he intends to run for reelection despite concerns from some in his party over his age and low approval ratings. The two men were already the oldest presidential nominees ever when they ran in 2020. Trump, who is 76, would be 82 at the end of a second term in 2029. Biden, who is about to turn 80, would be 86.

If he is ultimately successful, Trump would be just the second U.S. president in history to serve two nonconsecutive terms, following Grover Cleveland's wins in 1884 and 1892.

But Trump enters the race facing enormous challenges beyond his party's growing trepidations. The former president is the subject of numerous investigations, including the monthslong probe into the hundreds of documents with classified markings found in boxes at Mar-a-Lago.

Meanwhile, Trump is facing Justice Department scrutiny over efforts to overturn the results of the 2020 presidential election. In Georgia, Fulton County District Attorney Fani Willis is investigating what she alleges was "a multi-state, coordinated plan by the Trump Campaign" to influence the 2020 results.

And in New York, Attorney General Letitia James has sued Trump, alleging his namesake company engaged in decades' worth of fraudulent bookkeeping by misleading banks about the value of his assets. The Trump Organization is also now on trial, facing criminal tax fraud charges. 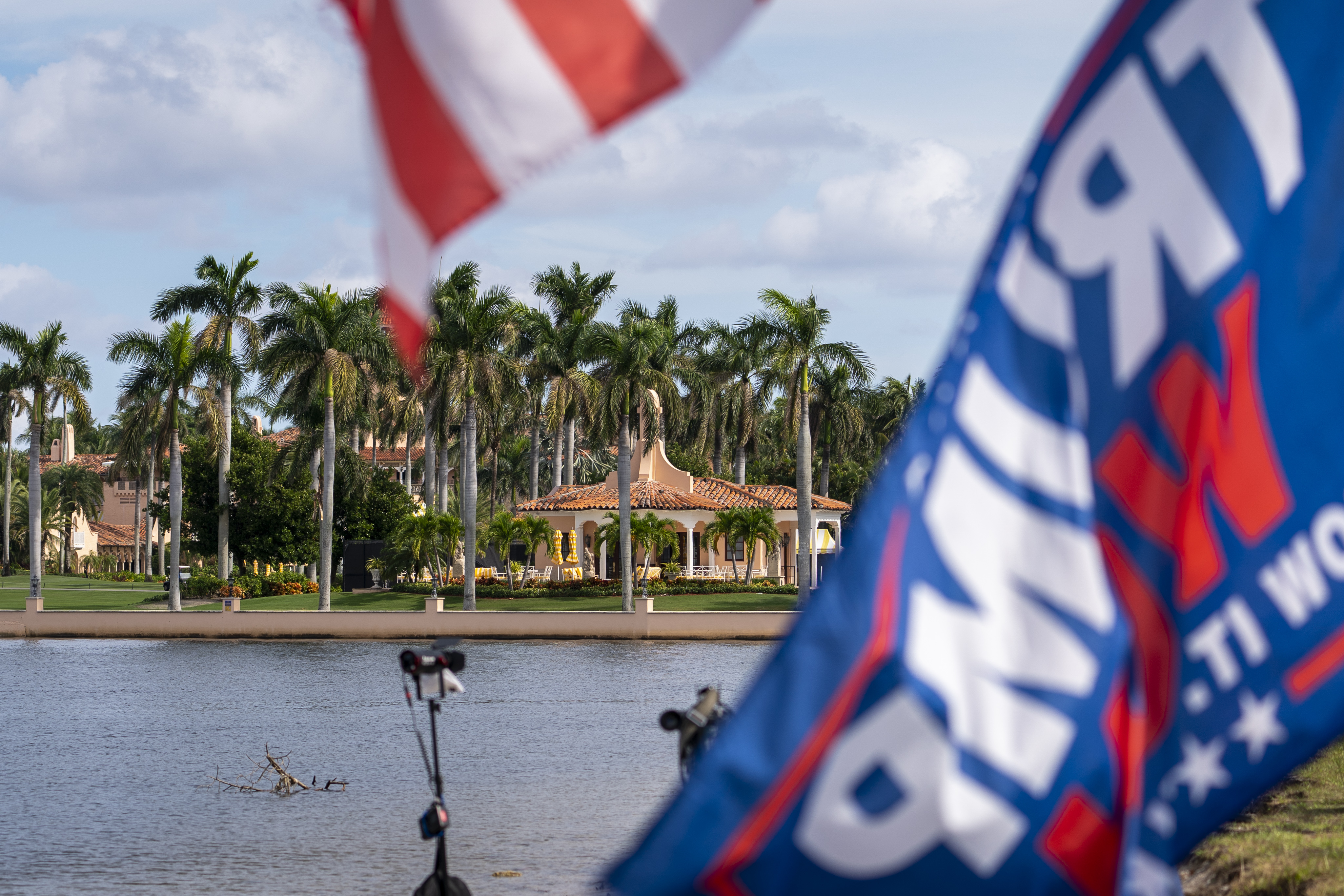 Flags in support of former President Donald Trump fly outside his Mar-a-lago resort, Tuesday, Nov. 15, 2022 in Palm Beach, Fla. Trump is preparing to launch his third campaign for the White House with an announcement Tuesday night. (AP Photo/Andrew Harnik) 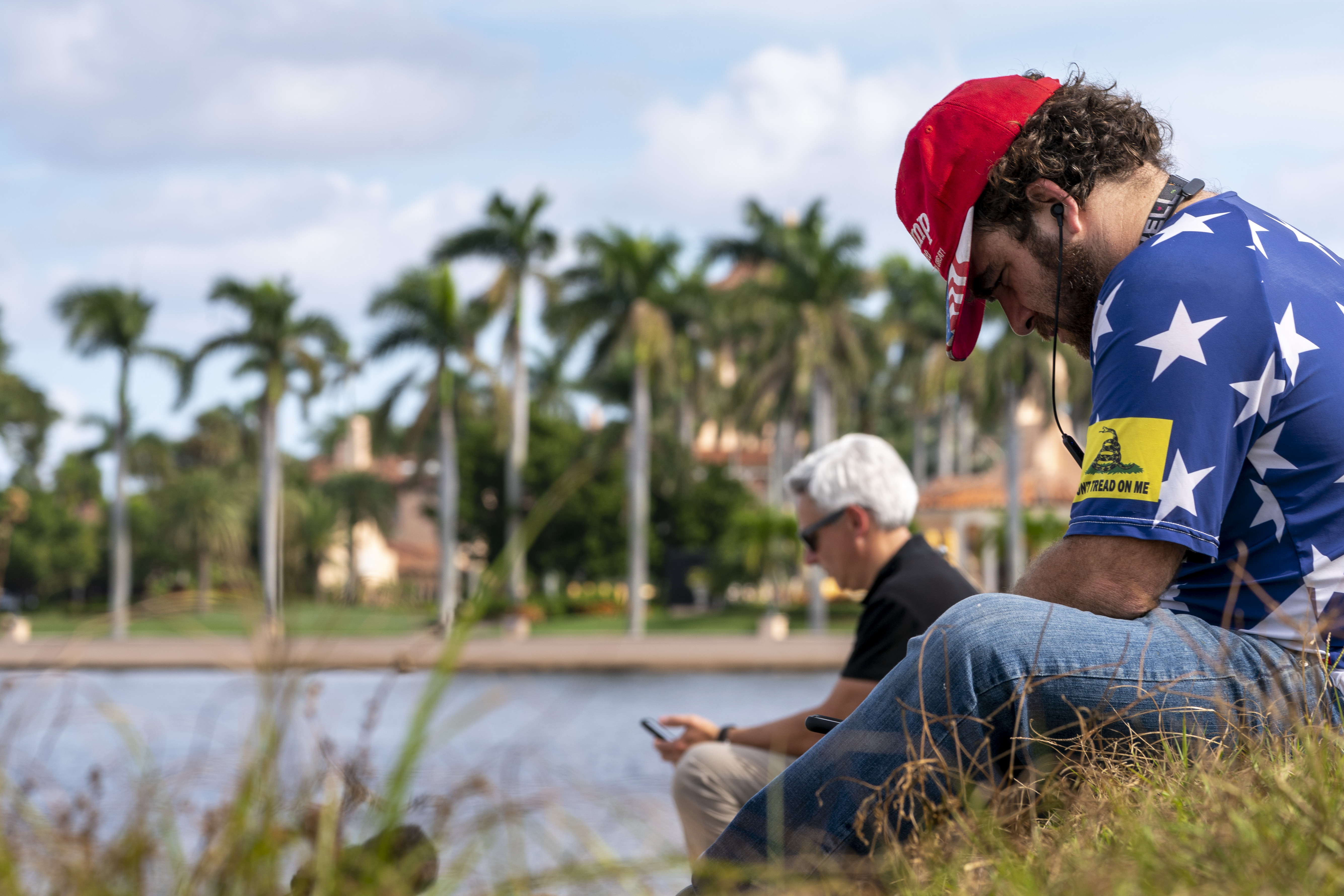 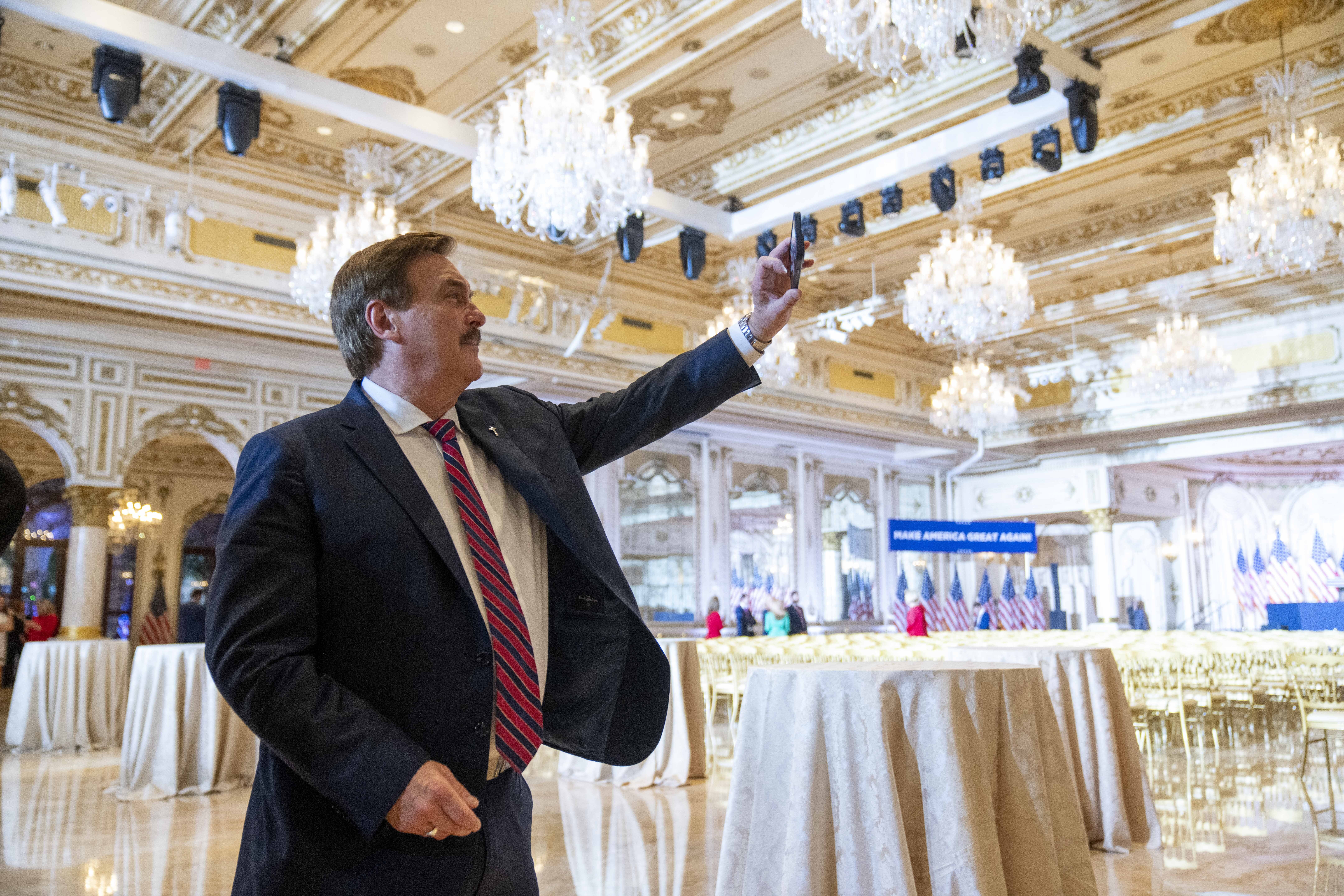 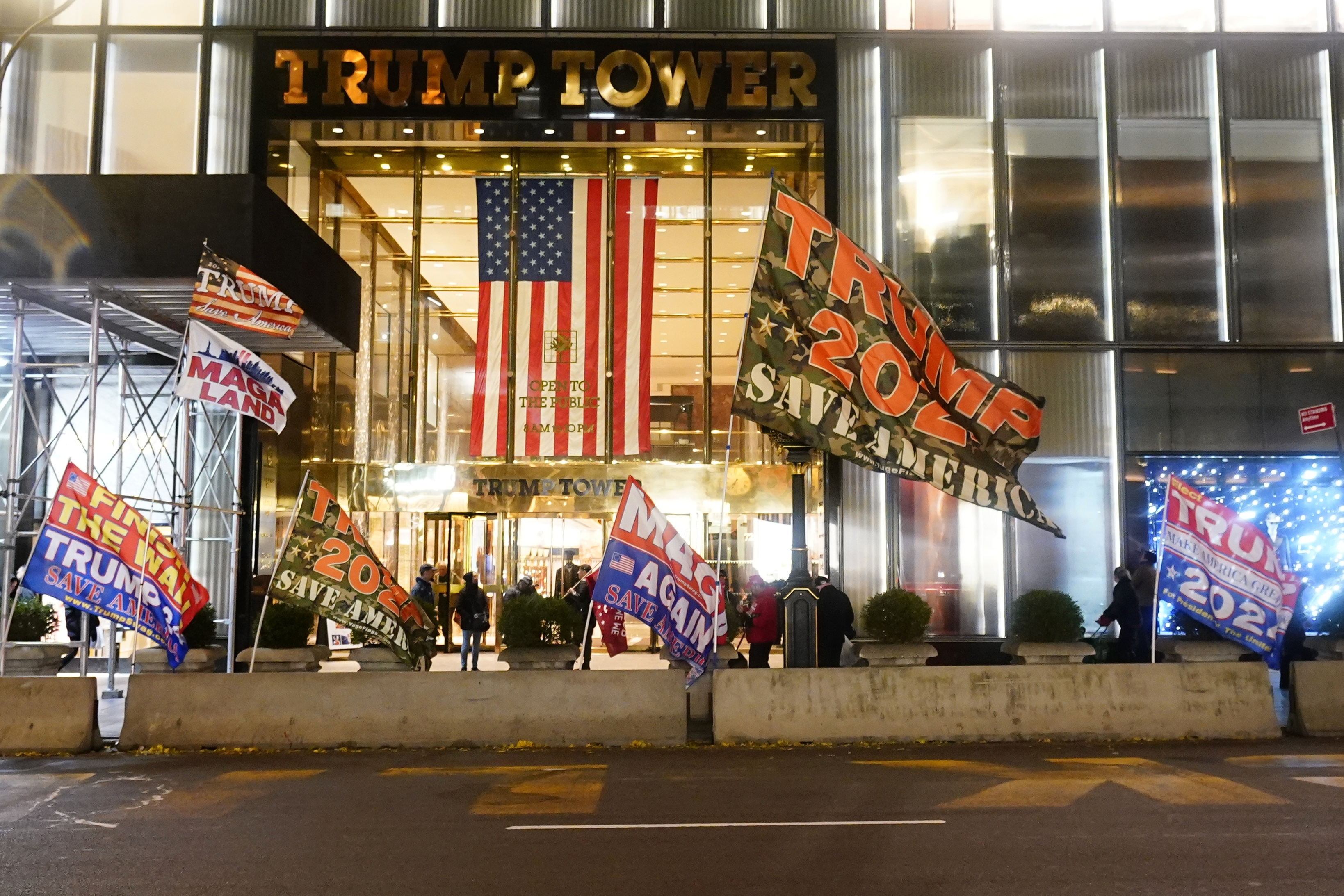 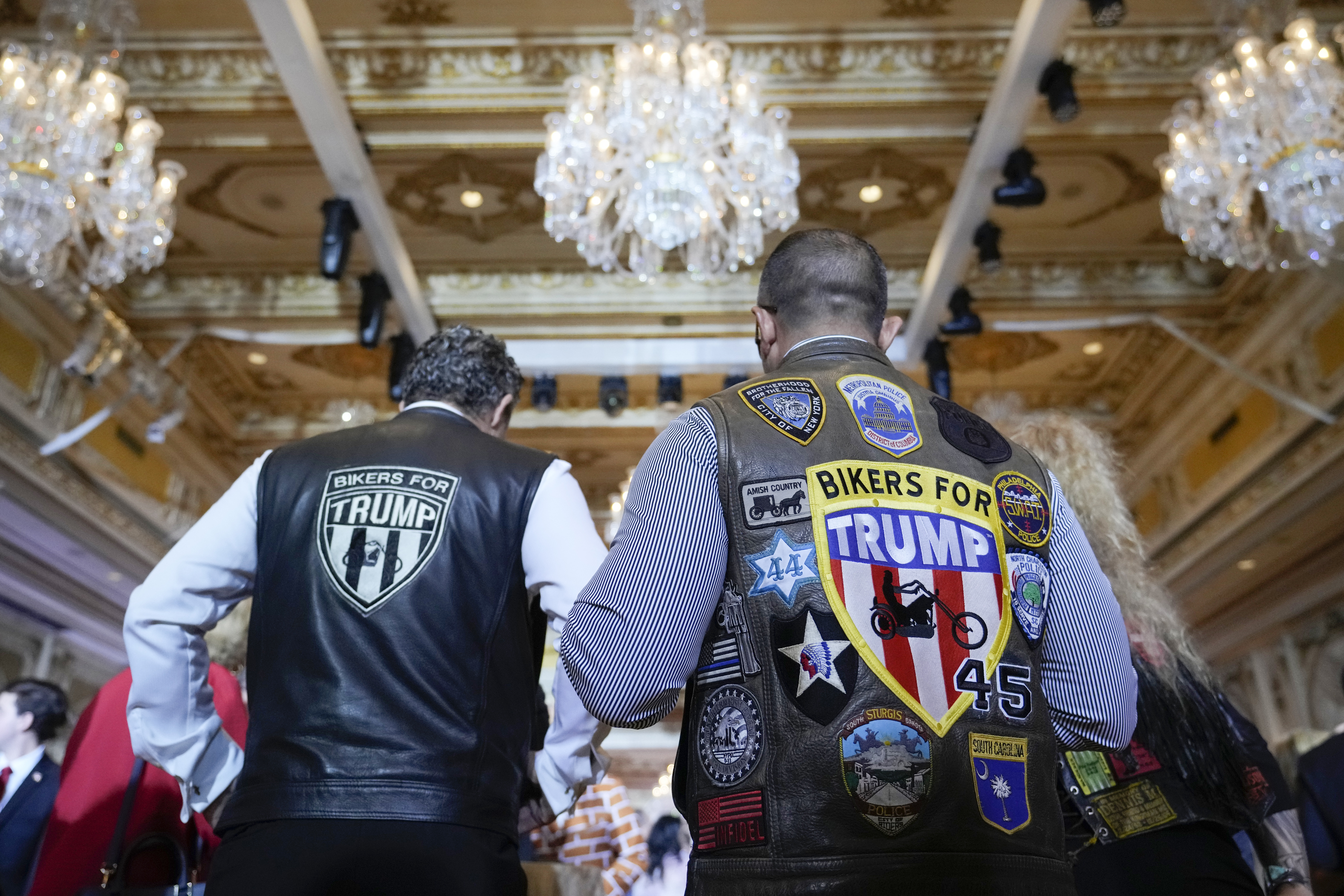 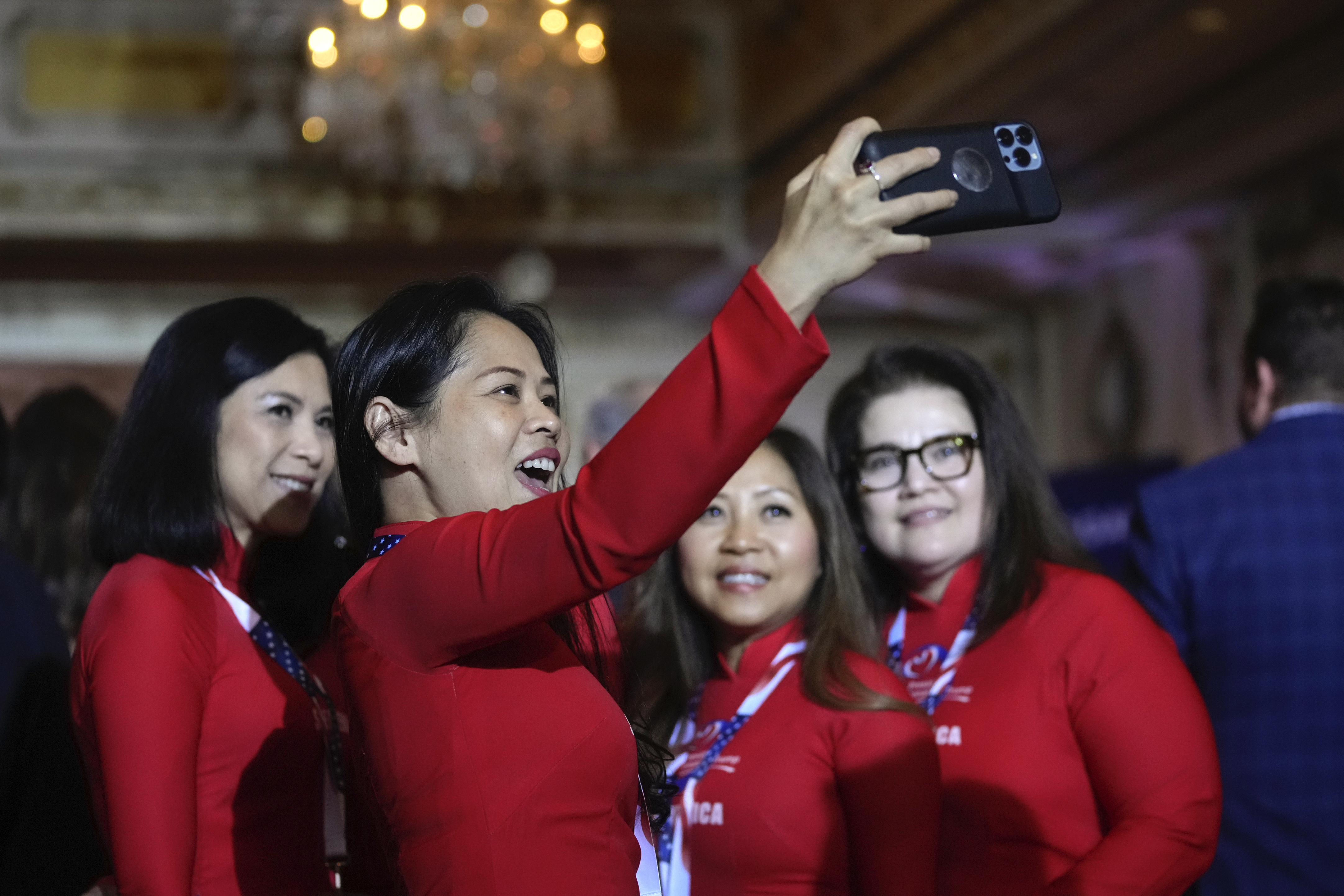