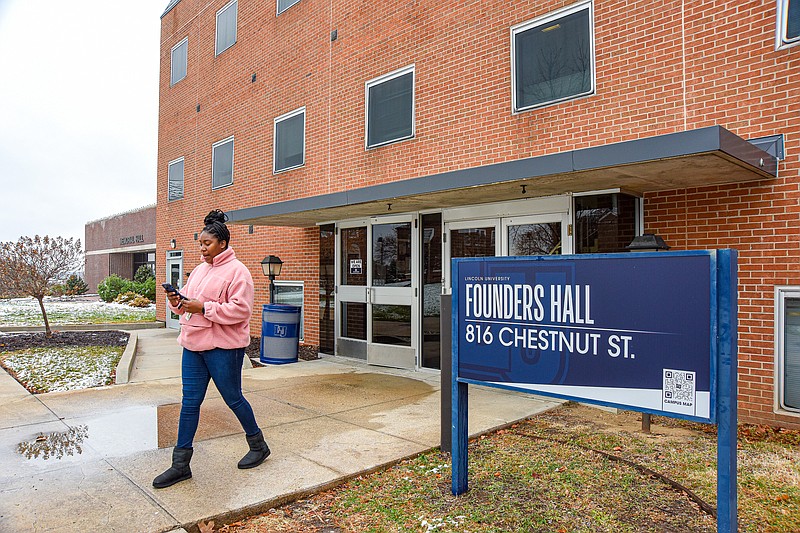 Julie Smith/News Tribune photo: Lincoln University senior Shanice Reid exits Founders Hall after class Tuesday, Nov. 15, 2022. The LU Board of Curators voted to change the name of the building to Dr. James Frank Hall, after the former president of the university.

The Lincoln University Board of Curators has renamed Founders Hall after a former president who was fired from the university in the 1980s.

The decision, finalized in September, moved at least one Jefferson City alumnus to file a complaint with the board. The board president, however, said its decision is final and the topic won't be revisited.

The Board of Curators renamed the building at a Sept. 28 meeting scheduled to discuss financing a residence hall renovation, approving the purchase of a new extension building and renaming campus facilities. The two facility renamings were discussed for just under three minutes.

In a nearly unanimous vote (one curator abstained), the board renamed Founders Hall "Dr. James Frank Hall" after James Frank, the first Lincoln alumnus to serve as university president. Frank died in 2019 at the age of 89. He served in the university's highest office for nine years before he was asked to resign by the university board of curators in 1982.

Board President Victor Pasley presented the renaming motion, noting Frank donated more than $300,000 to Lincoln during the course of his life and spearheaded the fundraising and construction of Memorial Hall.

Frank was also the first college president and first African American to serve as president of the National Collegiate Athletics Association. He's been recognized with several awards by the NCAA and has a conference room named after him at the organization's headquarters, Pasley said.

In his presentation to the other board members, Pasley did not mention a previous iteration of the board asking Frank to resign from his position.

In 1982, the Board of Curators asked Frank to resign from the presidency eight months before the end of his contract because it believed "a new leadership style is desirable," according to News Tribune archives. Frank didn't resign and was fired two days later.

Members of the board told the News Tribune at the time that Frank was difficult to work with because of the "high-handed manner in which he operated," while Frank said curators were interfering in the "internal matters of the school."

The curators pointed to issues such as when Frank asked the board to approve a five-year financial plan without giving members the opportunity to study it, when the university lost $25,000 on a concert under his leadership, and when he canceled News Tribune subscription services the area chamber of commerce had gifted to board members without notifying them.

Frank said his record and achievements, including the university's improved academic and financial conditions, spoke for themselves.

Lincoln doesn't have Board of Curator meeting minutes from 1982, university archivist Mark Schleer said, but reporting from the student newspaper, The Clarion, is consistent with that of the News Tribune.

Frank was asked to resign by the board, refused and was fired a couple days later.

"Basically, the reason that they said they let him go is they were looking for a new direction," Schleer said, adding that some of the reasoning was vague.

One Jefferson City alumnus is questioning the motive behind renaming Founders Hall after Frank and filed a complaint to the board.

Randy Halsey, who graduated from Lincoln with education degrees in 1955 and 1974, said he filed the complaint because he doesn't think the board acted appropriately in removing the founders' name from a campus building. He said he doesn't understand why it was a priority of the board.

"They ought to rescind it or give thought to what they're trying to do," he said. "It's not right."

"If we allow people to shut their eyes on the history and the legacy of Lincoln, the state should stop funding the university because it's lost its purpose," he continued.

Halsey, a former Lincoln professor and assistant to the president, said the board has more important university functions to consider than renaming buildings. He said the board president should have better informed other curators about Frank's firing when he proposed the renaming.

Pasley used faculty letters of recommendation to support the renaming of Founders Hall after Frank, Halsey said, but they were from four years ago.

"It was unfortunate that he didn't give the curators more information on why he wanted to do this before they voted," he said.

Halsey said curators told him the board would discuss the renaming of Founders Hall at its Nov. 10 meeting as a facility renaming was on the agenda.

And it has no plans to reconsider the Founders Hall name change, Pasley said. The board president declined to discuss the decision further while on the record.

Other curators currently on the board referred questions to Pasley.

Before referring to Pasley, Curator Everidge Cade said he had heard some "hubbub" about the renaming but he didn't understand it. Frank was strong in his convictions, he said, but he can't speak for what happened 40 years ago.

Earl Wheatfall, a Lincoln alum and former administrator who sued the university in 2020 over employment discrimination, said he's not upset at the board, but doesn't understand the decision to remove the founders from a building name.

Lincoln was founded by two regiments of emancipated Black soldiers who served in the Civil War and learned to read and write in boot camp. The two regiments pooled together $6,400 to create an institution that would educate other freed Black people.

The "Founders Hall" name is a tool that can be used to educate students about the institution's history, Wheatfall said. It works in conjunction with the monument at the center of campus, he added.

"What those soldiers were able to do at that time, especially when we were coming out of slavery, that was remarkable," Wheatfall said. "... I think the founders deserve that respect."