Giving back to the community: New Christmas lights display coming to Jefferson City 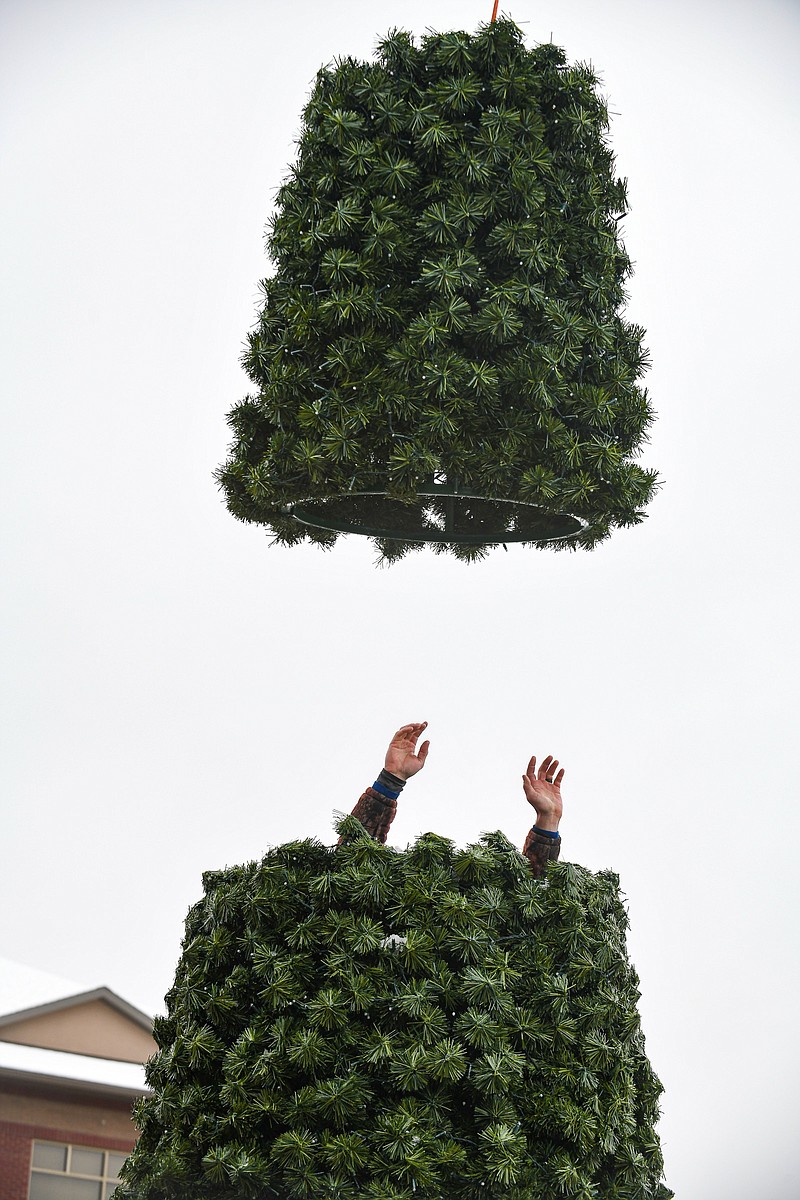 Julie Smith/News Tribune photo: Adam Perkins reaches up with both hands to guide the second last piece of the tree to the top of the existing sections Tuesday while working at River Region Credit Union building Christmas lighting displays. River Region on West Edgewood Drive will be offering a drive-through lighting display, free of charge, for the public.

It's beginning to look a lot like Christmas in Jefferson City.

The mid-November dusting of snow helped, but so did work on a new holiday display being erected near a Capital City credit union.

The display, currently under construction, is set to open Nov. 24, and will run every week, Thursday through Sunday, until New Year's Day. The aim of the display is to give back to the community whether through smiles or, more specifically, through donations made to five nonprofit Jefferson City-based organizations each time a car passes through the tunnel.

Louie Delk, chief member experience officer at River Region, reiterated it's all about giving back this holiday season.

"You know, a bunch of us here at the credit union, we really enjoy the Christmas season," Delk said. "We like getting out with our families and our friends, and going to see lights. And so we thought it would be fun if we could give a little something back to the community and try to put up a light display that's a little bit bigger, maybe a little bit better, and certainly a little bit different from anything else you might see in the Jefferson City area."

The complete setup will consist of five Christmas trees, including the 32-footer, along with two 20-footers and two 12-footers. The 32-footer will measure 20 feet in diameter at the base and will have 24,000 bulbs on it. It will also include computer-driven animation, according to Delk.

"We think it will be a really impactful site when we're all done," he said. "It should be pretty neat to drive through and experience."

For Mike West, chief executive officer of WestCo Grounds Maintenance, this display is the biggest project his company has worked on to date.

WestCo Grounds Maintenance, a Jefferson City-based company operating since 2010, was chosen for the project for exactly this reason.

"They asked several different local contractors to provide this service, and we were chosen mainly because of our experience and our size to be able to handle a project like this," West said.

And it's all being done with the holiday spirit in mind, focusing on Jefferson City residents and the community at large.

"It just puts a smile on my face that we can not only help out the credit union, but again, we can help put smiles on other people's faces in the community," West said. 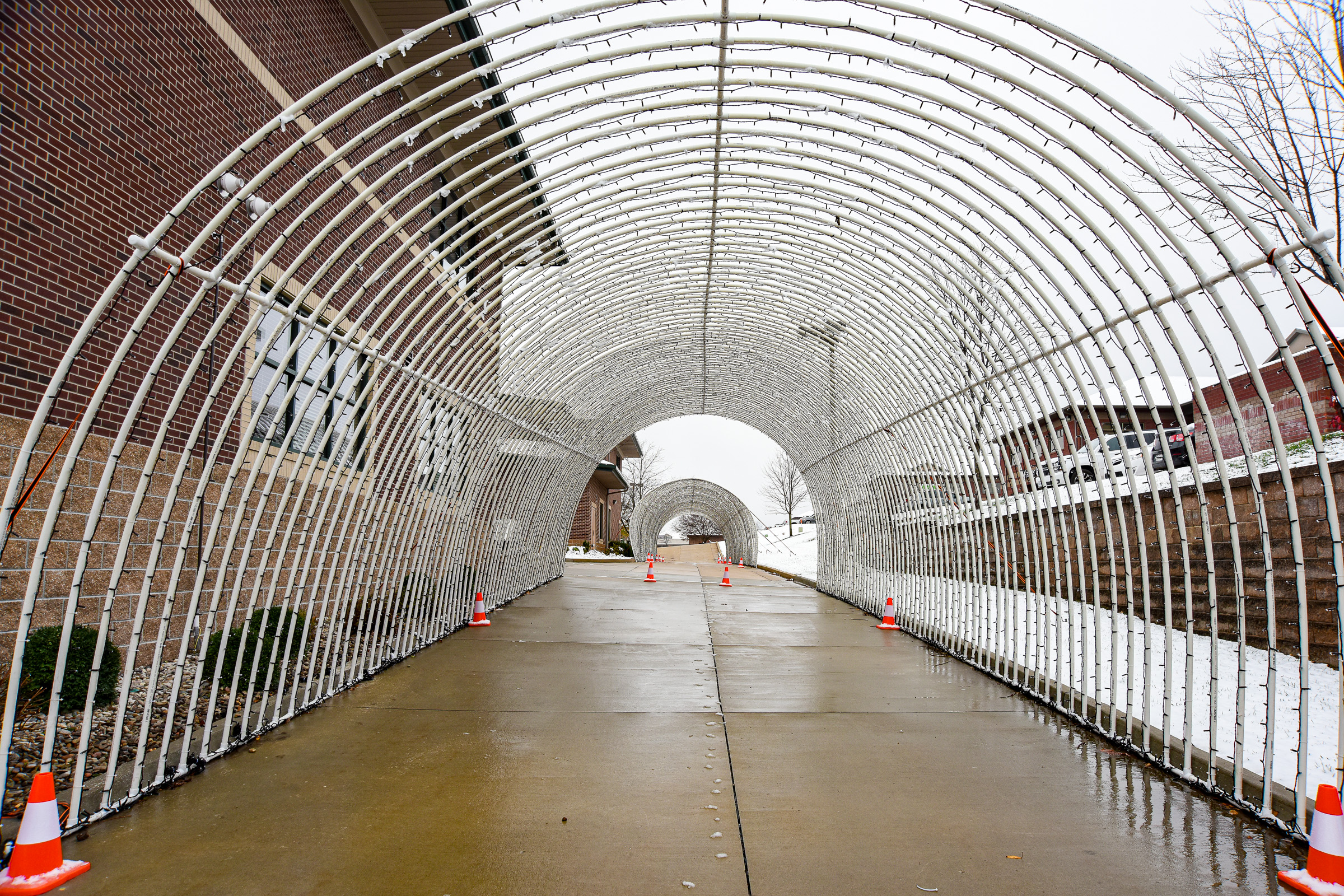 Julie Smith/News Tribune Using nearly 5,600 feet of PVC pipe and numerous connectors, two temporary archways have been constructed around the back of River Region Credit Union. The public will be able to drive through the lighted tunnels beginning Thanksgiving and continuing for six weeks on Thursdays through Sundays. 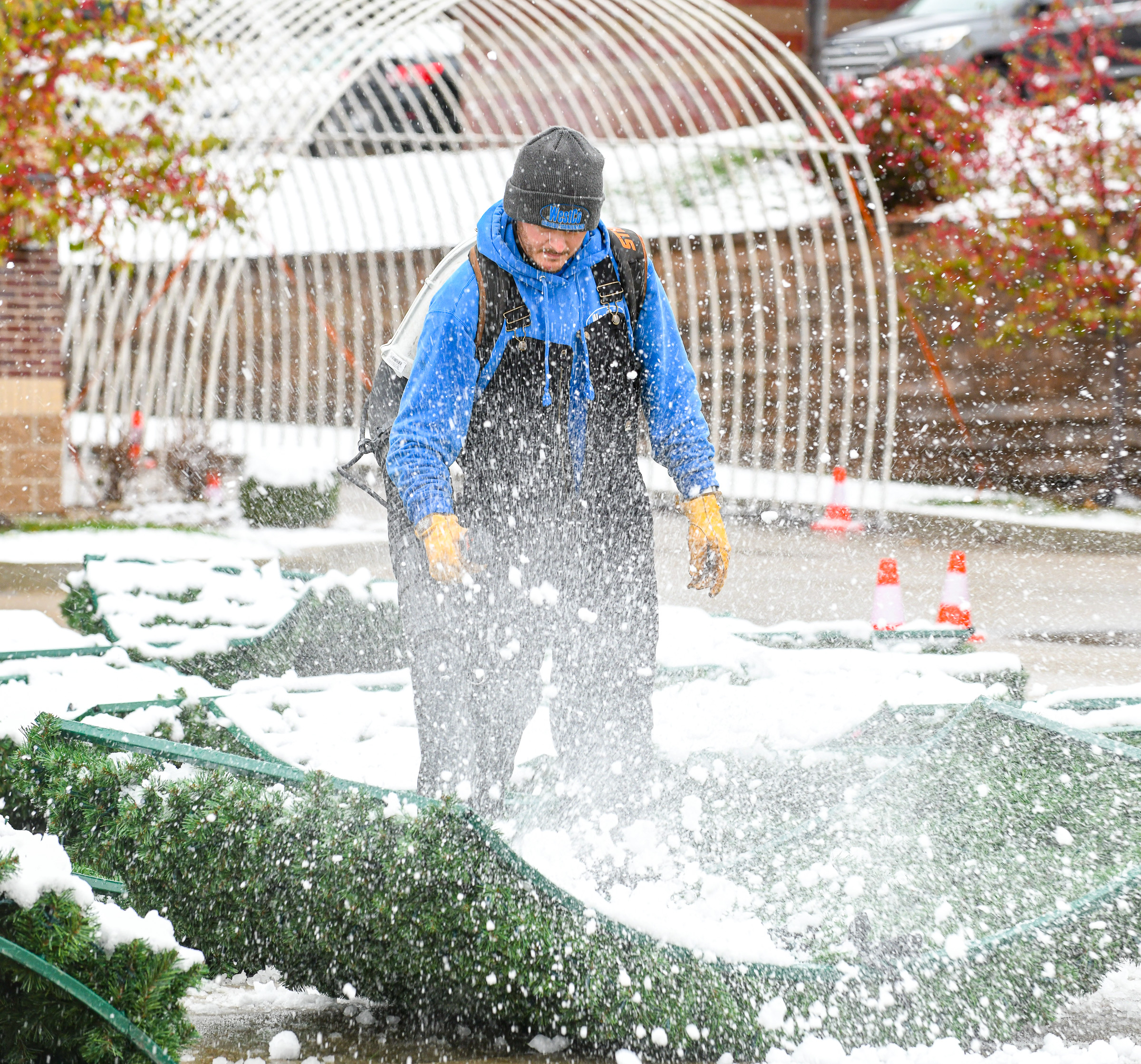 Julie Smith/News Tribune Lance New uses a gas powered blower Tuesday to remove the wet snow from the pieces of the Christmas tree that will be put up in the parking lot of River Region Credit Union on W. Edgewood Drive. The manufactured tree will stand 32 feet in height and be 20 feet in diameter at the base and will contain nearly 24,000 lights. River Region is going all out this year to have illuminated trees all around the property and have two sections of a lighted tunnel around the back of the building, seen in background here. New works for WestCo, the project's contractor and supplier. 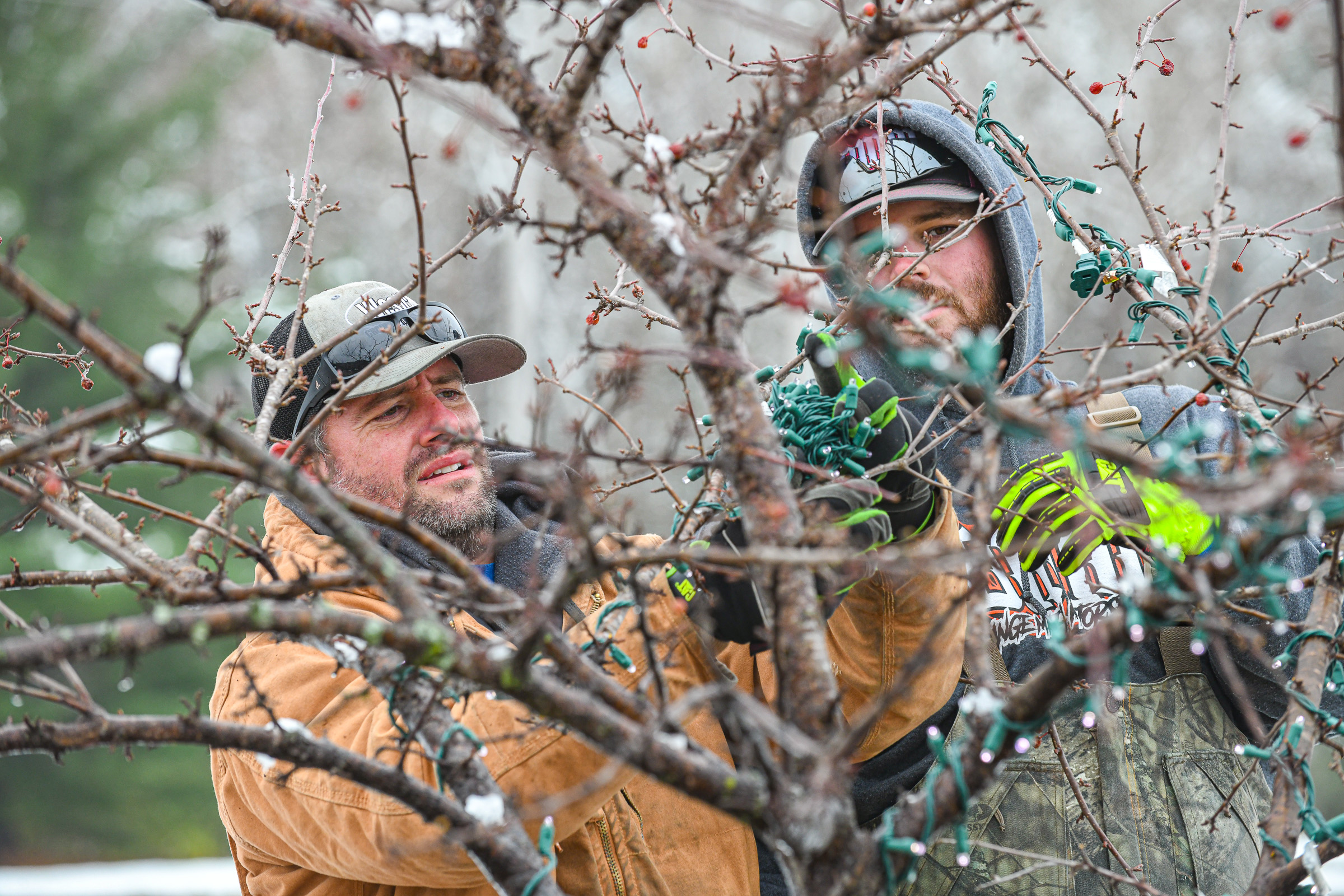 Julie Smith/News Tribune Cale Larkin, left, and Peyton Keathley wrap limbs with LED lights Tuesday while decorating the grounds at River Region Credit Union on W. Edgewood Drive. The duo work for WestCo which was contracted to design and install several lighted Christmas trees, a tunnel of lights and to wrap the building in lights. The public will be invited to view and drive through the display, free of charge. 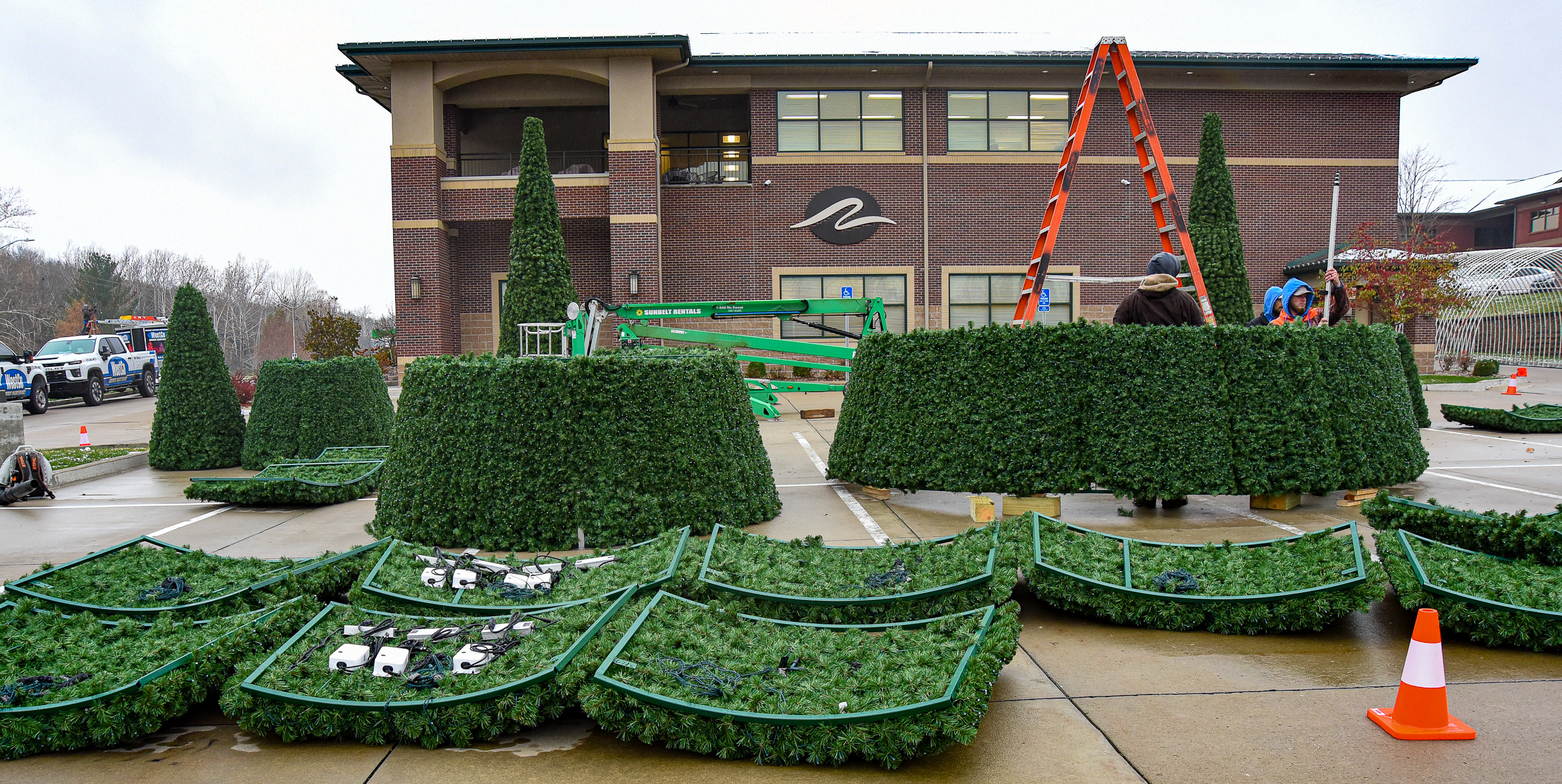 Julie Smith/News Tribune Michael Bryant, left, and Rob Johnson of Siteone Landscape Supply, help with the assembly of a 32-foot Christmas tree made up of steel frame sections and pieced together. They were helping with products they sold to WestCo, a complete landscaping company in Jefferson City, who has the contract to set up the trees at River Region Credit Union located at the intersection of W. Edgewood Drive and Diamond Ridge, which will host a drive-thru light display. 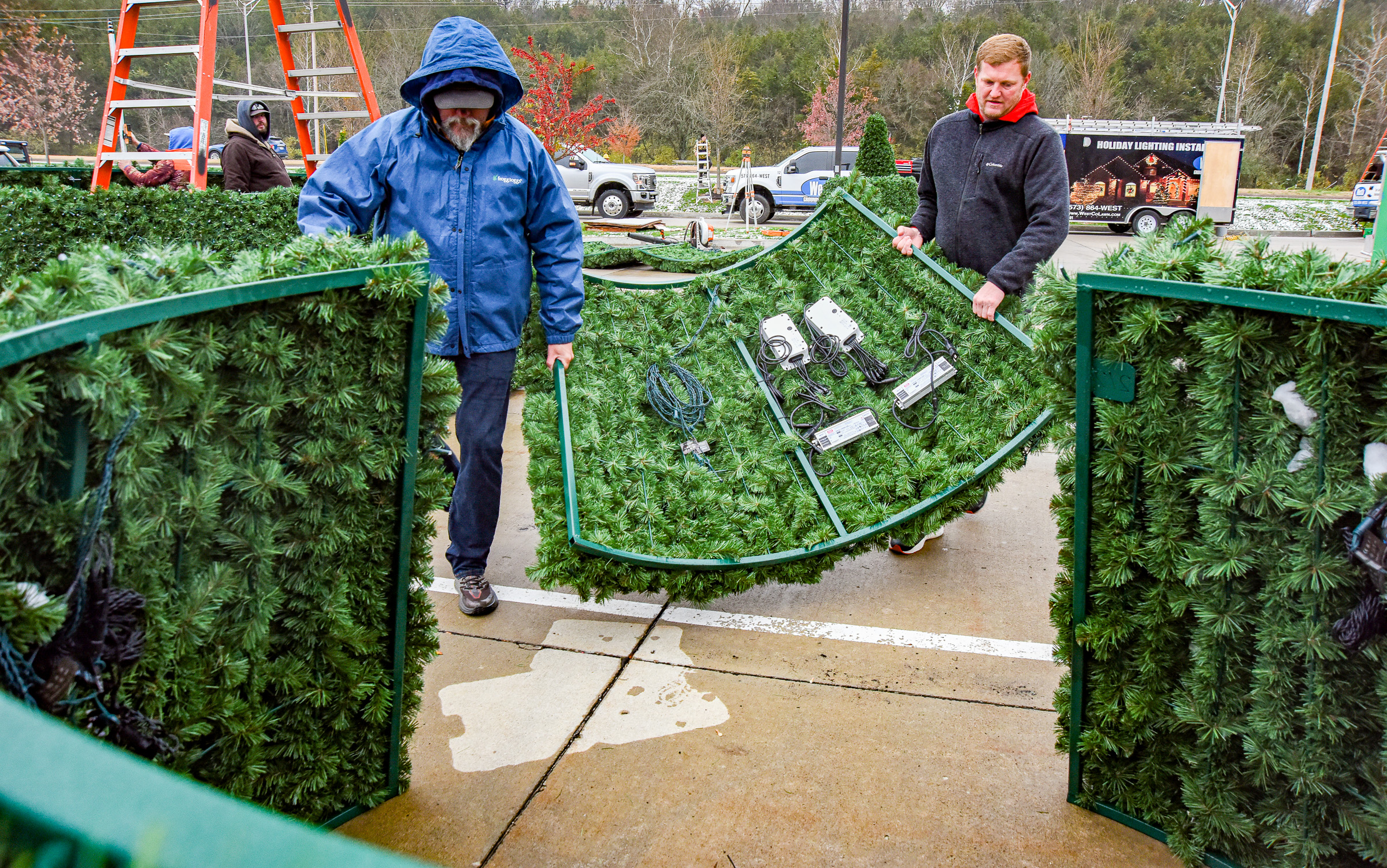 Julie Smith/News Tribune Rob Johnson, left, and Michael Bryant of Siteone Landscape Supply, help with the assembly of a 32-foot Christmas tree made up of steel frame sections and pieced together. They were helping with products they sold to WestCo, a complete landscaping company in Jefferson City, who has the contract to set up the trees at River Region Credit Union located at the intersection of W. Edgewood Drive and Diamond Ridge, which will host a drive-thru light display. 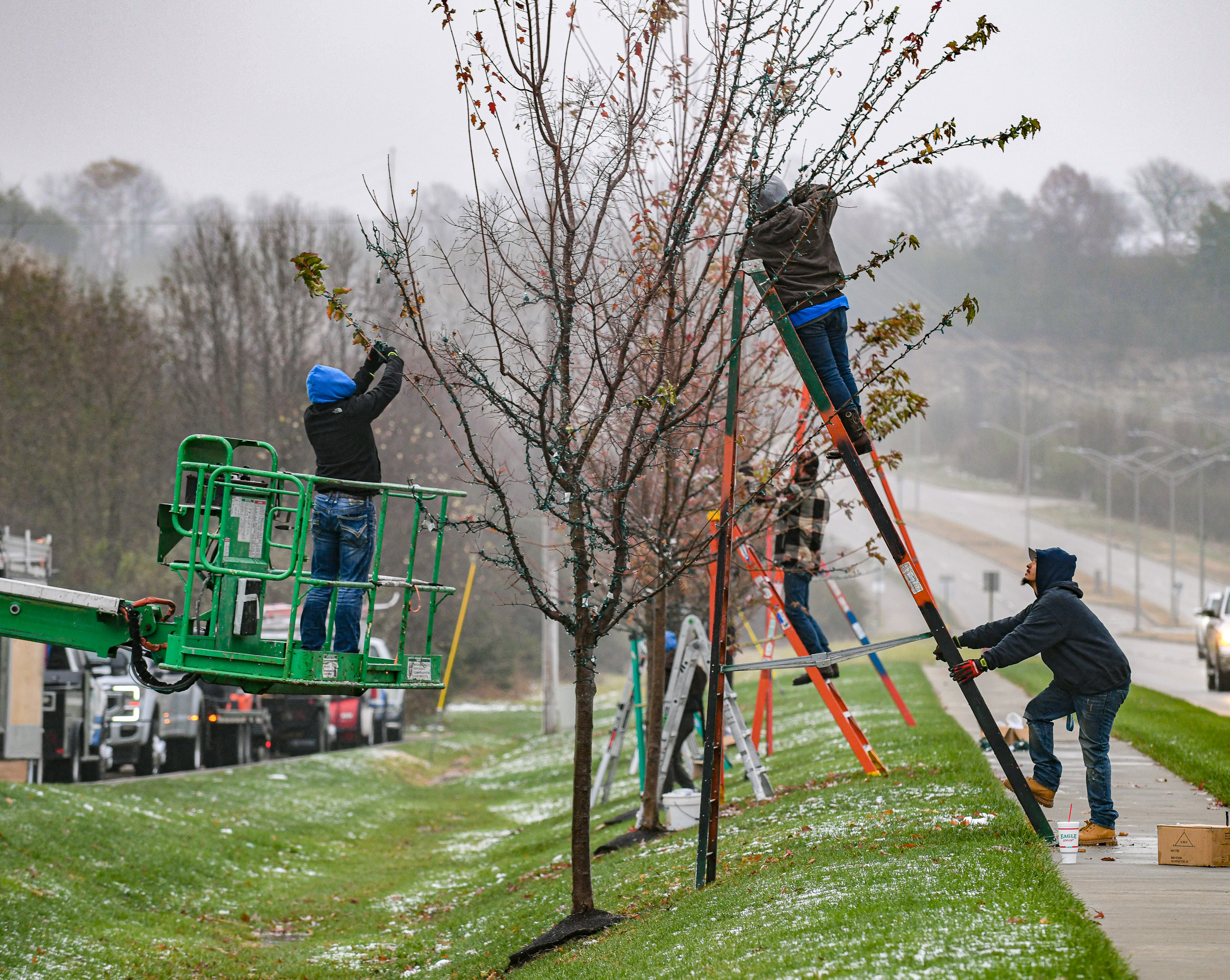