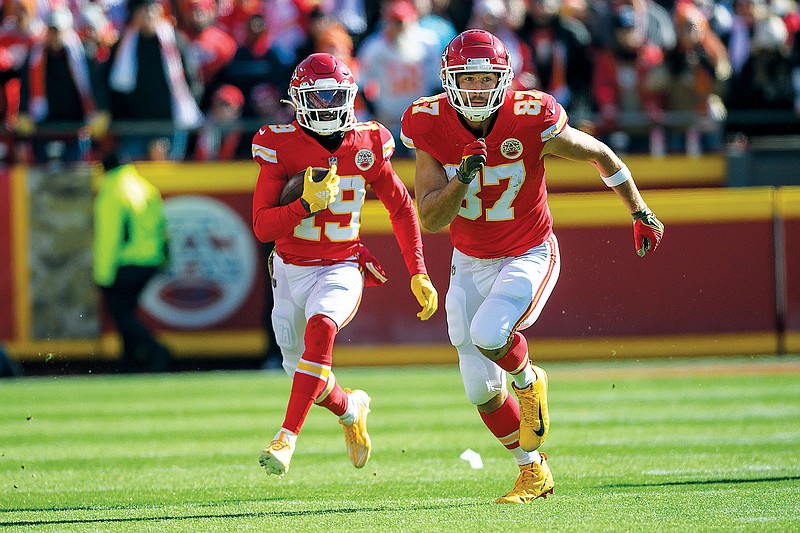 KANSAS CITY -- Of all the things Kansas City Chiefs coach Andy Reid appreciates about Brett Veach, tops on the list might be this: The general manager is never content, constantly searching for ways to add depth and improve the roster.

It’s precisely that trait that might help the Chiefs navigate what could be a difficult stretch for their offense.

They were already missing Mecole Hardman to an abdominal injury Sunday, when the Jaguars showed up at Arrowhead Stadium. Then they lost JuJu Smith-Schuster to a vicious helmet-to-helmet blow from Jacksonville safety Andre Cisco. And in a span of days, they were left without two of their best wide receivers for what could be a while.

But before all that happened, back when it appeared the Chiefs had plenty of talent surrounding Patrick Mahomes, Veach made a trade with the Giants for wide receiver Kadarius Toney. The 2021 first-round pick flamed out in New York, unable to stay healthy or make an impact when he was on the field, but was getting a fresh chance in Kansas City.

In just his second game Sunday, he ran for 33 yards, caught four passes for 57 yards and scored his first NFL touchdown.

The Chiefs fully expect Hardman and Smith-Schuster to return at some point; the former could be back Sunday night, when they visit the Los Angeles Chargers. But in the meantime, Toney is ready to step into their void with his new team.

Here are news and notes from Sunday:

• What’s working: The Chiefs had 31 sacks last season, the fourth-worst total in the NFL. They already have 27 this season, just five off the league lead. That includes five of Jacksonville’s Trevor Lawrence on Sunday.

• What needs help: The shine is starting to rub off special teams coordinator Dave Toub, who not long ago was interviewing for head coaching jobs. The Chiefs allowed the Jaguars to recover an onside kick to begin the game, Jody Forston fumbled a kickoff return near the end of the first half and struggling kicker Harrison Butker missed another extra point.

• Stock up: Carlos Dunlap shared a sack Sunday with Chris Jones, making him the 41st player to reach 100 for his career since sacks became an official stat in 1982. He’s had two sacks in his past two games and four on the season.

“Being able to get that accomplished is a huge milestone and accomplishment,” Dunlap said. “That was a goal, playing 10-plus years, getting 100-plus sacks to be in that elite category of the guys who have ever done it. So to get that done today and to share it with a guy who has potential to be up there as well (in Jones) was a very special moment.”

• Stock down: Clyde Edwards-Helaire, a first-round pick in 2020, did not have a carry Sunday as the Chiefs turn toward rookie Isiah Pacheco as their feature running back. Edwards-Helaire has just 28 carries for 85 yards over the past four games.

• Injuries: Smith-Schuster’s injury made the most headlines, but the Chiefs also lost right tackle Andrew Wylie to a sprained elbow and special teams ace Chris Lammons to the concussion protocol.

• Key number: 0 -- The Chiefs did not have a penalty Sunday for the fourth time in franchise history, and the first time since facing the Raiders on Dec. 1, 2019. The other games were against the Bills in 1966 and the Raiders in 1974.

• Next steps: The Chiefs visit the Chargers on Sunday night in a game that was flexed from its scheduled afternoon kickoff. Kansas City could take a three-game lead in the AFC West by sweeping the season series from Los Angeles.