Mindfulness worked as well as drug for anxiety in study 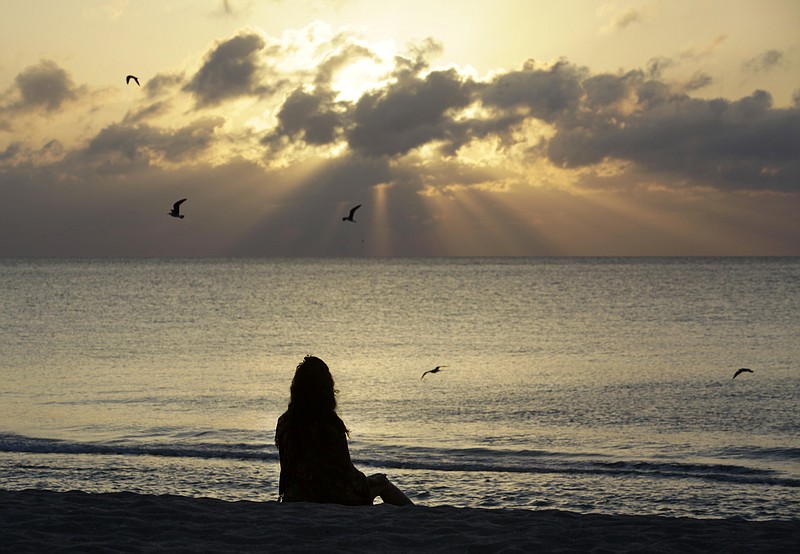 FILE - A woman meditates on the beach in Miami Beach, Fla., on Wednesday, April 28, 2010. According to a study published Wednesday, Nov. 9, 2022 in the journal JAMA Psychiatry, mindfulness meditation worked as well as a standard drug for treating anxiety in the first head-to-head comparison. (AP Photo/Lynne Sladky, File)

Mindfulness meditation worked as well as a standard drug for treating anxiety in the first head-to-head comparison.

The study tested a widely used mindfulness program that includes 21/2 hours of classes weekly and 45 minutes of daily practice at home. Participants were randomly assigned to the program or daily use of a generic drug sold under the brand name Lexapro for depression and anxiety.

After two months, anxiety as measured on a severity scale declined by about 30 percent in both groups and continued to decrease during the following four months.

Anxiety disorders include social anxiety, generalized anxiety and panic attacks. Affected people are troubled by persistent and intrusive worries that interfere with their lives and relationships. In the U.S., anxiety disorders affect 40 percent of U.S. women at some point in their lives and more than one in four men, according to data cited in U.S. Preventive Services Task Force screening recommendations.

Mindfulness is a form of meditation that emphasizes focusing only on what's happening at the moment and dismissing intrusive thoughts. Sessions often start with breathing exercises. Next might be "body scans" -- thinking about each body part systematically, head to toe. When worried thoughts intrude, participants learn to briefly acknowledge them but then dismiss them.

Instead of ruminating over the troubling thought, "you say, 'I'm having this thought, let that go for now,"' said lead author Elizabeth Hoge, director of Georgetown University's Anxiety Disorders Research Program. With practice, "It changes the relationship people have with their own thoughts when not meditating."

Previous studies have shown mindfulness works better than no treatment or at least as well as education or more formal behavior therapy in reducing anxiety, depression and other mental woes. But this is the first study to test it against a psychiatric drug, Hoge said, and the results could make insurers more likely to cover costs, which can run $300 to $500 for an 8-week session.

The results were based on about 200 adults who completed the six-month study at medical centers in Washington, Boston and New York. Researchers used a psychiatric scale of one to seven, with the top number reflecting severe anxiety. The average score was about 4.5 for participants before starting treatment. It dropped to about 3 after two months, then dipped slightly in both groups at three months and six months. Hoge said the change was clinically meaningful, resulting in noticeable improvement in symptoms.

Ten patients on the drug dropped out because of troublesome side effects possibly related to treatment, which included insomnia, nausea and fatigue. There were no dropouts for that reason in the mindfulness group, although 13 patients reported increased anxiety.

The study "is reaffirming about how useful mindfulness can be when practiced effectively," said psychologist Sheehan Fisher, an associate professor at Northwestern University's Feinberg School of Medicine who was not involved in the study.

He noted that many people feel they don't have time for mindfulness meditation, especially in-person sessions like those studied. Whether similar results would be found with online training or phone apps is unknown, said Krakower, who also had no role in the study.

Olga Cannistraro, a freelance writer in Keene, New Hampshire, participated in an earlier mindfulness study led by Hoge and says it taught her "to intervene in my own state of mind."

During a session, just acknowledging that she was feeling tension anywhere in her body helped calm her, she said.

Cannistraro, 52, has generalized anxiety disorder and has never taken medication for it. She was a single mom working in sales during that earlier study -- circumstances that made life particularly stressful, she said. She has since married, switched jobs, and feels less anxious though still uses mindfulness techniques.

Print Headline: Mindfulness worked as well as drug for anxiety in study