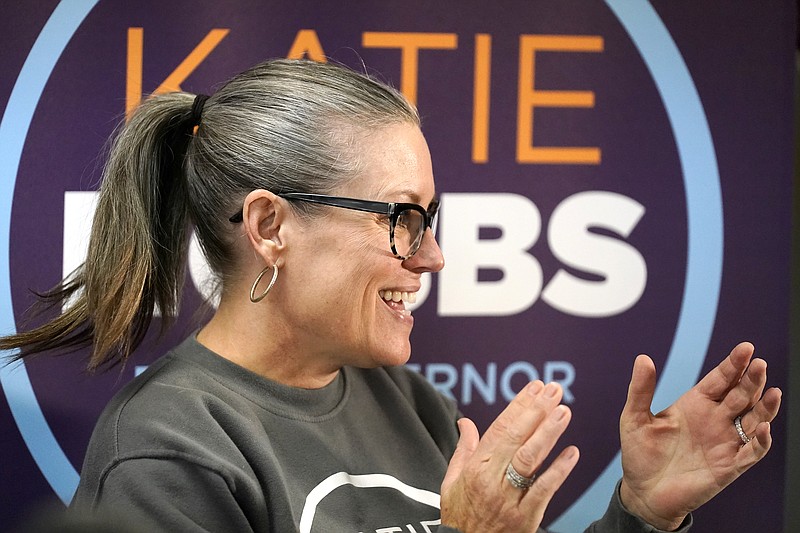 PHOENIX (AP) -- Democrat Katie Hobbs was elected Arizona governor Monday, defeating an ally of Donald Trump who falsely claimed the 2020 election was rigged and refused to say she would accept the results of her race this year.

Hobbs, who is Arizona's secretary of state, rose to prominence as a staunch defender of the legitimacy of the last election and warned her Republican rival, former television news anchor Kari Lake, would be an agent of chaos. Hobbs' victory adds further evidence that Trump is weighing down his allies in a crucial battleground state as the former president gears up for an announcement of a 2024 presidential run.

She will succeed Republican Gov. Doug Ducey, who was prohibited by term limit laws from running again. She's the first Democrat to be elected governor in Arizona since Janet Napolitano in 2006.

A onetime Republican stronghold where Democrats made gains during the Trump era, Arizona has been central to efforts by Trump and his allies to cast doubt on Joe Biden's 2020 presidential victory with false claims of fraud. This year, many Trump-endorsed candidates faltered in general elections in battleground states, though his pick in the Nevada governor's race, Republican Joe Lombardo, defeated an incumbent Democrat.

Before entering politics, Hobbs was a social worker who worked with homeless youth and an executive with a large domestic violence shelter in the Phoenix area. She was elected to the state Legislature in 2010, serving one term in the House and three terms in the Senate, rising to minority leader.

Hobbs eked out a narrow win in 2018 as secretary of state and was thrust into the center of a political storm as Arizona became the centerpiece of the efforts by Trump and his allies to overturn the results of the 2020 election he lost. She appeared constantly on cable news defending the integrity of the vote count.

The attention allowed her to raise millions of dollars and raise her profile. When she announced her campaign for governor, other prominent Democrats declined to run and Hobbs comfortably won her primary.

She ran a cautious campaign, sticking largely to scripted and choreographed public appearances. She declined to participate in a debate with Lake, contending that Lake would turn it into a spectacle by spouting conspiracy theories and making false accusations.

She bet instead that voters would recoil against Lake, who picked verbal fights with journalists as cameras rolled and struck a combative tone toward Democrats and even the establishment Republicans who have long dominated state government.

Pre-election polls showed the race was tied, but Hobbs' victory was still a surprise to many Democrats who feared her timidity would turn off voters. She overcame expectations in Maricopa and Pima counties, the metro Phoenix and Tucson areas where the overwhelming majority of Arizona voters live. She also spent considerable time in rural areas, looking to minimize her losses in regions that traditionally support Republicans.

Lake is well known in much of the state after anchoring the evening news in Phoenix for more than two decades. She ran as a fierce critic of the mainstream media, which she said is unfair to Republicans. She earned Trump's admiration for her staunch commitment to questioning the results of the 2020 election, a stand she never wavered from even after winning the GOP primary.

She baselessly accused election officials of slow-rolling the vote count this year and prioritizing Democratic ballots as she narrowly trailed Hobbs for days following the election.

Maricopa County Sheriff Paul Penzone said he increased security around the elections center Monday in anticipation that the race would be called and emotions could run hot, though he said there was no specific threat. Demonstrators have gathered outside the building for several days but have remained peaceful, he said.

"I think we're getting close to the end game so I want to be sure that we're prepared," Penzone told reporters in a news conference hours before the race call.

The sheriff's office was caught off guard two years ago when armed and angry protesters descended on the elections building in downtown Phoenix after Fox News and The Associated Press called Arizona for Biden, marking the first time a Democrat won the state in more than two decades. 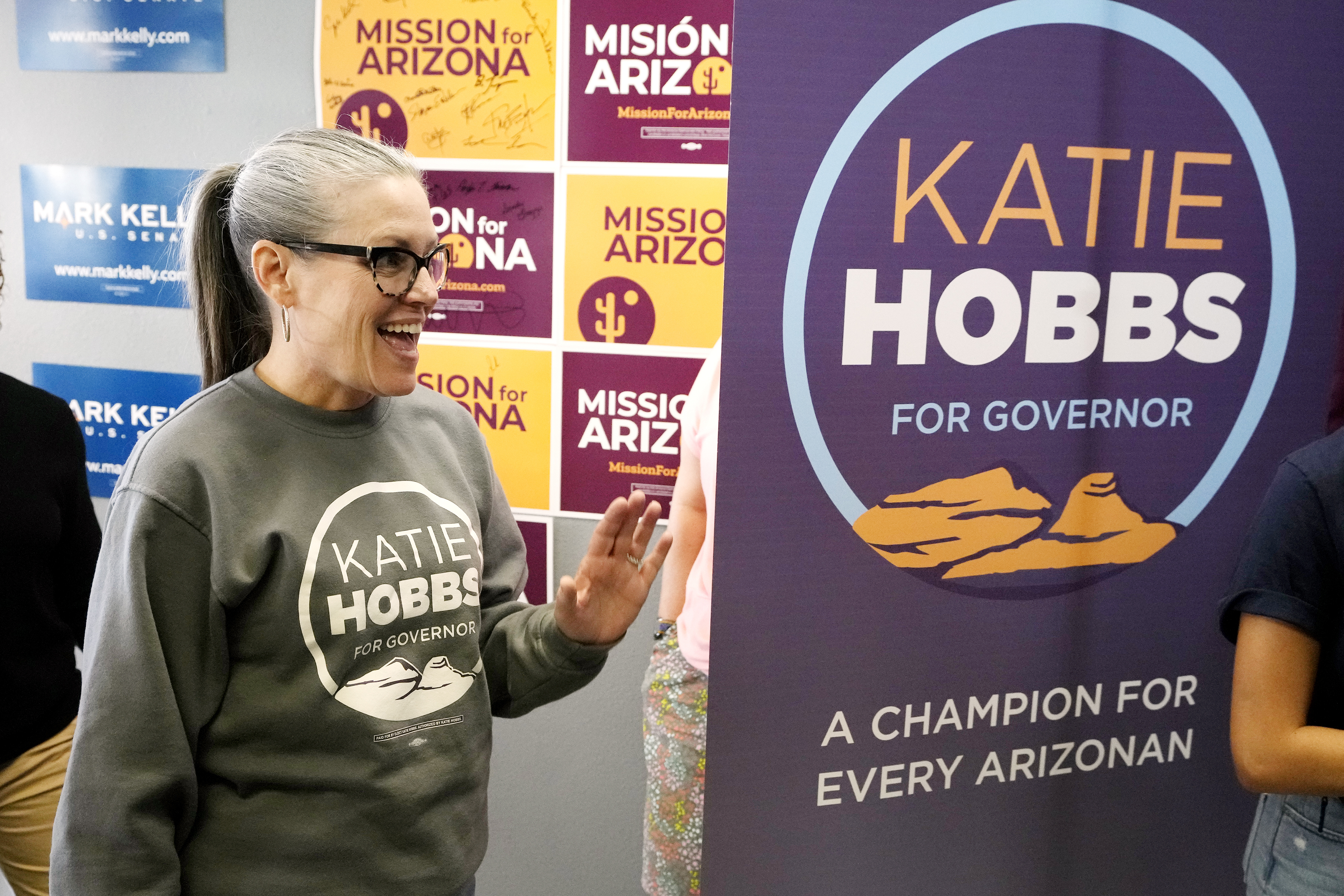 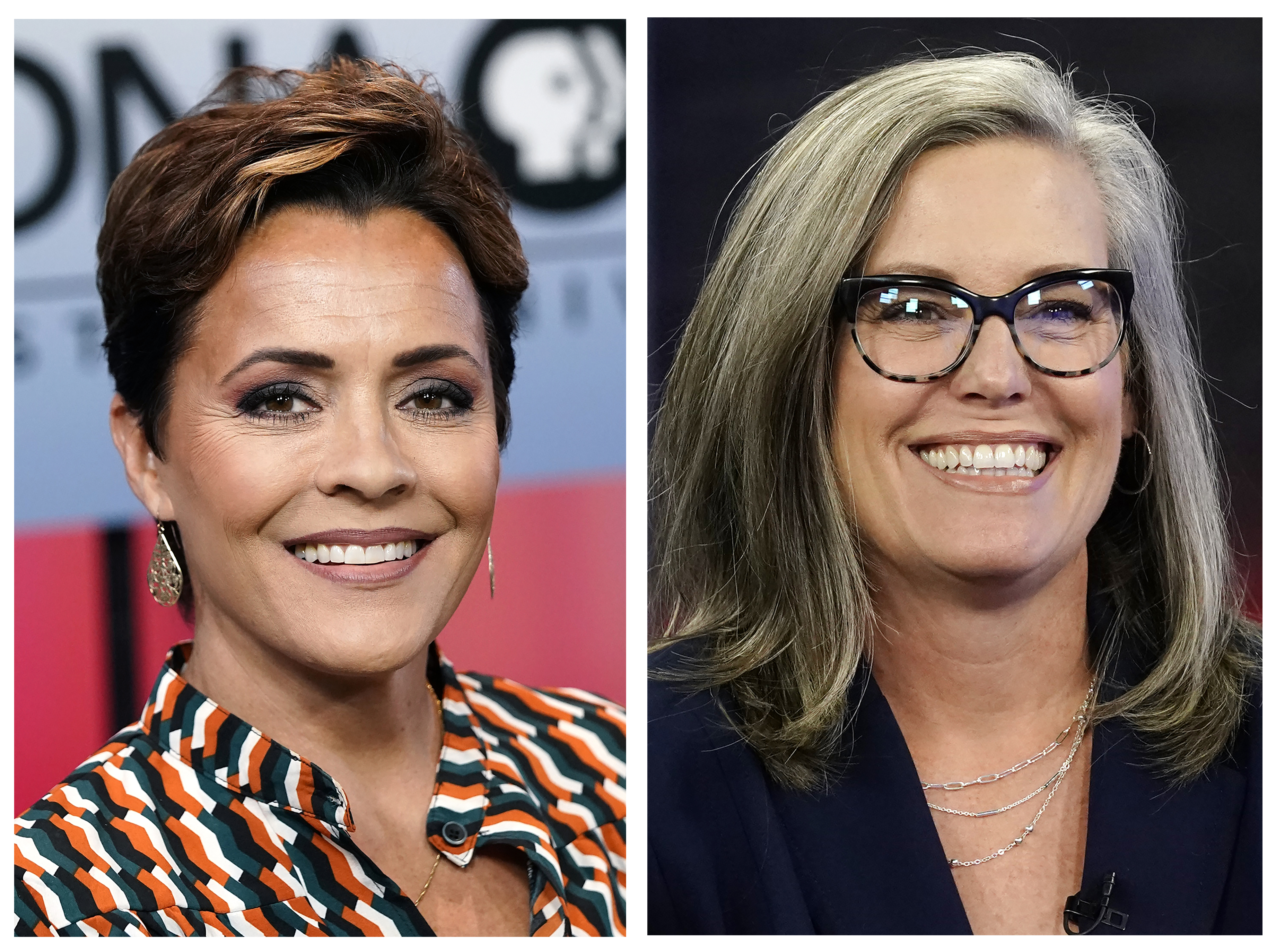 In this combination of photos Republican candidate for Arizona governor Kari Lake, left, appears before a PBS televised debate on Wednesday, June 29, 2022, in Phoenix and Democratic challenger Katie Hobbs smiles prior to a televised interview in Phoenix, Tuesday, Oct. 18, 2022. (AP Photo/Ross D. Franklin) 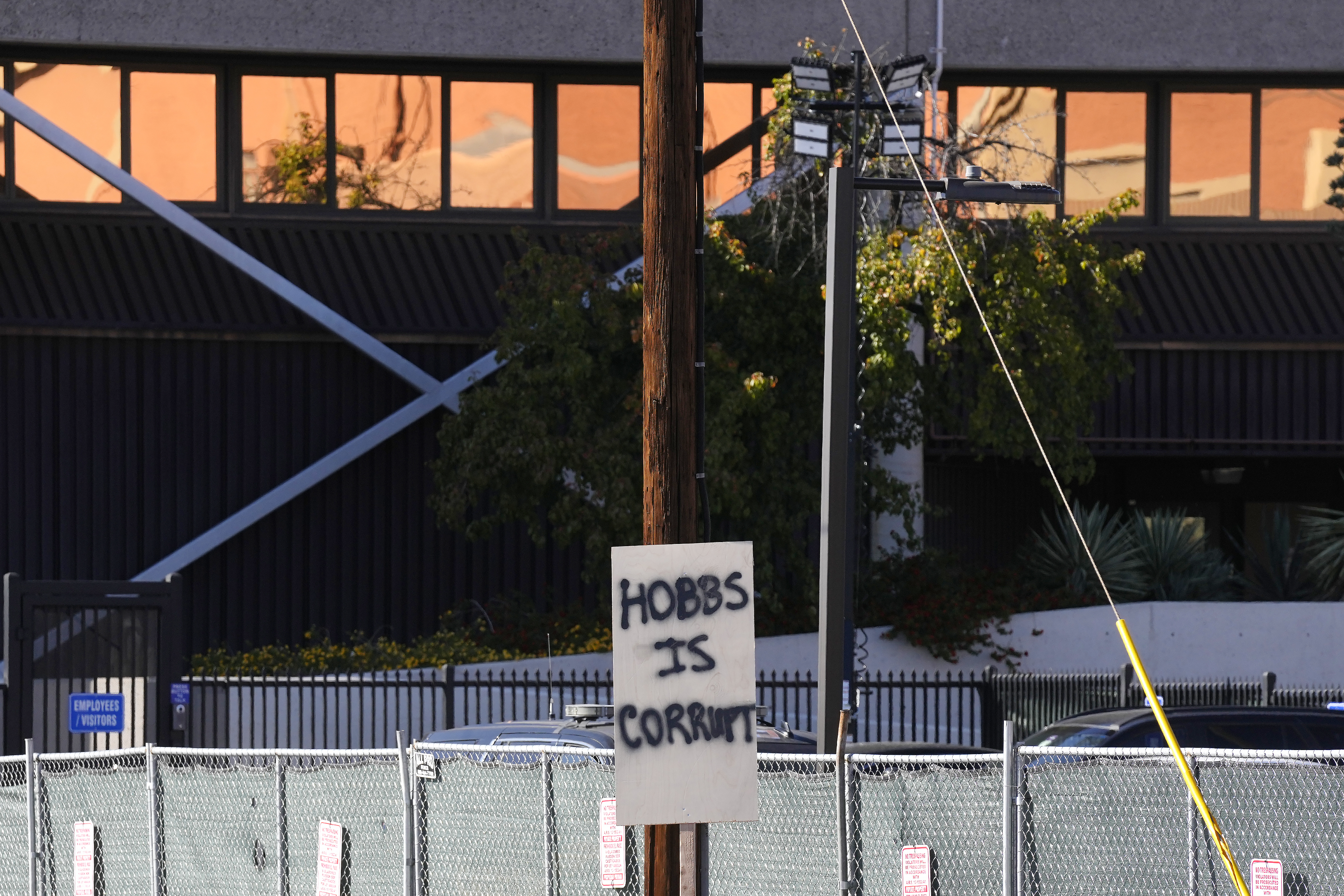