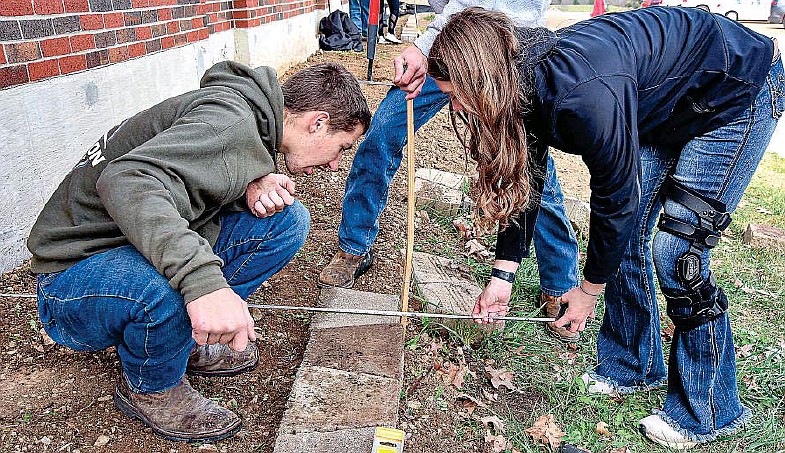 Taylor Brand and Dorothy Lackman measure the distance from the wall to the front of the block Monday, Nov. 14, 2022, while installing a border as part of a class project. Students taking a landscaping segment at Blair Oaks High School have been working at the elementary school to construct a block border on the building's main entry side. (Julie Smith/News Tribune photo)

You can't get much more local than the Blair Oaks School District's new landscaping crew.

In fact, their walk to the job site Monday was only a few hundred feet.

The group stood outside Blair Oaks Elementary on Monday, using hoes to clean up the grass at the edge of the sidewalk, level dirt in the garden beds and lay gray pavers along the border. They are Blair Oaks High School students, and they're members of the landscaping and design class, one of several new hands-on courses in the agriculture department.

The landscaping class will be offered in the fall, said instructor Katie Fifer, alternating each year with a floral design class. In the spring of each year, the school will offer greenhouse management in the school's new greenhouse that was made possible by FFA alumni.

Monday's temperatures hovered in the 40s, which Fifer said made for the coldest workday so far.

The students had about three weeks of classroom and safety instruction before heading out to clean up the landscaped area in front of the elementary school. Over time, the garden beds had fallen into disrepair, Fifer said, so students ripped up the old things, and cleared and leveled the area so it could be ready for new boxwood bushes from the greenhouse class in the spring. To keep costs down, the materials are being recycled--the pavers are the same stones that were there before.

The students got a chance to make a plan for the area themselves before taking their ideas before district administration.

"The main goals with this was to make the front of the elementary to look cleaner, and then also... we're having such a hard time finding maintenance employees, so this kind of minimizes the time that it'll take to maintain this area," Fifer said.

This project may be the first of many.

"The plan is for every year that we offer the class to pick a location on campus and then to kind of bring some life back to it," Fifer said.

The class is an elective, but many of the students are interested in a career related to landscaping.

Junior Dorothy Lackman said the class has provided a lot of new experiences. Lackman, who is the FFA president, said she's interested in agriculture business. She said she wanted to try the new class, and she's also getting some chances to learn more about business. While in the classroom, students have been planning their own landscaping company.

"We are also doing a landscaping project right now, which is really showing all the ins and outs of a smaller business just kind of getting started up and all that really goes into it," she said.

Lackman said she's enrolled in the greenhouse course next semester.

This type of interactive course allows students to learn skills they might not in a traditional classroom, Fifer said.

"It gives different kids an opportunity to excel, cause not everybody is extremely academic, and the kids really, really enjoy the hands-on component of it," Fifer said.

Students fill out a weekly task-sheet in which they evaluate their own work ethic. Fifer said students are very honest and can recognize when they're not putting in their full effort.

"They're probably tougher on themselves than I am," she said.

The class also offers a chance for students to be outside and active.

"It's kind of break from the classroom -- get out and do more hands-on activities," said junior Cole Peters.

Peters said he's thought about landscaping as a career, and he's been able to do some during the summer while working at a golf course.

He said he is looking forward to seeing the end results, having worked the project from start to finish, and thinks the area will look much better than before.