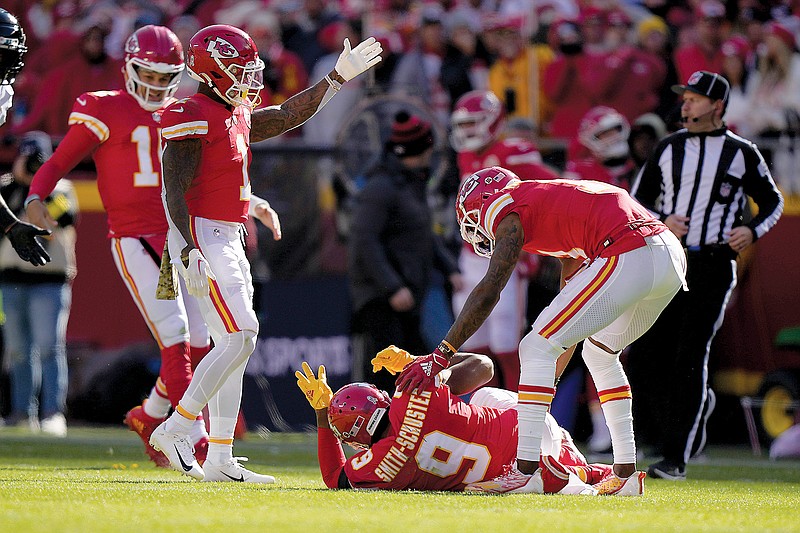 KANSAS CITY -- Chiefs wide receiver JuJu Smith-Schuster was seen laughing among teammates in the Kansas City locker room Sunday, shortly after he sustained a concussion during a victory against the Jacksonville Jaguars that raised questions about how to police helmet-to-helmet hits.

Smith-Schuster was coming across the middle to catch a pass from Patrick Mahomes when Cisco hit him high, drawing a flag from the officials. But while Smith-Schuster lay motionless on the Arrowhead Stadium turf, referee Brad Rogers picked up the flag and ruled that the hit was clean and there would be no penalty.

“After discussion on the field,” Rogers said, “the two officials came in and determined that the defender had set and braced for impact and hit shoulder-to-shoulder. They didn’t feel it was a use-of-helmet foul.”

Yet replays that were on the video boards at each end of Arrowhead Stadium clearly showed that Cisco’s helmet made contact with Smith-Schuster’s head, and that contact more than his shoulder inflicted the damage.

The wide receiver’s hands were initially frozen in a scene reminiscent of the concussion sustained earlier this season by Dolphins quarterback Tua Tagovailoa, which raised questions about how to police roughing the passer.

“We were mad,” Chiefs safety Justin Reid said. “I’ve had a lot of big hits and not once have I made helmet-to-helmet contact like that.”

Chiefs wide receiver Kadarius Toney was more succinct: “That was illegal,” he said.

Mahomes clearly remember the hit -- and another by Cisco on Marquez Valdes-Scantling later -- after Travis Kelce beat the safety for a late touchdown toss. The fiery quarterback had a few words for Cisco on the way to celebrate.

“Obviously there was some helmet-to-helmet contact and we want to get that out of the league as much as possible, for player safety,” Mahomes said afterward. “These guys on defense are playing, too, but by rule, if it’s helmet-to-helmet it is supposed to be a flag. I know that guy wasn’t trying to. I know it’s a bang-bang play.”

Mahomes mentioned perhaps helmet-to-helmet blows should be reviewed, much like targeting penalties are in college football, though he walked back that thought when asked to clarify what he meant.

“You want your guys to play hard, to play aggressive and play within the rules. That’s what we’ve got to do,” Jacksonville coach Doug Pederson said. “You don’t want to take the physicality away from anybody. This is a game where you have to play snap-to-whistle. You never want to hurt anybody, but you want to keep the aggressiveness.”

Smith-Schuster, who signed a one-year prove-it deal with Kansas City, had been on a tear during the past month as he became more familiar with Mahomes and the offense. He caught five passes for 113 yards and a touchdown against Buffalo, seven for 124 yards and a score against San Francisco and 10 for 88 yards last week against Tennessee.

He had two catches for 33 yards before leaving Sunday’s game.

“It was scary when you’re out there. We saw him after the game and he seemed perfectly normal,” Mahomes said, “giggling around, joking around, stuff like that. Just take precautions and get him back healthy as quickly as possible.”

The Chiefs already were missing wide receiver Mecole Hardman, who had scored in three straight games, because of an abdominal injury, and second-round draft pick Skyy Moore has struggled to make an impact all season.

They were helped out Sunday by the emergence of Toney, who caught his first NFL touchdown pass in his second game since a trade with the Giants. Toney finished with four catches for 57 yards along with 33 yards rushing.

“He’s a smart kid, and he does pick it up easy, and he’s willing to spend time at it, too,” Chiefs coach Andy Reid said. “He’s very talented. We’re trying to give him some things that he’s done before and add one or two things he hasn’t done, so he can continue to grow, and obviously the quarterback has trust in him.”