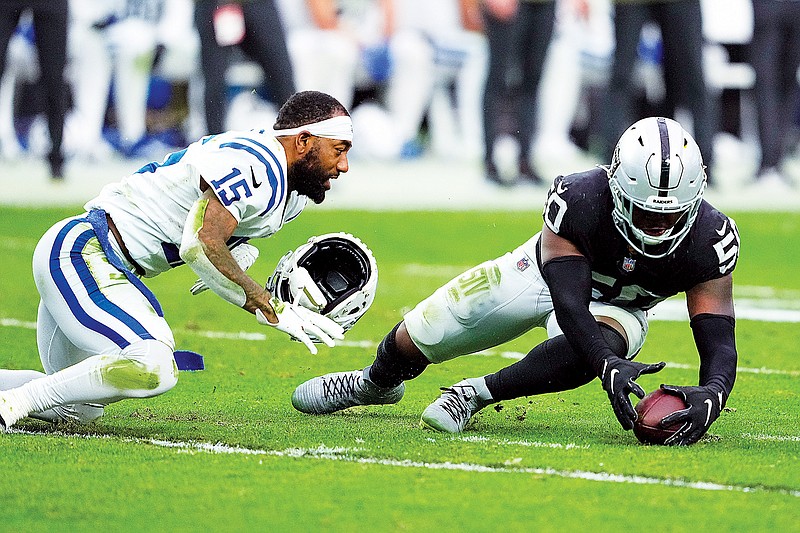 ORCHARD PARK, N.Y. -- Patrick Peterson intercepted Josh Allen with 1:12 left in overtime to finally end a sloppy, yet thrilling back-and-forth game Sunday between two of the NFL’s best teams, and the Minnesota Vikings completed their rally from a 17-point second-half deficit to beat the Buffalo Bills 33-30.

The Vikings took advantage of three turnovers by Allen in the fourth quarter and overtime, pulling ahead late in regulation when he mishandled a snap and fumbled in the end zone.

Greg Joseph put the Vikings ahead to stay by hitting a 33-yard field goal with 3:42 left in overtime. The game didn’t end until Allen, facing second-and-10 at Minnesota’s 20, forced a pass across the middle intended for Gabe Davis, only to have Peterson intercept it a few yards into the end zone, his second pick of the day. Peterson ran out and slid to the turf.

Kirk Cousins threw for 357 yards, and Justin Jefferson had a monster game with 10 catches for 193 yards, including an incredible one-handed grab to convert a fourth-and-18 for the NFC North-leading Vikings (8-1). Minnesota rallied to win when trailing with 2½ minutes or less remaining in regulation for the fifth time this season.

The Bills (6-3) dropped out of the AFC lead with their second straight loss.

The Bills, clinging to a a 27-23 lead, appeared to have won when they stopped Cousins for no gain on fourth-and-goal from the half-yard line with 49 seconds remaining.

On the very next play, Allen muffed the snap from center Mitch Morse, and Minnesota linebacker Erik Hendricks dived into the end zone to recover it for a touchdown.

Green Bay (4-6) trailed 28-14 in the fourth quarter before Rodgers led two long drives that ended with scoring passes to Watson.

McCarthy coached the Packers to their most recent Super Bowl title after the 2010 season and went 125-77-2 with Green Bay before getting fired in 2018.

The Cowboys (6-3) blew a 14-point lead heading into the fourth quarter for the first time in franchise history. They entered Sunday with a 195-0 record in such games, including playoffs.

McCarthy chose to go for it on fourth-and-3 from Green Bay’s 35 on the opening possession of overtime instead of trying a long field goal. Dak Prescott was pressured by Jarran Reed and threw a desperation pass to Tony Pollard that fell incomplete.

The Packers had third-and-1 from their 44 on the ensuing drive when Rodgers threw across the middle to Allen Lazard, who caught the ball just beyond midfield and raced to the 20 for a 36-yard gain. That set up Crosby’s game-winning kick.

Green Bay’s Aaron Jones rushed for 138 yards and a touchdown.

Brady connected with Julio Jones and Chris Godwin on scoring passes and Leonard Fournette ran one in as the Bucs (5-5) improved to .500 and snapped Seattle’s four-game winning streak.

German fans packed Allianz Arena for the historic game and the Bucs delivered with a balanced offensive performance on three long scoring drives. Rachaad White ran for 105 yards on 22 carries.

Brady completed 22-of-29 passes for 258 yards to add Germany to his list of international wins after victories in London (twice) and Mexico City with the New England Patriots.

Trailing 21-3, Seattle’s Geno Smith threw touchdown passes to Tyler Lockett and Marquise Goodwin to make the score 21-16 with 3:58 to play. But Brady and the Bucs didn’t let Seattle get the ball back.

LAS VEGAS -- Matt Ryan got his starting job back under TV analyst-turned-interim coach Jeff Saturday, and the veteran quarterback delivered a 35-yard touchdown pass to Parris Campbell to lead Indianapolis past Las Vegas.

The touchdown with 5:07 left came shortly after the 37-year-old quarterback converted a third-and-3 with a 39-yard run to the Raiders 36-yard line.

His play helped give Saturday, who just a week ago was an ESPN analyst before being hired despite no NFL coaching experience, his first victory. It also handed the Raiders (2-7) their third loss in a row and will increase the scrutiny on first-year coach Josh McDaniels, who took over a playoff team from a year ago. The Raiders were booed off the field.

Ryan completed 21-of-28 passes for 222 yards, and Jonathan Taylor rushed for 147 yards, including a 66-yard touchdown for the Colts (4-5-1). It was Taylor’s first 100-yard game since the season opener against the Houston Texans, when he rushed for 161 yards.

The duo offset the play of Raiders wide receiver Davante Adams, who caught nine passes for 126 yards and a TD. But a fourth-down pass to Adams was broken up by Colts cornerback Stephon Gilmore, causing a major celebration on Indianapolis’ sideline.

In a game that was a blowout by the fourth quarter, Tagovailoa connected with three receivers for his third straight three-touchdown game.

Since returning in Week 7, Tagovailoa has 10 TD passes and no interceptions. He finished with 285 yards on 25-of-32 passing.

Cleveland (3-6) scored a touchdown on its opening drive, thanks in part to a 48-yard kickoff return by rookie Jerome Ford, but Miami tied the game on its first possession en route to scoring 24 straight points. The Browns never got closer than 14 points the rest of the way.

Cleveland’s Jacoby Brissett completed 22-of-35 passes for 212 yards and one touchdown against one of his former teams. Nick Chubb had 11 carries for 63 yards, including a 33-yard TD run in the fourth quarter.

Both teams played their backup quarterbacks with starters Matthew Stafford and Kyler Murray sidelined by injury. McCoy threw a TD pass to A.J. Green and hit DeAndre Hopkins for 98 yards on 10 catches, while Los Angeles’ John Wolford passed for 212 yards in a much more inconsistent performance.

The defending champion Rams (3-6) lost for the fifth time in six games, and they also lost Kupp in the fourth quarter when he went down awkwardly while being hit by Marco Wilson after failing to catch a poorly thrown pass from Wolford.

In the 34th start of his 13-year career, McCoy went 26-of-37 while patiently running a disciplined offensive game plan for the Cardinals (4-6). Murray sat out with a hamstring injury, but Arizona grinded out a much-needed victory for coach Kliff Kingsbury after losing four of its past five.

Rondale Moore had nine catches for 94 yards, including a jaw-dropping grab on a long pass on fourth-and-3 in the fourth quarter to set up Arizona’s clinching TD run by Conner.

Los Angeles is three games under .500 for the first time in Sean McVay’s career.

The Titans (6-3) won for the sixth time in seven games. Tannehill returned after missing the last two games with a sprained right ankle, and he appeared rusty early as the Titans fell behind 10-0 in the second quarter and were trailing 208-53 in total yards shortly before halftime.

Denver (3-6) has lost lost five of six. The Broncos had plenty of chances but couldn’t score after halftime. Russell Wilson had a final chance to tie the game, but his pass on fourth-and-8 from the Titans 25 was tipped and picked off by Terrance Mitchell with 11 seconds left.

Tannehill accounted for 70 yards on a drive capped with a 9-yard TD pass to Westbrook-Ikhine to pull within 10-7 just before halftime. In the third quarter, Titans used a flea-flicker with Derrick Henry tossing the ball back to Tannehill, who found Westbrook-Ikhine wide open down the right sideline for a go-ahead 63-yard TD.

CHICAGO -- Jamaal Williams scored on a 1-yard run in the closing minutes, Jared Goff threw for 236 yards and a touchdown, and Detroit overcame another spectacular effort by Chicago’s Justin Fields.

The Lions (3-6) scored 21 points in the fourth quarter on the way to their second straight win after losing five in a row. They stopped a 13-game road losing streak.

Detroit wiped out a 14-point deficit with two quick TDs, tying it on a 20-yard interception return by Jeff Okudah.

Fields then went 67 yards untouched for a TD to put Chicago (3-7) back on top 30-24. Cairo Santos missed the extra point.

Goff led an eight-play, 91-yard drive in the closing minutes. Williams made it 31-30 when he scored with 2:21 remaining.

Fields ran for 147 yards and two scores, after rushing for 178 the previous week against Miami. He became the only quarterback in the Super Bowl era with multiple rushing touchdowns of 60-plus yards in the same season.

Fields also threw for 167 yards and two scores, including a 50-yarder to Cole Kmet.

Fueled by the return of star outside linebacker T.J. Watt, the Steelers (3-6) held the Saints to 186 yards to win for the second time in eight games. Pittsburgh sacked Andy Dalton twice and forced a pair of fourth-quarter interceptions to thwart any hope of a late rally by the Saints (3-7).

Watt hadn’t played since tearing his left pectoral late in a Week 1 win against Cincinnati.

Pittsburgh ran for a season-best 217 yards -- including 99 by Najee Harris and 51 by Pickett -- and didn’t turn it over for the third time this season. The Steelers are 3-0 in those games.

Pickett completed 18 of 30 passes for 199 yards without an interception. He also shook off a tweaked left ankle to convert a couple of late quarterback sneaks, including a 1-yard dive with 8:40 to play that gave the Steelers a 10-point lead.

The Saints largely beat themselves. While the defense sacked Pickett six times, it also committed six penalties that gave the Steelers first downs.

The 49ers (5-4) returned from their bye as healthy as they’ve been all season on offense and with hopes of making a second-half run. They did just enough against the short-handed Chargers (5-4).

McCaffrey ran it in on the next play and has now accounted for four touchdowns in three games since arriving from Carolina in a midseason trade.

Garoppolo went 19-for-28 for 240 yards while San Francisco relied heavily on the ground game, rushing 40 times for 158 yards.

Justin Herbert went 21-for-35 for 196 yards with a touchdown pass for the Chargers, who were playing without both starting tackles and receivers.