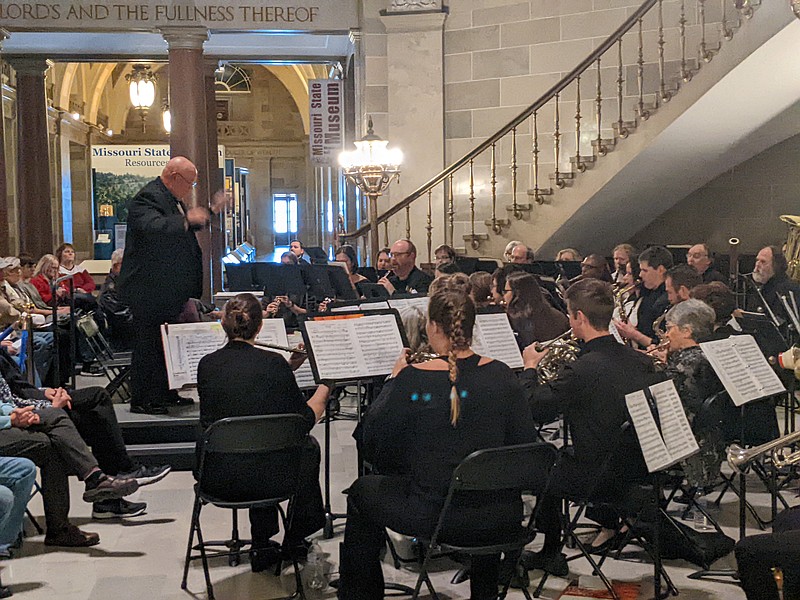 Ryan Pivoney/News Tribune photo: Paul Hinman directs the Jefferson City Community Band in performing "Light Calvary Overture" during its fall concert Sunday, Nov. 13, 2022, at the Missouri Capitol. Hinman, a founding director of the band, said the band is still recouping skills after the COVID-19 pandemic put it on a hiatus for nearly two years.

After the COVID-19 pandemic sidelined the Jefferson City Community Band with a nearly two year hiatus, the group had something to prove at its first full season concert Sunday.

"Music is back," according to Paul Hinman, a founding director of the band.

The 65-person band performed a variety of musical selections Sunday afternoon in the Capitol Rotunda. Approximately 150 people attended the free fall concert -- the band's first since 2019.

The Jefferson City Community Band has been performing around the Capital City since 2010, but took time off amid the pandemic. After regrouping, its membership consists of a variety of amateur and professional musicians, ranging from high school students to experienced retirees.

"It feels so nice to have live music back," Hinman said. "It's unfortunate that we had to deal with the things we've dealt with over the last couple of years, but now that things have moderated pretty severely, it's pretty easy to be able to do this and not have a problem."

Hinman said the band has been working to make up time lost to the pandemic, and it has a lot to make up for.

"The time off and away impacted what we're able to do because people's skills were put on hold during that time," he explained. "Their abilities, their understanding, their opportunities for growth have just kind of sat. Because it wasn't going forward, it was going backward."

The band is still in recovery, Hinman said. Its skills have developed rapidly during the past month in particular, he said, but it'll likely take until the end of the year to be mostly recovered.

Before Sunday's performance, Hinman reminded the musicians to be mindful of their concentration and endurance throughout the show.

Experienced musicians make up a majority of the band, Hinman said, but even experienced players can experience a "regression to the mean."

"People don't know how to recover quickly from the lapse of regular interaction," he said.

Like any other form of education, it's a process, Hinman said. And people develop at different paces.

"We're not where we want to be, but we're a whole lot better than we have any business being at this point," he said.

Hinman said he likes to arrange performances "all over the map" so every audience member walks away hearing something they liked.

Becky Miller, a member of the JCCB board, said song selections included some fun ones to celebrate the fall season, particularly those from the "Wicked" musical.

Miller said it was great to be back in the Capitol. She said the building offers acoustics unlike anywhere else the band performs.

"It's just a great venue," she said. "The acoustics in there for a band like ours are really tremendous."

Hinman described the Capitol Rotunda as a challenging but beautiful venue. Even after a musician stops, the Capitol halls tend to carry the sound for a couple more seconds, he said.

"It's a very live environment," he said with a laugh. "The sound bounces around. We've been having fun."

Musicians interested in joining the Jefferson City Community Band, a completely volunteer band, can contact the band's Facebook Page, reach out via email at [email protected] or join the band during rehearsals Tuesday evenings at 7 p.m. in the Helias High School band room.

"We hope that people, as they hear us and recognize that we're back and doing this, more people will come out and join us," Hinman said. 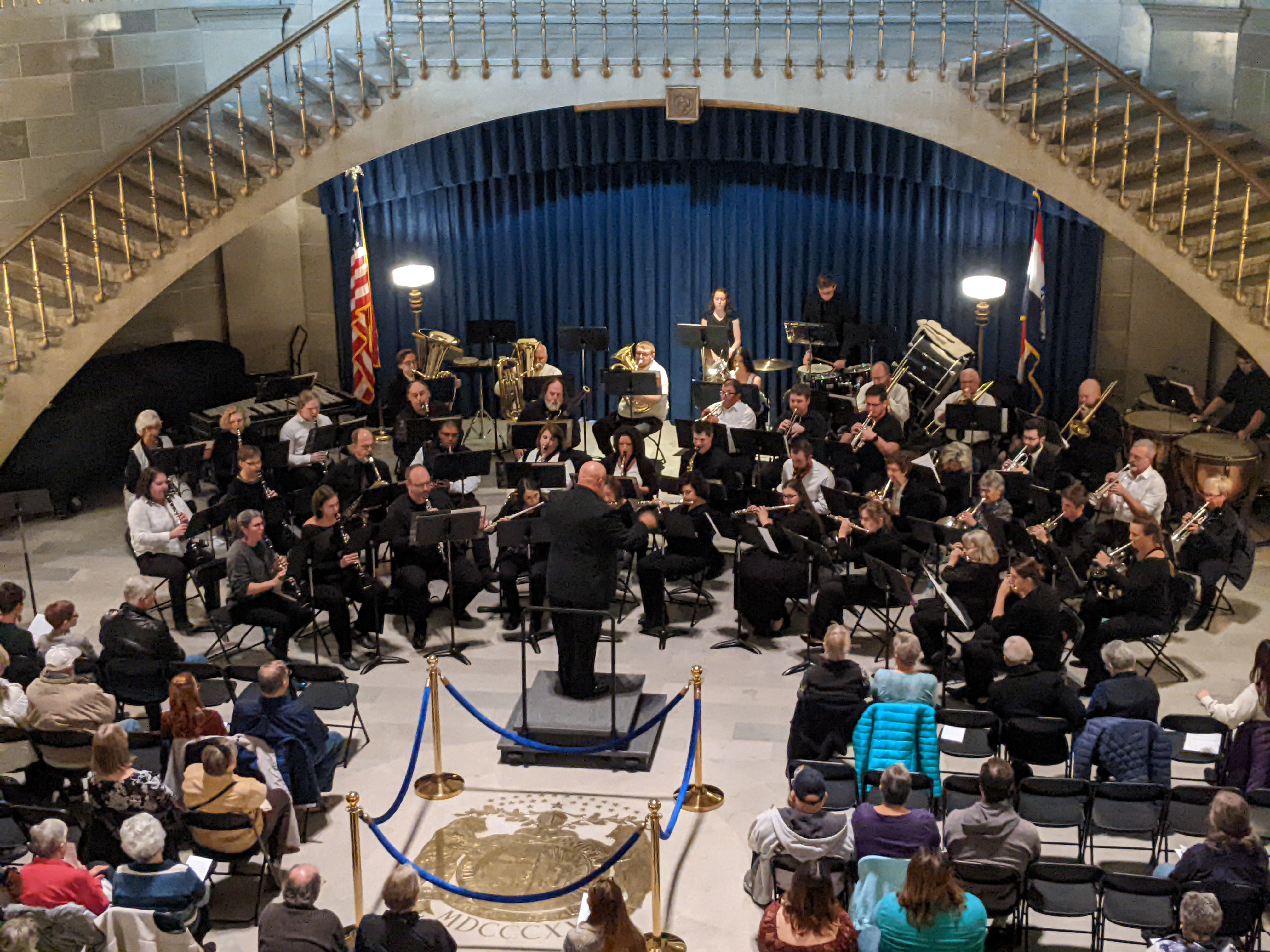 Ryan Pivoney/News Tribune photo: The Jefferson City Community Band performs its first fall concert since 2019 Sunday at the Capitol. The band returned from a nearly two-year break with a new season Sunday, Nov. 13, 2022. Three more shows are scheduled before summer 2024. 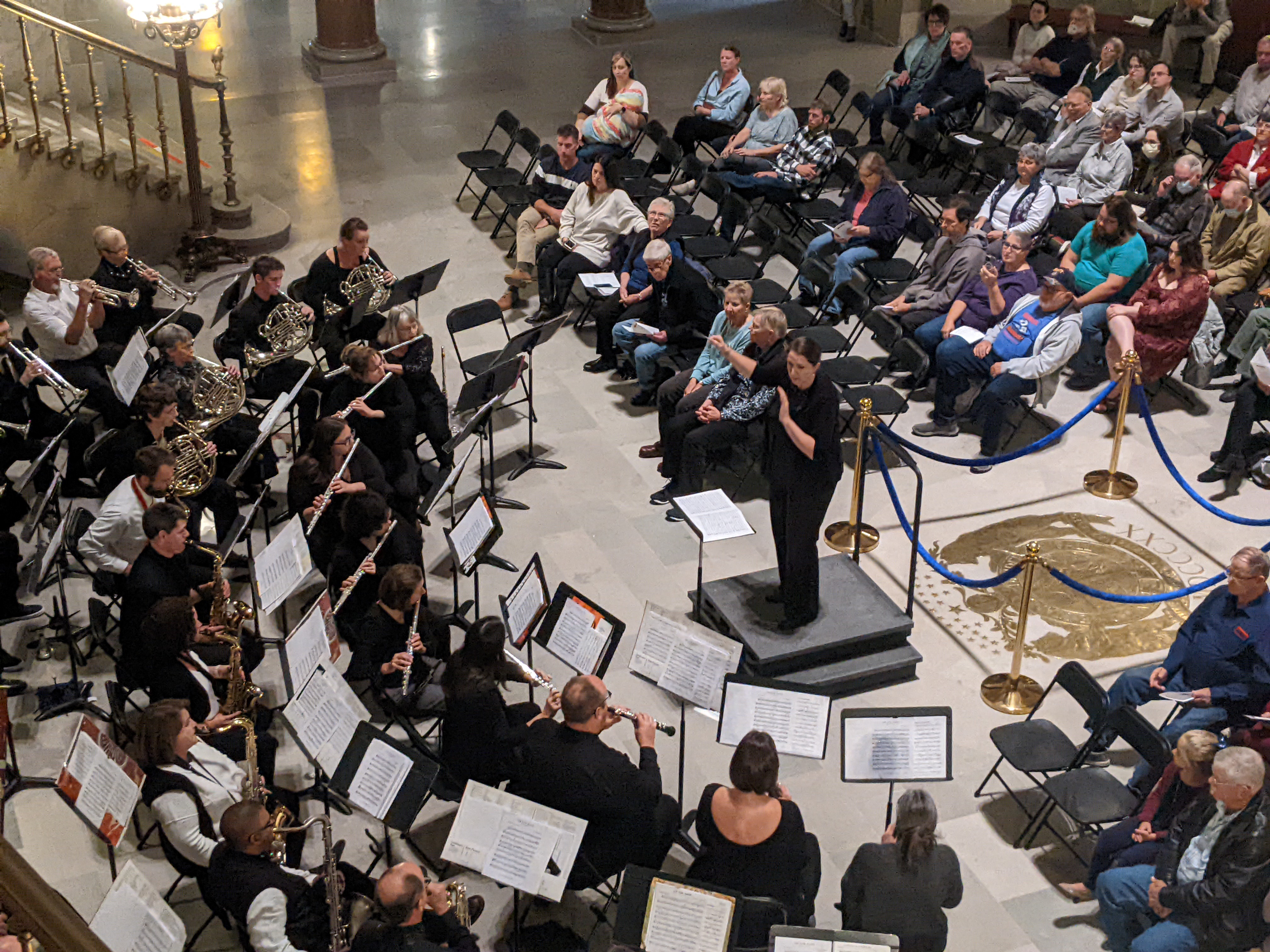 Ryan Pivoney/News Tribune photo: Greta Lieser directs the Jefferson City Community Band Sunday, Nov. 13, 2022, during its first performance at the Capitol since 2019. The band performed a wide range of music, from English folk to selections from the "Wicked" musical. 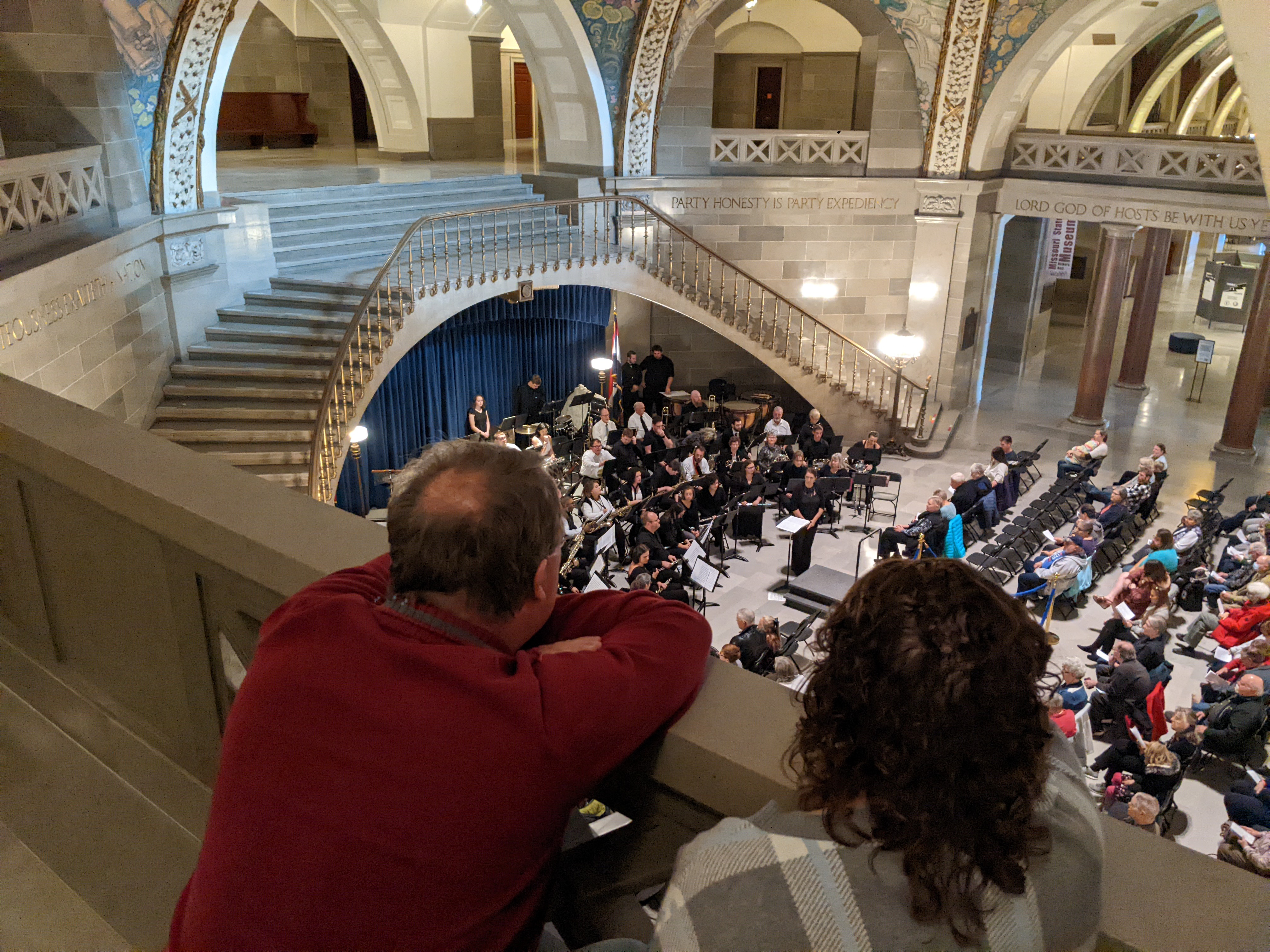