From the Stacks: Teen tackles life in Communist Romania 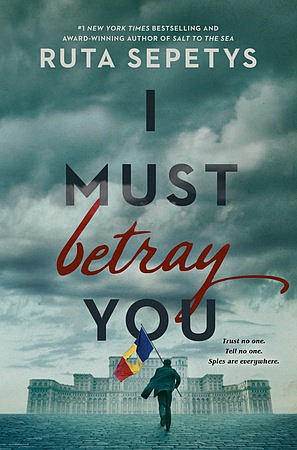 In "I Must Betray You," Ruta Sepetys takes us back to the fall of 1989 in Bucharest, Romania. Nicolae Ceausescu has been in power for decades, and the country is now firmly a communist nation where everyone spies on everyone else and you don't know who you can trust. Family, friends, classmates, teachers -- any of them could be an informant. The secret police are always watching and waiting for an opportunity to recruit citizens.

People live in constant fear. There is very little comfort in their daily lives. Their beautiful cities were destroyed to build blocks of concrete apartments where families are squashed into tiny living spaces. People are always hungry and must stand in line for hours for crumbs; electricity is not reliable nor is heat -- a coat is a very valuable asset during the brutal winter months. Women are pressured to have as many children as possible for the nation, but they cannot provide for those children. Everyone is expected to contribute to society working or going to school 12 hours a day.

Cristian Florescu is 17 years old and lives with his parents, sister and grandfather in a small apartment in Bucharest. In some ways, Cristian is a typical teen who likes to hang out with his friends and has a crush on a girl in his class. He doesn't always agree with his parents and dreams of attending university and becoming a writer one day. His grandfather tells him stories of the Romania that existed before the Communist regime took power, and he dreams of a better life.

Cristian's life changes the day he is recruited by the secret police. He is found to have an American dollar in his possession, which is illegal. Even saying the word dollar is illegal. In order to save himself and receive life-saving medicine for his grandfather, Cristian agrees to spy on the son of an American diplomat. His friendship with the diplomat's son opens Cristian's eyes to the truly horrible conditions he and other Romanians are forced to deal with.

As Cristian becomes more and more embroiled in the subterfuge of spying, he realizes how many of his family, friends and neighbors are also spies for the Ceausescu regime. Everyone gets caught eventually, and because everyone spies on everyone else, there is always something that can be used to blackmail you with. Heartbreakingly, Cristian comes to realize someone in his own family has provided information on him to the secret police.

Romanians are forbidden from any news other than the official news distributed by the government. Yet, there is Radio Free Europe. Through the radio messages, Cristian learns about the revolutions taking place throughout Eastern Europe as, one by one, communist regimes fall and the people rise up. Finally it is Romania's turn for freedom. Finally the foot of the dictator will be lifted from the necks of the people, but at what cost.

My favorite types of books are those that take me to places and times I know very little about. I have very vague memories of the fall of the Berlin Wall and the break up of the Soviet Union, but at the time, I wasn't that interested in world events. It is not an era that receives a lot of attention in literature, but it is a fascinating time period. I really appreciate the fact that this story is told not from the point of view of a revolutionary or someone important to the country, but through the eyes of a regular teenager who just wants to be able to have a life.

This story is heartbreaking when you realize so many of the other communist regimes fell peacefully at that time, yet Romania did not go peacefully. It was a bloody revolution that ended in just a slightly better government than the one that was deposed. Yet the people had hope, hope things would improve and lives would be better. Ruta Sepetys is an amazing storyteller who brings this period to life in a truly remarkable way.