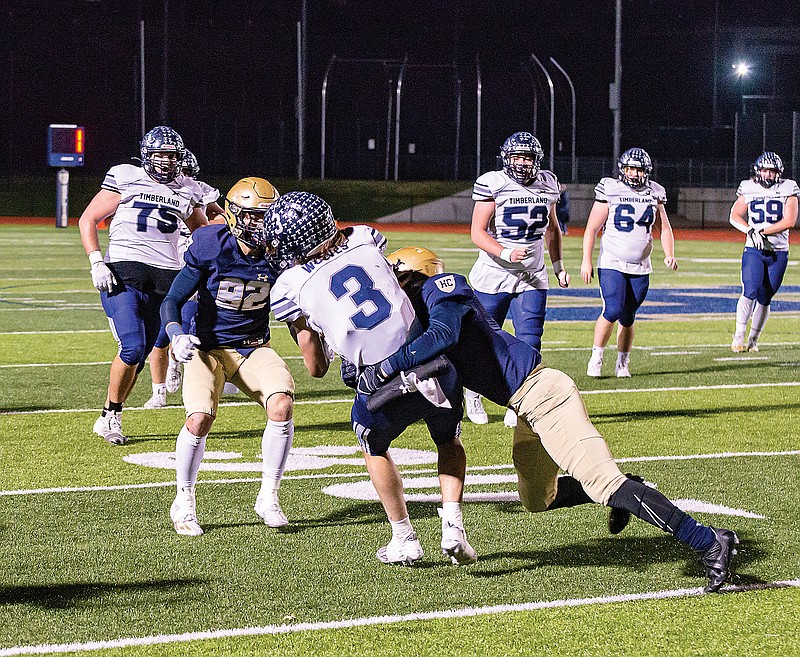 The Helias Crusaders knew they were in for a battle Friday night.

They didn’t make enough plays to win it.

“We knew we would have to play really well to win and we didn’t play really well,” Helias coach Chris Hentges said after the Crusaders dropped a 41-24 decision to the Timberland Wolves in the Class 5 District 4 championship game at the Crusader Athletic Complex.

“We played well in spurts, but we didn’t play a four-quarter complete game and we weren’t going to win if we didn’t do that.”

The Crusaders were making their second appearance in a Class 5 district title game in two years after being bumped up the MSHSAA championship factor after winning the Class 4 state title in 2020.

“It would have been nice to get this one and win a district title after being moved up,” Hentges said.

Helias scored first and didn’t trail in the first half Friday night.

After getting a turnover on downs on the first drive of the game by the Wolves, the Crusaders went 65 yards in six plays to take the lead. The final 41 of those yards came on a run by Alex Marberry and the first of three PATs by Nic Calvaruso gave the Crusaders a 7-0 lead midway through the first quarter.

It was one of three interceptions in the game for the Crusaders against Raines, who had just four in the first 11 games this season.

“We made some good plays defensively in the first half,” Hentges said.

The Crusaders were facing a third-and-16 from their own 14 when a pass near midfield was dropped that could have been a touchdown.

“We left a few points on the field,” Hentges said.

The Wolves tied the game on their next possession, going 67 yards in nine plays. Raines threw a 16-yard pass to Creighton Ervin for the touchdown, then kicked the extra point to tie it at 7 two plays into the second quarter.

Helias recovered a fumble to end Timberland’s next drive, with Myles Gresham falling on the ball at the the Crusaders’ 46.

On the next play, Drew Miller found Marberry sneaking out of the Helias backfield and hit the sophomore down the left side for a 54-yard touchdown catch and run. Calvaruso’s PAT made it 14-7 with 5:39 to go before halftime.

Timberland answered on its next drive, going 90 yards in nine plays after a penalty on the kickoff return. Ervin ran it in from 5 yards out and Raines’ extra point tied it at 14 with 3:17 on the clock.

That was enough time for the Crusaders to drive to the Wolves’ 10, where Calvaruso came on to kick a 27-yard field goal in the final minute to give Helias a 17-14 lead going into intermission.

Timberland dominated the stat sheet in the first two quarters. The Wolves had 339 total yards -- 130 rushing and 209 passing -- while picking up 19 first downs. They were hampered by their four turnovers.

Helias had 158 passing yards and just 64 yards on the ground in the first half. Hentges said getting more out of the run game was the goal in the second half.

“We didn’t really have any sustained drives and to do that, we needed to run the football,” Hentges said.

Helias got the ball to start the second half and got to near midfield before being forced to punt. But the kick went just 12 yards and Timberland got the ball at its own 45.

A 23-yard pass from Raines to Jaden Morrison on first down got the Wolves into Crusader territory. Eight plays later, Raines hit Travis Reeves for a 2-yard touchdown pass and after Raines’ extra point, the Wolves had their first lead of the night at 21-17.

The next three Helias drives ended with interceptions, the second which led to a Timberland touchdown when the Wolves took over at the Crusaders’ 22. Three plays later, Raines scored on a 20-yard run and added the PAT to extend Timberland’s lead to 28-17.

Timberland had its only punt of the night on its next drive and Helias took over at its own 20. On a designed run, Miller picked up 53 yards on first down, then ran the next four plays as well, with the final being a 7-yard touchdown.

“With the way they were playing us defensively, that was one way we thought we could move the ball,” Hentges said.

Calvaruso’s PAT cut Timberland’s lead to 28-24 one play into the fourth quarter.

Timberland got that touchdown back on its next drive, going 74 yards on nine plays. The score came on a 7-yard run by Raines. The PAT was blocked and it was 34-24 with a little more than eight minutes left.

Helias had the ball two more times in the game, but came up empty. Timberland’s final score came with 1:10 left on a 4-yard run by Tank Billings to make it 41-24.

“His ability to extend plays was really the story of the game,” Hentges said. “You can’t cover forever, he could keep plays alive long enough to make something out of them.

“We needed to possess the ball more than we did, we needed to extend drives and make sure those drives ended with points. With that dynamic quarterback, he was going to make you pay if you didn’t do that.”

Timberland (9-3), the fourth seed in the district, will host Francis Howell (11-0) in the quarterfinals this Friday night.

Miller finished 10-of-24 for 211 yards passing while leading the Crusaders’ run game with 136 yards on 21 carries.

Miller was one of more than 20 seniors who played their final high-school game Friday night.

The loss snapped a six-game winning streak for Helias (9-3).

“To overcome all of the injuries, two early losses, some teams might have packed it in, but we didn’t,” Hentges said. “They worked hard every day, put ourselves in a position to win a district title.

“For us to fight as hard as we did and to get as far as we did, it was an accomplishment for these players. A nine-win season is very good, it’s just a shame it had to end tonight.”