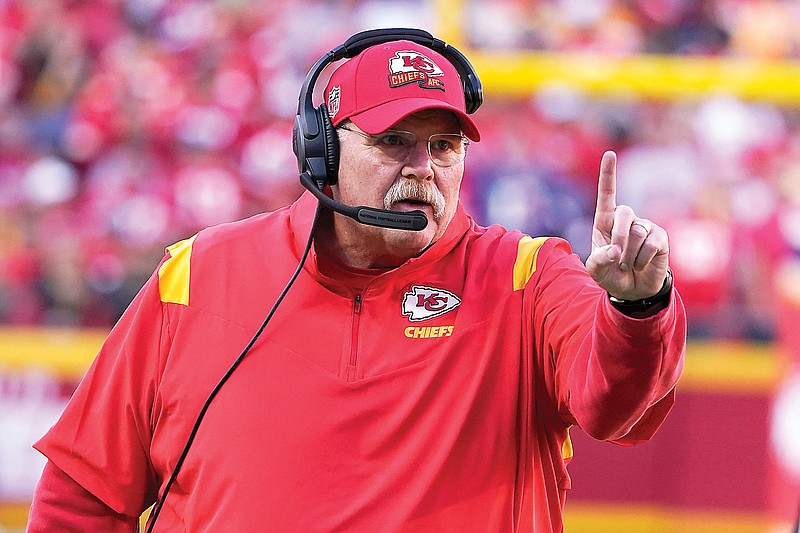 Chiefs coach Andy Reid watches from the sidelines during the first half of last month’s game against the Bills at Arrowhead Stadium in Kansas City. (Associated Press)

KANSAS CITY -- Doug Pederson will always feel indebted to Chiefs coach Andy Reid for the way his career played out.

Both the playing one and the coaching one.

It was Reid who gave Pederson, then a backup quarterback for the Packers, an opportunity to be an NFL starter with the Eagles. And years later, it was Reid who welcomed Pederson back to Philadelphia as an offensive quality control coach, a job that would serve as the jumping-off point for his rise to become head coach, first of the Eagles and now the Jaguars.

“I owe a lot to Coach Reid and the things he taught me,” Pederson said last week. “When I became coordinator there in Kansas City, we spent so much time together, in meetings and one-on-one, and everything about him is pouring himself into other people. He did that with me and prepared me for my first job in Philadelphia, and that went a long way, and now here in Jacksonville, taking some of the same things I learned from him and applying them here.”

The two remain close, talking often during the season. But those phone calls and text messages stopped last week as the Jaguars prepare to visit the Chiefs today at Arrowhead Stadium.

It will be the second matchup between mentor and pupil -- Reid won the first when the Chiefs beat the Eagles on Sept. 17, 2017. In fact, the Kansas City coach is 17-9 when facing former assistants as head coaches.

“He’s a good friend,” Reid said of Pederson, “and I think he’s doing a heck of a job down there. The players have bought into what he’s teaching. They’re well-coached and you know what? They have good players and they play very hard.”

Pederson won’t be the only familiar face on the opposing sideline.

Jaguars quarterbacks coach Mike McCoy played for Reid with the Packers in the ’90s, defensive coordinator Mike Caldwell played for and coached under him in Philadelphia and defensive assistant Bob Sutton was his first coordinator in Kansas City.

So yes, even though it has been seven years since Reid and Pederson worked together, there is a certain familiarity between the two coaching staffs. And that makes their preparation a little more complicated than usual.

“I have to ask,” Chiefs quarterback Patrick Mahomes said, “because I wasn’t here with Doug -- he left right before I got here -- ‘Do we need to change code words, change things up, so he doesn’t have any intel on the stuff we’re trying to run?’”

Reid and Pederson both acknowledged during the week the Kansas City offense maintains its roots in the West Coast system. But it has changed dramatically from the days when Pederson was orchestrating it with Alex Smith under center to the present, where offensive coordinator Eric Bieniemy has Mahomes putting up record-setting numbers.

He set new Chiefs marks last week for completions and attempts, going 43-of-68 for 446 yards in a 20-17 overtime victory against the Titans.

“Andy Reid, Patrick Mahomes, they just win. They get it done when they need to,” Jacksonville safety Andrew Wingard said, “and I think we’re starting to trend in that direction. It will be a good test. If you’re going to contend in the AFC, you’re going to have to go play Kansas City in January, February when it’s cold and stuff, so it’ll be a great challenge.”

The Jaguars rallied from a 17-point deficit last week to beat the Las Vegas Raiders 27-20.

Kansas City has won 10 straight November games, a streak that began Nov. 18, 2019, with a win against the Chargers. Part of the reason is the play of Mahomes, who is 12-2 as the starting quarterback. He has thrown 37 touchdown passes and nine interceptions during his second-best month statistically behind September.

Chiefs wide receiver Mecole Hardman has been dealing with an abdominal injury during what has been perhaps the most productive three-game span of his career. He has touchdown catches in each game, and five TDs total during that period, and he has given the Kansas City offense a different dynamic with his ability to stretch fields on jet sweeps.

Wide receiver Kadarius Toney could have been on the visiting sideline today. Ex-Jaguars coach Urban Meyer badly wanted to draft Toney with the 25th pick in 2021, but the former Florida standout went to the Giants five spots earlier. His first 18 months in New York were mostly a bust, prompting the Giants to trade him to Kansas City last month.

The Jaguars selected former Clemson running back Travis Etienne at No. 25 instead. He ranks sixth in the NFL in rushing and has been Jacksonville’s top offensive threat.

The Chiefs ran for 77 yards last week against Tennessee. Mahomes had 63 of them on scrambles. The other 14 yards came on 13 carries from their trio of running backs. None of them had a longer carry than 3 yards.

Jaguars quarterback Trevor Lawrence doesn’t miss many prime-time Chiefs games, and there have been a bunch already this season. He tunes in for one reason: Mahomes. And Lawrence is always taking notes.

“Just the things they do, really creative,” he said. “Obviously Patrick’s a great player, fun to watch. … Those are always good games to watch, and I’ve got a lot of respect for him and the way he plays the game is special. He’s a great player.”