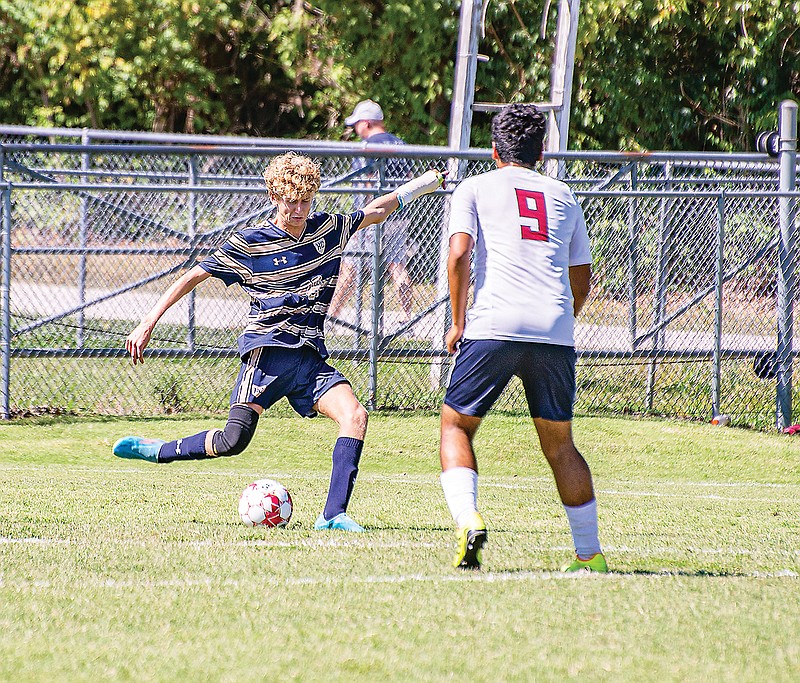 Nick Ammons of Helias get a free kick during a match against Joplin in the Richard Wilson Classic at the 179 Soccer Park. (Ken Barnes/News Tribune)

The Helias Crusaders picked a great time to post their first winning streak of the soccer season.

Adding one more win will get them to the Final Four.

“We’ve been very resilient,” Helias coach Jon DeSha said as the Crusaders (8-17) prepared to host the Orchard Farm Eagles (19-5) in the Class 2 quarterfinals at 1 p.m. today at the Crusader Athletic Complex. “I couldn’t be happier with the way they’ve handled themselves throughout the season.”

It was a tough regular-season for the Crusaders that including a record of 1-6 in one-goal games. At one point, Helias had nine starters out with injuries.

Despite the obstacles, DeSha remained confident the Crusaders could put things together.

“The game is full of ups and downs, wins and losses, luck and no luck,” he said. “It’s been a pretty positive attitude since Day 1. Even after our hard losses, many of the games we were in, we just couldn’t get to the top of the hill.”

Helias closed the regular season with an 8-1 win against Mexico before starting play in the District 4 Tournament.

DeSha didn’t view the beginning of the postseason as a fresh start.

“We try to use every game like that,” he said. “My memories of past events I can usually push aside pretty quickly, some people can’t do that.

“I’ve tried to implore the guys to play the game, learn from it and move on to the next one. And I think that’s been pretty successful.”

The fourth-seeded Crusaders opened the districts with a 6-1 victory against Kirksville to set up a semifinal against top-seeded Fulton.

Helias defeated Fulton 3-2 in overtime on a goal by Brendan Callahan.

“He scores goals at good times,” DeSha said. “I think that win took the pressure off us.”

Helias then took on second-seeded Southern Boone for the district title. Goals by Nick Dyro, his first of the season, and Ryan Crane gave Helias a lead before the Eagles scored in the final minute of the half to cut the Crusaders’ lead to 2-1 at intermission.

DeSha said he lit into the team during the break.

Helias scored the first four goals in the second half on their way to a 6-2 victory. Crane scored three of those goals to finish with four in the contest. He leads the Crusaders with 20 goals and 11 assists this season.

“He’s fun to watch and hard to defend,” DeSha said.

“We’ll have at minimum of five goal-scorers on the field at one time,” DeSha said.

The Eagles allowed just two goals in their three district games, winning 1-0 in their opener before winning the last two by 2-1 scores.

“They are like a lot of teams we’ve played this season,” DeSha said. “We need to take advantage of our opportunities, playing at home in front of the home crowd, playing on turf.”

Orchard Farm is allowing less than a goal per game this season and Eagles keeper Harry Reineke has 13 shutouts.

“From what I’ve seen on video, they like to play a lot of people behind the ball,” DeSha said “They’ll be hard to break down, their results show that.”

Orchard Farm is scoring an average of 2.3 goals per game. Bobby Pauly and A.J. Taylor lead the team with nine goals each, while Brock Williams has totaled seven.

“We expect Orchard Farm to come her prepared and ready to play,” DeSha said. “They have a lot of good soccer players.”

Getting off to a steady start this afternoon could be a key for the Crusaders.

“I feel comfortable saying if we can get the first 20 minutes under our belts, play with some confidence, we’ll do fine,” DeSha said. “It will come down to tactics and not making mistakes.

“I believe we are prepared to play.”

Orchard Farm closed the regular season at No. 4 in the Missouri Soccer Coaches Association Power Rankings in Class 2. Helias came in at No. 31.

The Helias-Orchard Farm winner advances to the Final Four, scheduled for Nov. 18-19 at World Wide Technology Soccer Park in Fenton.