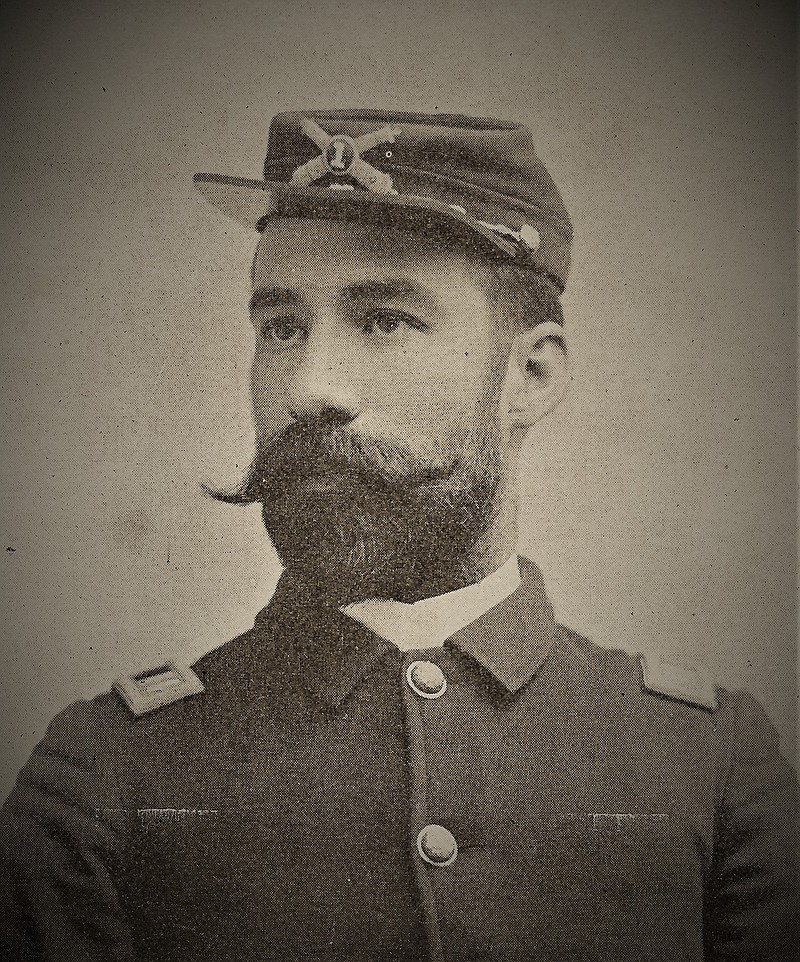 Military history is replete with stories of physicians who served in uniform, tending to the wounds and medical emergencies of their comrades.

Less often witnessed are accounts of those forgoing their medical background to pursue careers as soldiers, demonstrating their aptitude for command and embracing opportunities to lead troops in a combat environment.

Frank M. Rumbold, born in Meeker Grove, Wisconsin, on Jan. 4, 1862, became just such an individual. In 1886, when 4 years old, his family moved to St. Louis, where he was raised in the shadow of his physician father.

The young Rumbold chose to follow his father's medical path, but a seed of interest in military affairs was planted in 1878 when the 16-year-old enlisted as a cadet with a company of the St. Louis National Guard Battalion (which expanded into the First Regiment of the National Guard of Missouri in 1879).

Rumbold "graduated from Washington University in 1884 with the degree of doctor of medicine," noted an article in the St. Louis Post-Dispatch on June 4, 1934. "He entered practice here at once, specializing in the nose, throat and ears. For a time, he was editor and proprietor of the St. Louis Medical and Surgical Journal ... and founded another professional journal."

His medical practice progressed in tandem with service in the National Guard, and Rumbold transferred to Light Battery A in 1882, becoming its commander and captain in 1891.

Capt. Rumbold commanded the battery during several interesting events, including its participation in the burial ceremony for William Tecumseh Sherman, a well-known Union general of the Civil War. However, in 1898, the untested officer was called into service for what became the first of four military campaigns of his career.

"The prospect of trouble between this country and Spain aroused new interest in the National Guard and resulted in the accession of many new members," explained "A History of Battery A of St. Louis." "During the early spring of 1898, it was no uncommon thing on drill nights to see hundreds of spectators on the armory grounds."

In response to President McKinley's call for 125,000 volunteers to serve in the Spanish-American War, Battery A became the first of the Missouri troops mustered into service, departing for training at Chickamauga Park, Georgia, on May 16, 1898.

"On July 24 (1898), a battalion consisting of Battery A ... left Chickamauga for Newport News (Virginia), and a few days later sailed in the 'Roumanian' for Ponce, Puerto Rico," described the "National Guard Historical Annual of the State of Missouri" printed in 1939.

The battery was "loaded and ready to fire," but the war came to an end before hostilities ensued. They returned to Missouri and were mustered out of federal service in November 1898.

Imbued with an abiding interest in military operations, Rumbold resigned his commission in the National Guard to enter on active duty with the 32nd U.S. Volunteers and went on to serve in the Philippines from July 5, 1899 to May 8, 1901.

During the Philippine-American War, he revealed his command abilities in several skirmishes, even commanding a small cadre of troops in a successful attack against an overwhelming number of entrenched Filipino fighters.

The "History of the Missouri National Guard" explained, "Upon the return of Captain Rumbold from the Philippines in June 1901, he was again elected commanding officer (of Battery A in St. Louis)."

His medical career was essentially suspended in pursuit of military interests while he worked to maintain Battery A as a highly-proficient organization. In 1907, having avoided matters of intimacy much of his adult life, Rumbold married Susan McCord of St. Joseph. Tragedy arrived nine months later when his wife died from "acute indigestion and heart disease."

In the face of loss, Rumbold found solace in military endeavors. On Jan. 11, 1909, Gov. Herbert Hadley, recognizing the officer's demonstrated abilities, appointed Rumbold as the adjutant general of the Missouri National Guard.

In the next four years, under the guidance of Gen. Rumbold, the Missouri National Guard continued to grow in strength and improve upon training.

"On January 15, 1913, (Rumbold) was relieved as Adjutant General and again assumed command of (Battery A)," stated the "History of the Missouri National Guard." Later that year, affairs of the heart returned when he married Helena Abend.

Battery A, under the command of Rumbold, mustered into federal service in June 1916 and served several months in Texas during the Mexican border campaign. The battery returned to Missouri in December 1916, only months prior to returning to federal service for World War I.

Battery A was consolidated with other units during World War I to become the 128th Field Artillery with Rumbold in command. Conducting training at Fort Sill, Oklahoma, they deployed to France in May 1918. While in St. Mihiel, France, Rumbold was exposed to poison gas, leading to health problems that plagued him for the rest of his life.

The St. Louis Post-Dispatch reported on June 4, 1934, "He took (the 128th) to the battlefields of France and back, returning in February 1919, with the Distinguished Service Medal."

Sorrow returned when his second wife died in 1922, but Rumbold remained busy by serving in the Militia Bureau, followed by a brief tenure with the General Staff in Washington, D.C. He was again appointed adjutant general for Missouri, serving in that capacity from 1925-1927.

Following his retirement in 1927, Rumbold worked in the financial sector but eventually succumbed to his WWI exposures on June 2, 1934. The 72-year-old retired general was buried in Arlington National Cemetery.

Shortly after his death, the Kansas City Star penned a glowing tribute to the late general, describing a "dashing soldier" who invested the prime years of his life in support of his fellow soldiers and the Missouri National Guard.

The newspaper affirmed, "His enthusiasm was contagious and permeated the National Guard under his administration. ... Brave, loyal, generous, intelligent, a gallant soldier, General Rumbold will be remembered by all who knew him as an overflowing and picturesque personality."