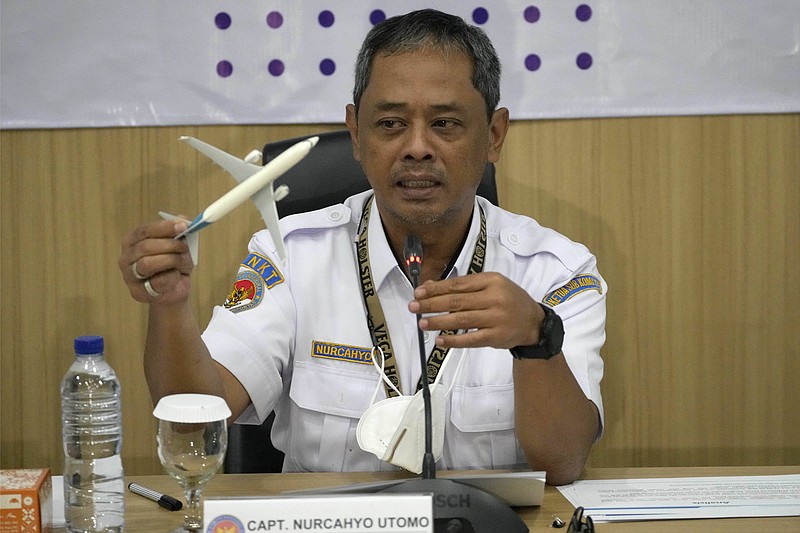 National Transportation Safety Committee investigator Nurcahyo Utomo holds a model of an airplane during a press conference in Jakarta, Indonesia, in Jakarta, Indonesia, Thursday, Nov. 10, 2022. Indonesian aviation investigators concluded in their final report Thursday that a nearly decade-long failure to properly repair a malfunctioning automatic throttle, pilots' overreliance on the plane's automation system, and inadequate training led to the crash of a Boeing 737-500 last year that killed 62 people.(AP Photo/Tatan Syuflana)

National Transportation Safety Committee investigators said in their final report that the Sriwijaya Air jet's maintenance record showed the problem with the automatic throttle had been reported by pilots 65 times since 2013 and was still unsolved when the 26-year-old plane plunged into the Java Sea after taking off from Jakarta on Jan. 9, 2021.

Lead investigator Nurcahyo Utomo said at a news conference that the pilots' last conversation with air traffic control was about 4 minutes after takeoff, when they responded to an instruction to go up to 13,000 feet. The plane's flight data recorder showed it reached an altitude of 10,900 feet and then began declining, Utomo said.

He said the plane required less engine thrust as it neared its target altitude, but that the automatic throttle was unable to reduce the right engine's power because of friction in the mechanical system.

The automatic throttle attempted to compensate by reducing the left engine's power further, cutting its output to as low as 34 percent. The right engine's power remained at its climb setting, or about 92 percent, resulting in sharply unequal thrust, the report said.

The pilot fought to bring the plane up, but "was unable to recover from the situation," and the jet rolled onto its left side, the report said.

A minute later, the flight data recorder showed that the automatic throttle had been disengaged as the plane pitched down. The recorder stopped recording a few seconds later.

Many of the problems leading to the crash were disclosed in a preliminary report issued by Indonesian authorities last year. The final report released Thursday provided new details of the pilots' response to them.

Utomo said inadequate training "contributed to the inability of the pilot to prevent and recover from the condition."

The pilots' overreliance on the plane's automation system may have resulted in inadequate monitoring in the cockpit, so that the flight deviation was not immediately noticed, the report said.

Utomo said the voice data recorder only worked on one audio channel, and another channel that was supposed to record all voices in the cockpit was filled with an unknown buzzing sound that prevented investigators from fully analyzing the coordination between the two pilots.

The report concluded that repeated attempts to repair the automatic throttle over the years had failed because they had not properly fixed the mechanical issue.

Investigators worked with Boeing and engine maker General Electric to review information from the flight data recorder. A team from the U.S. National Transportation Safety Board and Federal Aviation Administration also joined the investigation.

The plane had been out of service for almost nine months because of flight cutbacks caused by the coronavirus pandemic. Regulators and the airline said it underwent inspections before resuming commercial flights in December 2020.

The disaster reignited concerns about safety in Indonesia's aviation industry, which expanded quickly after the country's economy was opened up following the fall of dictator Suharto in the late 1990s. The United States banned Indonesian airlines from operating there in 2007 but lifted the measure in 2016, citing improvements in compliance with international aviation standards. The European Union lifted a similar ban in 2018.

Sriwijaya Air, an Indonesian domestic airline founded in 2003, has had only minor safety incidents in the past, though a farmer was killed in 2008 when a plane went off the runway while landing due to a hydraulic issue.

In 2018, a Boeing 737 MAX 8 jet operated by Indonesia's Lion Air crashed, killing 189 people. An automated flight control system played a role in that crash, but the Sriwijaya Air jet did not have that system on board. 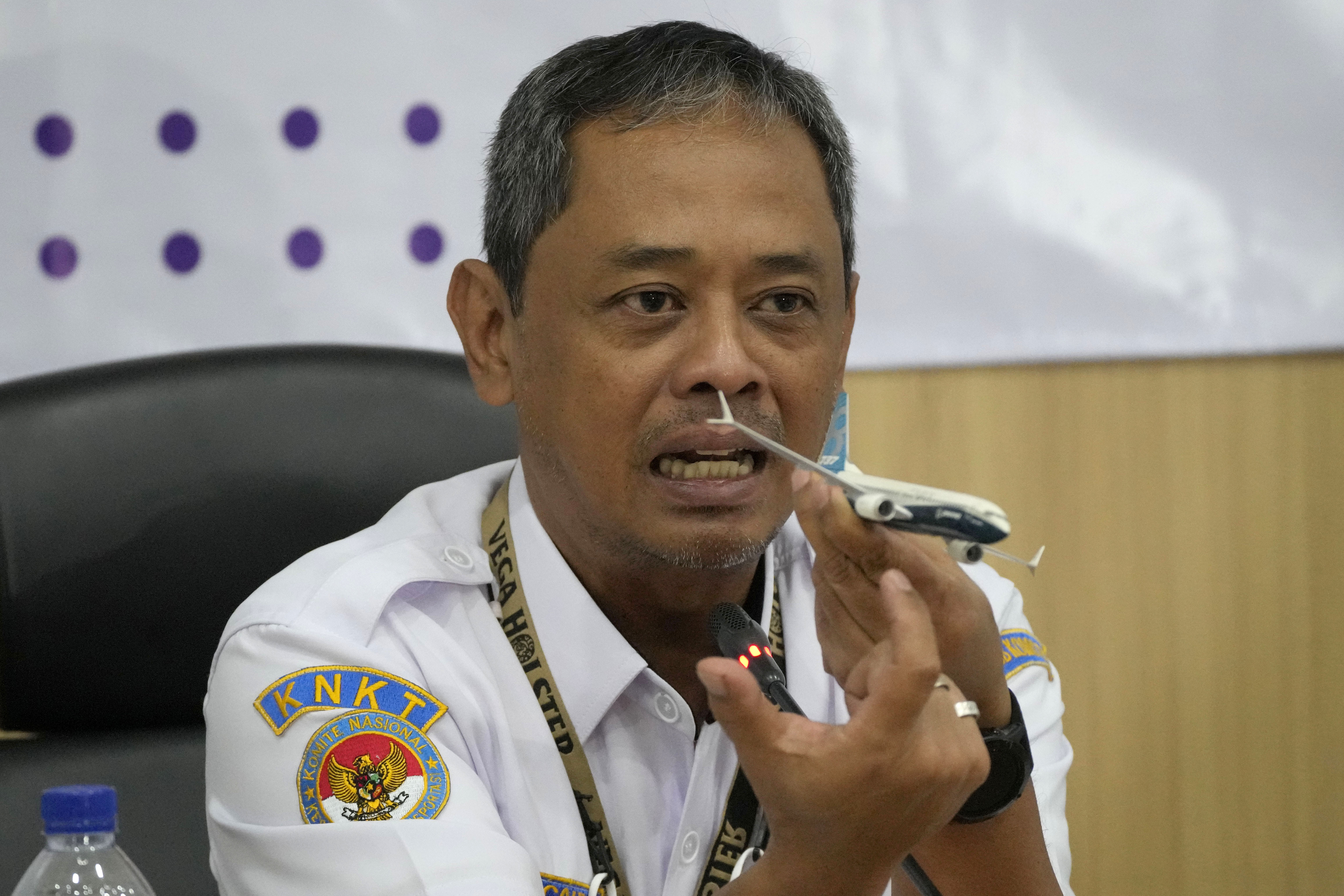 National Transportation Safety Committee investigator Nurcahyo Utomo holds a model of an airplane during a press conference in Jakarta, Indonesia, in Jakarta, Indonesia, Thursday, Nov. 10, 2022. Indonesian aviation investigators concluded in their final report Thursday that a nearly decade-long failure to properly repair a malfunctioning automatic throttle, pilots' overreliance on the plane's automation system, and inadequate training led to the crash of a Boeing 737-500 last year that killed 62 people.(AP Photo/Tatan Syuflana) 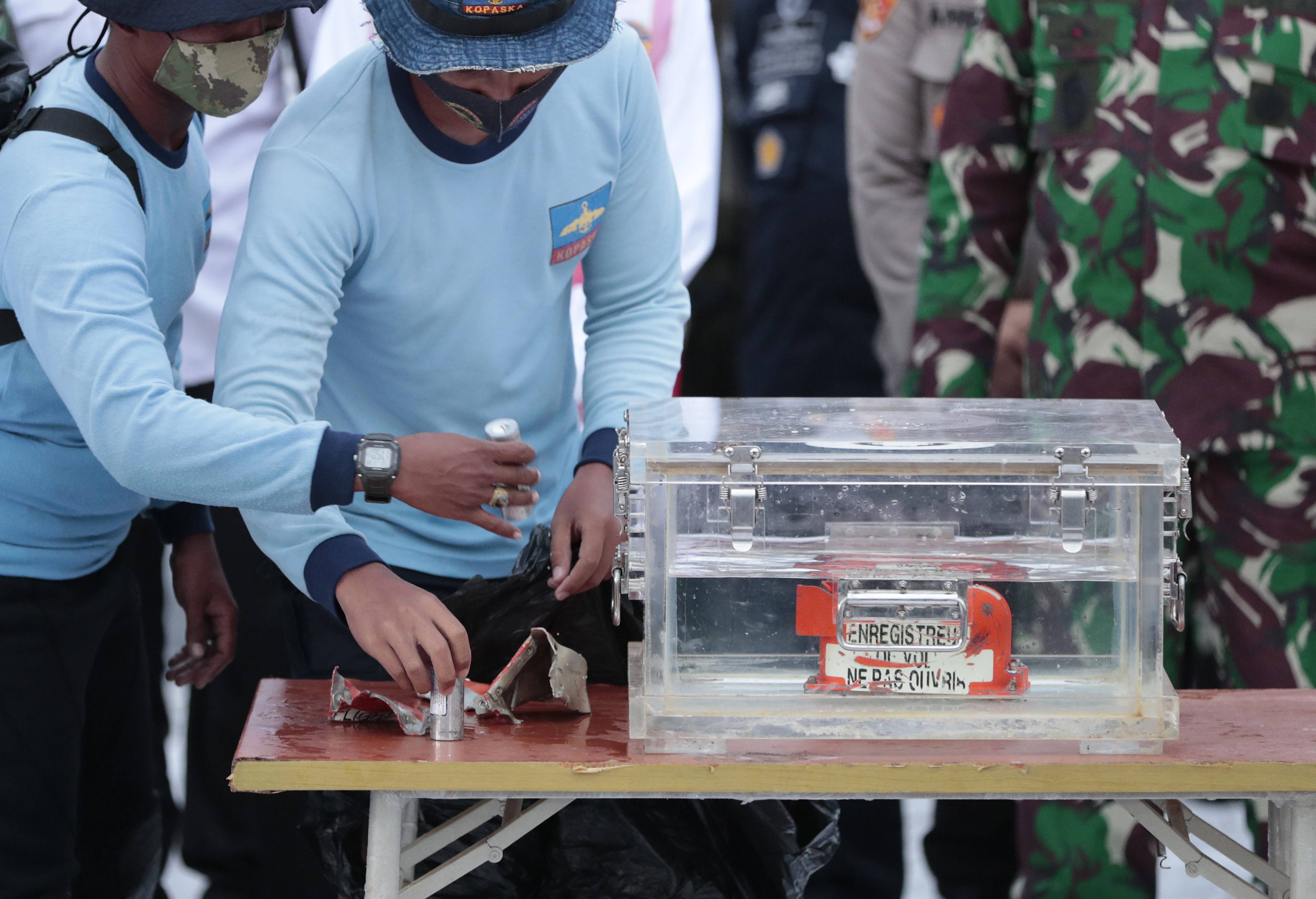