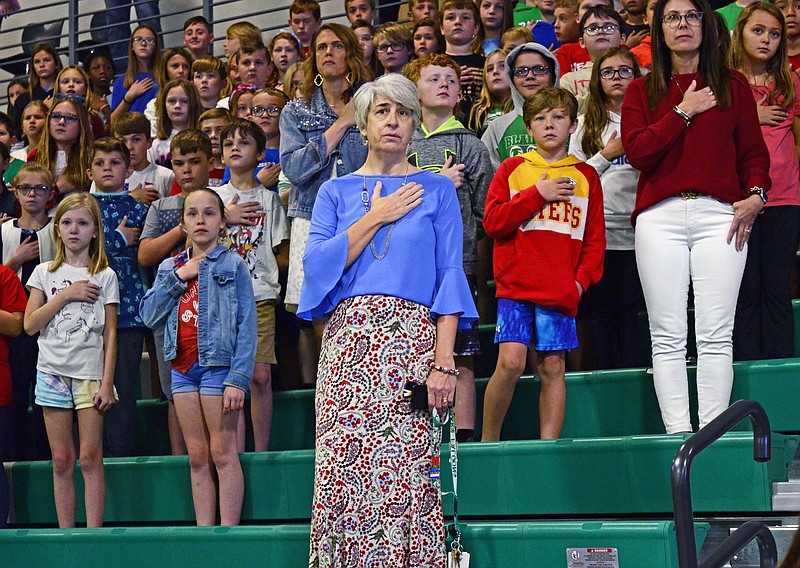 Eileen Wisniowicz/News Tribune Judy Schroeder holds her hand over her heart for the Pledge of Allegiance during Blair Oaks' Veterans Day assembly on Thursday, Nov. 10, 2022. Schroeder is a special education teacher at Blair Oaks Intermediate School.

The gym at Blair Oaks High School was packed with students decked in red, white and blue, rather than their usual green, along with parents, family members, faculty and community veterans.

The assembly began with a procession of veterans while the auditorium rang with applause, followed by choir performances of "God Bless the USA" and the national anthem.

Students read "letters to a veteran" sharing their thanks for the sacrifices of those who served.

The speaker for the event was Col. Jack Jackson, a former Marine Corps aviator who served in Vietnam and is a former state representative. Jackson spoke on the 247th birthday of the Marines.

Jackson shared life lessons with students by calling volunteers up front to wear different pieces of his flight gear. Each component represented a different life lesson.

After a student donned a flight suit meant to withstand fires, Jackson told students: "Life is going to throw some pretty nasty things at you, and I fully expect you to resist them. You can do it."

Another student wore a torso harness that would attach to the parachute used when a pilot is ejected from an aircraft.

"We make mistakes in life, and life may shoot you down, and you may have to eject. You may make a wrong decision. But I'm telling you, that's not the end of the world if you've done it."

You may not be able to reverse your mistake, but the story's not over there.

"Once you've done it, you've pulled that parachute handle. You can't go back ... but the beautiful thing about it is you have a parachute that's going to let you down," Jackson said.

Jackson also took the opportunity to thank the veterans in attendance.

The choir sang "American Tears" accompanied by a sign language interpretation from members of the high school American Sign Language 3 class, and the band played a military medley recognizing each branch of the service before dismissing.

People were asked to stand if they were a veteran, an immediate family member was a veteran, or if a grandparent or other loved one was a veteran. That left most of the gym standing.

Sgt. Tyler DuPont of the National Guard told the story of how the words of the national anthem were written by Francis Scott Key during the war of 1812. Key was inspired by the image of the American flag still flying after British bombardment. Many had died to keep that flag flying, DuPont said.

Throughout history, DuPont said, there are many examples of American soldiers fighting against suffering and fighting for good in the world.

"Not long ago, somebody asked me, what was the greatest generation of soldiers that had the best positive impact on our country?" he said. He could not decide on an answer at the time, but later came up with one.

"The answer is, and should always be, the generation who serves tomorrow," he said.

Lepper explained that Veterans Day may hold a lot of meaning for veterans -- some see it as a time of reunions and remembrance of the victories and hardships they've endured. For others, it may be more painful and difficult to talk about memories.

"We owe a permanent debt of gratitude to all the veterans of the United States of America," Lepper reminded students.

Student body president Cora Wood also shared her father's story. Bill Wood, a navy veteran, was unable to attend the assembly but shared some remarks through his daughter. During his time in the Navy, Bill Wood had taken a Jefferson City Jays flag aboard a submarine to the North Pole. That flag was presented to the high school principal, Deanne Fisher.

Fisher also recognized several members of the staff who had served or are currently serving the armed forces.

Eileen Wisniowicz/News Tribune Ben Wilbers, 17 plays in the trumpet line during the Blair Oak's Veterans Day assembly on Thursday, Nov. 10, 2022. All of the Blair Oaks schools packed into the gymnasium to honor veterans from the community. 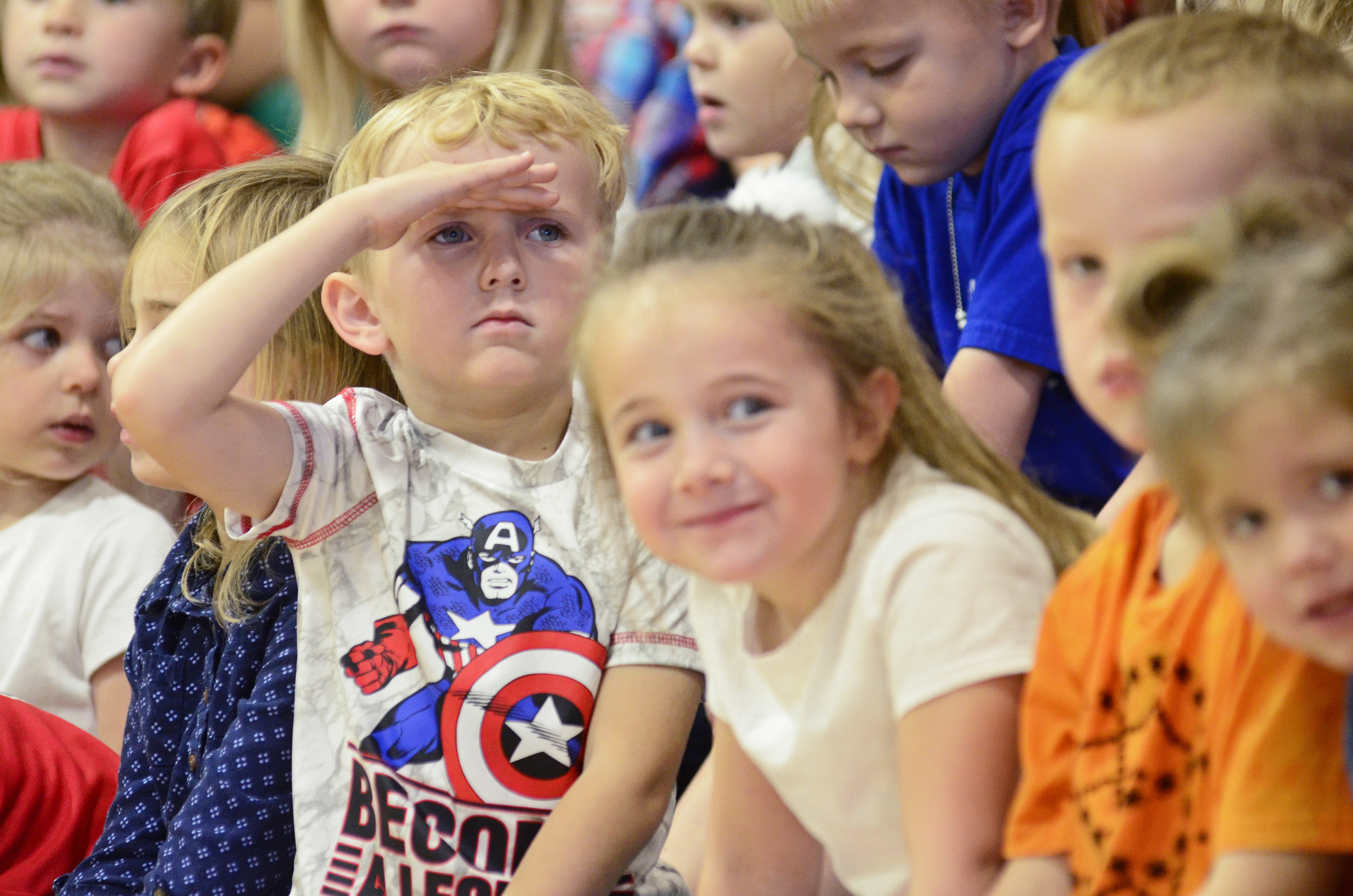 Eileen Wisniowicz/News Tribune Lincoln Toettcher, 5, salutes as the band played 'God Bless the USA' during the Veterans Day assembly on Thursday, Nov. 10, 2022 at Blair Oaks High School in Jefferson City. Toettcher is in the preschool program at Blair Oaks and held his salute for the entirety of the song.

Eileen Wisniowicz/News Tribune Anna Wekenborg, a senior at Blair Oaks high school, laughs while wearing a flight helmet during the school's Veterans Day assembly on Thursday, Nov. 10, 2022. The gear was from the guest speaker Colonel Jack Jackson's time as a combat aviator. 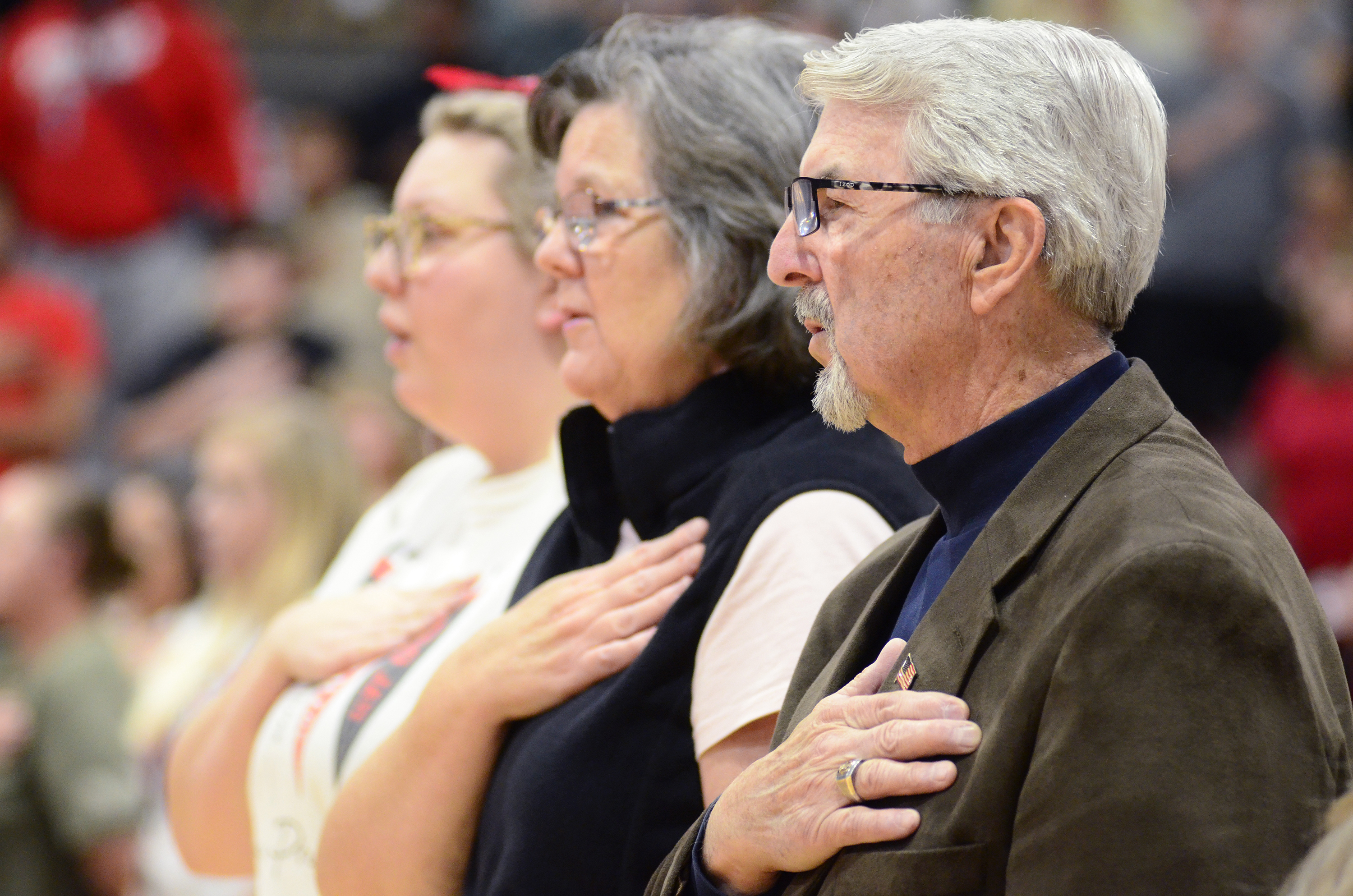 Eileen Wisniowicz/News Tribune From right, Daniel Lepper, Leigh Lepper, and Elizabeth Swanigan place their hands over their hearts for the Pledge of Allegiance on Thursday, Nov. 10, 2022 at the Jefferson City High School Veterans Day assembly. Daniel Lepper who served in the military was invited as a guest speaker. 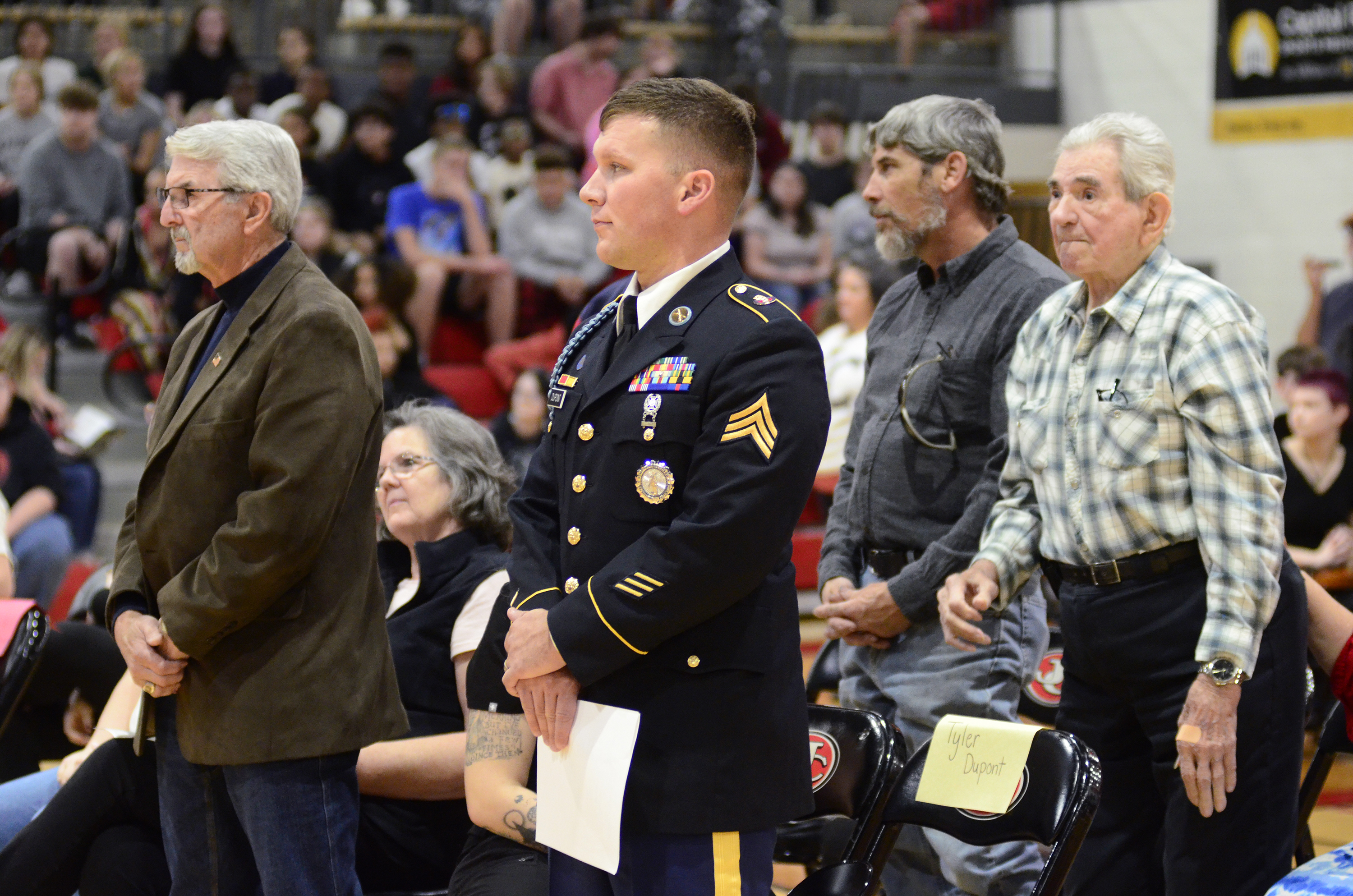