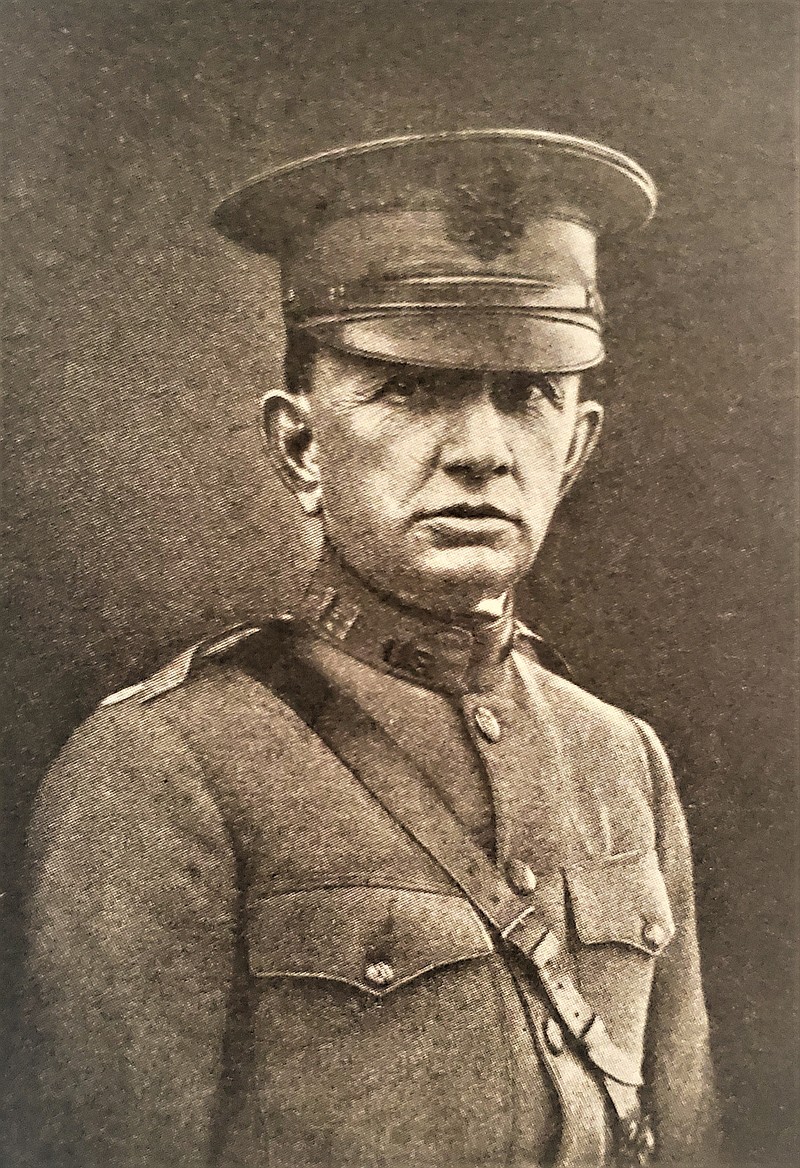 The history of the Missouri National Guard is teeming with stories about dedicated men and women who ascended to the pinnacle of their military careers, oftentimes revealing their leadership abilities in a combat environment. What makes their experiences more impressive is when these citizen-soldiers capably balanced demanding jobs in the civilian workforce all while maintaining their commitment to family.

This legacy includes the late Edward Stayton. Born in 1874, he attended rural schools in Jackson County before finishing high school in Independence. Months prior to his 17th birthday, he enlisted in Company F, 3rd Missouri Infantry Regiment in Kansas City, beginning a lifelong interest in military affairs.

"In 1892, he became a student in the Missouri State University, in which he pursued a special course in civil engineering, and he also took an active and helpful interest in the military department of the university," noted the "Centennial History of Missouri."

As a student and cadet at the university, Stayton revealed his talent for leading soldiers, quickly earning promotion to sergeant major of his training battalion. The St. Louis Globe-Democrat, on Dec. 20, 1893, reported the governor of Missouri appointed Stayton a second lieutenant in the Missouri National Guard.

The following year, he assumed command of a company of troops in the Missouri National Guard, receiving promotions and performing his military duties as a part-time soldier. After completing his education in civil engineering, he was employed full-time with the Kansas City Southern Railway and eventually became a resident engineer.

In 1898, he married the former Estella Compton, whom he met in his youth; the couple later raised one son, George. Stayton's civilian endeavors included employment with several railroad companies. His work included a trip to Honduras in 1904 to assist with the construction of railroads used for the transport of timber and bananas.

"The Independence High School Cadet Club has grown so fast that it will soon have to procure more guns," reported the Kansas City Star on June 7, 1906. Stayton, who was at the time a captain, spent two years with the school's club training youth in various military competencies.

In 1916, Stayton was employed as the highway engineer for Jackson County when he received his first set of federal activation orders. The "Report of the Adjutant General of Missouri: January 1, 1917-December 31, 1920," explained that Major Stayton "commanded the First Battalion, Missouri Field Artillery," during the Mexican Border War in 1916.

Stayton's battalion returned to the states in December 1916, and he soon established the First Missouri Engineer Battalion, representing the first engineers in the Missouri National Guard. Within six days, he recruited the necessary soldiers to fill the new Kansas City-based battalion.

"The battalion went to the state mobilization camp near Nevada (Camp Clark) on August 5, 1917 ...," explained the "Report of the Adjutant General of Missouri: January 1, 1917-December 31, 1920." Further clarifying preparations made for service in World War I, the report added, "Consolidated upon arrival at Camp Doniphan with the 1st Kansas Engineer Battalion, it became the 110th Engineers."

The 110th Engineers, under the able leadership of Stayton, remained in federal service and deployed to France from May 11, 1918, to April 15, 1919. They participated in several major engagements of the war to include the Meuse-Argonne Offensive, suffering 40 soldiers killed and 233 wounded.

Much of their assigned work under combat conditions consisted "largely of road repairs and the camouflage and screening of roads," stated the "History of the Missouri National Guard" published in 1934. However, Stayton and his engineers often demonstrated their mettle by taking up defensive positions on the front lines when infantry troops sustained significant losses.

Mustering out of federal service at Fort Riley, Kansas, on May 3, 1919, the 110th Engineers transitioned to the 110th Combat Engineer Regiment. In recent years, it became part of the 110th Maneuver Enhancement Brigade and remains a component of the Missouri National Guard. Stayton returned to his full-time duties as a consulting engineer and continued military training in a part-time capacity.

The combat veteran was active in the formation of the American Legion and was elected the organization's state commander for the year 1925-1926. Ever seeking ways to perpetuate the memory of those who sacrificed their lives in World War I, he also served as a member of the Liberty Memorial Association, which erected a museum and war memorial in Kansas City.

In a testament to his abilities and drive, Stayton made the journey from private to flag officer, retiring in 1938 as a major general after having been in command of the 35th Division. He was 79 years old when he died in Independence in 1954, and was laid to rest in the city's Woodlawn Cemetery.

Gen. Stayton lived his life embracing the ideals of service to his nation as a soldier while at the same time recognizing the harmonious relationship that must also be established with regard to his perceived responsibilities as a citizen.

"A good soldier is certain to be a good citizen when he reverts to civil life," remarked Stayton in a recording made a few years prior to his death.

He added, "It has always been a source of gratitude to me that the members of our regiment, when discharged, immediately adjusted themselves to civil life and took on the responsibilities of citizenship, taking their places in community affairs and rising to high places in business and the professions."