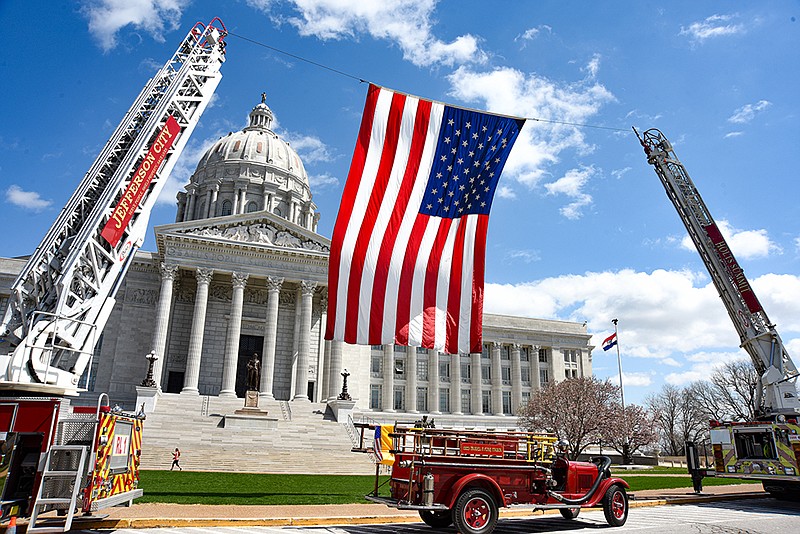 The United States flag is hoisted by two firetrucks Tuesday, April 5, 2022, during Firefighter Day in front of the Missouri Capitol in Jefferson City. (Julie Smith/For the FULTON SUN)

Republicans maintained their supermajority in both chambers of the Missouri General Assembly after Tuesday's election.

Republicans have maintained control of both chambers for the past two decades.

All 163 House seats were up for election on Tuesday, while only even-numbered districts in the Senate were. The House has 49 entirely new representatives and the Senate has eight.

All eight new additions to the Senate came from the Republican Party. The partisan divide of the upper chamber is the same with Democrats holding a 10-member minority. A total of nine Senate incumbents won their reelection bids Tuesday.

Travis Fitzwater is one of the Senate's new Republican members, taking the place of term-limited Sen. Jeanie Riddle in the 10th District. The Holts Summit businessman defeated a Libertarian opponent Tuesday with 44,040 votes (77.640 percent).

Fitzwater said meeting with the Senate's Republican Caucus is his first priority.

"I look forward to getting started in January but I think it starts with figuring out what the agenda is for all these new senators and for the senators that are there, and how we get the things done that Missourians are begging us to get done," he said.

Senate Republicans plan to caucus today to set priorities and select leadership for next session. Sen. Mike Bernskoetter, R-Jefferson City, has thrown his hat in the ring to become majority floor leader, the second most powerful position in the Senate after president pro tem.

Democrats picked up a few seats in the Missouri House.

Last session, the makeup of the House consisted of 106 Republicans, 48 Democrats and nine vacant seats.

According to unofficial election results, Republicans gained five seats in the House while Democrats picked up four. No vacancies remain.

A total of 114 House incumbents won re-election. Eighty-nine of the 163 seats on the ballot Tuesday were unopposed.

Rep. Willard Haley, an Eldon Republican, was one of them. After defeating a primary challenger with more than 72 percent of the vote in August, he sailed to re-election Tuesday with 10,514 total votes (100 percent).

Republicans Dave Griffith of Jefferson City, Rudy Veit of Wardsville and Bruce Sassman of Bland also won reelection Tuesday. Griffith, the only one with a Democrat challenger, captured 62.228 percent of the vote in his district. Veit and Sassman received 100 percent of the votes in each of their districts.

Jim Schulte, of Holts Summit, is one of 36 Republican newcomers to the House.

The majority floor leader is the second most powerful position in the House as it decides which bills get debate time. Rep. Dean Plocher, R-St. Louis, currently serves in the position but will be moving to become speaker of the House next session.

In addition to the state Legislature, Republicans continued to dominate statewide elected offices and the state's representation in the U.S. House of Representatives after the midterm election.

Republicans control all statewide elected offices and both U.S. Senate seats. Gov. Mike Parson, a Republican, is responsible for appointing a new treasurer and attorney general. His office has not released details regarding when those positions will be filled.

Republican Congressman Blaine Luetkemeyer was reelected to serve an eighth term in the U.S. House. The 3rd District representative garnered 180,358 votes Tuesday and beat his Democrat challenger with 65.099 percent of the vote.