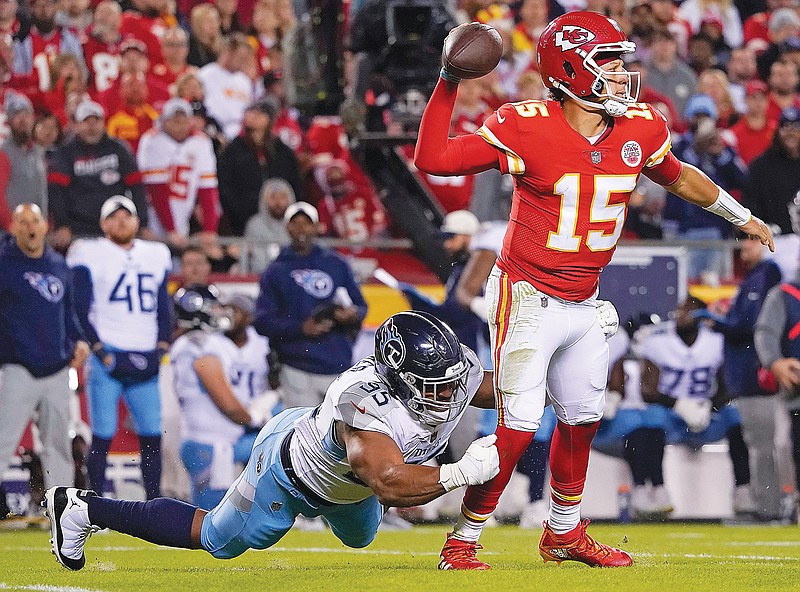 Chiefs quarterback Patrick Mahomes drops back to pass as Titans defensive end DeMarcus Walker tries to bring him down during Sunday's game at Arrowhead Stadium in Kansas City. (Associated Press)

That doesn’t mean he wants to do it again.

Mahomes was 43-of-68 for 446 yards with a touchdown and an interception in the 20-17 victory, and he even ran for the tying touchdown and 2-point conversion late in regulation. It was the most passes Mahomes, who was known for his high volume at Texas Tech, had thrown in an NFL game by 14 and beat his highest completion total by six.

“The game got a little out of hand as far as throwing the ball a little more than we wanted to,” Mahomes acknowledged, “but it called for that. You’ve seen in some games we’ve had to run it a lot. It’s something you have to do as an offense in order to succeed in this league. You have to be able to do both.”

Yet the Chiefs totally abandoned the run against the Titans, whose defensive front is among the league’s best. Their running backs combined to run 13 times for 14 yards as the Chiefs ran 91 offensive plays, one off their franchise record.

“I knew we had a lot of plays, period,” Chiefs coach Andy Reid said. “Look, we’re going to do what we needed to do to win the game. That’s what we felt. That’s how we went about it. If the run game was going, we would have done more with the run game. The pass game stalled a little in the middle, but we picked it up after that.”

Yet despite dropping back roughly 80 times, taking into account penalties, Mahomes said he didn’t do anything out of the ordinary in his recovery as the Chiefs turned their attention to Sunday’s game against the Jacksonville Jaguars.

“Ever since I’ve been young,” he said, “I never really got sore, even when I pitched when I was younger. We do stuff with my trainers, but other than that, I just try to keep my arm strength up and keep rolling.”

Mahomes is the most famous product of the “Air Raid” system designed by Mike Leach and implemented again by Kliff Kingsbury at Texas Tech. But even during those heady days with the Red Raiders, when Mahomes had 12 games where he attempted 50 or more throws, he only eclipsed his number from Sunday night once: He went 52-of-88 for 734 yards and five touchdowns in a memorable 66-59 shootout loss Oct. 22, 2016, to Baker Mayfield and Oklahoma.

Mahomes only eclipsed his completion total from last weekend twice: That game against the Sooners and a game against Kansas State a couple of weeks earlier, when he was 45-of-62 for 504 yards and two TDs in a 44-38 defeat.

“He’s electric,” Jaguars coach Doug Pederson said. “He’s a guy that can extend plays. He gets the ball out of his hands so fast it’s hard to get to him. He’s kind of the heart and soul of that offense, tough to defend and tough to play against him, and I definitely appreciate how he plays the game. He plays it the right way.”

Notes: WR Mecole Hardman did not practice Wednesday because of an abdominal injury. Hardman has caught TD passes in each of his past three games with five total touchdowns over that span. … Chiefs DB Trent McDuffie said he came out of his first game since Week 1 in good shape. The first-round pick hurt his hamstring in Arizona and landed on injured reserve.