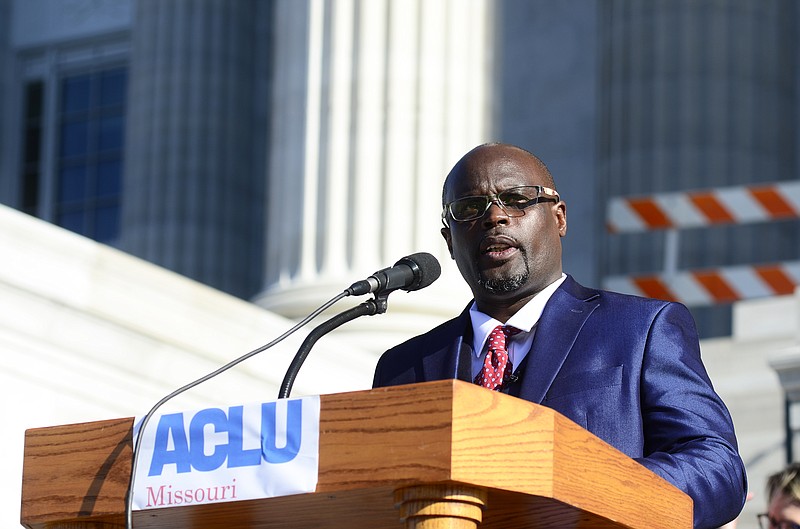 Eileen Wisniowicz/News Tribune photo: Bobby Bostic spoke publicly for the first time since being granted parole at the Missouri State Capitol on Wednesday, Nov. 9, 2022. Bostic's first words upon reaching the podium were, "I’m Bobby Bostic, and I stand here a free man today."

Bobby Bostic stepped up to a podium on the steps of the Missouri Capitol on Wednesday morning and spoke into the microphone a sentence he had been waiting 27 years to say:

Bostic had been in prison since 1995, when he was 16 years old. He and an 18-year-old man committed several robberies in his hometown of St. Louis during the course of one evening, and though no one was seriously injured during the spree, Bostic was tried as an adult and sentenced to 241 years in prison, with his first opportunity at parole when he reached 112 years old. The other man accepted a plea deal for 30 years in prison.

Circuit Judge Evelyn Baker, who handed down the sentence, said she felt at the time he would not be able to be rehabilitated. But during his incarceration, Bostic earned his GED, an associate's degree and an assortment of other certificates from institutions. He has helped fellow detainees pursue education as well, according to his advocates, and has written several books.

Supporters rallied for clemency for years, including a bipartisan push from Missouri lawmakers. That effort, supported by the ACLU of Missouri and other groups, eventually led to new state legislation enacted last year, which allowed offenders sentenced to 15 or more years as a minor for non-homicide crimes to apply for parole after 15 years of imprisonment.

Bostic's was one of the first hearings under the new policy, and he won parole in December. He has since undergone courses to ease his transition back into the outside world and was released Wednesday morning at age 43.

During a press conference Wednesday morning flanked by family, friends and advocates, Bostic thanked them for their support and pledged to devote the next phase of his life to helping youths who might face similar trouble, be it through housing and clothing or education and support.

"I take responsibility for the crimes that were committed 27 years ago when I was just a teenager," Bostic said. "It is a weight that I will carry for the rest of my life. While I cannot change what happened so many years ago, I will mentor and teach young people to take a different path."

Marquise Bostic, his sister, leaned her head against his shoulder throughout the conference. She and others wore shirts proclaiming "Bobby Bostic is Free."

"My brother has gone from a troubled teenager battling addiction to an intelligent, educated man seeking to help others," she said. "We lost a brother, a son and an uncle for 27 years, but we are all here to show our love and support as this chapter closes."

During his parole hearing, Bostic was allowed to bring one advocate -- and he chose Baker, who had become one of his biggest advocates when his legal team unsuccessfully petitioned state courts, including the Missouri Supreme Court, for an opportunity for release.

Baker, now retired, said she hadn't expected Bostic to live more than five years after he was sentenced and that she had since resolved to fight for his release.

"He decided to do everything that was available around him to make himself a better person. And he did so," Baker said. "He stands in front of you today the kind, loving and caring man. I think this should have happened 10 years ago or more, but I'm glad it happened. Bobby will make this world a much better place."

While much of the press briefing focused on the pain of the past and the joy of the present, Bostic and advocates also addressed the future. Tony Rothert, ACLU of Missouri director of Integrated Advocacy, said the system had failed Bostic even before his incarceration, punishing him during his troubled youth rather than attempting to guide him toward success.

"Let's make no mistake: Whatever role our government played in making Mr. Bostic who he is today, it does not make up for Missouri's failures," Rothert said. "All of us today, recommit to crashing that school-to-prison pipeline, starting by writing off young children with troubles by sending them away from school, rather than providing them the opportunities they deserve."

As for Bostic, he plans to return home to a very different St. Louis from the one he once lived in. While he is focused on educating youths with plans to speak at local schools and work with nonprofits across the state, he also said he had much to learn from the younger generation -- Wednesday was the first time he had used a cellphone, he said.

He also hopes to publish an autobiography as his next book, capping off the story with a depiction of his first few weeks outside of prison while looking toward the next chapter of his life.

"My story should serve both as a cautionary tale and a message of hope to others serving time to not give up on yourself," he said. "It's always possible to get out and turn your pain and regrets and sorrow into making yourself a better person, so that you can become your own best advocate -- because at times, you might be your only advocate." 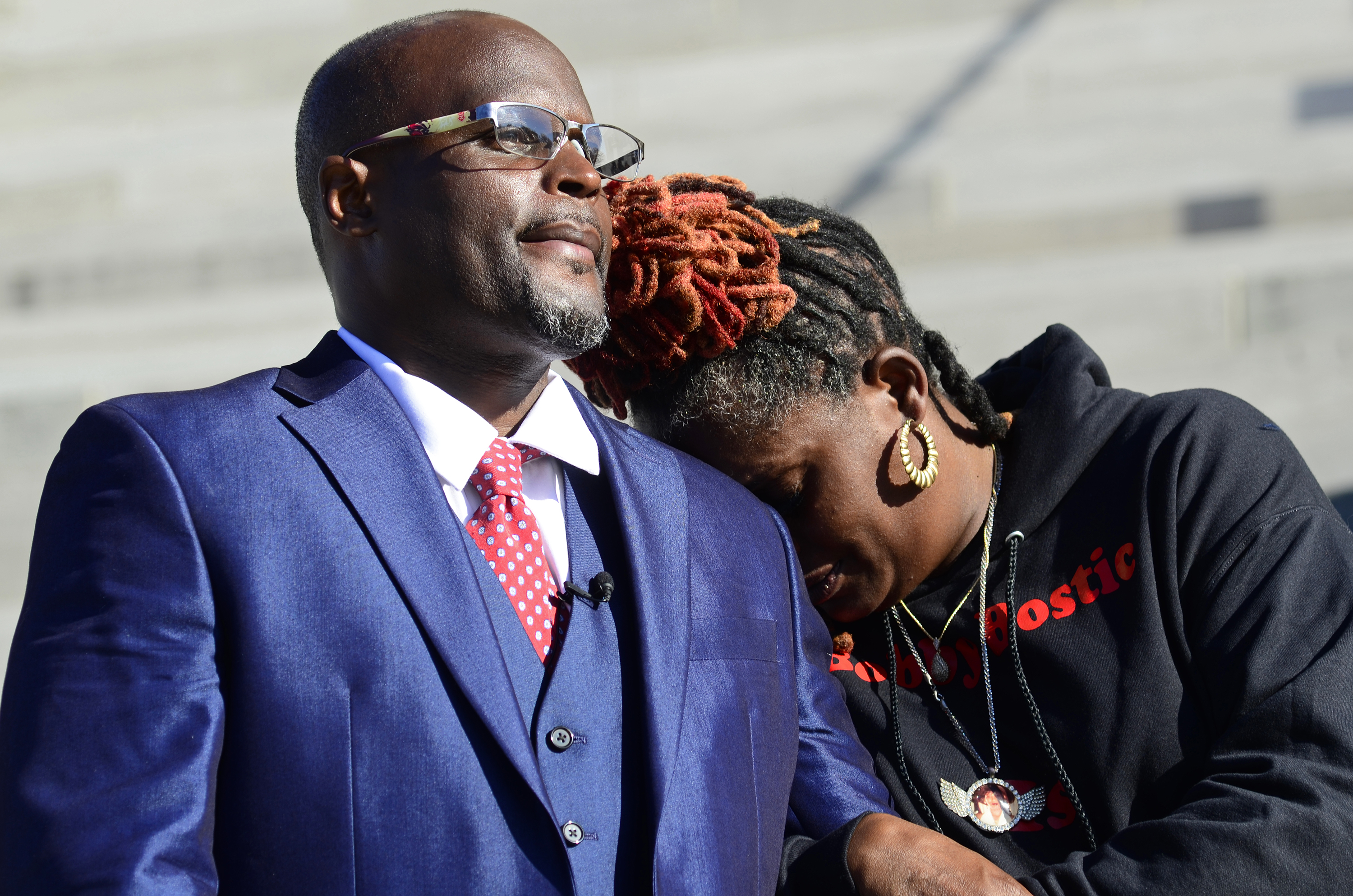 Eileen Wisniowicz/News Tribune photo: Marquise Bostic lays her head against her brother, Bobby Bostic, on Wednesday, Nov. 9, 2022 at the Missouri State Capitol in Jefferson City. Bostic received parole after being given a "de facto life sentence" at the age of 16. Marquise spoke at the event and said that Bobby's going away hurt more than just the victims, it hurt their family too. 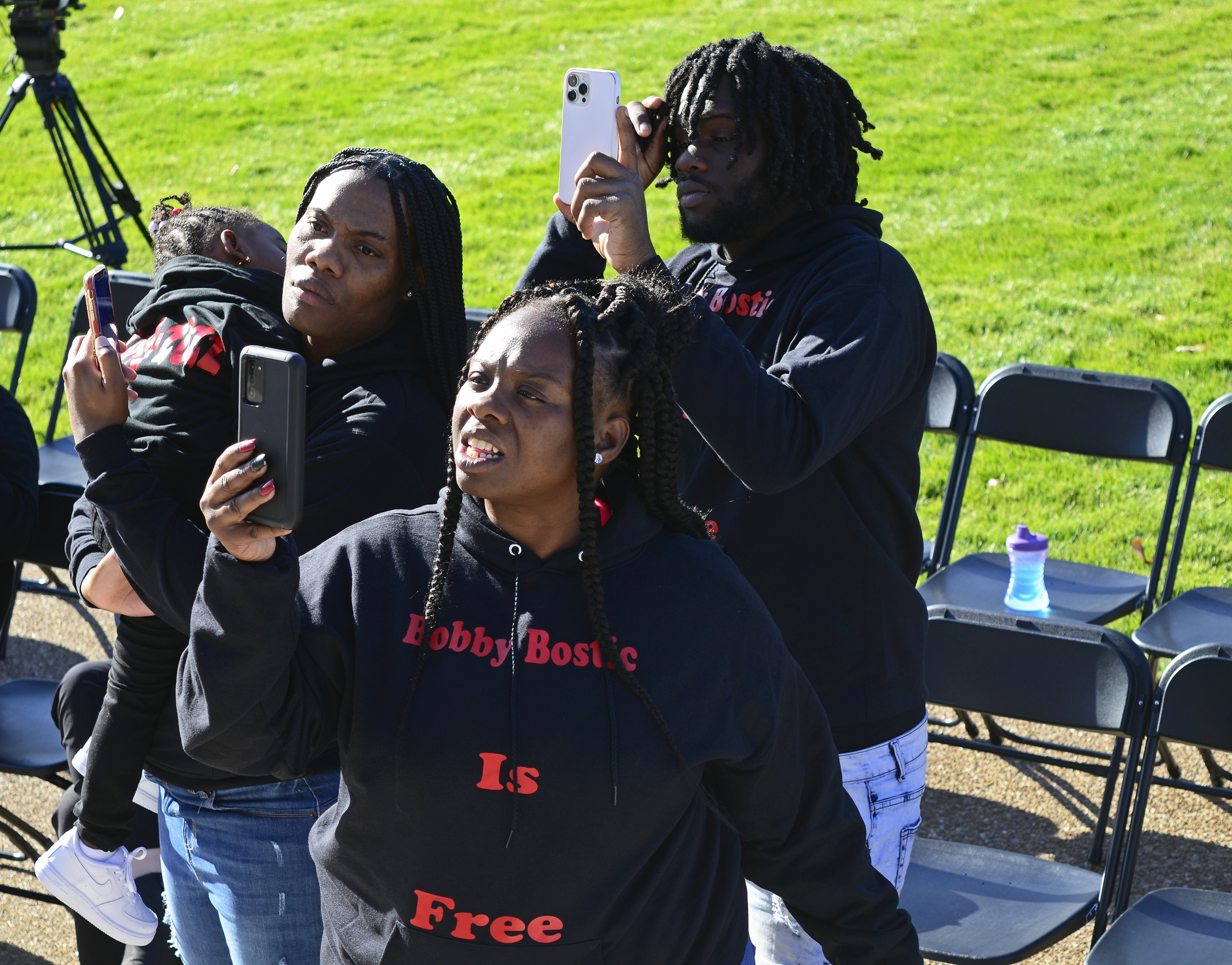 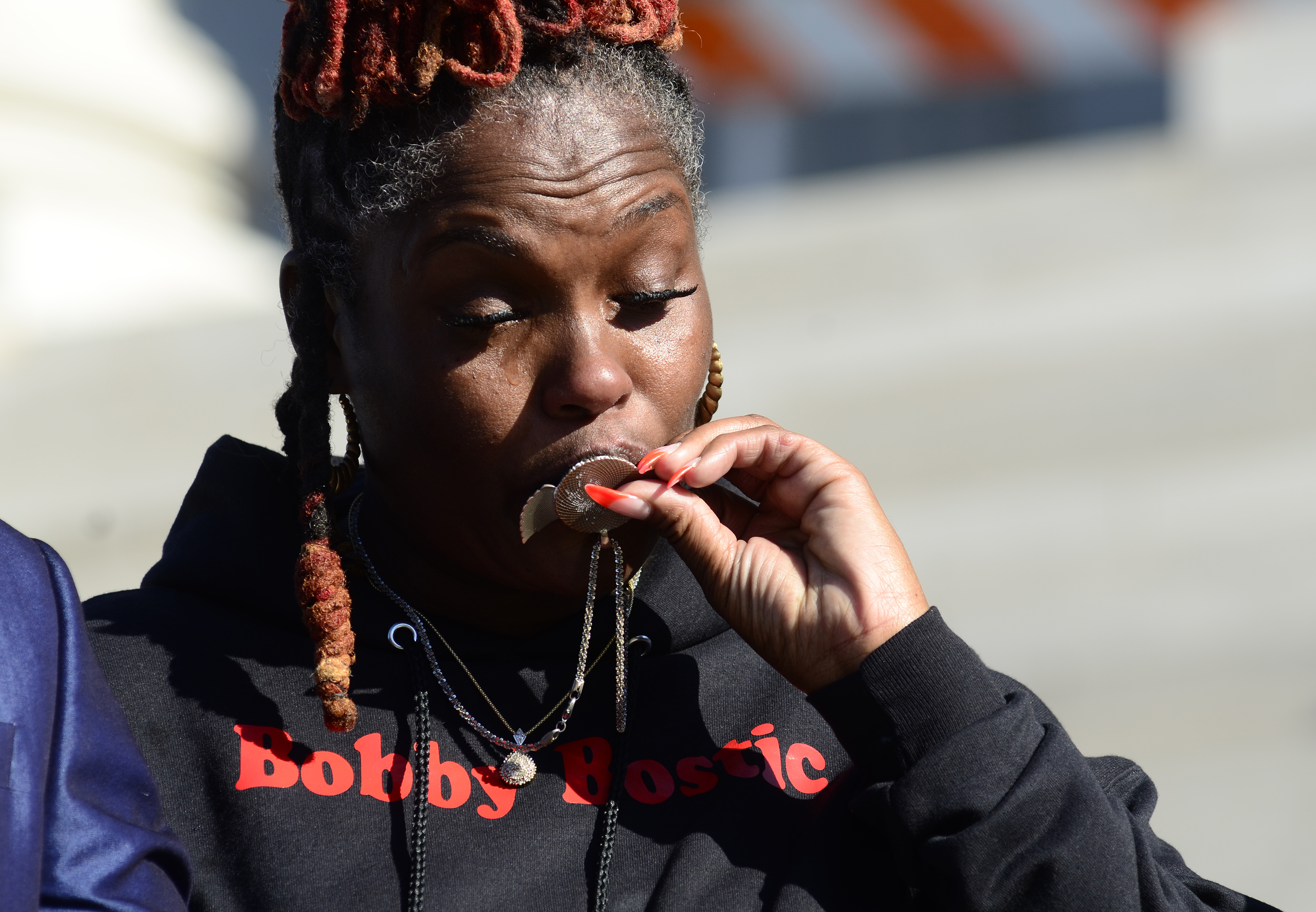 Eileen Wisniowicz/News Tribune photo: Marquise Bostic kisses her necklace which holds a photo of her and Bobby Bostic's mother, Diane Bostic-Brown, on Wednesday, Nov. 9, 2022 at the Missouri State Capitol. Diane passed away due to cancer before she could see her son walk free. Bobby was released from prison on parole after being given an original sentence of 241-years for a nonhomicidal crime he committed at age 16 . 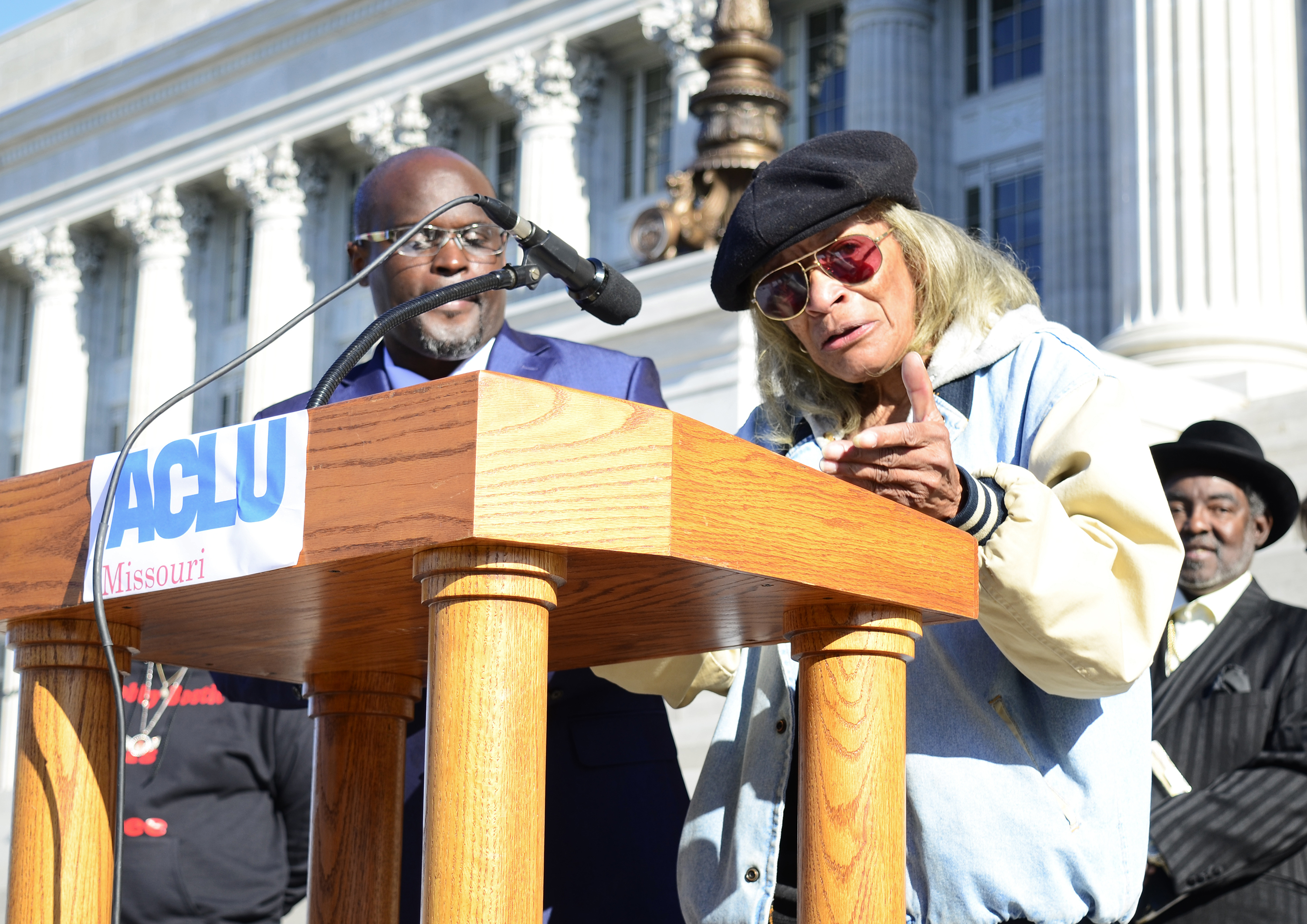 Eileen Wisniowicz/News Tribune photo: Retired Judge Evalyn Baker answers a question about the sentence she gave to Bobby Bostic at age 16 and how she came to be his biggest supporter on the steps of the Missouri State Capitol in Jefferson City. Baker said that later on in life she learned how brain development works and regretted that she charged Bostic like an adult.