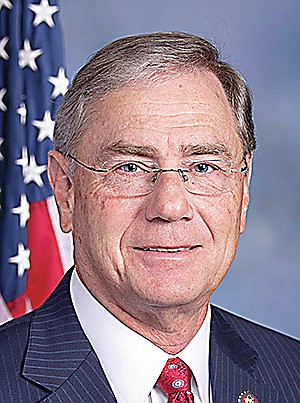 Republican incumbent Blaine Luetkemeyer sailed to victory Tuesday as voters elected him to an eighth term in the U.S. House of Representatives.

The 3rd Congressional District sprawls from the eastern border of the state north of St. Louis to the western edge of Cooper County. It encompasses part or all of 16 counties and has a population of about 769,364, according to the state's redistricting office.

Luetkemeyer has been a Congressman since 2009, first representing Missouri's 9th Congressional District before redistricting moved him to the 3rd District, which he has represented since 2013.

The incumbent has picked up at least 65 percent of the district's vote in every election since 2014. He defeated three Republican primary opponents with more than 69 percent of the vote in August.

Luetkemeyer was largely focused on economic issues throughout the campaign season, taking particular aim at reducing federal spending, getting people back to work and addressing inflation.

He spent more than $2.37 million on his re-election bid this year, according to Oct. 27 campaign finance filings with the Federal Election Commission. It was more than 208 times the amount Mann spent running for Congress, which was more than $11,300 according to the Oct. 27 filing.

Mann ran on a message of change and social development.

She said Missouri was falling behind in making critical infrastructure developments, such as broadband, providing students quality education, particularly in STEM areas, and ensuring working class families are supported.

"I am tremendously proud of the race that I ran alongside a fantastic team, not just my own team but people from all across the district who showed up and supported their community," Mann said. "I'm really proud that Missouri's 3rd District had a candidate who met with constituents and ... who really gave a voice to the stories and the people in Missouri's 3rd District because they deserve good representation."

Mann said she plans to run for Congress again in 2024.

Upon returning to Congress, Luetkemeyer said the Republican Party will be focused on legislating and providing oversight on the Biden administration.

He supports the Commitment to America plan offered by Republican leadership in the House and said he expects the executive branch to legislate through regulation.

"We've got to make sure that those regulations are not so impactful that they turn our country the wrong direction again," Luetkemeyer said. "So it's going to be up to us to point those out, stop it from happening, make sure it's done properly, if it does get done, and allow people to participate in this process."