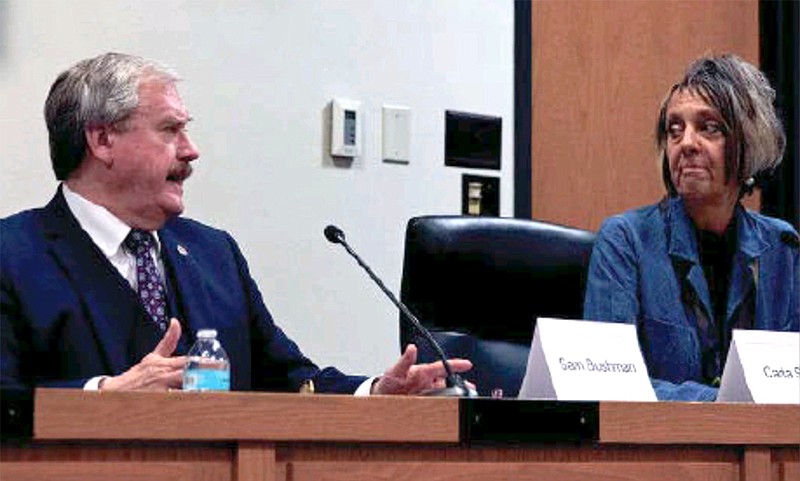 In the only contested race for a countywide office, Bushman beat Independent challenger Carla Malone Steck by 13,364 votes. The unofficial totals put Bushman at 20,369 votes (74.41 percent) and Steck at 7,005 votes (25.59 percent).

"I want to thank the citizens of Cole County that have enough faith in me to elect me for another four years," Bushman said. "I'm really appreciative."

Bushman went into election night with eight years of service as presiding commissioner under his belt and more than $2,000 more in campaign finance contributions than Steck. His re-election platform was focused on finishing the county projects he started and continuing to advance the county's priorities.

About the people who voted against him, Bushman said, "There's always going to be some people who don't like me, but they're not enemies to me. They're still my constituents that I care for, and I'm always available for them to bring their concerns."

Steck was running for what would have been her first term as presiding commissioner. The focus of her platform was increasing transparency and public access to the commission.

Steck did not respond to requests for comment on the outcome of the election.

There were seven other Cole County officials on the ballot. All of them ran unopposed.

Voters in St. Martins voted not to pass a measure to impose a local use tax at the same rate as the total sales tax rate.

Cole County voters decided on a number of statewide elections as well:

• In the race for U.S. representative for District 3, Republican Blaine Luetkemeyer received 70 percent of the vote and Democrat Bethany Mann received 29 percent.

• For state senator of District 6, Republican Mike Bernskoetter was the sole candidate.

• For state representative for District 59, Republican Rudy Veit was the sole candidate.

• For state representative for District 60, Republican Dave Griffith got 62 percent of the votes and Democrat J. Don Salcedo got 37 percent.

• Voters voted 69 percent "no" on holding a constitutional convention.