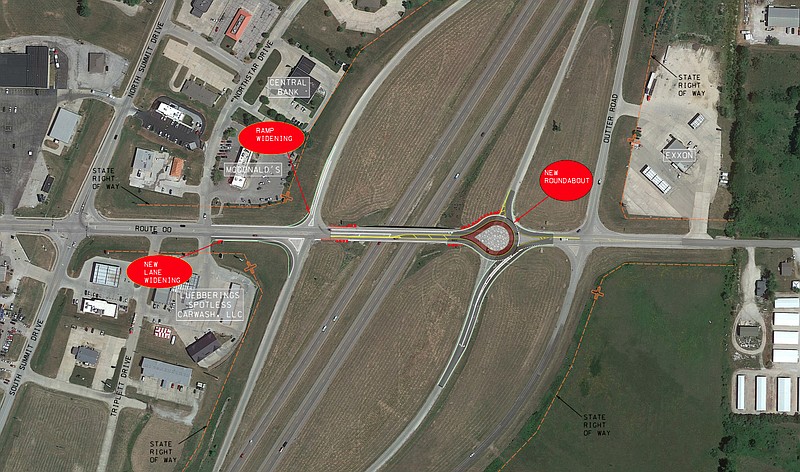 The Missouri Department of Transportation is considering building a roundabout for the east side ramps on the U.S. Route 54 and Route OO interchange in Holts Summit. (MoDOT graphic)

A roundabout may replace a part of the U.S. 54 and Route OO interchange in Holts Summit.

The department released details on proposed changes to entrance and exit ramps along U.S. 54 in Callaway County Monday. It's requesting online feedback on the proposed project through Nov. 30 and will be hosting a meeting to discuss the changes Dec. 1.

A roundabout would replace the intersection where eastbound 54 exit and entrance ramps meet Route OO. The new layout is intended to improve traffic flow and safety at the ramp intersections, according to the department's project page.

The project, which totals more than $2.6 million and is slated to start in May 2023, also includes intersection improvements at the westbound 54 exit and entrance ramps.

Construction of the roundabout would close the U.S. 54 and Route OO intersection for about a month, according to the department, and traffic will be detoured to other state routes. Work on the westbound 54 ramp intersection will be done under traffic controls.

MoDOT is expecting to award a contract for the work in April 2023.

The department's public meeting to discuss the project is scheduled for 4-6 p.m. Thursday, Dec. 1 at the Holts Summit Municipal Building, 213 South Summit Drive.