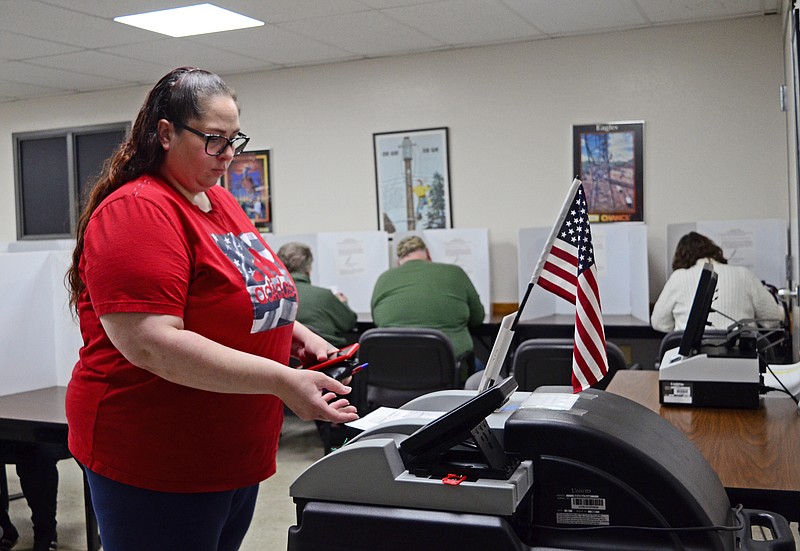 The most important thing on voters' minds as they went to the polls Tuesday appeared to be the economy.

Inflation and high gas prices were often the first things voters wanted to discuss as they walked out of polling sites.

But they had other issues to attend to, such as deciding whether to approve recreational marijuana, whether the National Guard should have its own state department or whether the state should hold a constitutional convention.

Amendment 3 would make recreational use of marijuana legal -- allowing consumers ages of 21 and older to purchase and use marijuana products. It would also allow businesses to apply for recreational marijuana certification, with existing medical marijuana businesses taking the first spot in line. The measure would also set a 6 percent tax rate for sales, with funds earmarked for veterans programs and addiction treatment efforts.

"I think that will help the state considerably," Bryan said. "We don't pay much in taxes at all. I think that would help pretty well."

While the state has focused on cutting taxes, she said, she realizes there are places where more money is needed.

"You don't get anything you don't pay for," she added.

Mallory Smith, a lifetime Jefferson City native, said she voted all Republican on her ballot. But Smith said something major brought her to the polls Tuesday.

"I want them to legalize marijuana," she said. Making it legal allows others to use it more easily for medicinal purposes, she said. She holds a medical marijuana card herself, but knows of other people troubled by the process of acquiring one.

"(Recreational marijuana?) -- that's a no before you even finish it," Gary Phillips said. "I just think that's a slippery slope to go down when you utilize that. I know polls are in favor of that, but I am not."

"Amendment 3 definitely was the big one that I wanted to make my voice heard on," said Amanda Beaumaster, who voted at Capital City Christian Church, which saw around 260 voters by 1 p.m. "That and Trudy Busch Valentine (Democrat U.S. Senate candidate)."

Tyler Collins, 41, said it was important to him to vote yes on Amendment 3.

"I think it'll bring good revenue and jobs to the state of Missouri," said Collins, who voted at Faith Lutheran Church.

Jim Schlueter, a voter at American Legion Post 5, said he was particularly interested in voting against recreational marijuana legalization.

"That was sort of a no-brainer for me," Schlueter said, adding he voted Republican up and down the ballot.

Henry Waggoner said he was most interested in supporting recreational marijuana legalization.

"I read the ballot, and it's estimated to generate a lot more revenue for the state, and I think that's going to be really helpful," he said.

Waggoner, a 27-year-old student, said he was surprised by the lack of young people voting Tuesday morning. He suggested more might show up in the evening after work.

"I was by far the youngest person in there," he said after voting at American Legion Post 5.

"A lot of people my age don't vote because I think that they kind of feel that society and politics right now is just kind of screwed," he continued. "I wish that would change because the only way we're going to get change is for people to come out and vote."

Gary Sublett said he was at Jefferson City Bible Chapel to vote on "everything." He said he was particularly interested in creating a new state department for the National Guard -- an issue on the ballot.

Amendment 5 would create the Missouri Department of the National Guard, moving the Guard into its own agency instead of keeping it under the Department of Public Safety. The measures placed on the ballot via a resolution passed by the General Assembly this year.

The change, Sublett said, would give more control over the Guard to the people.

He added he's happy with the incumbent judges who are in the Missouri Supreme Court. He'd like to keep them in place.

As he left his polling location, Phillips marveled at the voter turnout.

"I think it's great. I think people are tired of the high gas prices -- high inflation. They want changes," Phillips said. "I think that's what it's going to be -- a change election."

Mark Castrop, who voted at Capital City Christian Church said he was casting a ballot in favor of Amendment 5. He said the move would cut down on red tape.

"They don't need to be falling under more governmental oversight," he said. "I think it's important they handle things themselves."

Amendment 4 would allow the General Assembly to pass a law requiring Kansas City to increase funding for its police force without reimbursement from the state. The amendment came about after the Kansas City Police Department's budget was slashed during the past few years.

"I have kids who live in St. Louis and Kansas City, so I am worried about the crime issue. Again, it's a change election," Phillips said.

Cori Busby is originally from Columbia, but has lived in Jefferson City for seven years. She said Amendment 4 intrigued her.

"I think it is important police have as much money as possible to protect communities," Busby said.

Roger Dydell said he was voting straight Democrat, saying he believed the end of the state's prohibition on marijuana would benefit Missourians while lauding Valentine's bid for Senate.

Castrop said he opposed Attorney General Eric Schmitt's bid for U.S. Senate, pointing to the Republican candidate's lawsuits against school districts and other entities over the past couple of years.

"With all the lawsuits, I don't think he's got the right idea," Castrop said. "I don't have any real complaints about anyone else on here beside Eric Schmitt."

David McAllister, 66, said he votes in every election.

"It's our privilege to vote as American citizens," he said.

In this election, it was particularly important to him to vote for Valentine.

"It just feels like Eric Schmitt spent a lot of time as attorney general filing frivolous lawsuits, and he also seemed to be halfway supportive of the insurrection on Jan. 6," said McAllister, who voted at Faith Lutheran Church, which had 380 voters by 12:35 p.m. -- a better turnout compared to past midterm elections that weren't presidential, according to poll workers.

Kristin Ausley, 35, said she votes in every election because she feels it's important to be heard.

"I wanted to make sure Trudy Busch Valentine got my vote," said Ausley, who also voted at Faith Lutheran Church. "She has reasonable views on abortion instead of the alternative."

By about 11:30 a.m., election judge Ray Klapmeyer said turnout at American Legion Post 5 in Ward 5, Precinct 2, was "steady" and "substantial."

"We've been open for four and a half hours, and we've had upwards of 400 voters," he said.

Klapmeyer said it's hard to say what drove turnout, but general elections and a multitude of ballot measures tend to attract more voters. His precinct hadn't had any issues with voters presenting photo ID, a new requirement in Tuesday's election.

"Other than just a steady flow of people, it's been very routine," he said.

Virginia Brizendine said voting at American Legion Post 5 was easy and fast. She wasn't interested in any particular race or ballot measure, but said she's a consistent voter.

"I've always believed it's important to exercise your vote," she said. "If you don't, you don't have a right to complain."

Evelyn Hawley said her experience at American Legion Post 5 went "very smooth" because she was prepared. She votes routinely and said she was interested in every question on the ballot.

"It's very important to have your voice be heard, even though sometimes it doesn't seem like it's being heard," Hawley said. "You do what you can do. Just vote."

Said Jim Rathert: "It's important for me to vote because that's what I have always done, so it's maintaining my personal tradition of voting, and that of course expresses my belief that it's an important civic duty." He added he is thankful to be able to vote and know that it counts, because many people in other countries don't have that opportunity.

"I think (voting is) the way you make life better for people and cultures," Rathert said.

"It's what you need to do," said Bill Gamble about the importance of voting. Gamble said he makes a habit of trying to vote whenever he can.

More than 950 people had voted at Capital West Christian Church's Event Center around lunchtime, and a steady line of voters walked through the doors.

By about 5 p.m., election officials at Missouri Electric Co-Op said the location had a nearly 50 percent voter turnout.

Deborah Hill-Akinola said she was very excited to vote.

"I hope everybody came out to vote because we need it," Hill-Akinola said.

Brett Kolb, a student, drove from the Missouri University of Science & Technology to vote at Missouri Electric Co-Op.

"Voting is really important. It's one of our great freedoms," Kolb said.

Adam Stroup shared a similar sentiment about the importance of voting.

"I feel pretty good about voting today," Stroup said, "I think voting is one of the last few rights we have."

Not all voters at the polls were optimistic. Mel Kallal said he wasn't really excited to vote. 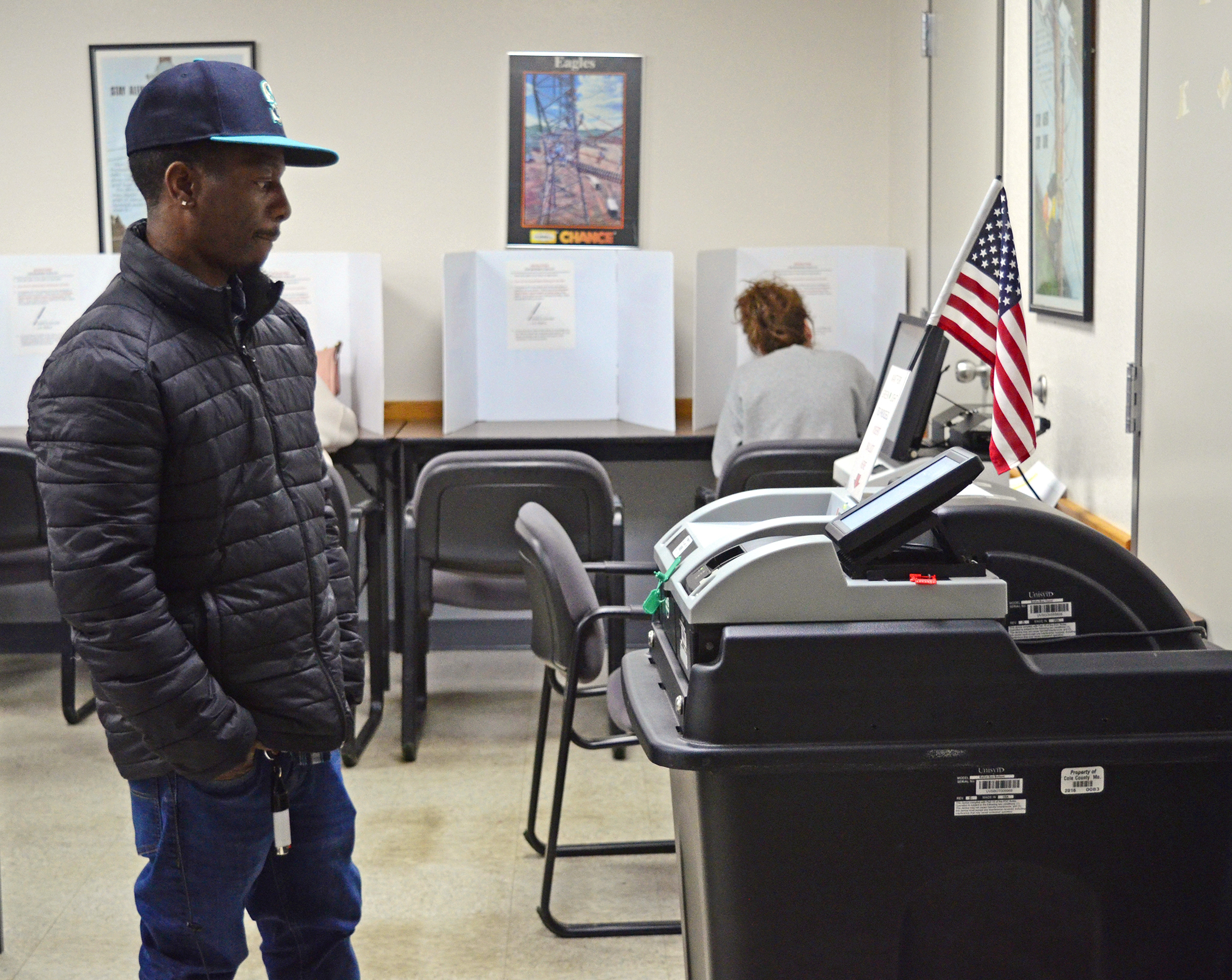 Eileen Wisniowicz/News Tribune Demetrius Hill waits for his ballot to be approved on Tuesday, Nov. 8, 2022 at Missouri Electric Co-Op Employee's Credit Union in Jefferson City. Hill voted in precinct 13 which has 1,683 eligible voters. 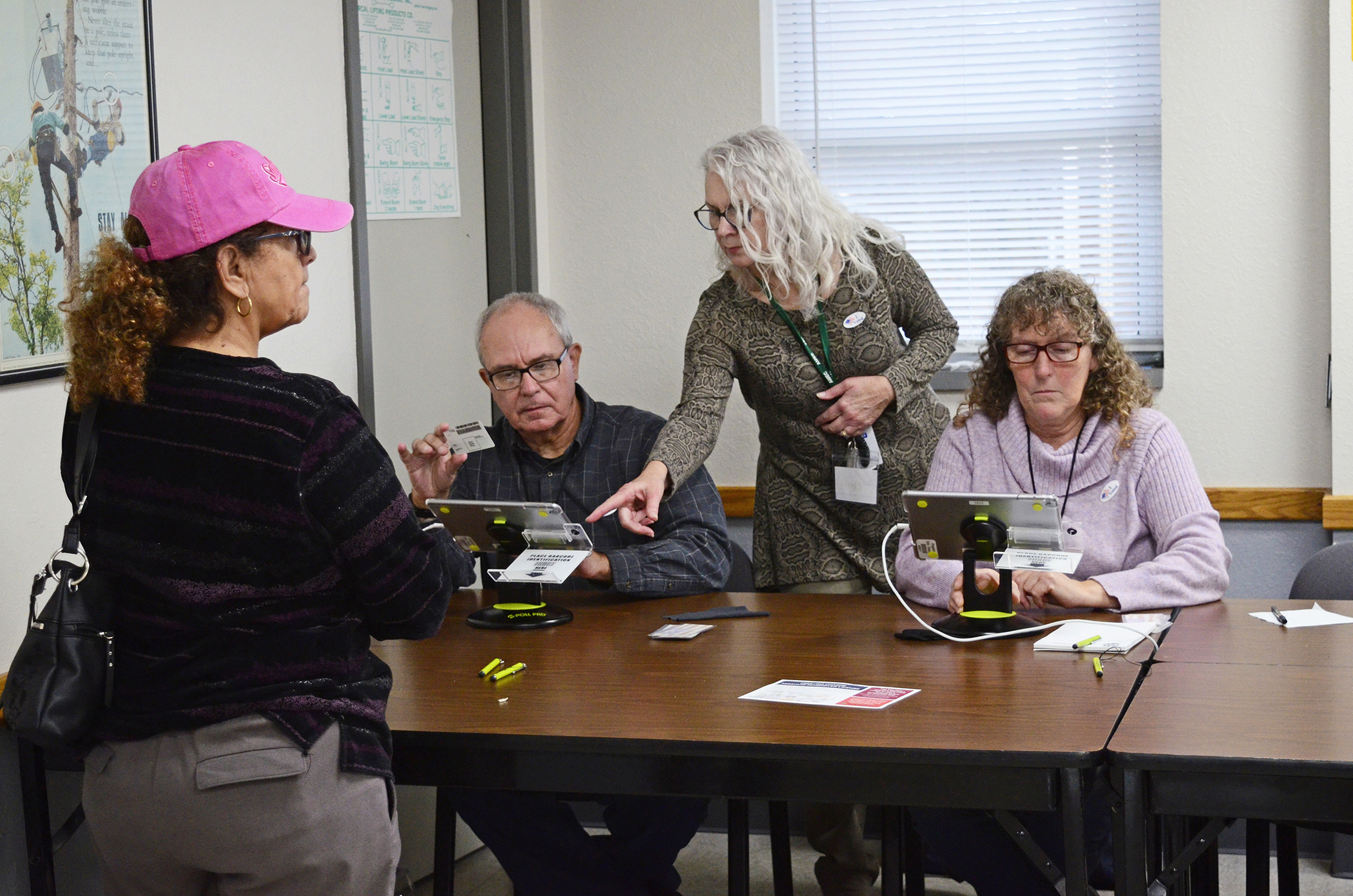 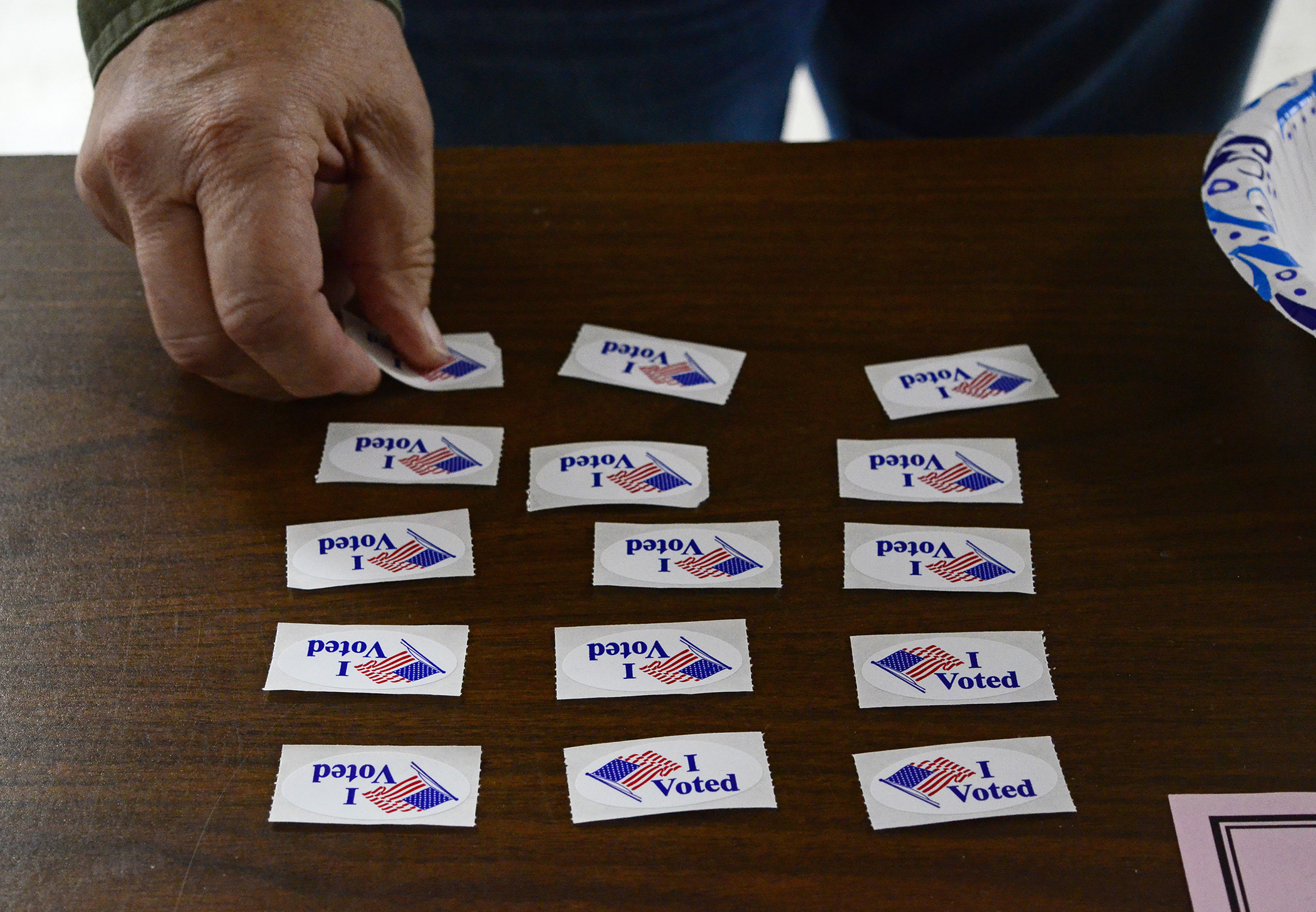 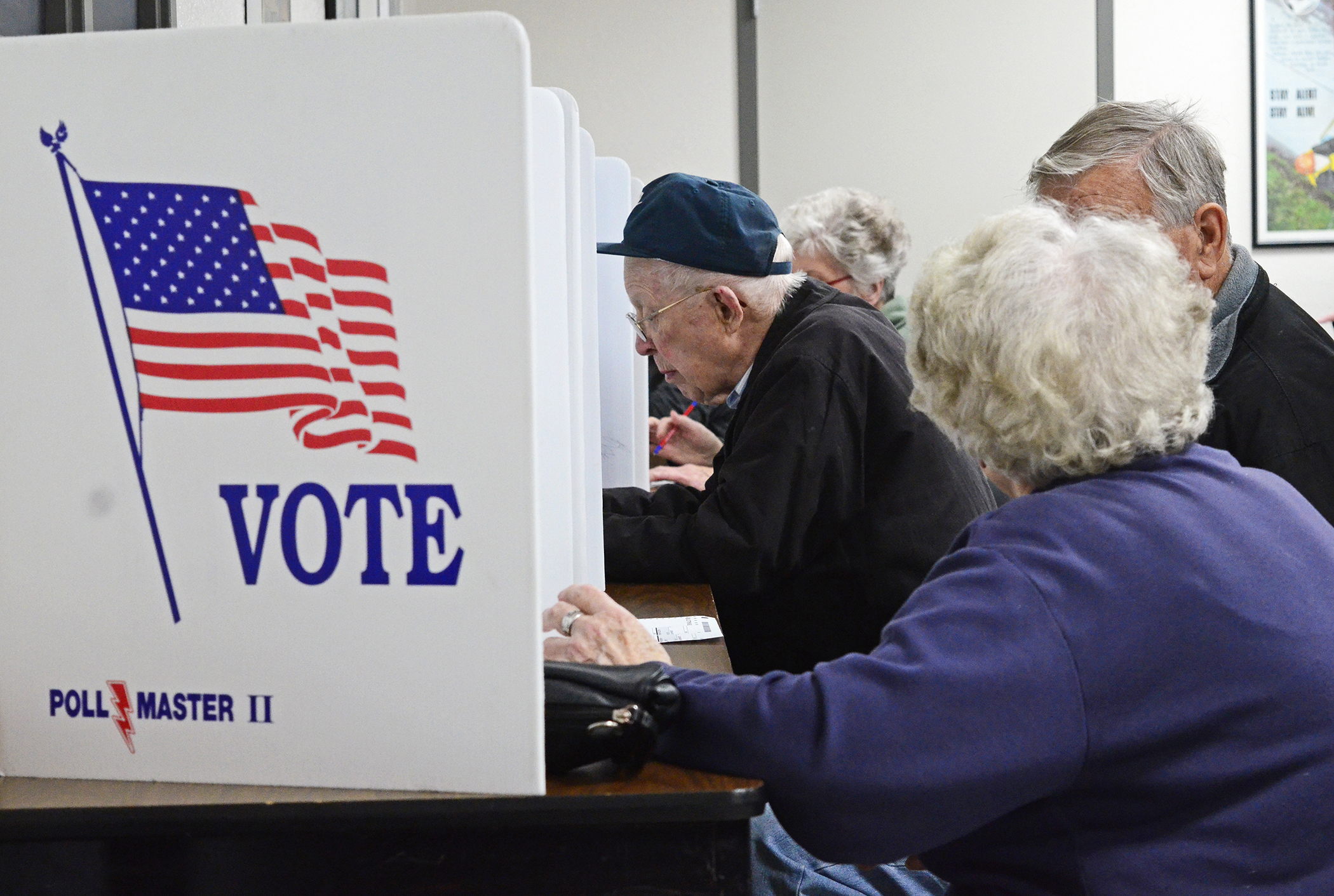 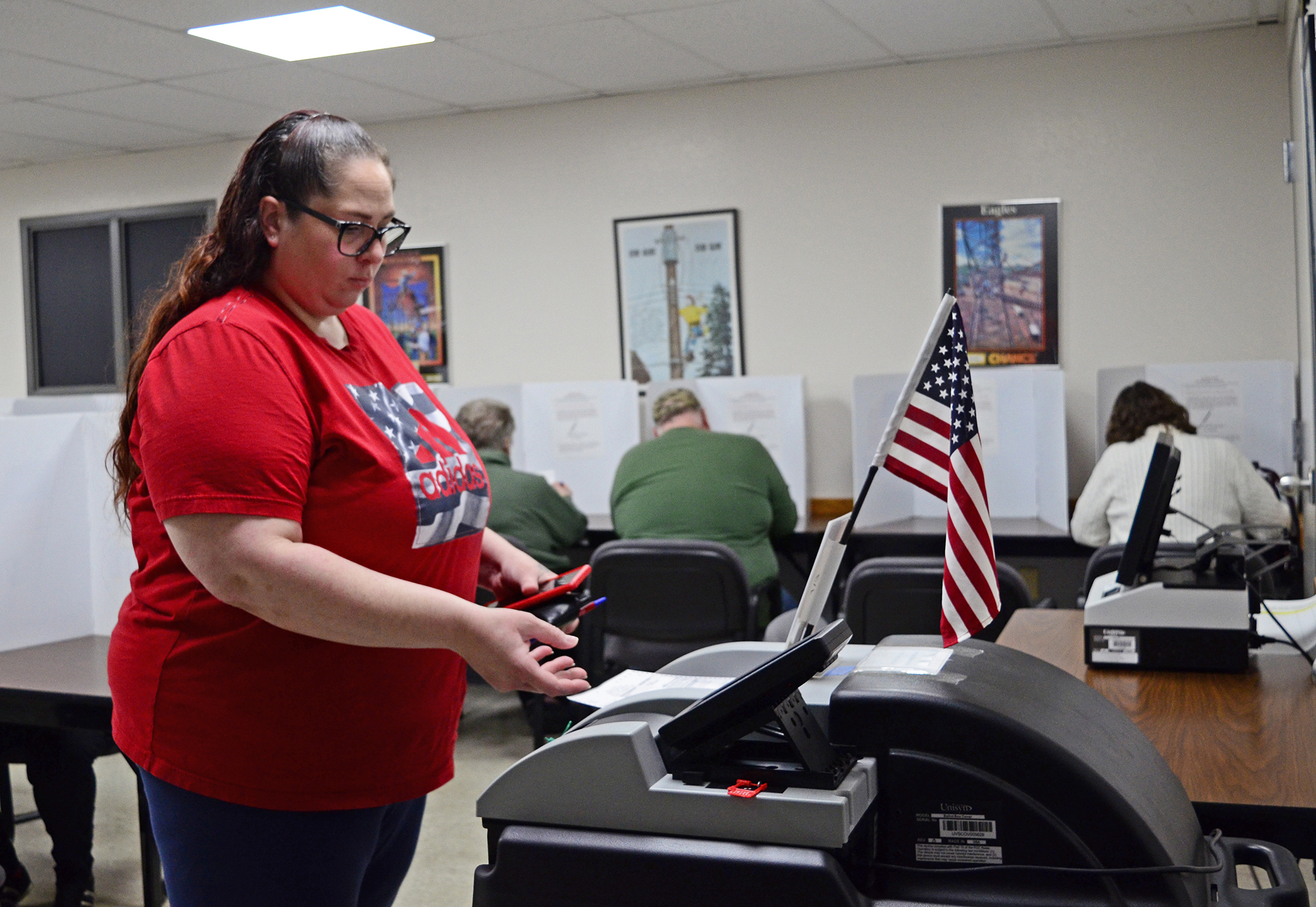