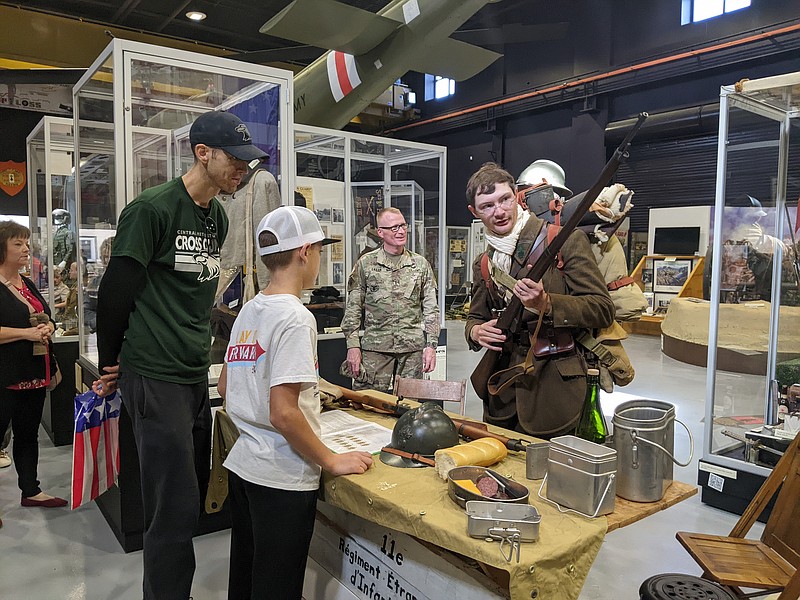 Ryan Pivoney/News Tribune photo: Military reenactor Duncan Noack demonstrates to Scott and Charlie Skinner on Sunday, Nov. 6, 2022, how the French military would carry and equip bayonets to their rifles in World War I. Noack was dressed in typical French WWI military garb and explained how different soldiers carried various supplies and equipment.

Military history came alive over the weekend at the Missouri Military History Museum in Jefferson City.

More than 50 reenactors showcased period weapons, uniforms, vehicles and military gear from the Revolutionary War through the Vietnam War as the museum celebrated its annual Military History Appreciation Weekend. Outside the museum, more than a dozen military vehicles and aircraft were on display.

Jack Percival, a 10-year-old who visited the museum with his family Sunday, was beaming over the military vehicles.

"These things are really cool and I've never really seen these things really up close," he said. "I've only really seen them in movies and in pictures, so I just wanted to get an actual front, good-view, look at them."

History is Jack's favorite subject as a fourth grader at West Elementary School, he said. His class is learning about Native American cultures and European explorers, he added. They haven't reached historical periods with American conflicts yet, but when they do, he may have a head start.

Jack has always had a fascination with military vehicles, his mother said. Jack said his favorite vehicles on display Sunday were a Lockheed C-130 Hercules transport aircraft and a Bell AH-1 Cobra attack helicopter.

"This thing's giant," he said, pointing to a C-130 Hercules that spent its first 12 years servicing bases in Japan and Okinawa. "About 97 feet long and the wingspan 132 (feet)."

The museum hosts the appreciation weekend twice a year: once in November to celebrate Veterans Day and once in May to celebrate Memorial Day.

Rain put a damper on attendance Saturday, Museum Director Charles Machon said, but more than 500 people still showed up. Last spring, more than 1,000 showed up for the opening day.

Machon said the event is a good way to delve into in-depth history with experts, something many schools simply don't have time to do.

Using historically accurate equipment and supplies, reenactors demonstrated what military life and culture was like throughout the ages of American history.

Duncan Noack was among a few French World War I reenactors. He displayed how to carry and equip a bayonet to a rifle as other reenactors drank from a historic water canteen and ate French bread and sausage.

"Yesterday they were even playing French music from World War I," Machon said. "They really immerse themselves into that."

Machon said he hopes visitors walked away with a greater appreciation for what Americans, their allies and opponents endured during past conflicts.

"We have an interest in history," Skinner said. "Charlie would maybe one day like to be in the military, so we always like to check out things like this when we see them."

Skinner said he's particularly interested in World War I era history while his son tends to be more engrossed with the World War II era.

"We come out here two or three times a year just to see what the museum has," Skinner said, adding he heard about the appreciation weekend through his son's Cub Scouts group.

Charlie liked seeing the aircraft outside the museum, particularly the C-130 Hercules, he said.

Richard Rehklau traveled in from Fulton to visit the museum, which he said brought back memories from his time attending Kemper Military School in Boonville.

"I was here last year and enjoyed it," he said. "I just wanted to bring back some old memories, I guess."

Rehklau recalled working in the military school's armory one year and running out of pistols and rifles to issue out. So he issued himself a howitzer, a long-ranged weapon falling between a cannon and a mortar. He manned it for ceremonies after getting a crew to help him clean it up.

"I just thought it was interesting to have a hold of this thing," he said looking at a howitzer on display outside the museum. "And I got other people to help me clean it."

Rehklau also said he spent a couple nights sleeping on top of a M113 armored personnel carrier. It was warm above the exhaust, he said with a laugh.

He said the collection of military vehicles and memorabilia are a good reminder of where the country has been throughout history, and a caution against repeating it.

"History keeps repeating itself and we have to pay attention to it," he said. "And lots of times we don't listen."

The Missouri Military History Museum, located at 2405 Logistics Road, is free and open to the public from 8 a.m.-4 p.m. Monday-Friday, and Saturdays from 10 a.m.-4 p.m. The museum is also open for tours and large groups with a reservation. On Facebook, visit https://www.facebook.com/MOMilitaryHistory/. 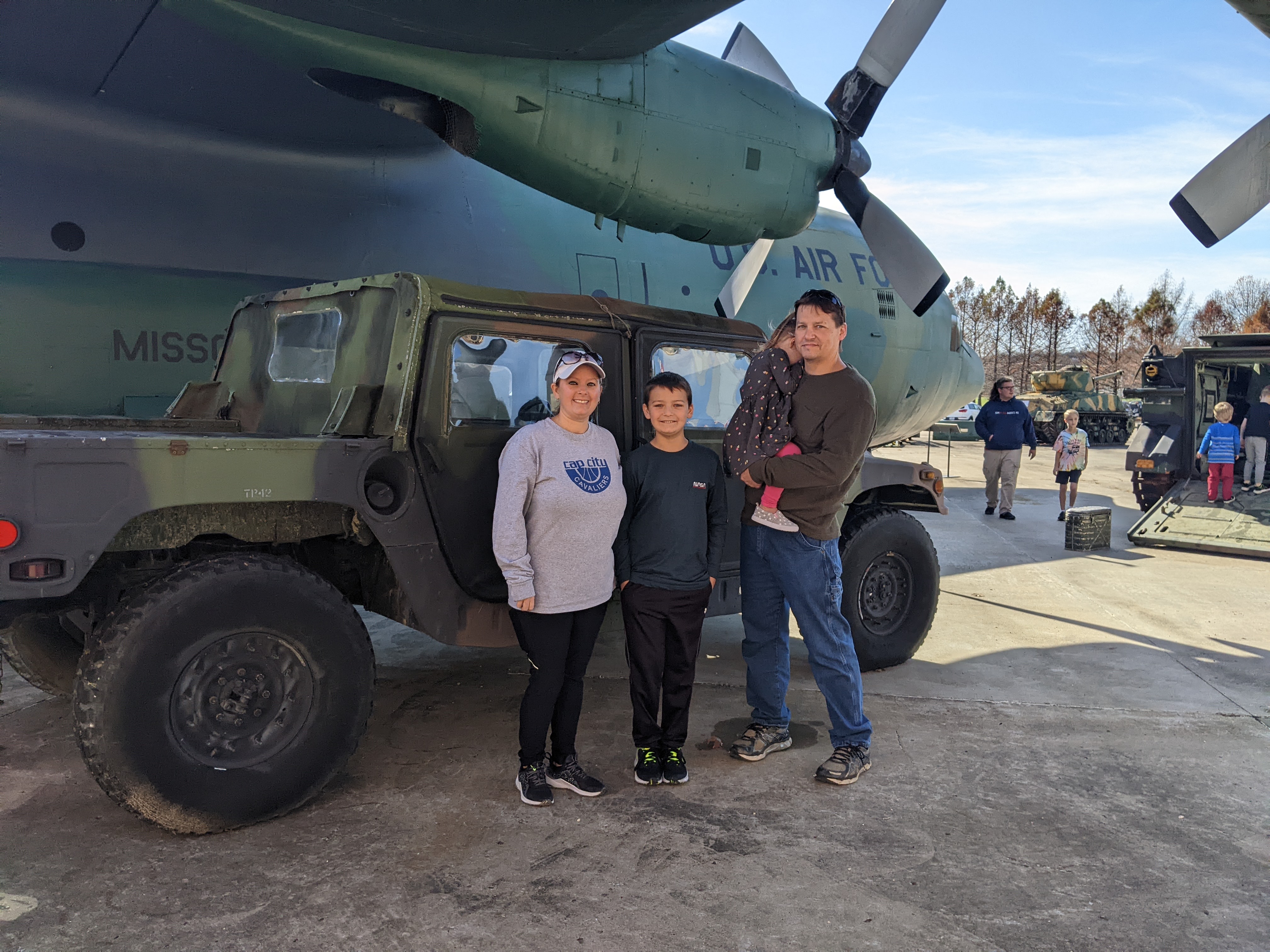 Ryan Pivoney/News Tribune photo: The Percival family posed for a photo with a military Jeep under a Lockheed C-130 Hercules transport aircraft Sunday, Nov. 6, 2022, at the Missouri Military History Museum. 10-year-old Jack (center) has long been fascinated with military vehicles, his mother said. 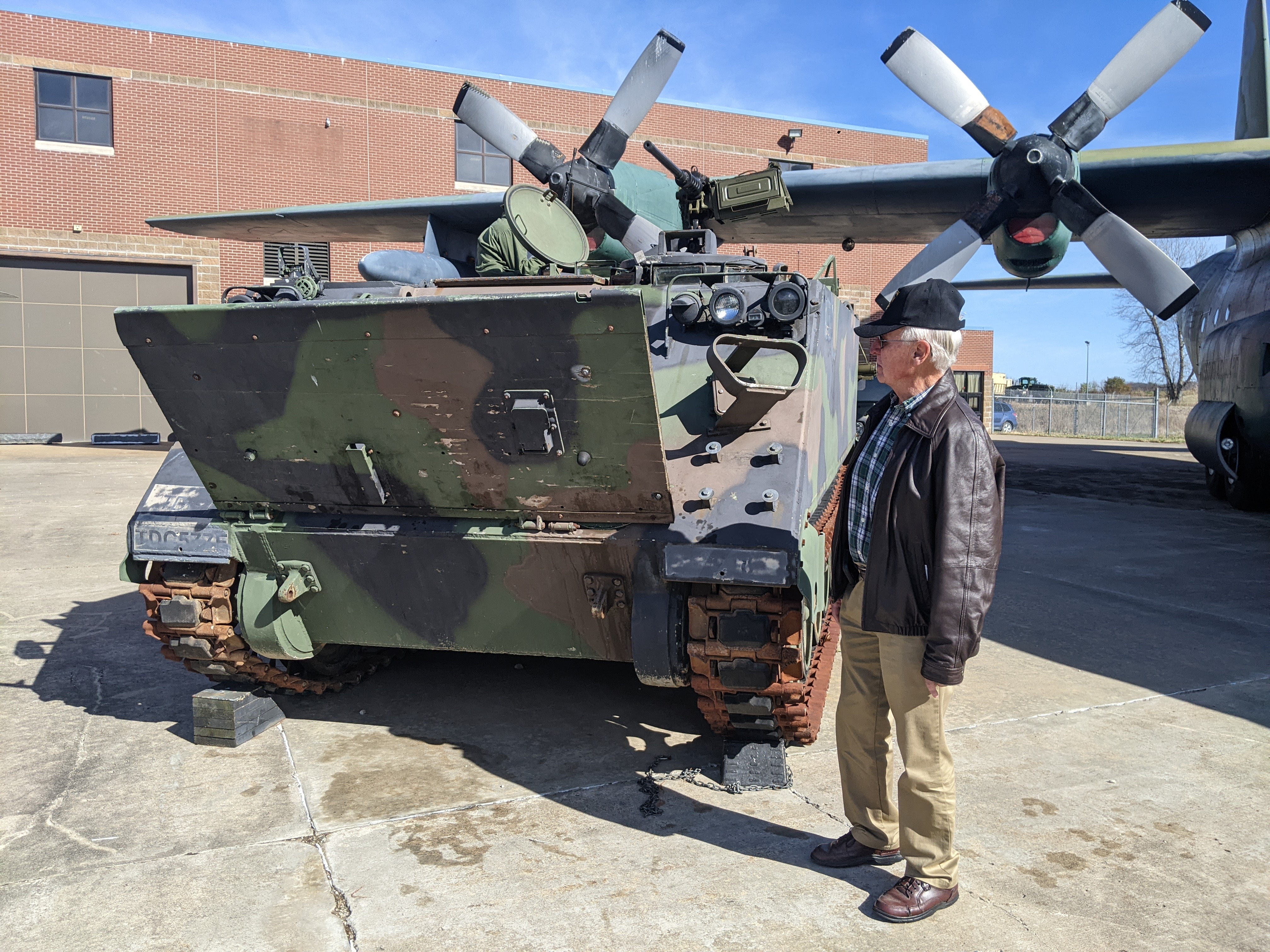 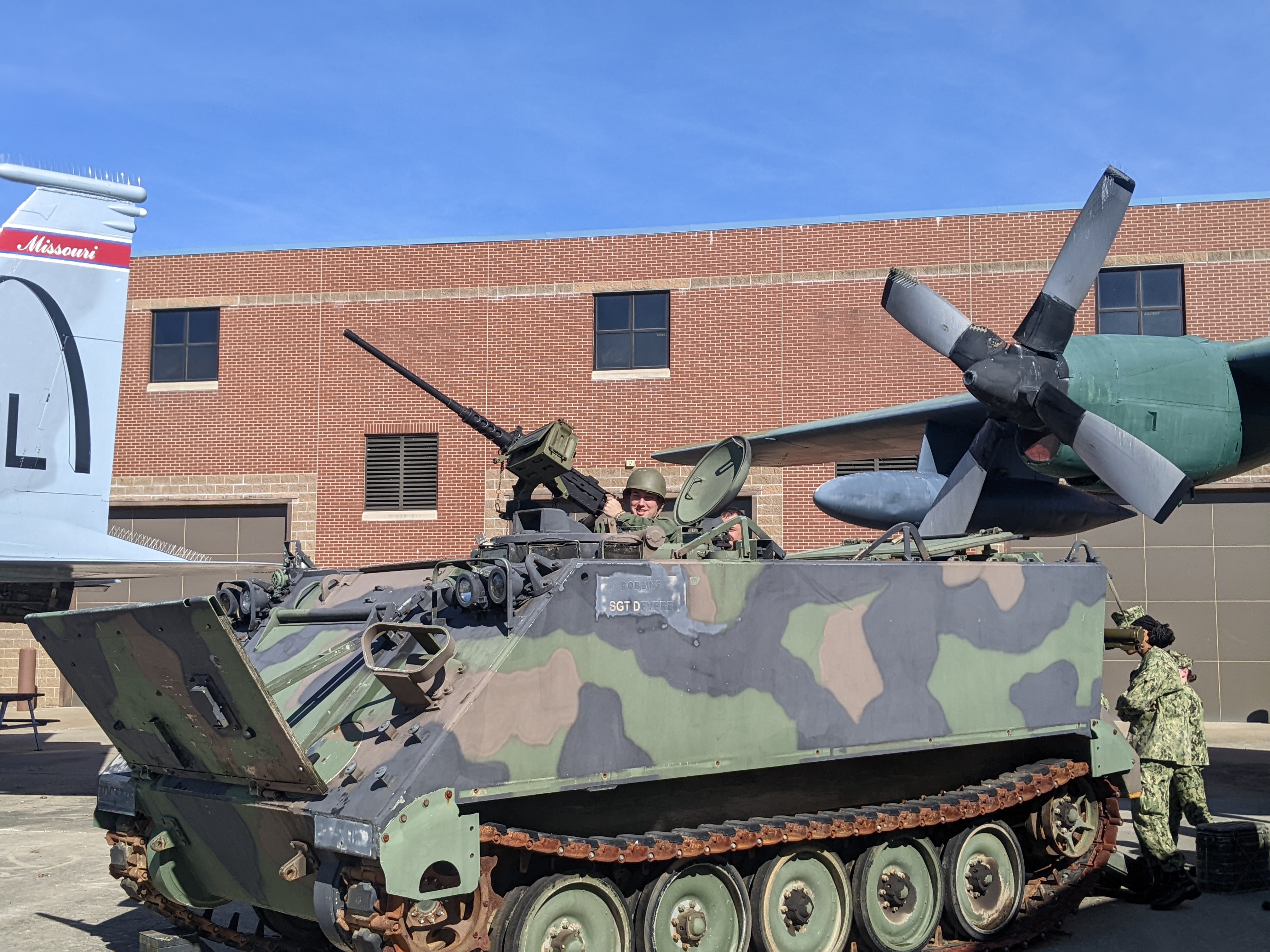 Ryan Pivoney/News Tribune photo: Naval Sea Cadets took turns steering the guns on top of an M113 armored personnel carrier Sunday, Nov. 6, 2022, at the Missouri Military History Museum. In addition to reenactors on hand, the museum's Military History Appreciation Weekend featured historical and military-oriented groups such as the Sea Cadets and the Daughters of the American Revolution.