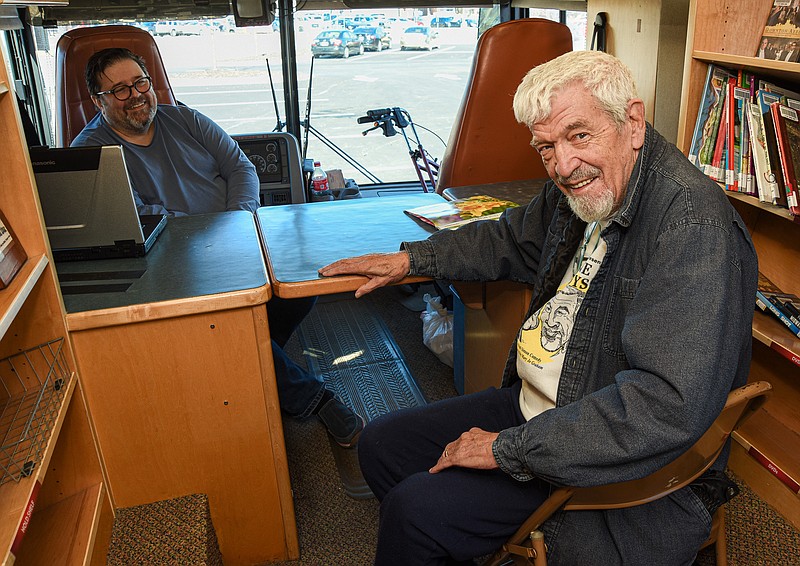 Julie Smith/News Tribune file photo: Jack Renner, at right, is shown Jan. 26, 2022, with Mark Wegman, as the two discussed Renner's production of Neil Simon's "Last of the Red Hot Lovers", which was performed at Scene One Theater in May. Renner was a regular visitor to the Missouri River Regional Library Bookmobile which Wegman drives and where the two thespians discussed all things theater. Wegman, founder of Scene One Theater, worked closely with Renner.

The curtains closed on a guiding fixture of the Jefferson City theater community over the weekend.

Jack Renner had been acting, directing and mentoring local community theater groups for decades, most recently co-directing Scene One Theatre's "Last of the Red Hot Lovers" with his son in May. Renner died Saturday at the age of 84 after struggling with dementia, his son, Tom Renner, said.

Local actors and theater groups were quick to show an outpouring of love on social media. Tom said the amount of people who have offered their condolences is "outstanding."

"His legacy, for lack of a better term, speaks for itself," Tom said. "He touched the lives of hundreds if not thousands of people over the years in one way or another. I can only do my best to preserve that in memory and in action."

Jack Renner was known for talking about theater for hours, being an encouraging voice to young actors and putting pacing at the forefront of his direction.

He was everywhere in the community theater scene. He starred and directed shows at the Little Theatre, Capital City Productions and Scene One Theatre.

"This is just a monumental loss for the Jefferson City theaters," said Rob Crouse, founder of Capital City Productions. "All of us."

Added Scene One founder Mark Wegman: "He was a veteran and a theater father to all of us."

Crouse also credits Jack for helping him get Capital City Productions started. He met Jack through weekly work at a radio studio and they bonded over theater and the arts.

Jack suggested Crouse direct a play for the Little Theatre, which he did. Many shows later, Crouse decided to venture into dinner theater with Jack's encouragement. That evolved into Capital City Productions.

"There probably would be no Capital City Productions today without Jack Renner because he got me involved in theater again and encouraged me to check out this dinner theater idea," Crouse said. "He actually starred in the very first dinner theater production that we did at the Ramada Inn."

The show was controversial at the time, which Crouse said made it sell out a dozen shows. In another dinner theater show, Jack gave Crouse the shirt off his back to not spoil the plot's mystery.

"Greater love hath no friend than he who would put on his friend's clammy, wet, sweaty shirt to wear on stage," Crouse said. "I will never forget that act from Jack of giving me his dry shirt to wear during that."

Nobody could swear on stage like Jack, Crouse said. But he was also an affectionate person, Crouse said, never coming or leaving without a hug.

Jack's patience made him a perfect director, Crouse said. He gave productions a "steady hand" and encouraged new actors to find comfort in their roles. Direction was always delivered with a positive attitude, he added.

"I loved him very much," Crouse said. "He was just such an integral part of my life and my growth in Jefferson City theater."

Wegman, who founded Scene One Theater in 2005, was another close friend of Jack's. Even before founding Scene One, Wegman said Jack was a mentor.

Wegman recalled some direction Jack gave him for a character performance once in 1992, which was to tell him the police sergeant he was playing would smoke a cigar. It stuck and shaped Wegman's ability to find the character, he said.

Wegman said he also had a blast performing Abbott and Costello's "Who's on First?" with Jack around town.

"Many of us in town, he directed at one time or another," Wegman said. "We were very close. The best of friends."

Wegman said Jack directed at least 15 shows for Scene One and helped select the lineup of shows to be performed.

Even if he wasn't performing in or directing a show, Wegman said he was always around to watch rehearsals and catch up with actors. And Jack's stamp of approval "meant the world," Wegman said.

Tom described his father as a friend, one that he grew closer to as he got older. A shared passion for theater deepened their connection.

Wegman directed Jack and Tom in "Tuesdays with Morrie" three times at Scene One.

Tom said the performances prepared him for his father's passing in some ways, but he didn't realize it until his father was gone.

"There are still lessons that I'm getting from him and from that experience as a whole because there was this raw energy that had to be put out there to be believable for an audience as performers," he said. "There were places that I went there that struck me at the time, but really strike me even more so now."