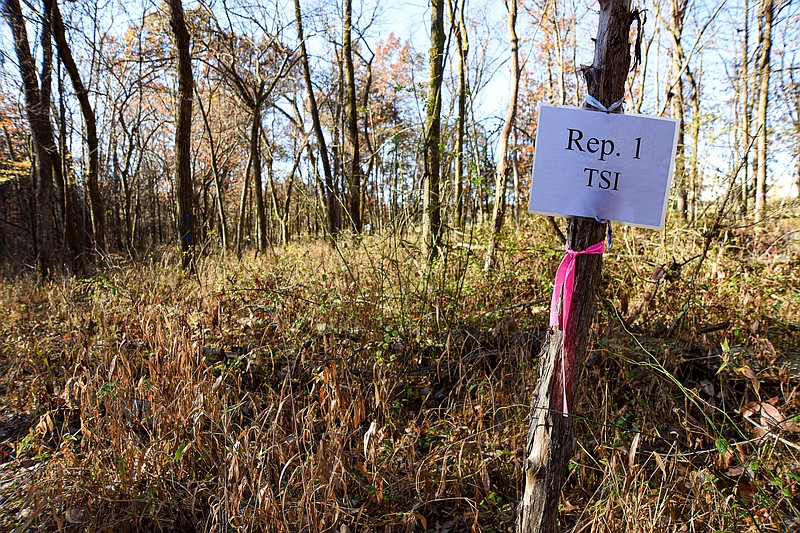 Julie Smith/News Tribune photo: Specific sections of the woods are noted as areas of study by researchers from Lincoln University in Jefferson City.

Closed canopy woodlands make up about a third of the state, according to the Missouri Department of Conservation, and private landowners control 85 percent of the total 15 million acres.

Lincoln University researchers are working to turn those unmanaged areas into landowner profit.

"These sorts of properties are everywhere -- in every farmer's property you will find areas like this," said Sougata Bardhan, an assistant professor of natural resource management leading the efforts. "So there's a tremendous opportunity for us to make a huge impact, which will not only make income generation for farmers but also protect the environment and create ecosystem services."

Bardhan is studying a 14-acre plot of forest on Lincoln's Alan T. Busby Farm with a research assistant and graduate student. Still in the preliminary stages of the study, the forest is divided into sections to test management practices that will eventually be shared with landowners and agricultural support agencies to promote forest farming.

The primary goal of forest farming is to grow something in the forest understory.

An abundance of trees in a forest isn't healthy because each plant has competing spacial and nutrient needs, Bardhan explained. They also form a canopy that blocks sunlight from reaching plants on the forest floor.

As sunlight is the best determinant of what grows in the forest understory, Bardhan said the goal of forest farming and management is to have 50 percent of light reaching below the canopy.

That starts with removing low-value trees first. Hardwood trees -- like oak, ash and hickory -- tend to be high in value, Bardhan said, while conifers and cedar are lower in value. Forest management may require landowners to take down high-value trees for the health of other high-value trees.

It's all about staying rational and balanced in the approach, he said.

"A forest which is not healthy is not the best environment you can have, even for tree-huggers," Bardhan said. "I am one myself, but I am still cutting down trees because I know if I do this, the rest of the trees will be healthier."

The removal of less desirable trees from a woodlot is known as Timber Stand Improvement, or TSI. The practice helps free, high-value trees from competition for natural resources, such as sunlight and soil nutrients, concentrating growth on high value trees and improving the overall condition and appearance of the woodlands.

It's one of the treatments Bardhan said is studying at Busby Farm. He said the contractor hired to cut down trees should finish on the farm in the next month or so.

Bardhan is also using prescribed burns, which involves intentionally setting portions of the forest on fire to stimulate growth in some areas and suppress it in others. Burns won't begin until late December, he said.

The 14-acre forest at Busby is divided into three areas, each of which has plots for TSI, prescribed burn, and simultaneous TSI and prescribed burn. The results of those treatments will be compared to a control plot also on the farm.

"We are not taking out trees and creating a system which is environmentally destructive," he said. "What we want to do is manage the forest so that the timber quality is good and at the same time we can generate some income."

More sunlight hitting the forest floor stimulates botanical growth, some of which Bardhan said can be of high value for their medicinal properties. TSI is beneficial for wildlife as well because the remaining trees produce more acorns, he said.

Landowners can also use fallen logs to grow expensive mushrooms. Hardwood is particularly good for it after inoculation, Bardhan said.

"Forested mushroom production is a wonderful opportunity for high value cash return," he said. "So this is like a win-win situation. When you do the forest Timber Stand Improvement, if you are taking down the logs that are suitable for mushroom production you can use those same logs ... let them be there and in one year you'll have this high value crop."

"These are income generating options along with the benefit we get from making the forest better," he added.

North Central Sustainable Agriculture Research and Education gave Bardhan a $56,248 grant for the research, titled "More than a Woodlot -- Developing Natural Resource Professionals' Capacity to Support Forest Farming in Missouri," near the end of October.

Bardhan said he wants those agencies to bolster support for forest farming so when they visit a woodland area they can help a farmer generate income from it while benefiting the environment.

"The farmers I visit, they get visited by DNR and NRCS, still for 12 years there has been nothing that has been done," he said. "One reason is, probably, they don't do it actively so they're not thinking about it. And that's what we want to change."

The third year of the project is dedicated to evaluating how agricultural agencies incorporate the forest farming knowledge into practice and how many landowners are adopting it.

Forest farming isn't as widespread of a practice in Missouri as it is elsewhere in the country, Bardhan said, but interest seems to be on the rise.

There are some groups around the Ozarks using forest management practices, he said, and some farmers have expressed interest.

Bardhan said he's been talking to some Missouri farmers whose land is 40-50 percent unmanaged forest they don't use, but could.

"This farmer I work with a lot, he has about 80 acres," he said. "So think about the potential there." 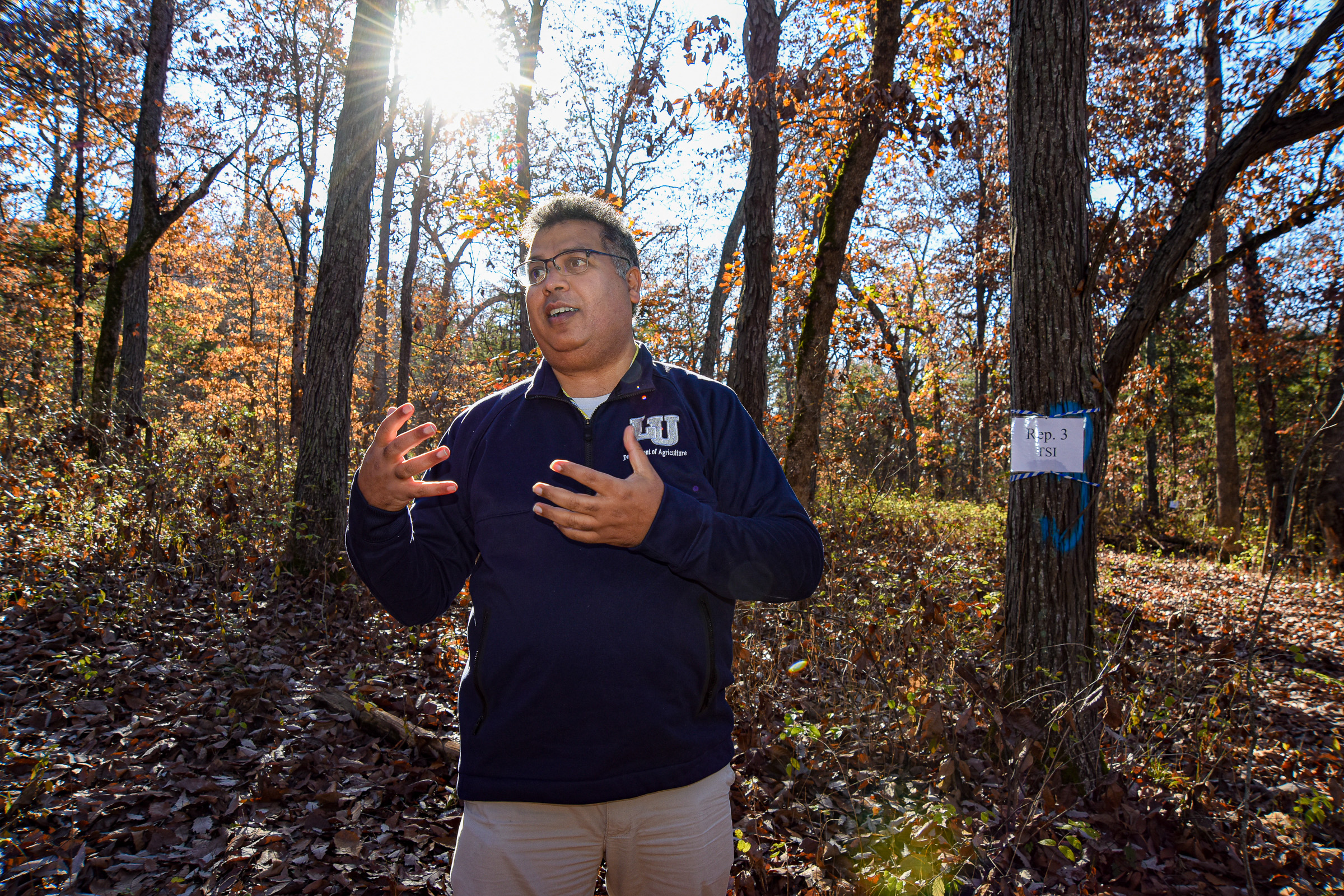