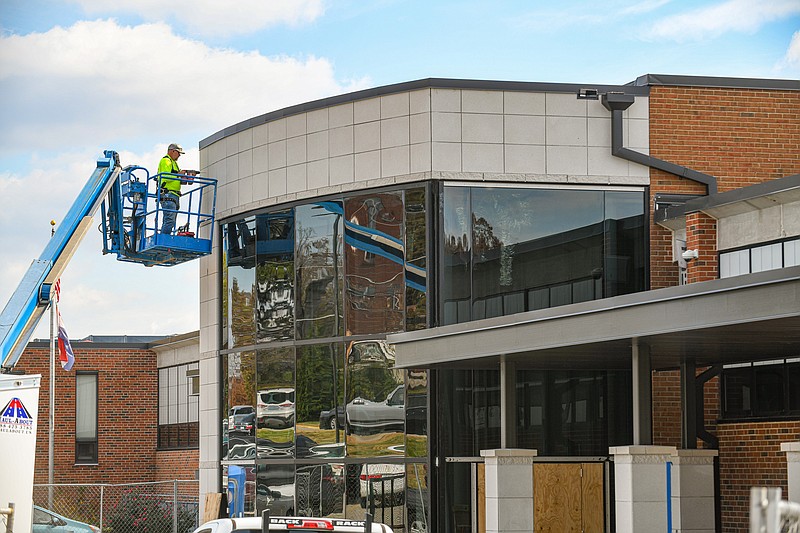 Julie Smith/News Tribune photo: Adam Moats of Sircal Contracting prepares to attach bronze letters on on the fascia of the newly constructed entrance on the north side of Helias Catholic High School. Work on this project and renovation of the lobby, restrooms and locker rooms in Rackers Fieldhouse have been underway since the end of the 2021-2022 school year and are nearing completion.

Helias Catholic High School is still on schedule to complete updates to one of its entrances and the fieldhouse in late fall, according to information provided by the school.

The Crucifix Entrance, so known because of the statue of Jesus on the cross inside the windows facing Swifts Highway, was part of the original 1956 building. Prior to the 2017 expansion that added the main office, it was the primary entrance, and it is still the main entrance for students. The entryway is being extended outward, and crews are adding an atrium area, as well as a roof on both sets of doors.

As of the News Tribune's last update in early September, crews had finished stonework at the entrance and had begun putting in drywall and preparing for windows.

Now, roofing and gutters are complete, and windows are installed. Interior framing and drywall is also complete. The construction curtainwall and doors have been removed, which has opened up the space for the expanded atrium and entrance.

Rackers Fieldhouse, a 1992 addition, has also been under construction. Crews have been updating restrooms and locker rooms and making cosmetic changes to the lobby.

Electrical and HVAC work is complete, and crews are now painting and preparing to install terrazzo flooring in the lobby. A few items such as wooden doors and door hardware may not be finished with the rest of the project because of potential supply chain issues.

The school plans to resume full use of the building and the newly renovated spaces within the coming month.