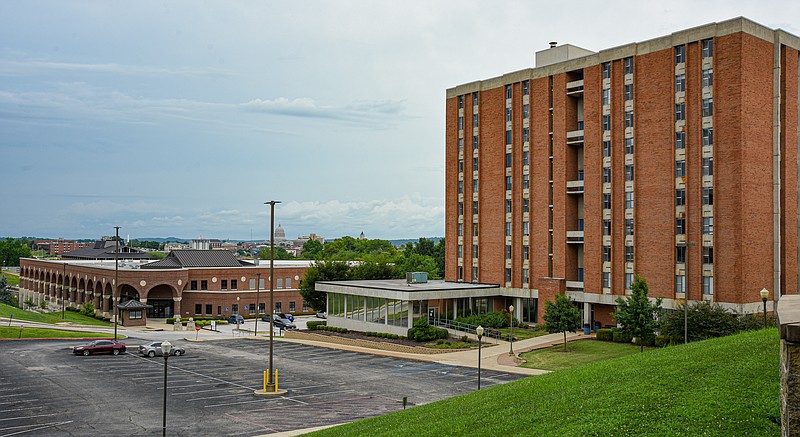 Julie Smith/News Tribune photo: Dawson Hall, at right, on the Jefferson City campus of Lincoln University is scheduled to undergo major renovation as detailed by the Lincoln University Board of Curators. The dorm, which is the tallest building on campus, stands near Page Library, at left, and houses 324 residents. The hall originally served as housing for female students but became a coed dorm in May 2009.

Lincoln University is delaying the renovation of Dawson Hall a few weeks to hire a construction manager to oversee the project.

University administrators plan to bid the position out with a request for qualifications (RFQ) that will be published later this week. Lincoln typically keeps RFQs open for two weeks.

"It slows down maybe just a little bit, but the reality is whether the building's done in February of '24 or August of '24, it does no difference for us," University President John Moseley said, adding that the renovation needs to be complete by fall 2024 to meet student housing needs.

Jeff Barlow, vice president of administration and finance, and Jeff Turner, director of facilities, presented the idea to the building and grounds committee of Lincoln's Board of Curators on Monday afternoon. Barlow said work on the renovation will proceed once the construction manager is hired.

The construction manager will represent Lincoln and work with the project architect and general contractor throughout the renovation, Barlow said. How much the university will pay to hire someone to the position will be determined "in the near future" with board approval, he said.

Barlow said the university will be asking construction managers to propose the approach they would take to the project in the RFQ because that's how other institutions of higher education in the state have done it.

Lincoln got the ball rolling on renovation plans in February by appropriating $10 million for the project and hiring an architect shortly after. At the board's September meeting, contracted architectural firm Hastings & Chivetta presented design renderings and informed the university the renovation would cost nearly $17 million.

Lincoln has $12 million to spend on campus renovations and submitted a waiver requesting the federal government allow it to use $5 million in COVID-19 relief funds on the project. Barlow said the federal government responded to the waiver with questions but the university has not received a final answer as to whether or not it can use the funds on Dawson's renovation.

Given staffing shortages in the facilities and maintenance department, curators on the building and grounds committee were seemingly receptive to hiring a construction manager.

"I just see that, in a very simple way, that this construction manager is going to make sure Lincoln doesn't get screwed in this process, and that we get what we're looking for in terms of a finished project," Board President Victor Pasley said.

"That is the plan," Barlow responded.

The preliminary renovation plans Hastings & Chivetta presented for Dawson Hall include adding an exterior elevator tower to the 10-story building, replacing all windows and preserving the layout of student rooms.

Administration's hopes for more single rooms were dashed during the board's September meeting when the firm said it was cost-prohibitive given the building's existing structural layout.

In other action items Monday, the building and grounds committee gave initial approval to spend $155,677 on structural repairs at Reed Stadium. The committee also discussed several other ongoing improvement projects in the works around campus.