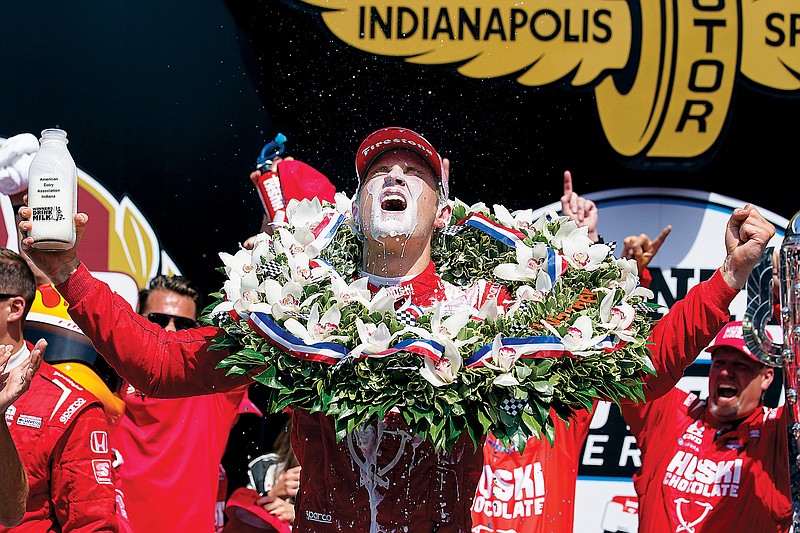 That was the message from Marcus Ericsson after the biggest victory of his life, an Indianapolis 500 win that just maybe would earn him some respect as a race car driver.

It’s not Ericsson was some rich kid who bought his way into Formula One without the talent to warrant a seat. In fact, Swedish investors hoping to develop the nation’s next racing superstar found Ericsson when he was 15 and provided the financial backing he needed to rise through the European ranks and make it to F1.

His backers never stopped believing in him and stayed with him through 97 winless F1 races. They supported Ericsson when he decided to pack up and move to the United States for a fresh start, and stuck with him after his first uninspiring IndyCar season.

Ericsson drove for Sam Schmidt in his rookie IndyCar season, but he was let go when McLaren bought into the team ahead of the 2020 season and changed the entire lineup.

Ericsson needed a new job and Chip Ganassi Racing was interested -- so long as Ericsson found the money to field the car. He partnered with Swedish company Huski Chocolate, which sponsors the No. 8 car Ericsson drove to the win Sunday at Indianapolis Motor Speedway.

The victory put Ericsson alongside Kenny Brack as the only Swedes to win in 106 runnings of the Indy 500, and to Ericsson, legitimized his career as so much more than “a pay driver.”

“You know, that’s what people call you if you come in and have strong backing,” Ericsson said Monday. “I don’t come from a rich background, I come from a normal family in Sweden, and I’ve worked very hard in my career to get opportunities and get people to believe in me.

“And then they put a label on you as a pay driver, and I had that label all my F1 years and even here in America. Coming here, I don’t think there were too many people super excited to see me here in IndyCar, and it’s just something that has been sticking with me.”

But the Ganassi organization isn’t a backmarker team and Ericsson was now driving cars capable of winning races. He had an adjustment period in 2020 adapting to a new culture of sharing information with teammates who cheer for one another rather than try to defeat them, and Ericsson was admittedly still rebuilding the confidence that had been shattered during five F1 seasons.

He didn’t score his first IndyCar victory until Detroit last June in his second season with the team -- it was Ericsson’s first win in eight years -- and an August win in Nashville earned him a contract extension Ericsson said “is multiple years.”

The so-called pay driver is now a Swedish hero. Finn Rausing, one of Ericsson’s longtime backers, attended his first Indy 500 on Sunday and then kissed the bricks in celebration of his investment’s victory. Rausing also passed on to Ericsson a congratulatory message sent from King Carl XVI Gustaf, the monarch of Sweden.

Ericsson also got paid; his Indy 500 win earned him a $3.1 million payout from the record total purse of $16 million. And because the Indy 500 is worth double points in the standings, Ericsson skyrocketed from eighth to the IndyCar points leader as he prepares to return to Detroit this weekend and defend last year’s breakthrough victory.

The last 12 months have certainly helped Ericsson prove himself in IndyCar and the Indy 500 win earned him global recognition.

But there’s still something Ericsson wants for legitimacy.

A journalist from his hometown in Sweden attended the Indy 500 and told Ericsson he’d gone to every single souvenir stand in a fruitless search for a single merchandise item that featured the driver. But his teammates are six-time IndyCar champion Scott Dixon, seven-time NASCAR champion Jimmie Johnson and reigning IndyCar champion Alex Palou, so it can be hard for a quiet Swede to stand out.

“I use it as motivation, but also I understand when you have (my teammates). It’s so obvious I’m not going to be the one in the spotlight,” Ericsson said. “But I have a journalist here from my local newspaper … he didn’t find a single T-shirt, cap or anything with Marcus Ericsson. Pretty much every driver in the field, but not a single Ericsson thing.

“Things like that, it’s a bit annoying. Like maybe I can have one T-shirt? You know, that would be nice.”