Blair Oaks' Mitchell wraps up career with a medal 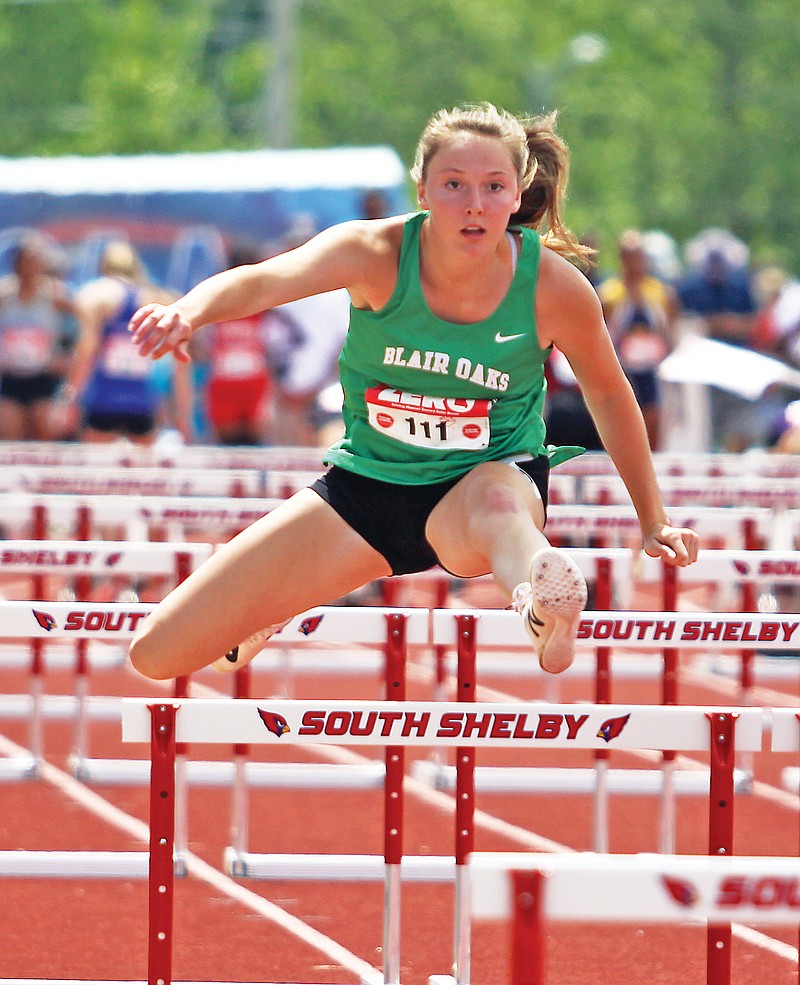 It wasn’t the finish she wanted, but for Blair Oaks senior Payton Mitchell, just making it to Saturday was the important thing.

Mitchell wrapped up her high school career with an eighth-place finish in the girls 100-meter hurdles final during the Class 3 track and field state championships at Adkins Stadium.

Mitchell clocked a time of 16.90 seconds after running 16.77 seconds in Friday’s preliminaries.

“I’m disappointed with my time, but just the fact that I’m here is what really matters,” Mitchell said. “That’s the way to end your senior year, with a state medal.”

“It’s very nerve-racking, but I knew my potential of what to run,” Mitchell said. “It’s like getting the good spot at the right time.”

Mitchell won a total of five state medals in three seasons with the Lady Falcons. As a freshman, she was on Blair Oaks’ seventh-place 4x400-meter relay, and last season, she won the state title in the 4x400 relay, placed seventh in the 300 hurdles and eighth in the 100 hurdles.

Not bad for track and field being her secondary sport.

“It’s definitely a good way to end your career,” said Mitchell, who will play volleyball in the fall at Washburn, the reigning NCAA Division II national runner-up. “It’s very nice to have that.”

Blair Oaks also had an eighth-place finish from junior Abbi Wieberg in the girls discus, and the final 60 seconds of her season were the most nerve-racking of all.

Heading into the last throw of the finals in the discus, Wieberg was in eighth place for the last all-state spot with a throw of 103 feet, 7 inches. East Newton’s Alyssa Coffey stepped into the ring for her final attempt, throwing it 104-3 to move in front of Wieberg.

Wieberg was next in the ring, and the pressure was all on her.

“I just had to take a breath when I got in there, steady myself before I made that last throw,” she said.

Wieberg flip-flopped with Coffey again, posting a throw of 111-0 on her last attempt to return to eighth place in the standings. As she let go of the discus, she said knew it was a good throw.

“You can definitely feel it, it’s a good feeling,” Wieberg said, becoming the first Lady Falcon to medal in the discus since Annette Peterson in 2018.

Starting the day for Blair Oaks were Ansley Casey, Chelsi Forck, Clara Lackman and Lucia Wilde in the girls 4x800-meter relay. The Lady Falcons placed 12th in the event with a time of 10:25.89.

Blair Oaks tied for 52nd place in the girls team standings with two points. Westminster Christian won the team title with 70 points, followed by Eldon in second with 47, McCluer South-Berkeley in third with 44 and Ste. Genevieve in fourth with 33.

Westminster Christian’s Brooke Moore was a triple-winner in the 100 hurdles, the long jump and the triple jump, while her teammate, Sydney Burdine, was a double-winner in the 400-meter dash and the 4x400 relay.

On the boys side, Westminster Christian scored 13 points in the shot put Saturday afternoon to move into first place, claiming the Class 3 state title with 45 points. Lutheran: St. Charles was second with 42 points, followed by East Newton (37) and St. Mary’s: St. Louis (35) to round out the top four.